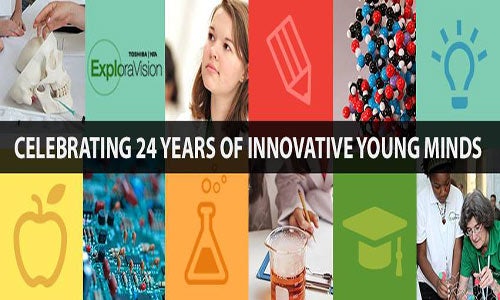 In the early 1990's, Toshiba posed a challenging question to its senior leadership: "How can we make a meaningful investment in education that will improve society through the new millennium?"

We answered that question over the last 24 years through Toshiba/NSTA ExploraVision—the world's largest K-12 science competition with over 350,000 participants. Students design, research and prototype technology to be judged by the nation's leading scientists. Winning teams have the opportunity to showcase their solutions to top Toshiba executives and elected officials.

Although we recognized the power of STEM (Science, Technology, Engineering, Mathematics) education before many of our competitors, they recently launched shiny, new competitions that reduced awareness of ExploraVision. For Toshiba, our long-standing commitment to transforming society through its youngest minds became more important than ever.

Based on demographics of past winning teams, we knew our best advocates were passionate teachers in the US and Canada who believed education existed after hours. From there, teachers fell into two categories: seasoned, influential role models who earned the trust of their administration and fresh-faced, rising stars looking to create a legacy of success. These types of educators shared the perspective that project-based STEM was the most effective way to engage and incentivize their 21st century students.

Using that knowledge, we defined two primary objectives to measure the success of our online educational impact: drive a year-over-year increase in site traffic and increase mentions of the ExploraVision competition on social media among our target audience.

This campaign spanned numerous types of traditional and new media, however our digital strategy to drive site visits and reintroduce the K-12 science community to ExploraVision began with an observational insight: seasoned and new science teachers alike congregated in niche Twitter communities to not only better prepare their students, but encourage professional development of others. That insight built the basis for our organic outreach program.

Among its competitive set, ExploraVision was the first and only K-12 STEM competition to study Twitter usage among its target demographic and launch a 1:1 grassroots outreach program that would simultaneously engage teachers in a two-way dialogue about their best lessons and then frame the advantages of ExploraVision in relatable terms.

After a brief discovery period of learning about the key influencers, the schedule of science-focused Twitter chats and the lingo used by STEM enthusiasts, we tweeted at top teachers each day asking them to explain their "classroom wins" as depicted in their Twitter photos and videos. The most notable examples included media of young girls building robots, minority students working as a team to solve a simulation and an entire gymnasium of middle schoolers engineering household accessories with community leaders. For those who responded to our questions, we then framed ExploraVision as a natural extension of their classroom.

Overall, our social team engrained messaging about the ExploraVision program within the online communities where STEM education tips and professional development thrived.

Once we captured the hearts and minds of teachers in the form of two-way engagement, we shared a variety of stories about past years' winning teachers and students to prove the power of the competition. Written stories, interviews and video content painted a picture of the far-reaching benefits ExploraVision can have in engaging bright, young minds—especially girls in STEM. Our strategic mix of paid and organic social content even spread awareness of the program beyond potential teachers to curriculum administrators.

By building relationships with socially-savvy science teachers, we found a mutually beneficial dynamic—students learned 21st century technology skills while the word about our program spread among influential educators.

From the launch of the registration page in mid August through the project deadline in early February, we welcomed 194,000 visitors to ExploraVision.org. The number of new and returning users contributed to 55% year-over-year site growth (125,056 vs. 194,000).

Google AdWords was the true catalyst in driving site views. After optimizing three pieces of ad creative, we garnered over 600,000 targeted impressions and more than 27,000 site clicks, which performed at a 4.5% CTR—four times the industry average.

We deployed Twitter hashtag targeting to reach influential science teachers where they shared resources and lesson plans. We saw a 226% year-over-year increase in Twitter mentions of ExploraVision (126 vs. 412). Three promoted tweets led to 86,576 impressions and 131 clicks. Those tweets had the longest average site visit of all paid platforms—just over 3 minutes per session.

In addition, we used daily social listening to engage science teacher communities as a way to insert ourselves into conversations organically and drive interest in ExploraVision. Those paid and organic Twitter efforts contributed to a 426% year-over-year increase in referral traffic. 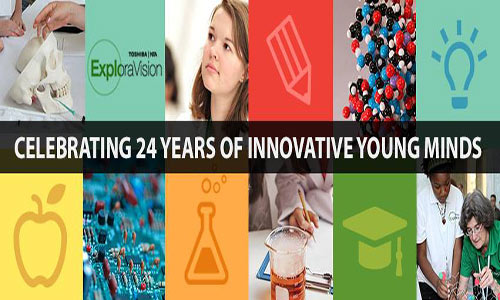