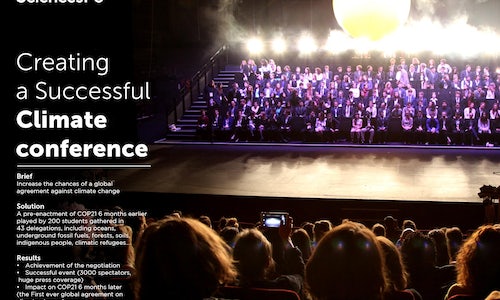 Increase the chances of a global agreement against climate change

In 2014 no one believed that a global agreement was ever possible against climate change. Almost all forerunners of COP21 had failed. COP21 was expected as the 'last chance conference'.

Our researchers working on the topic of climate conferences knew that climate negotiations had consistently proven ineffective because of the lack of common vision across negociators. The COP process simply lacked both solidarity and hope.

We knew through game theory the key role played by trust. If all players consider that success is likely, they will do their best and engage in the negotiation with the collective outcome in mind.

So we asked ourselves: how can we use our resources (knowledge and youth !) to help ? How could we increase the chances that COP21 be a success ?

The idea was to set up a climate conference. A mini-COP21 (= a large-scale simulation) that would happen prior to the real COP21.

It would be a conference where delegates would pre-enact the COP21 agenda. The number of delegations would be sufficient to create some complexity but less than in reality to allow the process to be quick and effective.

In addition to the country delegations, the simulation would include a new set of actors who don't hold a seat at the United Nations, but who have a lot of influence on the issue such as oceans, underground fossil fuel or indigenous delegations. Those actors would introduce a new mindset in the event and push conventional delegates to consider the 'common issues'.

And the student-delegates would be encouraged to agree on common future expectancies rather than to stick tightly to their initial positions.

The simulation happened in May 2015 at the famous Théâtre Nanterre-Amandiers close to Paris.

200 Students from fifty universities and schools around the world, and from all disciplines (international relations, law, architecture, economics, science and design), acted out the negotiations on stage, in front of thousands of spectators.

At the end of an intense three-day (&nights) negotiation, the students were able to hand an agreement over to the real French Ambassador for Climate Negotiations, Laurence Tubiana. This ambitious and innovative agreement was achieved after difficult discussions and numerous unexpected developments.

The students attempted- and succeeded - at finding the compromise that the 'real' actors are usually unable to obtain. A very strong message sent to the real COP21 negociators.

The simulation was a success. It attracted thousands of spectators and received extensive press coverage. Students have been deeply impressed by their experience and achievement and most of them have engaged in climate activism.

The organisers of the real COP21 could take heart in the clear message sent by students: a climate conference can succeed!

Six months later, the real COP21 happened and became the First ever global agreement on climate change. Therefore, the simulation has been a very effective event, which has impacted the real COP21, providing to its organizers and delegates an inspiring example of what they could achieve ! 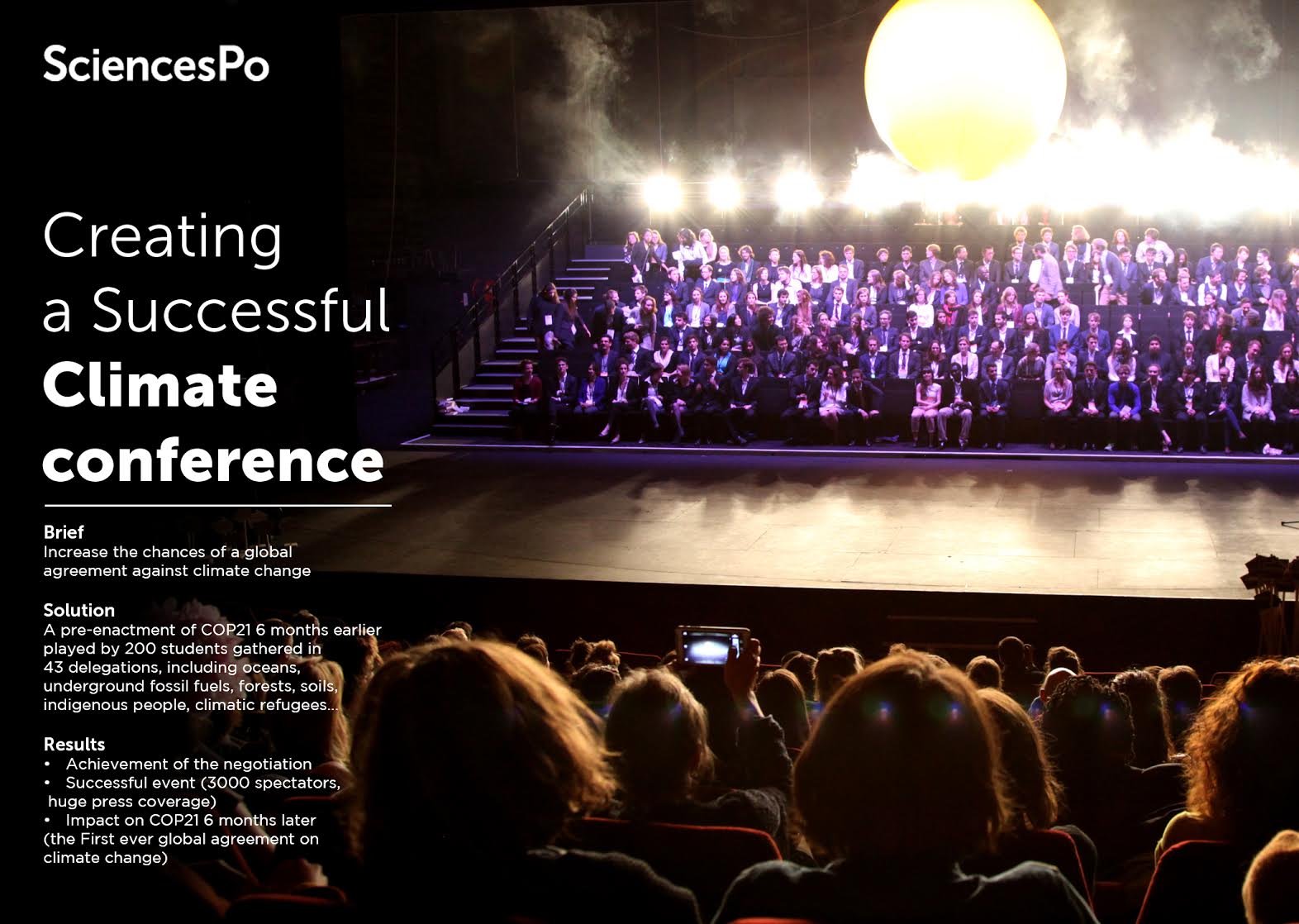