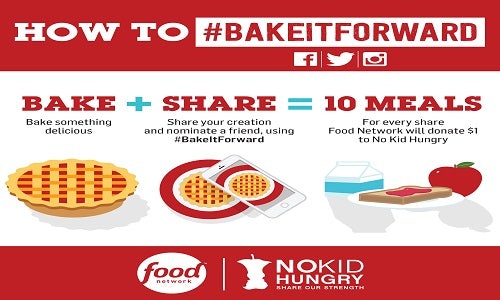 #BakeItForward for No Kid Hungry

Since 2007, Share Our Strength has been Food Network's exclusive national philanthropic partner, and together, we are committed to increasing the visibility for a largely invisible issue and ending childhood hunger one meal at a time. Share Our Strength's No Kid Hungry connects kids in need with nutritious food and teaches their families how to cook healthy, affordable meals.

Tapping into Food Network's viewer affinity for all things related to food offers the perfect platform for educating and motivating others to join our efforts to eradicate this solvable national crisis. One of the 2015 campaign elements included a holiday-driven, social media initiative - #BakeItForward – supported and promoted via a multi-platform campaign with the goal of providing 1 million meals to children in need during the holiday season, and in so doing, raising awareness for Share Our Strength's No Kid Hungry.

Aligned with the holiday season and the premiere of Food Network's Holiday Baking Championship, beginning November 1, 2015 through December 31, 2015, Food Network donated $1 to No Kid Hungry each time someone shared an image of homemade baked goods on Facebook, Twitter or Instagram and tags a friend using #BakeItForward, ultimately providing 1 million meals for kids during the holiday season. 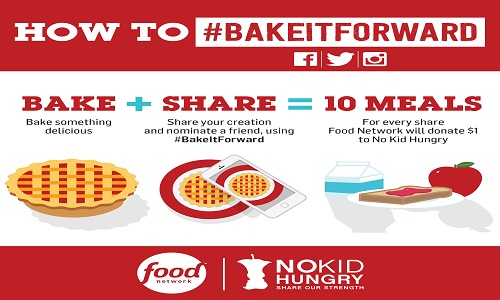