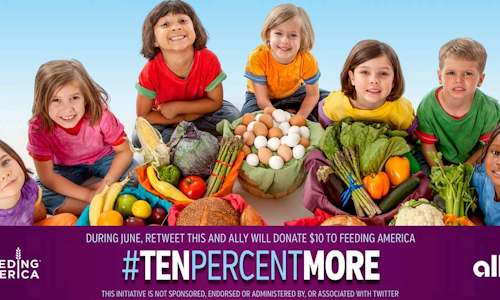 Ally Financial Inc. launched a community support initiative called "#TenPercentMore," which encouraged social media participation to help fight childhood food insecurity in the summer months. The initiative was announced on June 16, 2016, and ran through the rest of the month. Ally matched 10 percent of donations made to Feeding America, as well as donated $10 for every tweet or retweet from @Ally, @AllyAuto or @AllyBank using the hashtag #TenPercentMore and for every tracked share of the #TenPercentMore post from the Ally Auto or Ally Bank Facebook pages during the same period.

The initiative coincided with the start of summer, which is a time when many children face food insecurity while schools are closed and school lunch programs are unavailable. Feeding America is the nation's largest organization dedicated to fighting domestic hunger through a nationwide network of food banks. The #TenPercentMore campaign also aligned with a unique feature of the newly launched Ally CashBack Credit Card, which provides cardholders with an additional 10% bonus if cash back rewards are redeemed into an eligible Ally Bank account.

Social responsibility is core to Ally's culture and the #TenPercentMore initiative with Feeding America was one of the largest campaigns done to date. It was largely driven on social media to raise awareness of food insecurity, especially during summer months for children.

The premise of #TenPercentMore was that ten percent can make a big difference for our communities and for our customers. The #TenPercentMore campaign aligned with a unique feature of the newly launched Ally CashBack Credit Card, which provides cardholders with an additional 10% bonus if cash back rewards are redeemed into an eligible Ally Bank account.

There was also a customer engagement aspect to the #TenPercentMore campaign. Since Ally Financial is a leading digital financial services company that conducts most of its business online, social media is an important forum for Ally to interact with current and potential customers. We poll customer frequently to gauge how we're doing and the types of things they are interested in hearing from Ally, and one of the responses from customers is a desire to learn more on how Ally supports local communities. Since we have a strong relationship with The Feeding America network, which serves 46 million people in America including twelve million children, we felt the #TenPercentMore campaign was not only a good way to demonstrate our focus on being an ally in the community, but also a terrific way to engage others in supporting a great cause through a social media campaign.

Based on Feeding America data that every $1 donated, the Feeding America network of food banks provide 11 meals to people facing hunger (http://www.feedingamerica.org/ways-to-give/) the #TenPercentMore initiative raised funds to provide 1.375 million meals. #TenPercentMore received the highest level of social engagement of any program for the company thus far with over 1,200 combined mentions on Twitter (leading to 1.5 million impressions) and shares on Facebook. 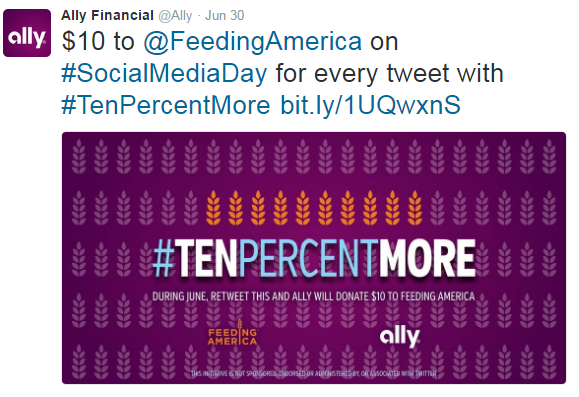 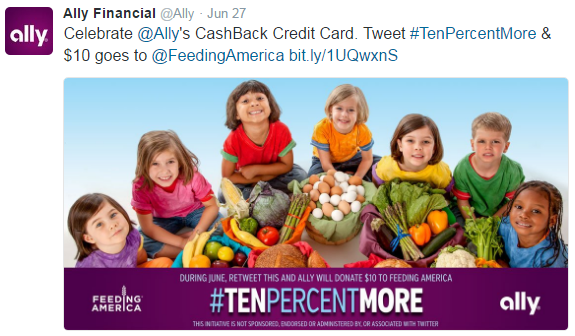