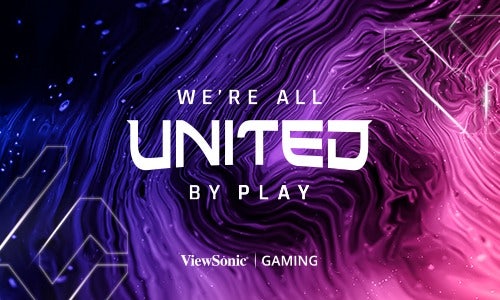 ViewSonic has been in the display business for over 30 years - offering next-level color fidelity to early PC gamers and later launching the Elite series of professional gaming monitors to satisfy even the most hardcore players.

Despite gaining greater mainstream acceptance, we discovered that certain stereotypes and toxic caricatures surrounding gamers actively deter the vast majority of game-playing individuals from self-identifying as a 'gamer'. Research by Activision Blizzard has shown that over 60% of gamers do not consider themselves to be a ‘gamer’, while less than a third even begin to resemble the stereotypical image we associate with gamers today. This results in gamers from the casual side of the spectrum avoiding gaming products out of fear of being associated with those very stereotypes.

So, by launching our Omni monitor series alongside our UBP campaign, we embraced this nuanced majority by offering them an alternative with a more reserved design, and one that wouldn’t compromise on key gaming specs. Marrying Elite and Omni under the umbrella of ‘ViewSonic Gaming’, we positioned ourselves to cater for the entire spectrum of gamers, while staying true to the idea that: “No matter why you game, we’re all United by Play”.

Hence, the ultimate objective of the UBP campaign was to generate awareness and bolster consideration for ViewSonic Gaming by celebrating the diverse spectrum of players and acknowledging their motivation for playing. By championing this representation, we wanted to push back against the negative gamer-related stereotypes and encourage players to openly embrace gaming.

Our slogan, “No matter why you game, we’re all United by Play”, was at the core of all our marketing efforts.

We started by creating a global website to act as the flag-bearing home of the UBP message, while also serving as the central landing page for most of our subsequent activity. ViewSonic Gaming’s social arm got to work producing engaging content and cultivating a global audience of like-minded people to stand behind UBP’s values.

The ‘United by Play – Battle for Charity’ was the first high-impact activation – a Valorant tournament held at the HyperX Arena in Las Vegas to coincide with CES, and featuring guest influencers (i.e. streamers, pro players, college players) who joined hands to raise money for several worthy children’s charities including: 1000 Dreams, Starlight Children’s Foundation, BGCA, and more.

We worked with an independent production company: ‘Two Kids with a Camera’ to produce United by Play’s hero videos (the primary driver of our message) and an original docuseries which showcased gamers around the world who defied the original meta to go ‘Beyond the Game’ (e.g. beating Halo with a guitar controller or making a desk galloped for more immersive horse-riding). Both productions were centered around a montage of colorful personas depicting people of varying age, gender, ethnicity, and occupation - with each individual giving a statement on why and how they game. In taking this inclusive approach (underlined by light humor and irony), we wanted audience members to be able to see a part of themselves being reflected across these personalities, through either a demographic and/or motivational lens.

Digital activity focused on pushing the hero video via multiple channels (i.e. FB, IG, YouTube, and Programmatic/CTV) for ViewSonic’s key growth markets across Europe (e.g. United Kingdom, Germany) and Asia (e.g. India, Philippines). We compiled a custom combination of Interest, Behavioral, and Intent-based gaming audiences for each channel and tested alternative cuts of the hero asset against each permutation. Rather than blindly focusing on pure reach/impressions, we staked our success on Completion Rates and cost-efficient CPCVs as a means of 'verifying' people’s engagement and consideration in the face of a tempting option to skip each ad. We also experimented with Rich Media formats – combining the hero video with an interactive questionnaire to ask viewers about their gaming preferences. Once a selection was made, a corresponding model’s promotional video was shown – highlighting the specs most relevant to the viewer's chosen genre. From there, a mini-landing page summarizing the model’s key features would direct users to the ViewSonic website to either learn more or find the nearest retailer.

We then wrapped everything up with the United By Play Awards - spurring mass community engagement by asking fans to showcase their best gaming moments and share ‘why [they] game’. Entrants were incentivized with the chance to win gaming monitors from our Elite and Omni series, and boy did they deliver!

The overall campaign was a massive success – not just in terms of reach and awareness, but for generating engagement and consideration.

The United by Play Battle For Charity event captured over 5.4 million Impressions and earned a total watch time in excess of 169K minutes, raising over $40,000 for charity.

In less than a month, Programmatic video ads reached 900,000 unique individuals over 875,000 households, for a total of 2.1 million Impressions - averaging a 78% Completion Rate. Our interactive video questionnaires earned a strong Completion Rate of 70% over 607K Impressions, with over 5,443 respondents.

On YouTube, our hero videos obtained a robust overall View Rate of 44% (despite being skippable), at a super efficient CPV of $0.006. For the docuseries, (again giving viewers the option to skip) a staggering 55% of audience members decided to continue watching beyond the 30 second mark - despite these being long-form assets.

ViewSonic Gaming’s social channels reached over 24.1 million unique users across Facebook and Instagram - garnering over 11 million post engagements. Finally, the United by Play Awards delivered something truly special. Although we initially expected entries to consist of home-made memes and ‘clutch gameplay’ videos, many contestants were taking inspiration from our aforementioned docuseries, and taking their shot at high-quality in-game photography and other unconventional means of going ‘beyond the game’. This ironically prompted us to check our own assumptions about gamers; but ultimately, it's safe to say that our unconventional gaming TA resonated with the UBP message. 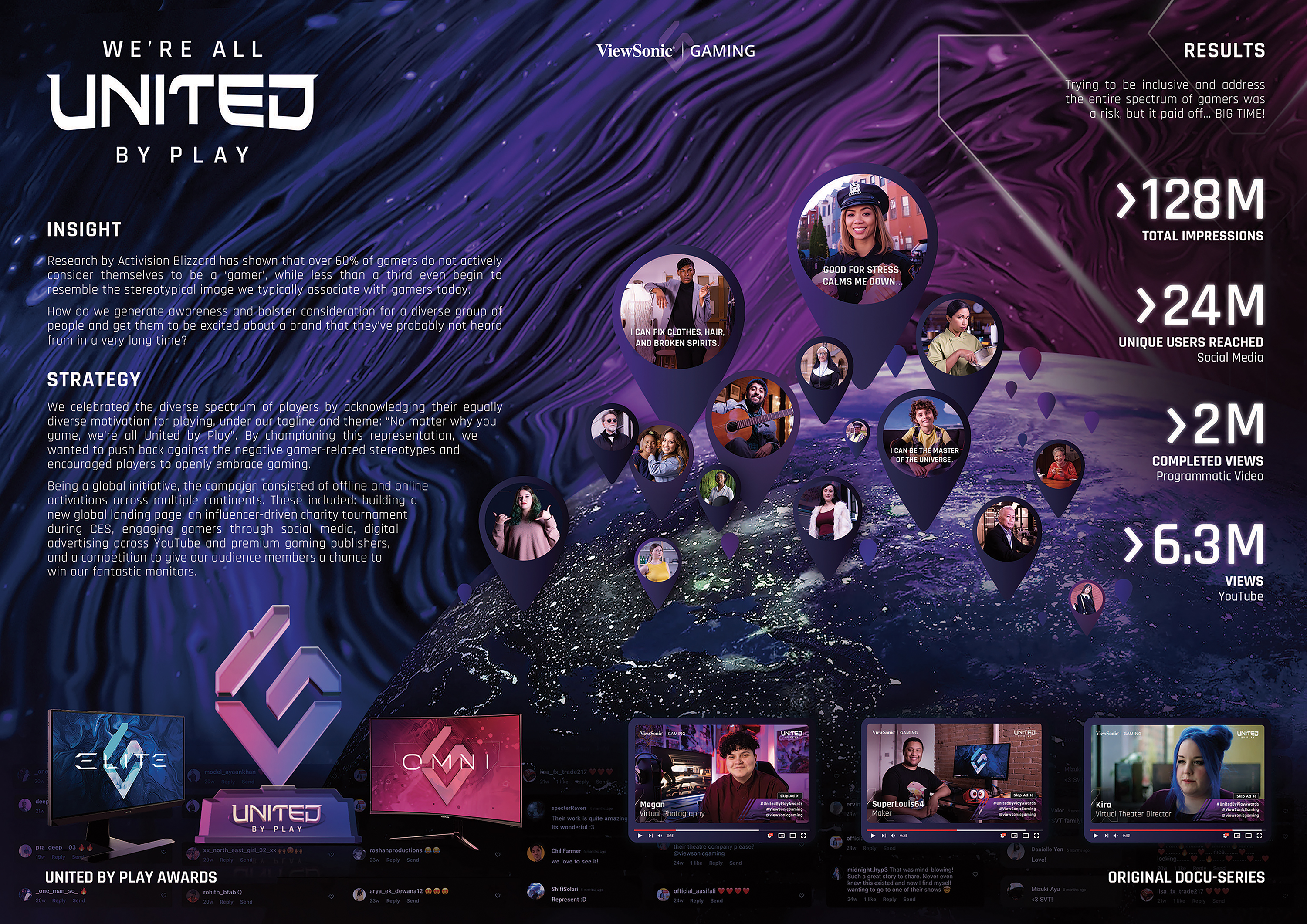 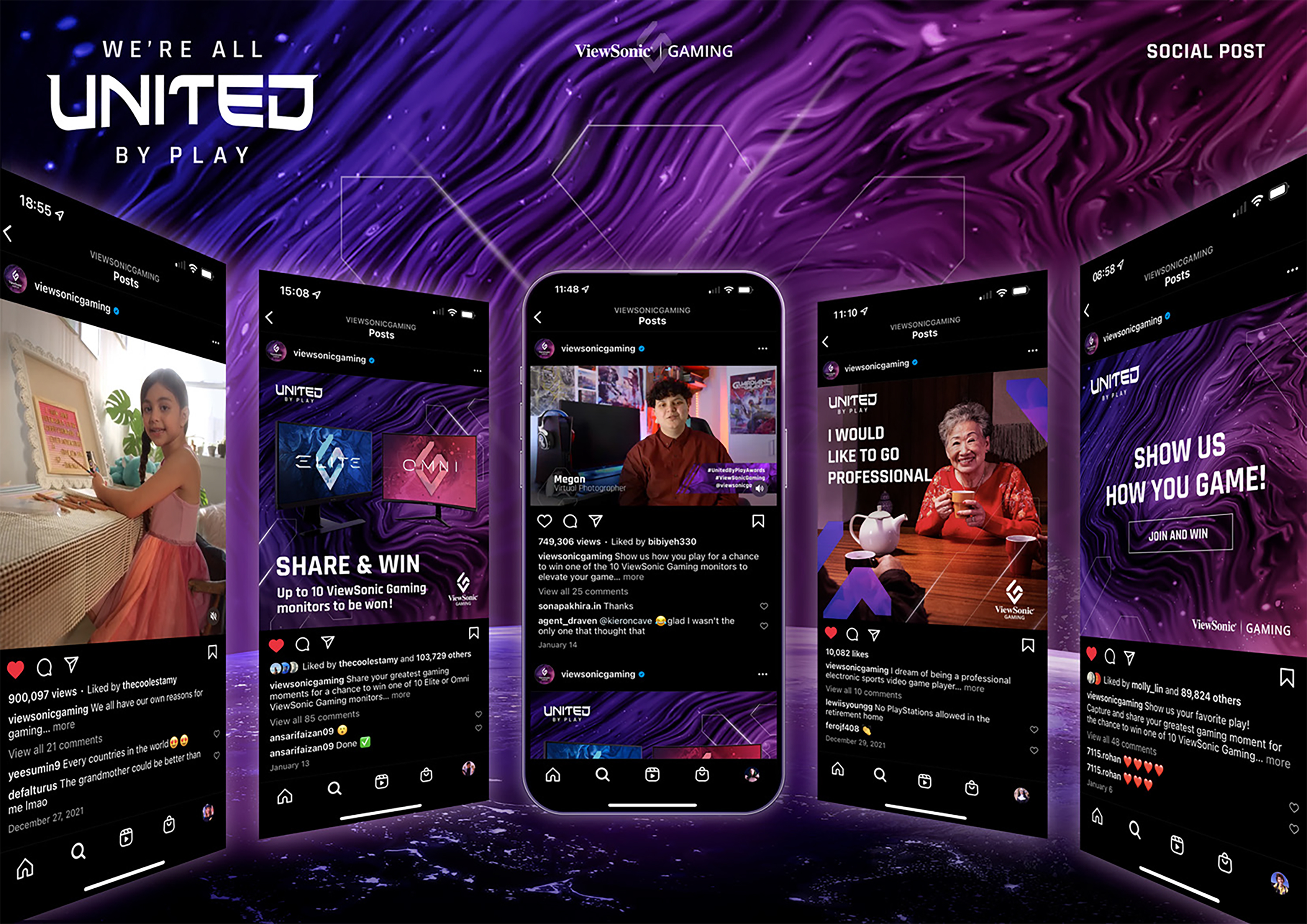 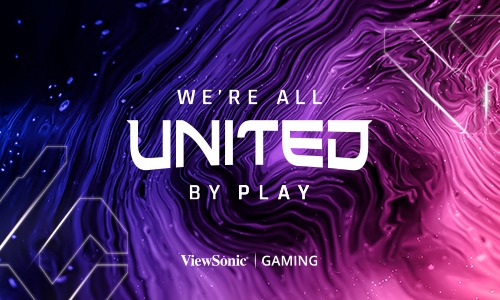