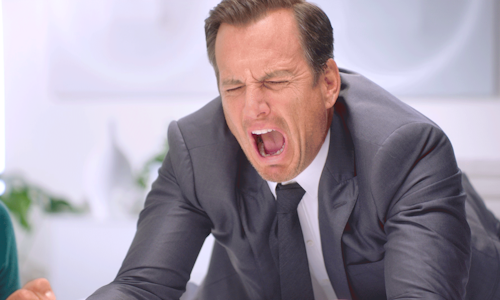 In a market dominated by slow-to-innovate, legacy platforms, commercetools’ solutions are fit to support customers today and for generations to come. As the inventor of “headless commerce” commercetools empowers businesses all over the globe with the ability to be agile and sell wherever customers are. This is a stark contrast to the inflexible legacy platforms which constrain innovation, impede responses and limit revenue generation. Despite that distinction, the market is crowded with either large, known players that rest on brand recognition, or new players that lack truly advanced technology. commercetools needed a campaign that distinguished them in the industry as innovation provocateurs and leaders in commerce technology.

As recognizable names and longtime defaults, legacy commerce platforms can be perceived as a safe financial choice to non-technical decision makers. commercetools sought to correct this misperception by stripping away jargon-related barriers. They charged Walker Sands with creatively raising awareness and establishing credibility with business decision makers. More specifically, commercetools looked to Walker Sands to:

In conversations with commercetools’ leaders, Walker Sands learned that legacy commerce platforms were leaving business leaders feeling trapped and unable to keep up with consumer demands — presenting a clear opportunity for commercetools to address a pain point via campaign communications.

This insight underpinned what became “The Naysayer,” the campaign’s creative concept, which was designed to emphasize the often-ignored tyranny of legacy platforms while underscoring commercetools’ uniquely flexible, open approach to commerce. The creative would personify legacy commerce platforms as an insufferable, inflexible “Naysayer,” shooting down ideas and savoring stagnation. Like legacy platforms, the Naysayer shuts down exciting plans for better, more modern commerce experiences. The campaign would then position commercetools as an agile, “yeasaying” solution. The creative invites decision-makers to embrace next-generation commerce and kick dated platforms out of the boardroom.

Walker Sands proposed a video-centric activation plan that would leverage comedic celebrity talent (Will Arnett) as the Naysayer to draw eyes to the campaign and instantly boost commercetools’ credibility in the market. Activations across paid, earned and owned channels ultimately stood out in a sea of B2B buzzwords and stock assets by ditching jargon and the traditional B2B playbook, and embracing scroll-stopping quips.

The campaign’s launch was timed to coincide with OMR, a European conference at which commercetools drove awareness via venue signage and hyper-focused OOH buys targeting event attendees. Walker Sands simultaneously deployed strategic digital, social and PR activations that expanded the campaign’s reach globally, with a focus on the United States. The Naysayer also took form through a new, status-quo-craving Twitter account and the The Naysayer’s Guide to Business blog series.

While structured around OMR, the creative production timeline meant that final assets wouldn’t be ready in time for Shoptalk, a premier retail conference at which commercetools needed a presence. To meet this need, Walker Sands also created a “Naysayings” sub-concept designed to exist on its own while teasing the larger campaign. Excuses from The Naysayer covered Las Vegas during the conference, including airport ads, billboards, venue signage and taxi toppers. With legacy-tech negativity plastered across the city, commercetools’ booth offered a welcoming, yeasaying solace.

After being inundated with the Naysayer’s excuses and rejections at conferences or online, campaign creative directed audiences to commercetools’ booth or landing page, where they were greeted with the transformative power of “yes.” For social and event activations, Walker Sands applied the freshly launched bright commercetools brand palette to the “yeasayer” as an inverse to the Naysayer’s dark, brooding visuals — cementing commercetools’ status as a partner that empowers new possibilities.

Almost immediately, the Naysayer campaign gained traction in retail circles and beyond, receiving positive feedback from peers, clients and even competitors. Within the first 24 hours, brand conversations spiked over 3,200%. Campaign content boasted a 95% positive brand sentiment on social media and generated enough buzz to propel commercetools’ social share-of-voice from 0.4% to 4.2%.

On paid channels, the payoff of outside-the-box B2B marketing became even more evident. On the first day, the video gained 1.5M impressions and a nearly 30% engagement rate. And viewers weren’t just scrolling past. On YouTube, campaign videos earned a 55% completion rate on the first day.

To date, the campaign is delivering against the goal of improved brand awareness, as evidenced through results over a six-month span:

Video for The Naysayer 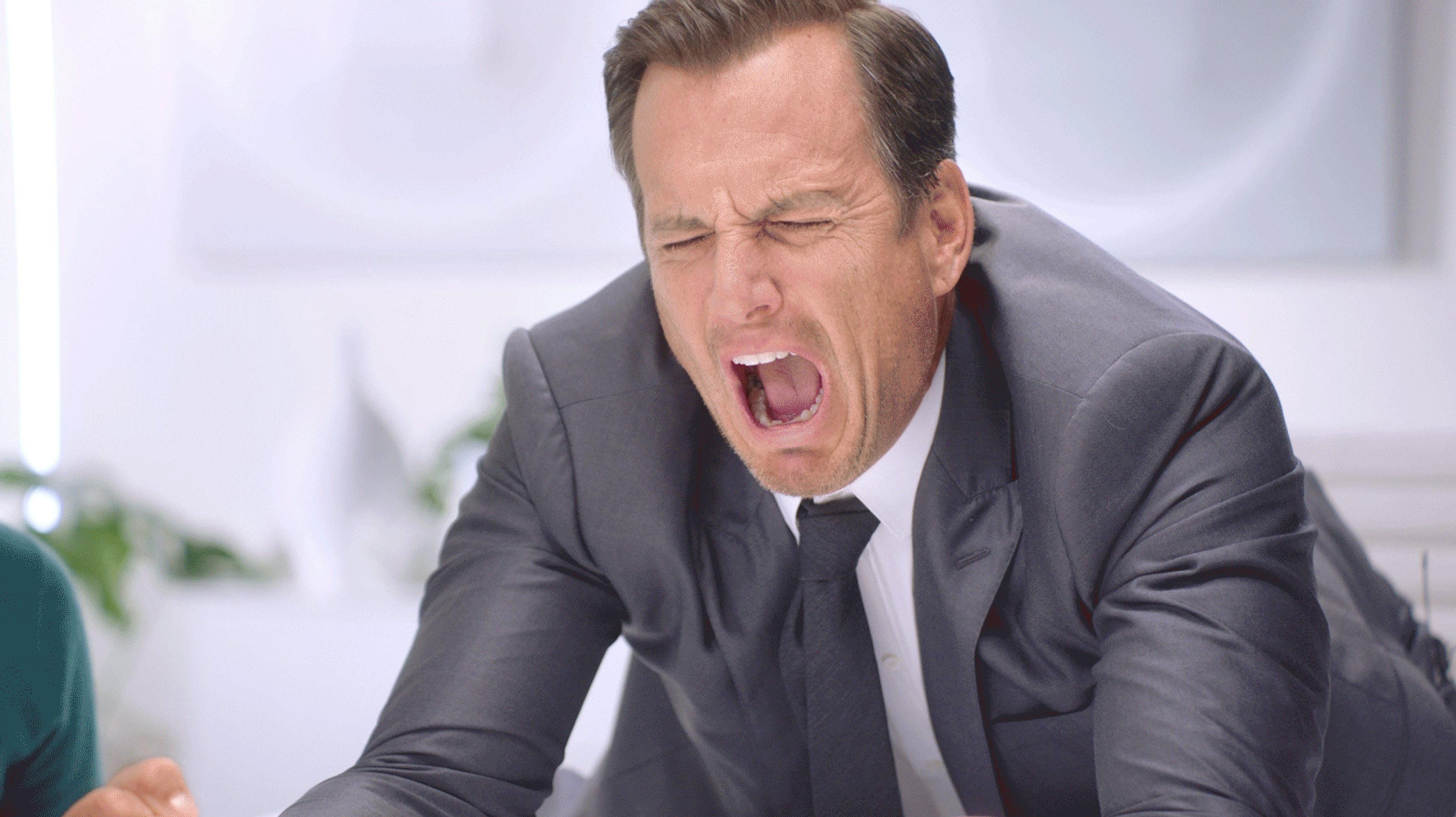 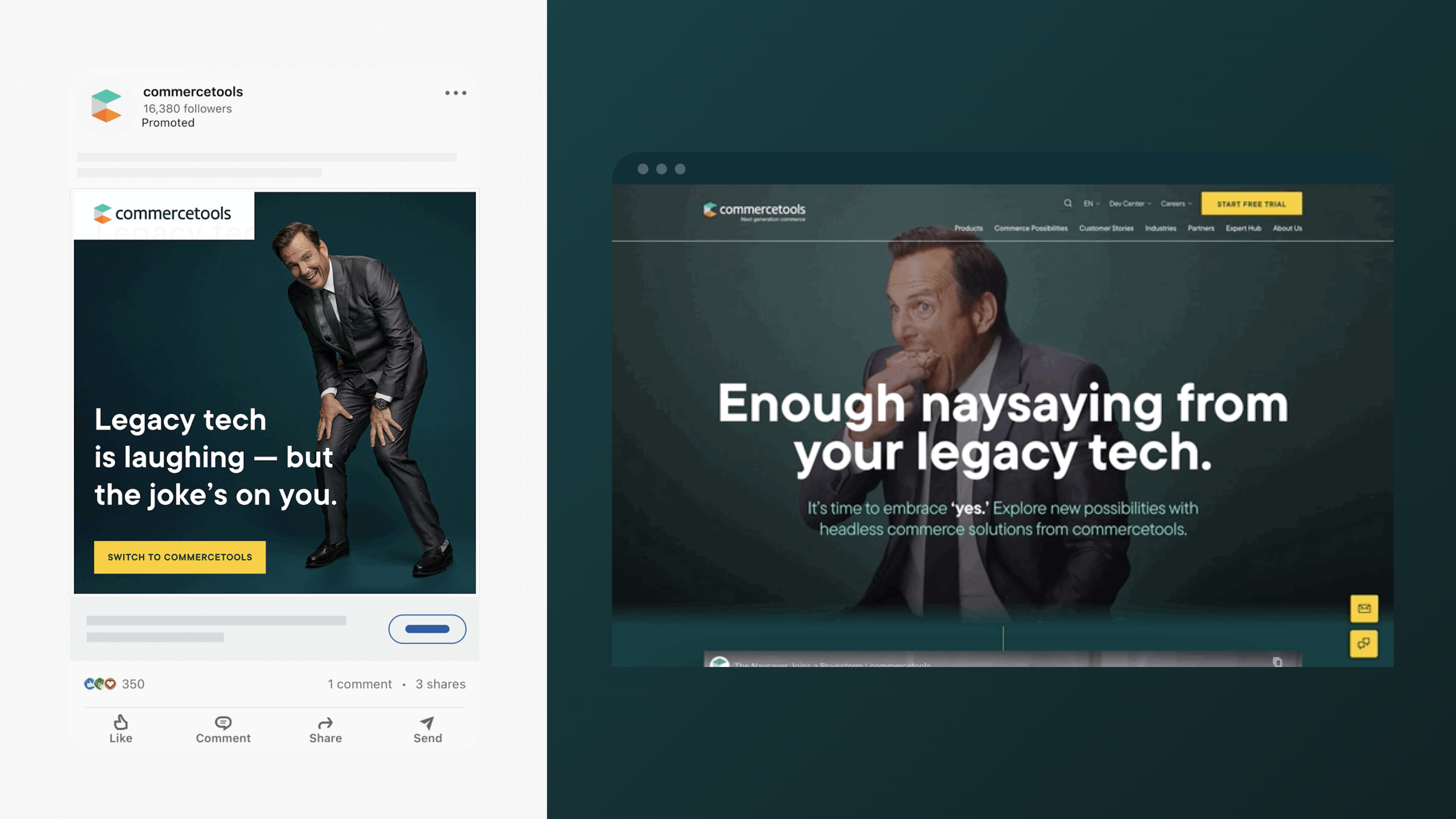 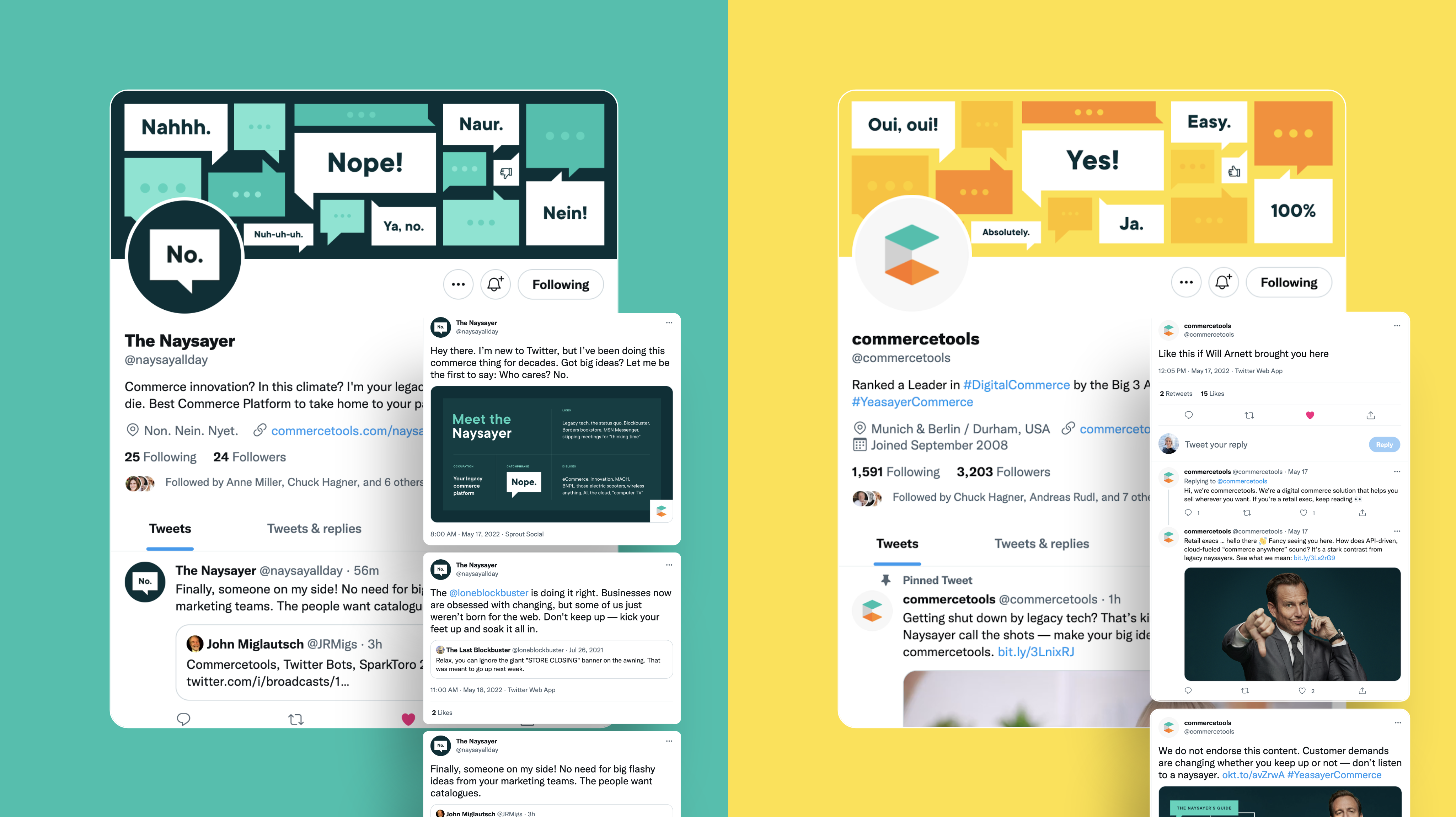 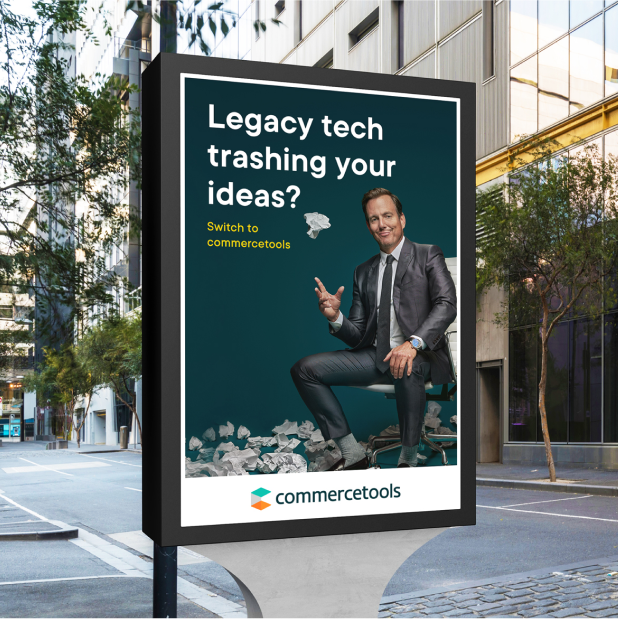 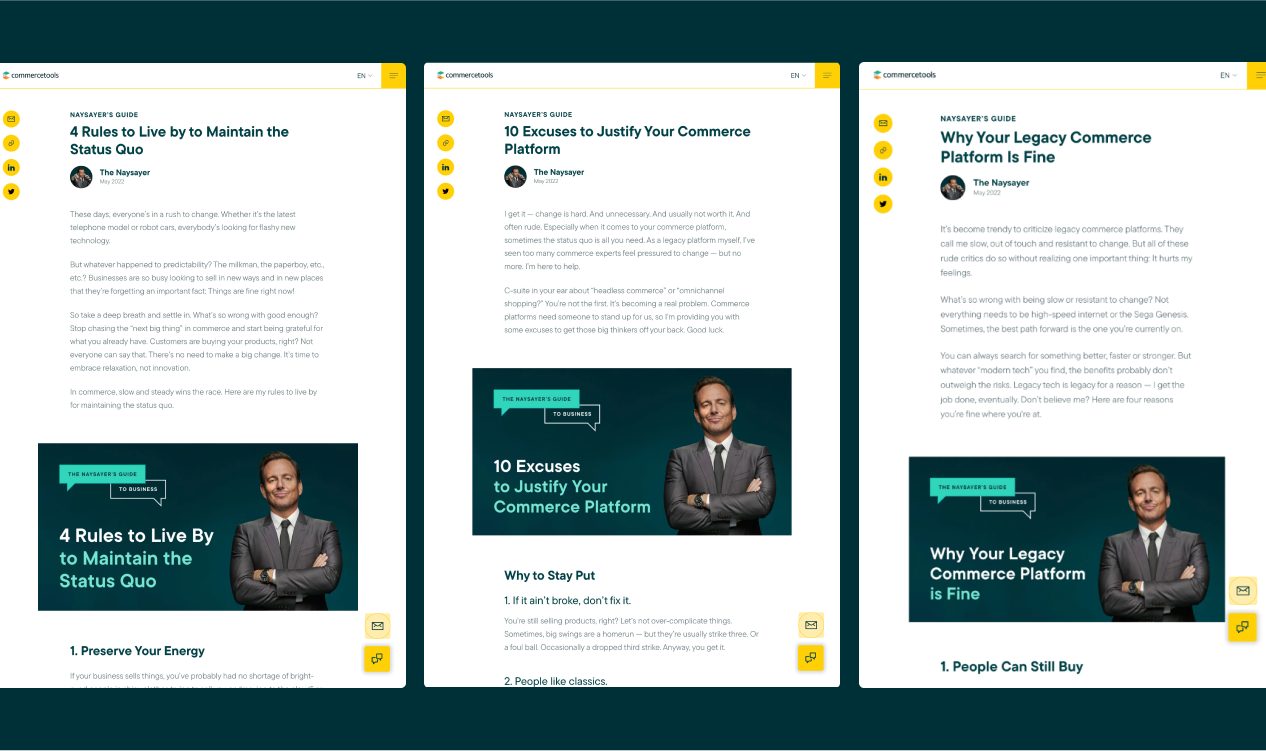 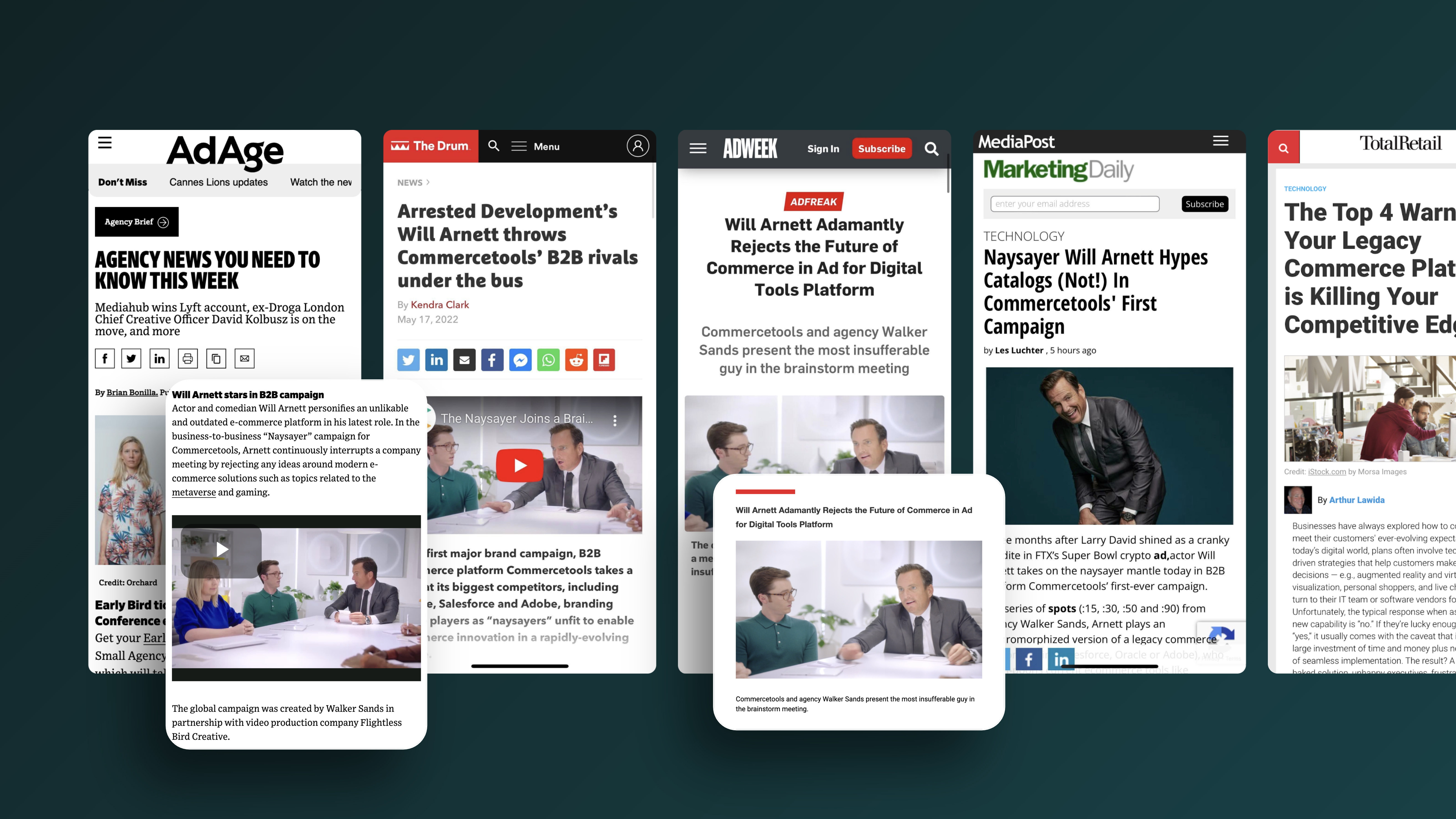