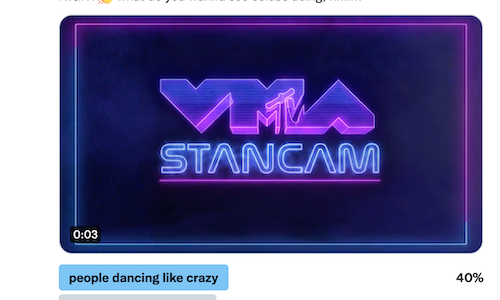 For two years, the VMA Stan Cam flipped the switch on awards show co-viewing experiences with a first-of-its-kind formula: We poll it, you pick it, we stream it. Putting fans in the drivers’ seat gave them the power to decide which exclusive backstage cameras MTV would feature LIVE on Twitter broadcasts - from VIP audience cams, to celebs mingling behind the scenes.

For year three, we were excited to develop new ways to innovate the Stan Cam experience. With help from our partners at Twitter, we examined historical data, and a clear pattern emerged: tweet volume about the VMAs was growing increasingly multilingual - 48% of Tweets in 2018, and 65% of Tweets in 2020 were non-English. The path for evolution became clear: it was time to build a globally inclusive social experience for music fans.

After two successful years of VMA Stan Cam, we wanted to evolve the second-screen experience and intentionally create a space for a more global audience.

To connect our global fans with talent at the show, we partnered with Twitter to create #VMAStanMail, a first-of-its-kind, real-time tweet translation experience for VMA talent. Backstage at the show, we built a physical experience that displayed a custom-curated wall full of adoring fan tweets from around the world. Each tweet translated from its originating language to the artist’s preferred language as they viewed it. For the first time at the VMAs, multinational artists and fans could connect like never before. Not only were these moments streamed on Twitter, but we clipped out the talent’s reactions and tweeted them directly to the featured Twitter user to ensure they were a part of the experience.

In advance of the show, the VMAs Twitter account built awareness of the VMA Stan Cam and #VMAStanMail by tweeting teasers & calls to action, asking fans to share why they loved their favorite artists. And for the first time ever, the VMAs tweeted in multiple languages, engaging fans around the globe in their language of choice using the hashtag #VMAStanMail.

While we approached the 2021 VMA Stan Cam with a goal to expand globally & connect artists with fans around the world, we were blown away with the results. 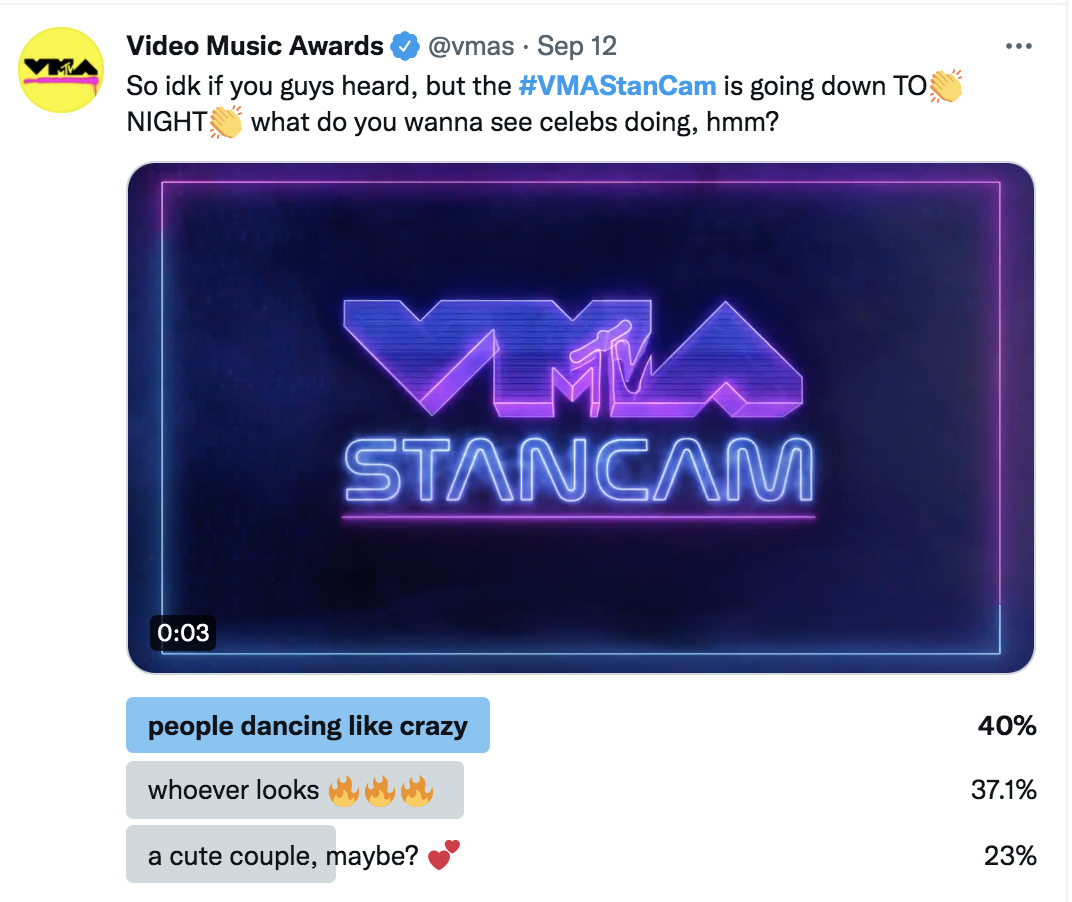 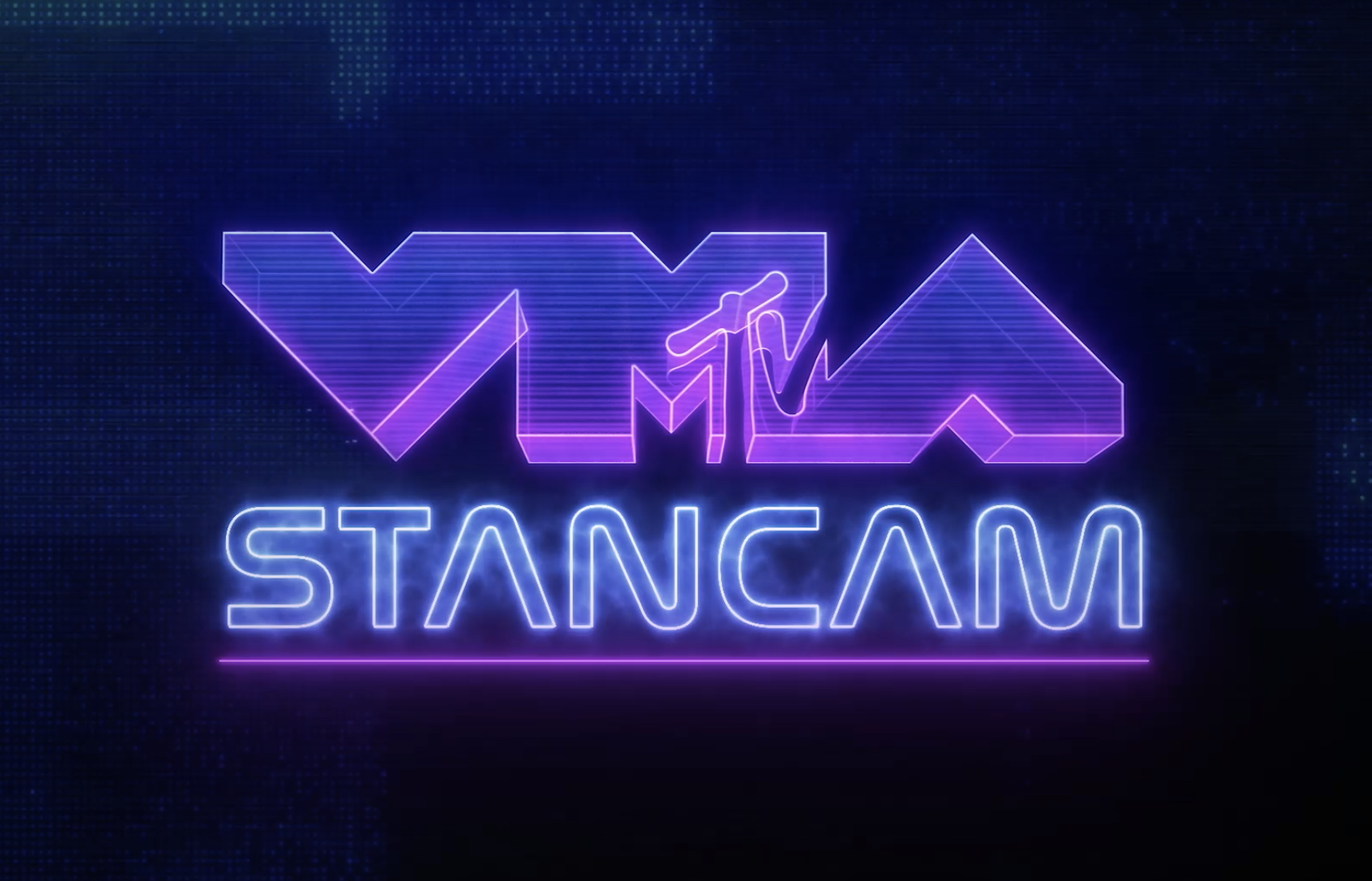 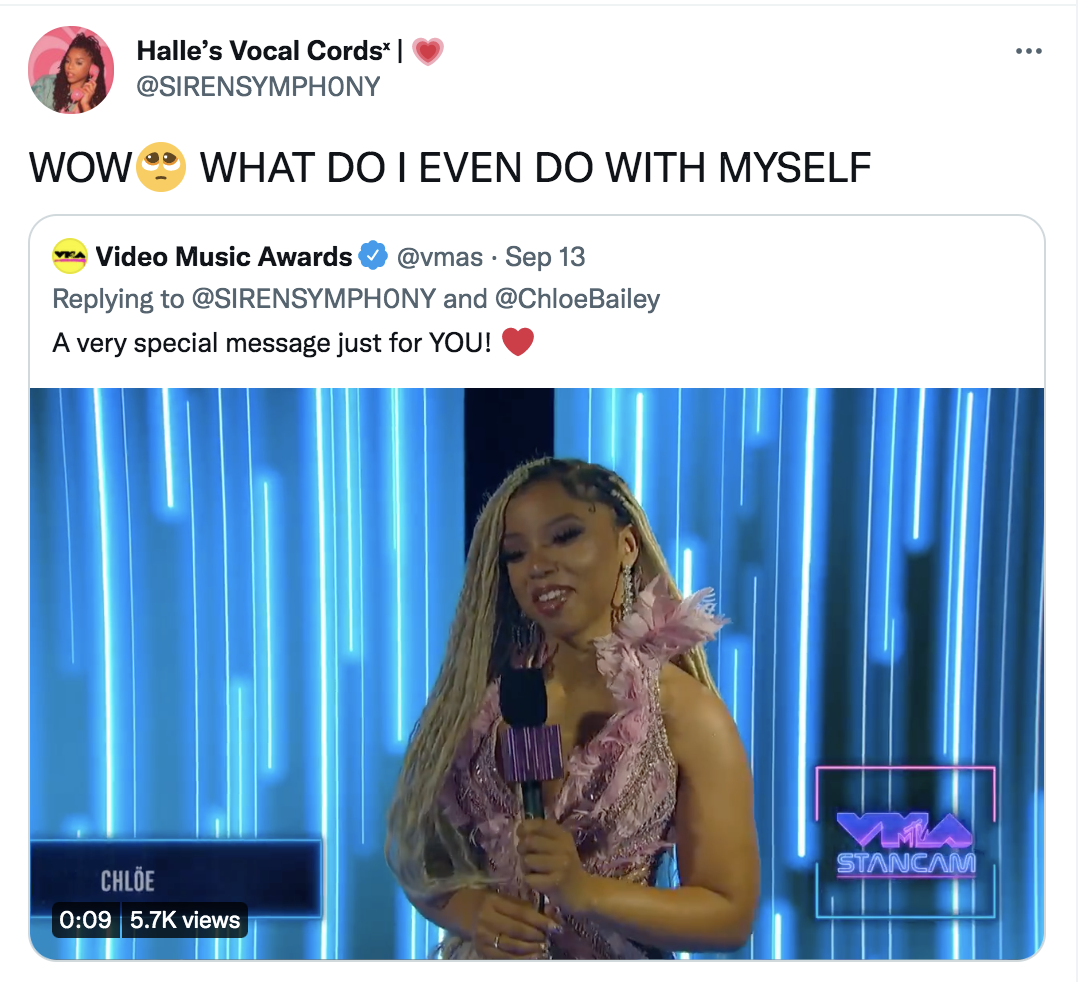 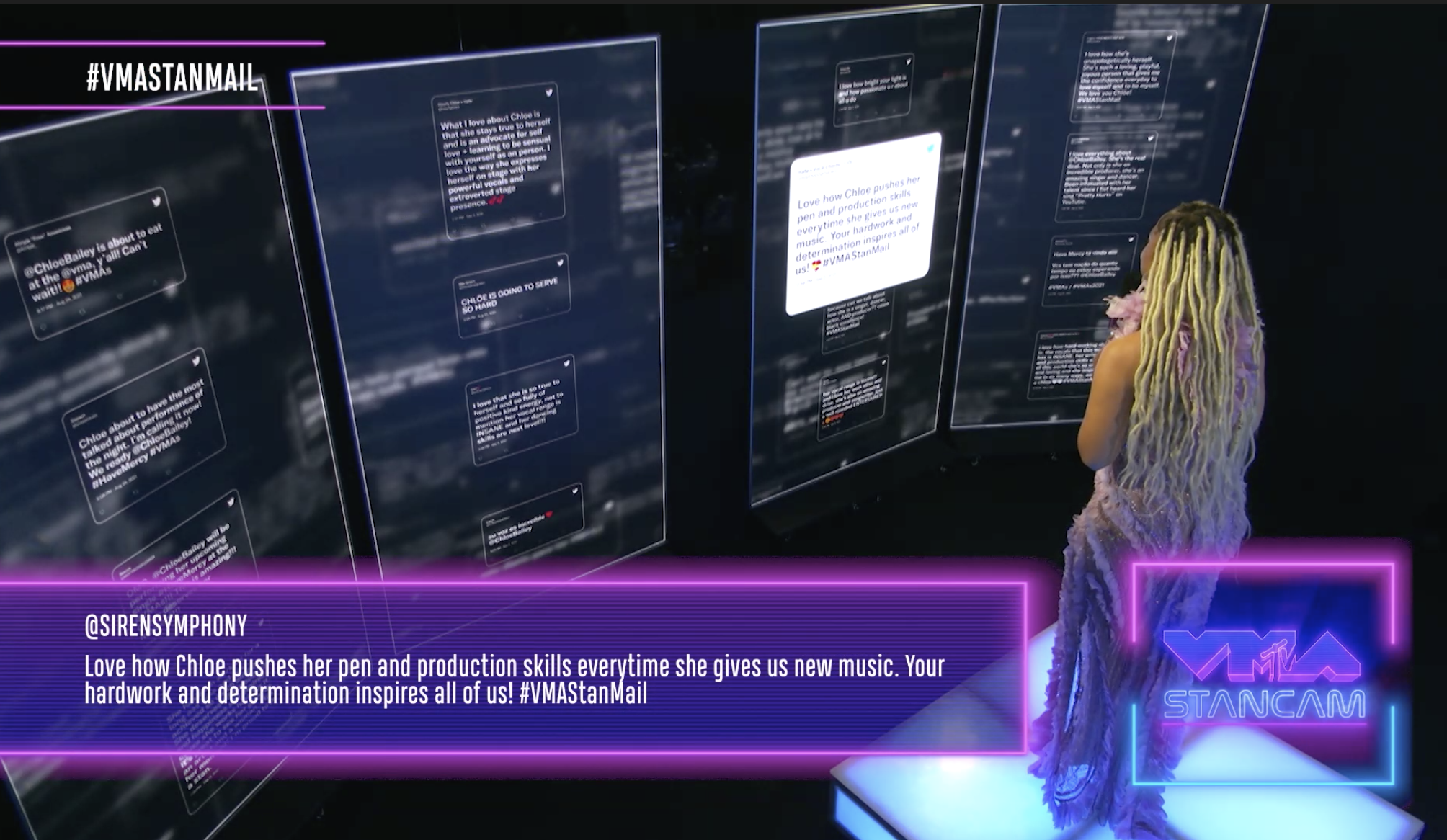 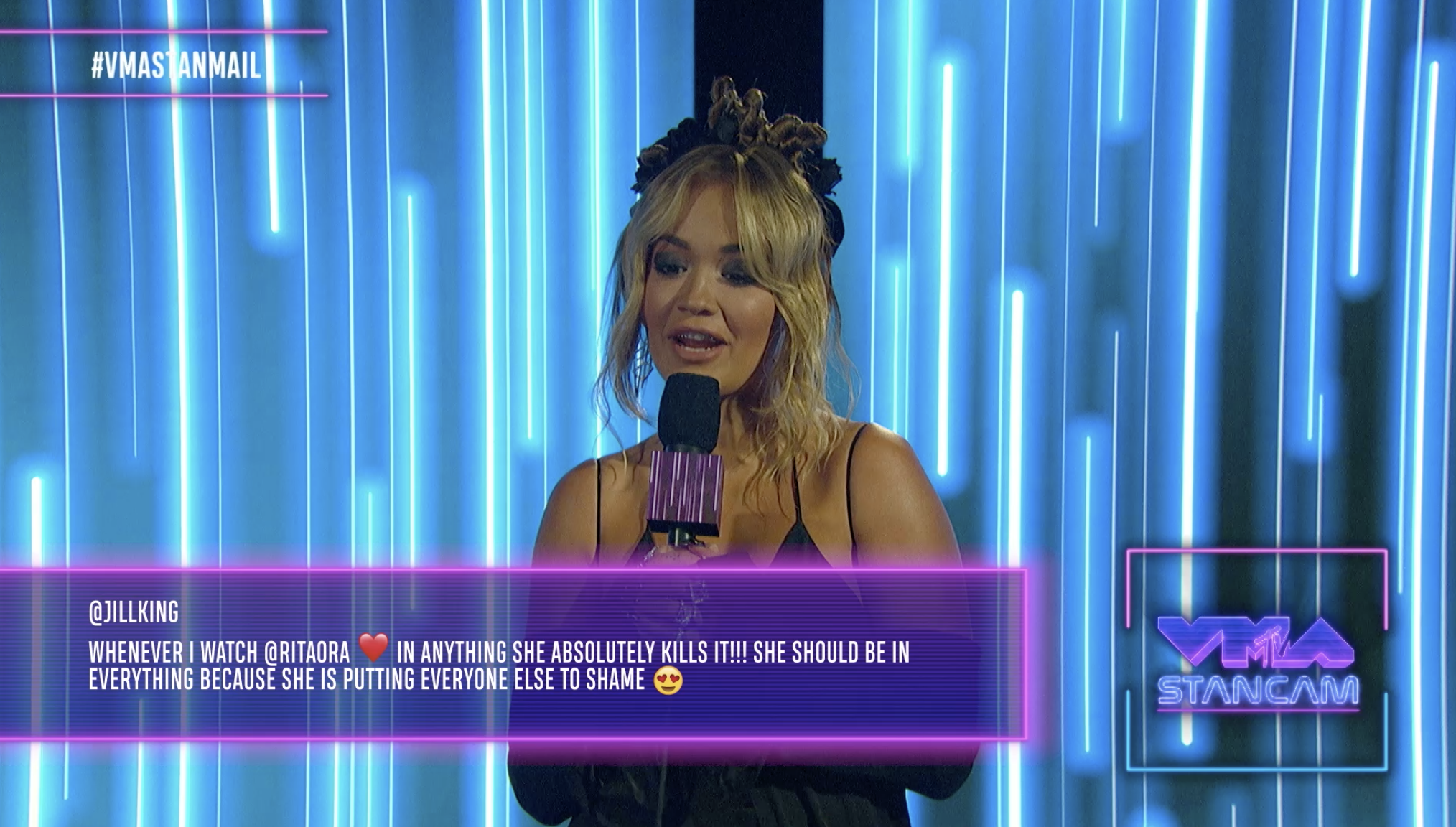