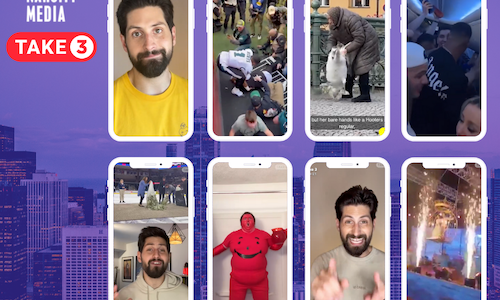 Narcity Media’s newest brand, Take 3, was first launched as a vertical video series in January of 2021. Every 3-minute episode is a round-up of the funniest, weirdest, and most interesting viral videos from around the Internet presented and commented on by host Alex Melki. Designed to engage its Gen Z and Millennial audience with humour and fast-paced presentation, it is fully optimized for mobile viewing. Our specific goal was to create a global brand that would appeal to our key demographic in an informal and fun manner. Inspired in part by America’s Funniest Home Videos, the idea was to leverage the comedic talents of the host to package the hottest viral videos in order to create a show that viewers would want to share with their friends in their group chat.

The strategy was straightforward: combine the virality and variety of trending videos online with the wit and humour of our host Alex Melki. Funny commentary had already been Alex’s niche for years on another one of Narcity Media’s brands, MTL Blog. In order to reach a global audience, we needed to move beyond local content and tap into the vast reservoir of content online that would appeal to viewers everywhere. Take 3, as the name suggests, was designed to entertain by telling three stories in three minutes. Underpinning the format was the assumption that the technique known as the Rule Of Three often used in writing and marketing would help make it more digestible for a distracted audience who may be inclined to watch the entire video if they know they’ll be served three distinct ideas or themes.

The very first challenge we faced was finding the right tone and mix of viral content to stitch together into a cohesive episode. Our story selection process morphed over time and we experimented with making thematic episodes when possible. The order of stories also became a challenge. How to pick a story that would grab the audience off the top, but also tease a story that would inspire them to watch till the end? Through trial and error, we developed a few formulas that resulted in some major hits, including one episode on Snapchat Discover that was viewed 2 million times.

Thankfully the raw material, in this case, viral videos or UGC content, is virtually never lacking. Occasionally we ran into copyright or licensing issues with the likes of ViralHog and other entities that buy viral content. Generally speaking, giving credit to the creator or getting permission directly while adding our own commentary and creating a value-added viewing experience for our audience has allowed Take 3 to thrive.

Initially launched as a vertical video series on Narcity Media’s existing social accounts, Take 3 now lives on its own dedicated accounts. Full episodes of the format also appear twice weekly on Snapchat Discover. A daily 60-second version of the format now appears five days a week on TikTok and IG reels. Since its inception, Take 3 has produced more than 60 full episodes and garnered more than 7 million views and nearly 50-thousand subscribers and followers. What began as a series is now a standalone brand with growing viewership and reach on all platforms. In 2022, Narcity Media plans to launch Take 3 on YouTube and develop a longer form offering of the format with the goal of full 22-minute episodes for a streaming platform and Smart TV. 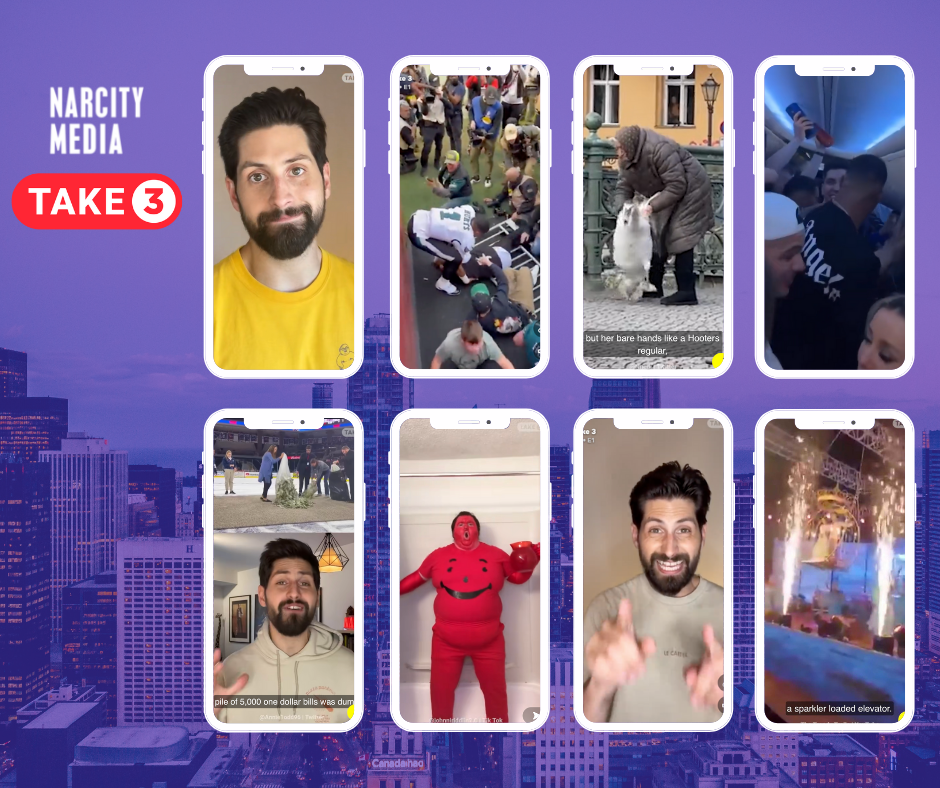