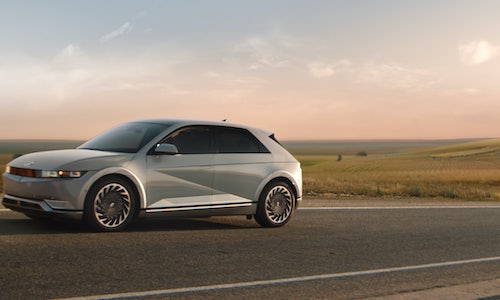 Hyundai planned to launch its first all-electric IONIQ 5 in late 2021. While already having the widest range of electrified vehicles, Hyundai does not get credit for being a leader in this space. The IONIQ 5 was our chance to shine a spotlight on our electrification innovation for a mainstream audience.

For Hyundai’s film integration partnership with Sony, we chose to bring the product into the Marvel Cinematic Universe and embedded the vehicle into the actual storyline of the Spider-Man trilogy. We then created a story within that which made the Hyundai IONIQ 5 integral as it surprisingly comes to the aid of the web-slinging superhero.

Our research uncovered that first-time EV buyers uncover ‘hidden gems’ of their vehicles after they’ve purchased: they love the high-tech features, a quiet environment, quick acceleration and the new electrified lifestyle that adds to their quality of life.

Our challenge in the launch of the IONIQ 5 was to expose these hidden gems to the mainstream.

To draw mainstream attention to Hyundai and the first-ever IONIQ 5, we brought the IONIQ 5 into one of the Marvel cinematic universe’s most iconic franchises: Spider-Man.

We separated IONIQ 5 from the overplayed environmental message of EVs by leaning into the vehicle’s technology–one of the hidden gems uncovered in research. This was a natural fit with the Spider-Man franchise, where innovation and intelligence enhance Spider-Man’s superpowers. This would also appeal to our EV target audience who are technology lovers who use tech to improve the world around them.

This led to our strategy of “Advanced technology that enables you do the extraordinary.”

In collaboration with Spider-Man director, Jon Watts, we worked to create a commercial that looked and felt like a scene from his movies and bridged the storylines from the second film to the upcoming third installment, Spider-Man: No Way Home. We used the vehicle’s key feature—its impressive electric range—to help Spider-Man in the one place he actually really needed it. Then we filled the commercial with Easter eggs to create a piece of content that fans were clamoring for and millions searched frame-by-frame for clues on what was to come in the most highly anticipated movie event of the year.

Overall visits to H.com were significantly higher in December as a result of the Spider-Man media partnership. Of the ~535K total visits, ~301K was attributed to the social campaign. This yielded 194% (compared to Oct) and 81% (compared to Nov) MoM increases.