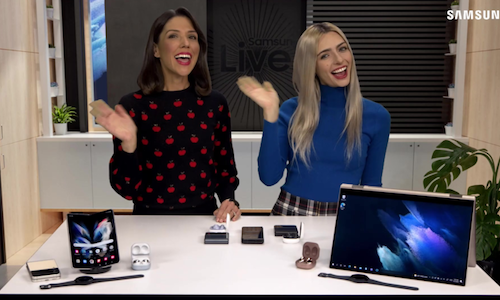 Samsung announced their new Z Flip3 5G and Z Fold3 5G foldable smartphones on August 6, 2021. We pitched live video commerce to Samsung that same week with the hopes of supporting these new innovative phones as early as mid-September.

Live video commerce events have popped up sporadically in the past few years as brands and retailers look to innovate in the space. The problem is, the majority of these are one-off livestreams heavily marketed with influencers to drive a bump in sales. We thought there was a better way – to not just generate a bump, but to create a consistent connection to consumers and drive purchase.

Our goal was to redefine the Samsung Mobile purchase experience by creating a weekly shoppable livestream that meets consumers that are ready to purchase where they already are – on Samsung.com.

The objective was to increase intent and purchases from warm audiences within the consideration phase. By featuring frequent, smaller sales every week, this reoccurring livestream would effectively bring them into the purchase cycle, increase overall awareness, build brand affinity and offer product education opportunities, making Samsung Mobile top of mind for larger, future purchases.

Ultimately, we wanted to create the most convenient, informative and rewarding place to purchase Samsung products via shoppable livestream, combining exclusive offers with engaging hosts and compelling content.

We won the project the second week of August with one very big caveat – to launch this new endeavor the same day the Z Flip3 and Z Fold3 launched … on August 27. So we got to work. And fast. We hired an experienced showrunner to start writing a script, a producer to find talent and a studio to shoot in, and put a creative and account team in place to build the entire show from the ground up in 17 days. And this live commerce project needed a name, so we gave it one: Samsung Live.

SELLING SAMSUNG IS THE SHOW

We would need to naturally integrate the Samsung Mobile ecosystem in each and every aspect of Samsung Live because conversion is what live commerce is all about. Selling Samsung is quite literally the whole show, featuring Samsung devices, product education, and relevant storytelling for why each smartphone, pair of earbuds or smartwatch matters to consumers. Getting viewers into a purchase cycle with smaller, more frequent sales on a weekly basis ultimately paves the way for this new phone launch.

While “best practices” is an evolving term for US-based shoppable livestreams, it’s important to note it goes beyond just having the right technology to host a successful stream. Global stage “best practices” have been more solidified, but it’s not a simple lift and repeat for US-based audiences. We had to anchor our launch in these learnings:

From these findings, we doubled down on airing this show on Samsung.com, found two very energetic hosts and had a script in hand with enough time to do a table read and a day of rehearsals. When August 27 rolled around, we aired our first show to much praise from Samsung. But this wasn’t a one-off event – we had more shows coming up to plan for.

With our frequency plan of airing a live show on Samsung.com for 60 minutes once per week, we had to figure out how to keep viewers watching a one-hour commerce-driven show. We started to weave audience passions into Samsung Live, such as gaming, music, art and beyond, as well as bring on relevant guests to cover a wide range of viewer interests. From August to December, no two episodes were the same because we had new guests, new scripts and new engaging segments to keep viewers watching – and most importantly buying.

We set out to increase intent and purchases from consumers already on Samsung.com in the consideration and research phase of the purchase journey. Our weekly livestreams effectively hit and surpassed KPI targets – including exceeding our target cumulative conversion rate by 201% – that we set for Samsung Live in the beginning. So much so that we had to keep changing what those targets were.

Ultimately, we tried to create a convenient, informative and rewarding way to purchase products via shoppable livestream on Samsung.com. And Samsung decided the show must go on in 2022. With one big and exciting caveat – of airing two live shows a week. 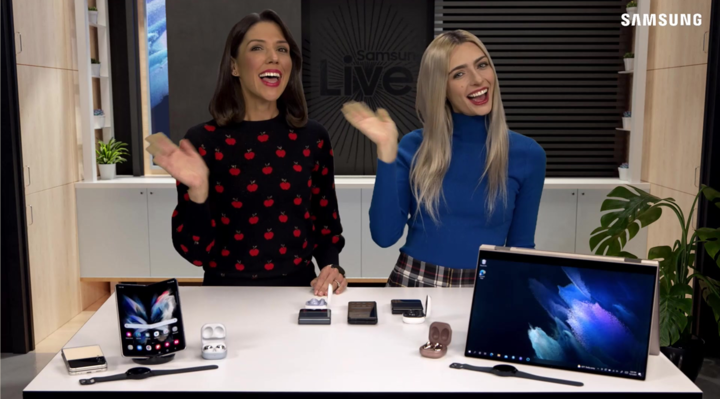