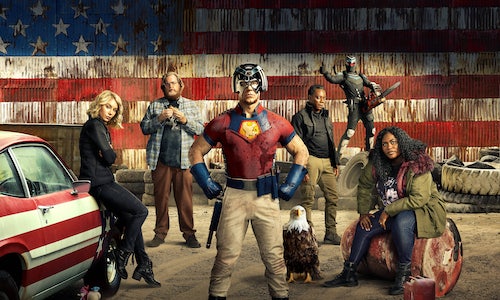 Who the f#ck is Peacemaker?! By the start of the tv series’ first season on HBO Max, everyone now knows. We set out to solidify the superhero from a relatively unknown side character in the Suicide Squad film to a leading persona you can’t miss both on screen and on your feeds.

We thought Twitter could use a moment of peace. So Peacemaker to the rescue. We aimed to grow our platform by taking a fan-first approach to all social activations and content experiences on Twitter.

From Suicide Squad’s theatrical release in summer 2021 to Peacemaker’s series premiere on January 2022, our goal was to introduce Peacemaker as the man behind the helmet, utilize creative storytelling to explore the new world of anti-hero and his ragtag team by building on the world of the series on social.

Peace always starts with a plan. By giving fans VIP access to all activations and events, exclusive releases, and unparalleled access to cast and crew with an always-on community management. Our content reflected the dynamic energy of the series and its characters, packing a punch week to week.

To introduce Peacemaker to the people prior to its premiere in January 2022, we launched Twitter the summer of 2021 and dove right into the action. We hopped on the latest trends, trolled Suicide Squad fans, posted DC Comics memes and fit right in with the Twitterverse.

Our loyal crew of followers got to see first drop exclusives like key art and teaser clips, as well as contribute questions to a Q&A with John Cena and creator James Gunn.

Once the series launched, we continued to bring the peace in powerful ways with engaging content pieces including highlight scene clips, dynamic creatives, stirring conversation, and a community management strategy that kicks a$$.

It didn’t take long for folks to start jumping on board the Peace Train. Within the first few months, our Twitter account accumulated nearly 60K followers - before the show premiered - and currently sits at 95K+ total followers. Our following is scrappy, so don’t count them out: by the finale, Peacemaker earned the #1 slot on Variety’s Trending TV chart.

Our always-on, always peaceful community management strategy coupled with bada$$ creative captured the attention of fans and haters alike, leading to more than 242M+ impressions and 3.4M engagements across title page posts to date. Even celebrities like Deadpool himself, Ryan Reynolds, started to take notice. Our robust engagement plan included daily interactions with the cast and crew- launching Peacemaker and his butterfly-fighting team into the zeitgeist. But we didn’t stop there.

We also went larger than life (and larger than Peacemaker’s triceps) on activations like:

At the end of the day, it’s clear that Peacemaker’s presence on the platform is unlike any superhero before – but then again, he isn’t just ANY superhero. He’s the f#cking best. 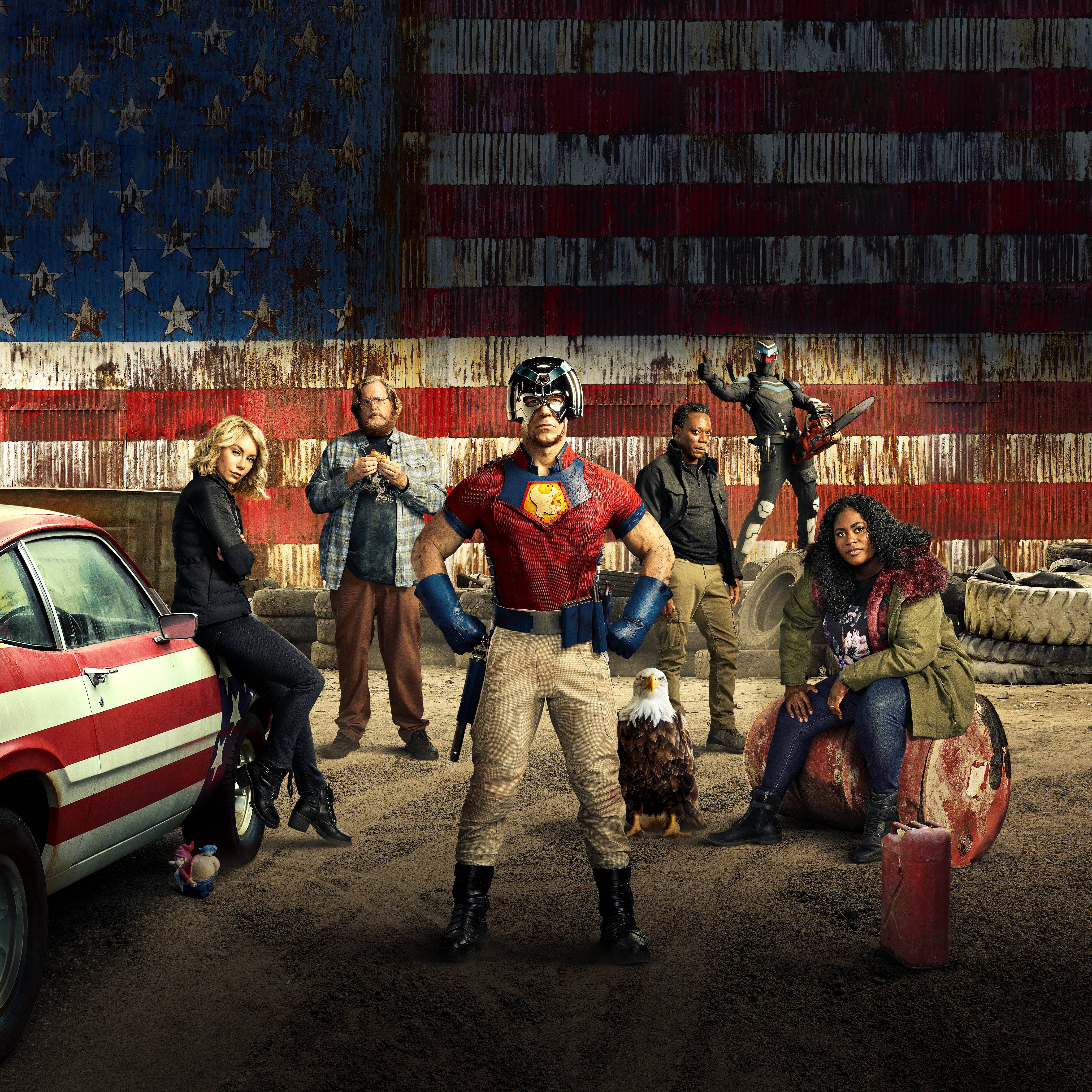 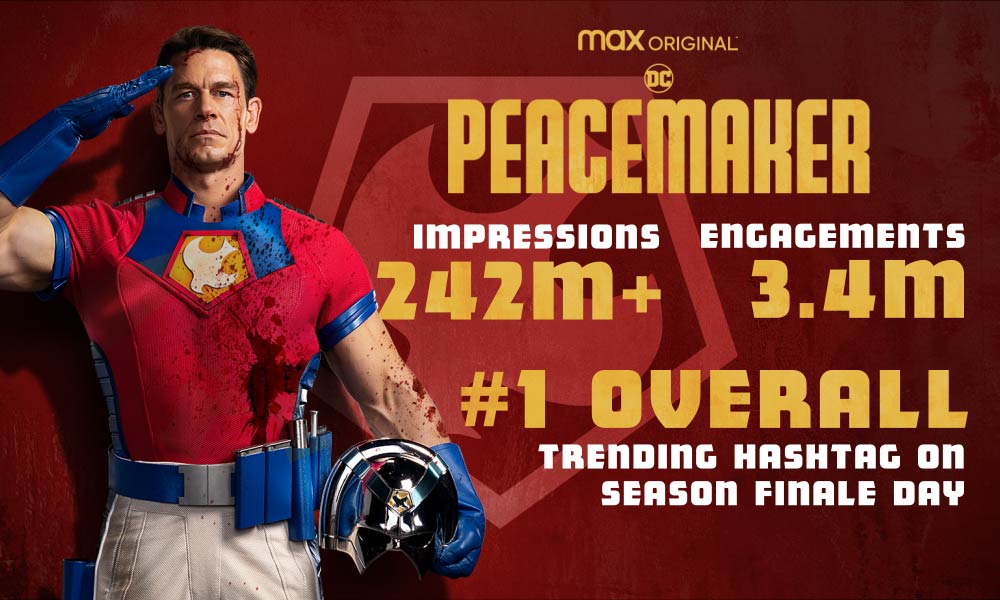 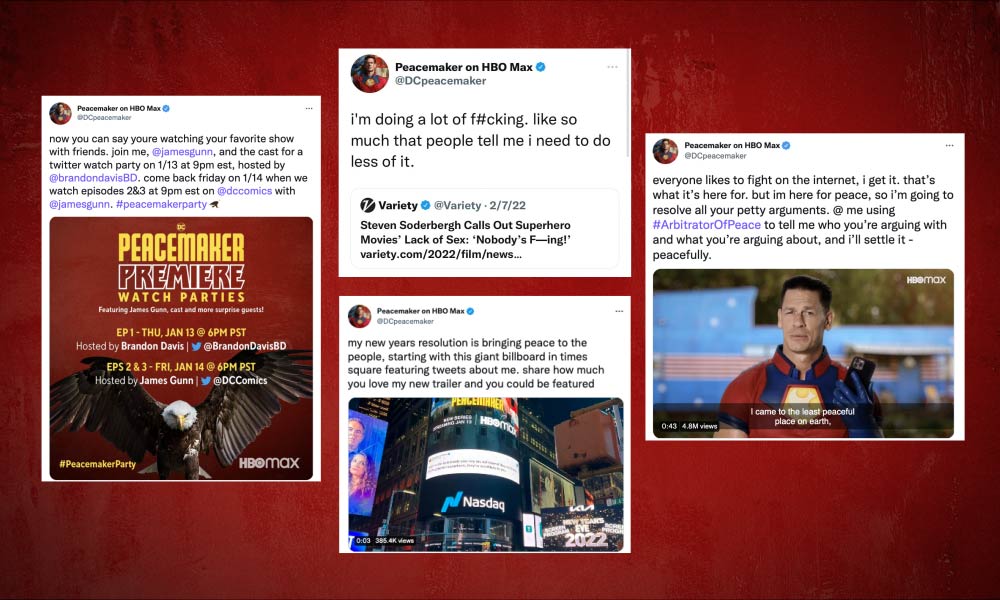 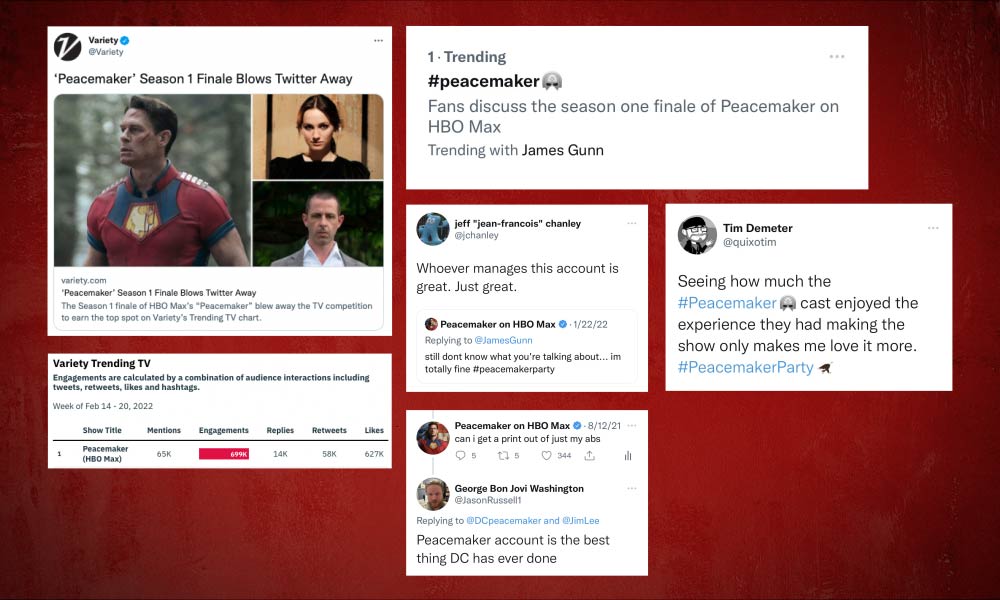 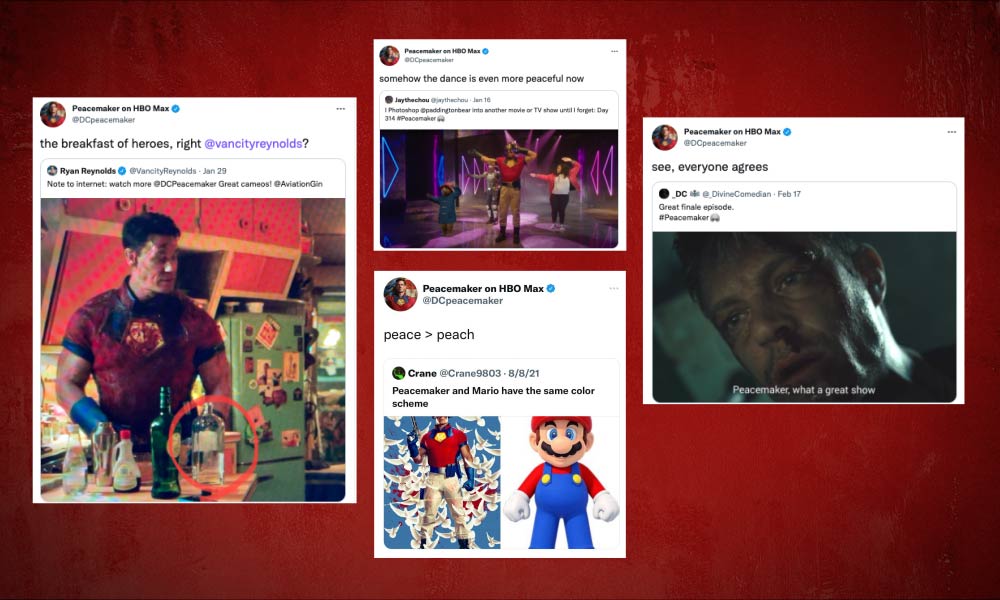