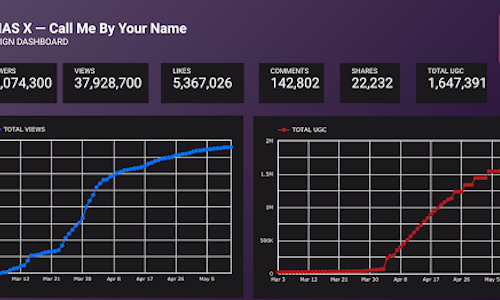 Lil Nas X - MONTERO (Call Me By Your Name)

The digital and social industry is a combination of creative executing and reporting. More often than not, clients receive data and reporting that is not helpful in understanding whether a campaign and/or marketing dollars are truly effective. VRTCL has worked aggressively to develop a software tool to provide those insights in real time. The software VRTCL has built, allows them to create smarter, immediate and more cost effective decisions that benefit campaign growth and gives them a higher chance of success for virality on TikTok. For Lil Nas X’s single “Montero,” the VRTCL team was able to quickly cross track real-time data with their influencers’ average engagement, and track what content was resonating with which TikTok audiences. This allowed for VRTCL to maximize their influencers’ impact, as well as make smarter and more cost effective decisions when sourcing talent on the platform and generate real campaign success.

VRTCL has been working on Lil Nas X songs for nearly two years and creating creative strategies and rollouts on TikTok to generate maximum success and shock value to online culture. For Lil Nas X’s single “Montero,” VRTCL began working the song before the release officially came out to tease the internet community of what was to come from the superstar artist. Following, VRTCL created a transition trend concept on TikTok that was then adopted by thousands of influencers and creators on the platform that began a UGC snowball online.

In April 2021, these trends that VRTCL helped create for Montero began to surge as indicated by their TikTok API Tracking software that aggregates real time data on the platform and consolidates that information into effective client facing reporting. The software tracks individual videos on the platform to process their views, comments, likes, shares, and profile links into one dashboard that allows its clients to get real time data and on-demand insights on how specific influencers and music campaigns are doing. Because of this insight, Griffin and team were able to amplify the campaign even more maximizing their influencers’ impact while the campaign was already organically picking up momentum. Which has enabled the VRTCL team to work smarter with more cost effective decisions when sourcing talent and generate real campaign success such with Montero.

By using VRTCL’s software they have been able to decrease influencer marketing CPM’s from $1500 per million views to $1000 per million views which in return has allowed them to not only increase their agencies’ profit margins but also increase their clients results. In addition, after developing this tool, they were able to drive more campaign success. For Lil Nas X’s single “Montero” in particular, VRTCL sourced over 40 influencers across multiple different sounds on the platform to create viral success in the song and lead it to 2.2M Video Creations on the platform. In 2021 alone VRTCL has had over five #1 singles on TikTok and more than twenty Top 10 songs on Billboard charts. For brand clients, the agency has been able to increase conversion rates by 20% to their landing pages because of the immediate data that they are able to pull from their software has allowed them to understand the content that resonates with audiences the best. Additionally, they have been able to increase page growth and following by 35% compared to their 2020 averages. 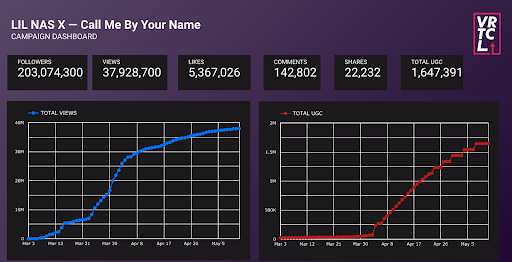