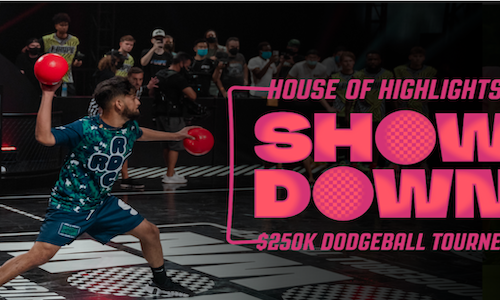 With the next generation of sports fans consisting mostly of the Gen-Z audience demographic, House of Highlights (HoH) is constantly searching for new ways to engage, captivate, and most importantly hold its audience’s attention. With Gen-Z showing consumption patterns drifting farther away from traditional sports media coverage, HoH outlined the objective and goal to redefine live sports competition in a way that speaks directly to this audience.

Since November of 2020, the brand has set the tone and delivered live competition that caters directly to the next generation of sports fans through the House of Highlights Showdown live competition series. The “HoH Showdown” brings together the internet's biggest creators with wildly engaging live formats that have revolutionized appointment viewing for Gen-Z fans. When it comes to live video, the HoH Showdown has become a must-view appointment for fans by putting the most popular influencers in high stakes, intense competition that keeps fans engaged and wanting more. From the four total HoH Showdowns to date, the Showdown edition that took this competition series to another level was the HoH Showdown: Dodgeball Tourney that brought content creators from  RDC World, FaZe Clan, 2HYPE, and AMP together to compete in the ultimate dodgeball tournament with $250,000 on the line. This HoH Showdown proved to be beneficial on all cylinders for the company by being the first sponsored Showdown, receiving high viewership and trending #1 worldwide on YouTube; all helping the company achieve the vision of creating sports content that engages the Gen-Z audience.

In order to bring this edition of the Showdown to life, House of Highlights (HoH) executed weeks of promotion that featured a full-scale social media marketing plan that activated millions of followers across accounts as well as the followers of the creator participants to help build anticipation for the event. House of Highlights was able to tap into the relationships it has with other brands within its WarnerMedia family and in the days leading up to the competition. In celebration of the game of dodgeball, HoH was able to reach out to some familiar faces to bring the game of dodgeball to life. During TNT’s popular show, “Inside The NBA”, viewers were able to experience a segment on the show where viewers saw the cast and crew compete in a game of dodgeball that created hilarious moments like when Shaq drilled Kenny in the head with a ball. The stars of “Inside The NBA” weren’t the only ones to help promote the HoH Showdown but also NFL star quarterback Kyler Murray. Although throwing a football is different from throwing a dodgeball, that didn’t stop Kyler from reviewing clips of participants throwing form and offering any advice he could to improve their performances.  Promotional content like these helped generate moments that were reposted across the HoH’s social accounts and affiliate platforms that racked up 2.9M engagements, & 45M+ views of lead-up content.

The promotional plan was only part of the strategy HoH set up for the success of the Showdown. The event showed HoH implementing multiple firsts with a corporate partnership, and E-Commerce integration. Pizza Hut was the presenting sponsor of the Dodgeball Tourney and was displayed front and center throughout the event. From the merchandise worn, the commentator booth, and throughout the entire set, the Showdown strategically integrated Pizza Hut in the fabric of the event and provided the brand with the ROI they were seeking. E-Commerce played a role in this edition of The Showdown by being the first HoH Showdown to sell the same jerseys participants wore during the event on the HoH online shop. The massive online following that participating groups RDC World, FaZe Clan, and AMP have were now able to own a piece of the action as they viewed the event.

In regards to the broadcast of the event itself, HoH had to decide which platform would be best to optimize viewership. In the past, HoH broadcasted early editions of both the HoH Showdown on both YouTube and within the Bleacher Report app. For the HoH Showdown Dodgeball Tourney, the company opted to go all-in on YouTube to have a centralized viewing experience for fans. By streamlining the broadcast, the Showdown was able to have all viewers in one destination instead of trying to track and engage with audiences on multiple formats.

The HoH Showdown: Dodgeball Tourney exceeded the expectations House of Highlights had for the live event. The event boasted 13 mins of average watch time per viewer, 163K peak concurrent views, and a staggering 572K comments live in the chat as the action took place, and was the #1 global trending video on YouTube. Fan engagement went to another level, with over 7,100 messages per minute and 119 messages per second during the live broadcast, proving how invested the viewers were toward the content. As the official sponsor, Pizza Hut reaped major returns from The Showdown’s success with 9.8M cross-platform social views, 1.7M cross-platform social engagements against their sponsored touchpoints alone, and was deeply integrated into the video that ended up being the #1 global trending video on YouTube globally.  In addition to all of this, The Showdown was able to put up impressive numbers against traditional sports media as well. The viewership on YouTube earned 2.7x the average minute audience (AMA) of MLB on ESPN 2 and 1.3x the AMA of NHL on NBCS. The ultimate goal of the Showdown redefined live sports competitions and results like this prove House of Highlights was able to achieve just that.