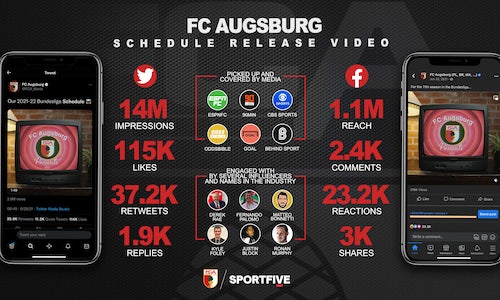 After a quiet summer, the schedule announcement is the first punch of excitement for a team/league. The Bundesliga and FC Augsburg are no exception. It's the chance to catch fans' attention in the offseason, often being the first piece of ‘breaking news’ in this calm period.

However, there's one issue - every team and the league itself are all sharing the same information on the same day at the same time. This is particularly difficult because everyone sees what is possible. They recognize the opportunity and go all in. It happens in every sports league. The Bundesliga is no different.

Did we mention that you only have 60 minutes between when the league shares your schedule and when you are required to push it out to the public?

Given all of this, the question we needed to solve was, ‘How does FC Augsburg’s schedule release stand out amongst all the other teams and how do we create that piece of content in less than 60 minutes?’.

This moment is one you see teams often play into with big budgets as the Atlanta Falcons did. For us, not only did we have the constraints of timing and marketplace competition, but we also didn’t have a big budget. More specifically, we had no budget. There weren’t funds to put towards a production or a media plan. Whatever it was would need to be made internally and was going to need to gain traction organically.

While FC Augsburg play in the world’s second most popular sports leagues, the Bundesliga – the top-flight of soccer in Germany, they are an unknown team. They aren’t a household name like Borussia Dortmund, nor do they have the pedigree of their Bavarian neighbors Bayern Munich, the nine times reigning champions of Germany. For reference, prior to the schedule release on their English-language Twitter account, FC Augsburg’s 19,000 followers were dwarfed by Bayern’s 1.7m, amounting to having 1.11% of their total.

To break through the clutter of all the announcements, we needed to create a piece that embodied successful content on social media – a humorous concept that had its roots in virality.

Given that we only had one hour with the information before it needed to be shared, our strategy was to create an execution that could be prepped ahead of time and then organized into its final version once we had the team’s schedule.

What resulted was a video that was broken into distinct segments, one representing each opponent, that could be curated into the schedule’s order quickly. Each segment was a humorous representation of each team. A few examples include:

Further, the intro was a nostalgic play on Looney Tunes to draw those of all ages in to ensure longer view times and in turn better algorithmic success.

Immediately, the post began to spread like wildfire. Within a few minutes, it was trending globally on Twitter. A couple more and it was viral on Facebook and Instagram. Soon enough the entire soccer world was only talking about one thing – FC Augsburg’s schedule release. Every major soccer media outlet was sharing/referencing it, from CBS, Goal.com, to being highlighted during ESPN+ programming. It was even referred to as ‘The best schedule announcement ever’ by Oddsbible, the self-proclaimed ‘biggest betting community in the world’ and the betting arm of the LAD Bible Group.

In addition to the quantitative success, the video started a trend! Within a couple of weeks, one of the top teams in Poland (Wisla Krakow) and then Turkey (İstanbul Başakşehir) published schedule release videos that were created in the same style, except this time fans spammed their comments asking them to credit FC Augsburg for the inspiration, which they eventually did! The imitations weren't only in Europe and Asia but also in North America. When it came time for MLS teams to release their schedules, FC Dallas used the same approach. 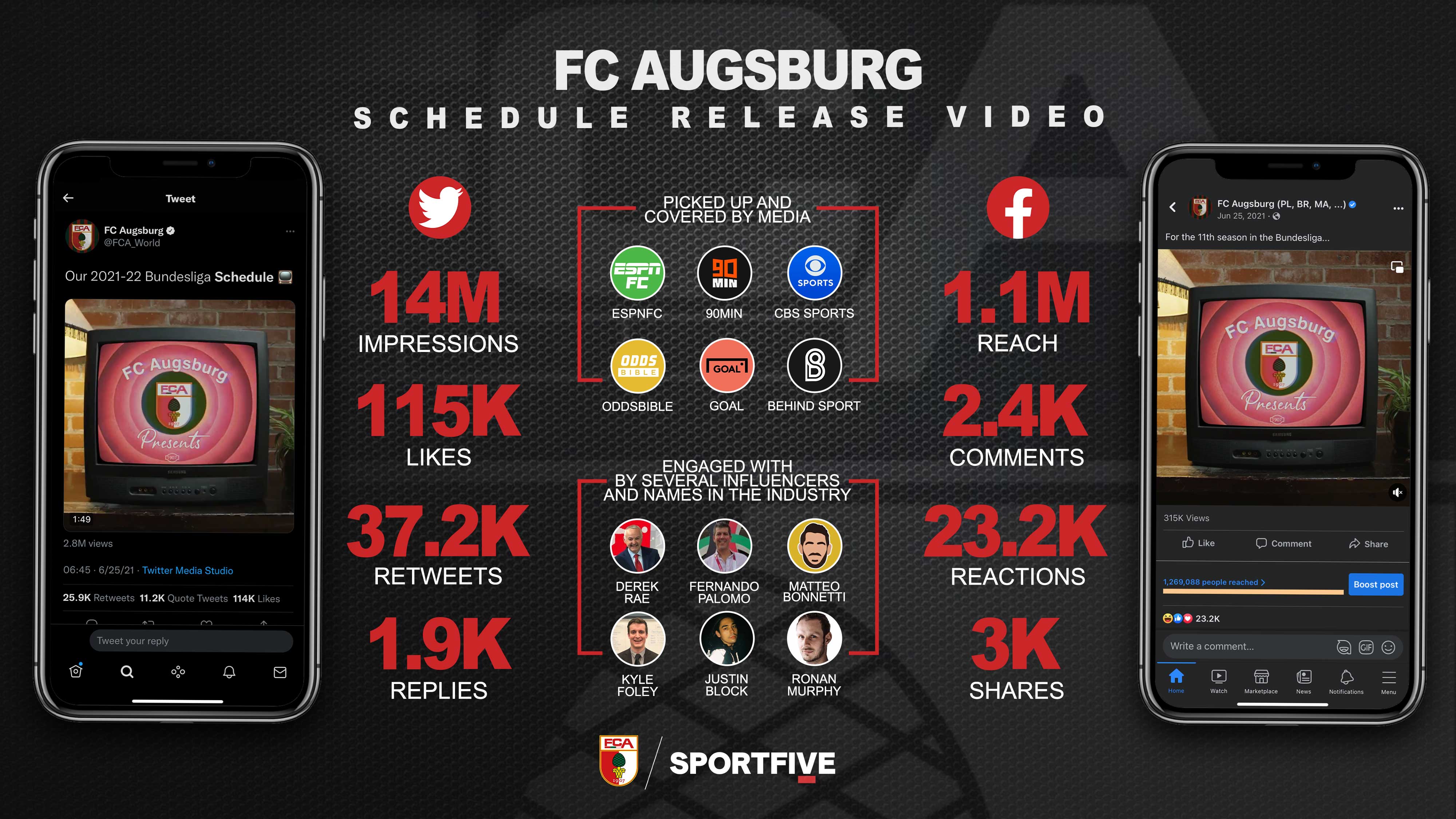