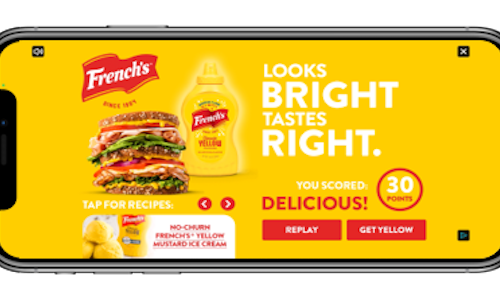 McCormick was looking to increase awareness for French’s Classic Yellow Mustard during the 2021 summer season, highlighting the product as the ideal condiment for sandwiches. While both French’s consumption and sandwich eating rose during the pandemic, strong category competition remained. Additionally, mobile phones held the #1 spot as the most popular gaming device globally. To reach our mobile gaming audience, we focused on mobile in-app gaming exclusively.

McCormick tapped AdColony to develop an innovative campaign that would capture the fun, carefree feeling of summer through an interactive game component. To measure brand awareness, the three-month campaign aimed to drive high click-through (CTR) and engagement rates. Partnering with AdColony allowed French’s to engage with consumers, which drove top of mind awareness and encouraged usage for better tasting sandwiches.

In order to reach household decision makers, the campaign was targeted towards mobile gamers aged 25-54. Popular gaming apps were leveraged as part of the targeting to reach these target audiences. McCormick worked with creative agency, Fitzco, to create an upbeat video to show the versatility of French’s Mustard especially during summer meals. By partnering with AdColony, McCormick leveraged Instant Play HD Video technology to give smartphone users a high-quality viewing experience. Implementing an interactive Dynamic End Card gave users an extra opportunity to engage with the brand and raise awareness for French’s Classic Yellow Mustard.

This campaign brought summer to life by incorporating French’s Mustard with favorite family foods. After consumers viewed the video about the product, they were then brought to a screen which showed a conveyor belt with classic American summer foods that pair well with mustard. They were then encouraged to tap the lever and put mustard on their favorite foods before time runs out. The conveyor belt also had foods that did not pair well with mustard (like candy) to give consumers an extra challenge. Giving the users the ability to play a game emphasized the jovial nature of the brand and encouraged excitement among its target audiences.

Once the game was done, consumers were shown CTA buttons to replay the game, buy the mustard, and tap for recipes (including one for yellow mustard ice cream!), which led to the McCormick site. This campaign exemplified the carefree feeling of summer while delivering on key KPIs.

By utilizing AdColony’s Instant Play HD Video and Dynamic End Card technology, the campaign provided the target audience with an experience that was both fun and interactive! This effective ad unit drove strong video completion rates and engagement within an immersive mobile environment. With AdColony’s Instant-Play™ HD Video technology, all video was pre-cached in-app, allowing for zero buffer time and a seamless user experience. Implementing the gamified Dynamic End Card gave users an extra opportunity to engage more with the brand anywhere they ventured over the summer and raise awareness for French’s mustard. AdColony’s SDK integration into the top 1000 apps allowed McCormick to reach their target audience within the top mobile Gaming apps, where the target audience spends significant time.

The French’s mustard campaign surpassed multiple benchmarks to deliver appetizing results! The overall Instant Play HD Video VCR for the campaign was an impressive 92.04%, surpassing the 80-85% AdColony benchmark! The campaign also saw a CTR of 2.13%. This exceeded AdColony’s benchmark of 0.35-0.7% for similar units and past campaigns.

Additionally, the dynamic end card garnered a 34.33% engagement rate with an average time spent of 14.46 seconds. Both metrics surpassed AdColony benchmarks of 7-10% and 8-10 seconds, respectively.

AdColony also utilized Double Verify technology to ensure that results were authentic and the campaign remained brand safe. According to third party data from Double Verify, the overall DV Video Viewable rate was 97.39%, surpassing AdColony’s viewability benchmark of 90% and DV’s benchmark of 93% 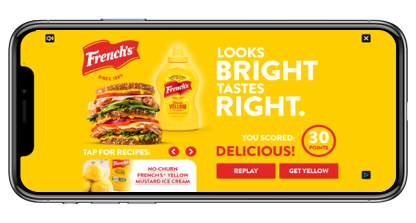