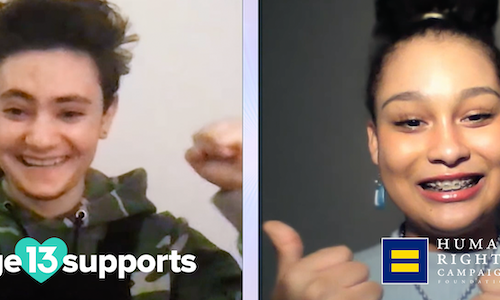 The objective was to raise awareness and support for the transgender community, and specifically to combat bullying towards transgender youth, the theme explored in Two Sentence Horror Stories season 2 episode "Elliot.”

Inspired by the online microfiction, TWO SENTENCE HORROR STORIES (TSHS) is a critically acclaimed psychological horror anthology series on The CW and Netflix featuring a different sub-genre of horror in each episode. Designed to subvert classic horror tropes by centering everyday people and diverse perspectives, the half-hour series taps into universal primal fears while tackling provocative social and cultural issues that exist within our modern society. Created by Vera Miao, TSHS features one of the most diverse and inclusive writing and directing teams in Hollywood and Canada, including a female-led LGBTQ+ executive producing team.

The ”Elliot” episode focuses on a transmasculine student who endures merciless bullying in his high school until a mysterious janitor offers the teen a way to take care of his bullies once and for all. Lead actor James Goldman and director Chase Joynt (Framing Agnes), are two incredible trans talent that brought an authenticity to the episode shining a light on the hot-button issue of transphobic bullying.

The strategy was to leverage the popularity of Two Sentence Horror Stories and partner with a world-renowned organization that not only advocates but also fights for transgender rights on a national level. Our collaboration would spawn a PSA conversation series with year-round touch points, from Transgender Day of Visibility (March 31) to Pride Month, National Coming Out Day, International Pronoun Day, and Transgender Day of Remembrance (November 20).

We chose to work with Human Rights Campaign (HRC), an organization that has spent 40 years creating the most powerful movement for equality our country has ever seen. Their goal is to ensure that all LGBTQ+ people, and particularly those who are trans, people of color and HIV+, are treated as full and equal citizens within their movement, across the country and around the world.

The PSA conversation focused on trans youth and anti-bullying covering topics such as coming out, their experiences as trans youths, trans characters in media, the importance of pronouns, as well as offering words of encouragement to others, in addition to just being a teenager, reflecting that trans teens aren't that different from non-transgender teens. The conversation, held virtually due to the pandemic, featured two trans teen talents: James Goldman, the lead of the "Elliot" episode, and Ve'ondre Mitchell, an HRC Youth Ambassador and TikTok influencer.

The PSA conversation was shared across social media, including Stage 13 (the studio behind TSHS), HRC, James Goldman, and Veondre Mitchell's socials including Stories garnered over 20K organic views and countless support from the transgender community sharing their trans story. The PSA was supported by WarnerMedia (Stage 13’s parent company), who is an active supporter of HRC.