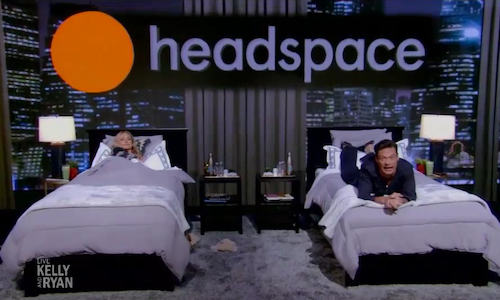 A good night’s sleep is a requirement for a healthy lifestyle and yet it seems to elude so many Americans night after night. To help eradicate sleep deprivation (or at least try to), Headspace wanted to create a multi-platform campaign to help folks get quality sleep beyond counting sheep. Tasked with emphasizing Headspace’s sleep meditations content, we orchestrated an integrated campaign using our road-tested Transactional Brand Building approach to simultaneously supercharge new member growth and increase brand awareness.

Our marching orders were clear. As the leader in mindfulness and mental training, Headspace wanted to achieve three objectives alongside its strategic partner (in this case that’s us agency folks):

Driven by data and behavioral insights from rigorous media testing, the integrated campaign was anchored by a cross-channel partnership on the nationally syndicated daytime show, “Live with Kelly and Ryan” for its very own Sleep Week. To build on the awareness from ‘Sleep Week,’ we leveraged its exceptional audience experience to build layered campaigns across social media platforms, created a microsite with a giveaway, and executed a VOD/OTT campaign across the entire Disney portfolio. The campaign succeeded in seeing an immediate increase in branded term searches, impressions, and new subscribers. You could say it was a dream come true.

In order to get the message across about Headspace's new sleep meditation content and its health benefits, we first identified the right target audiences. Who would be the most receptive to better sleep? After rigorous media testing, we identified two main groups -- sleepless parents (25 - 44 years old) and savvy established women (45 - 65 years old). Behavioral insights revealed diverse programming across different channels as the best way to inform and engage these target audiences. The campaign would not at all be effective with just one big bang. It needed multiple touchpoints that amplified one another, coalescing into a campaign with multiple media channels spanning television, OTT, paid social, and programmatic display.

“Sleep Week,” a five-day integration on “Live with Ryan and Kelly” featured a new topic each day, sleep industry experts, and vignettes — totaling over 26 minutes of air time​. Each segment concluded with an "Inbox Segment" that encouraged viewers to visit the campaign's microsite to enter the sweepstakes for a one-year subscription by submitting their sleep routine. Lastly, we leveraged its exceptional audience experience to build layered campaigns across Facebook, Instagram, and Snapchat as well as a VOD/OTT campaign across Disney's portfolio.

The campaign's success proved the desire to improve sleep and rest amongst the target audiences. On Monday and Friday (giveaway days), there were spikes in viewership during "Sleep Week.” Additionally, the social and VOD/OTT campaigns over-delivered on impressions. There were over 750 sweepstakes entries and 440 new Headspace members. The campaign exceeded Headspace’s goals and objectives in building awareness and engagement on its app.

One of the campaign's highlights was seeing the direct correlation of awareness and interest in Headspace in real-time. For example, during "Sleep Week" with ‘Live with Ryan and Kelly,’ there was an increase in branded term searches, delivering over 70K searches during the campaign's first week. Audiences were eager to get more information on the app and its content.

The campaign's success proved our ability to reach audiences through integrated campaigns through multiple media channels. Due to the success of the sleep campaign, Rain the Growth Agency will continue to build Headspace as a direct-to-consumer brand and oversee its cross-channel media and analytics responsibilities. In addition, Headspace has expanded budgets for future integrations, allowing the Strategic Partnerships team to incorporate publishers within their strategies. 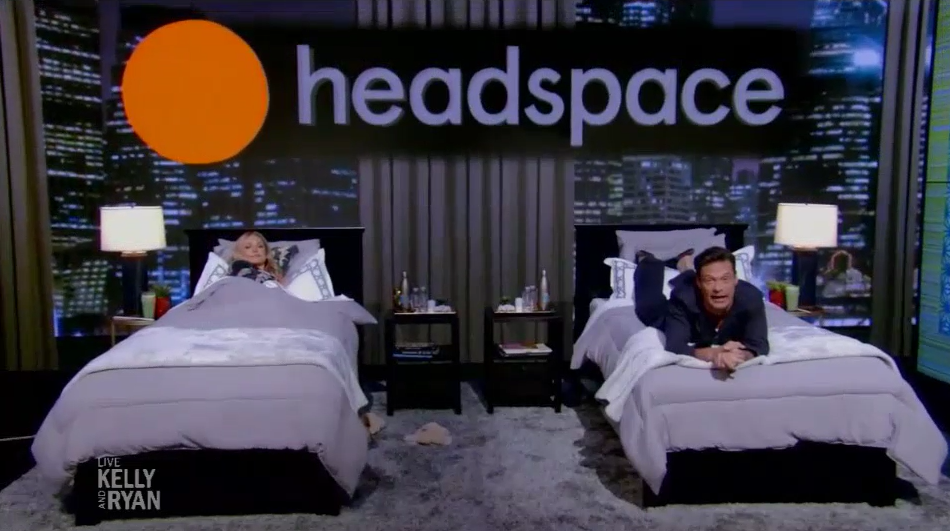