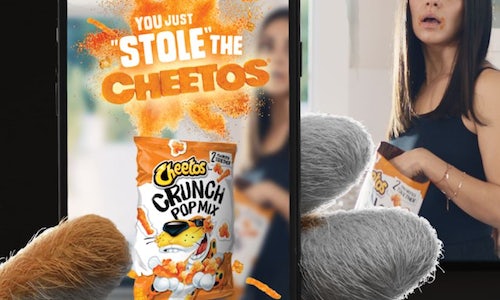 Our tagline, “It’s a Cheetos Thing,” means we embrace the appetite for Cheetos as a snack while using the mischievous powers of Cheetos to engage our audience. Our objective at Super Bowl was to launch our new product innovation at scale, highlighting examples of CPM irresistibility across their digital and real-life universe. Provide fans with mischievous opportunities to engage on platforms where we can push the boundaries and capabilities beyond the norm. to drive awareness and salience.

Our KPIs were to 1) drive brand love and cultural breakthrough, 2) grow and engage Cheetos fans 3) drive sales and Cheetos crunch pop mix. We were not tasked with specific numerical goals.

Snack stealing is something we all do, and people recognize this. 48% of Americans admit to stealing snacks from their friends or family. This mischievous behavior inspired our creative strategy, leveraging that playfulness and love of our Crunch Pop Mix. In our creative, we showcased the unavoidable desirability of our new product – it’s so delicious you’ll even go behind your partner’s back to eat it (as Mila Kunis did to Ashton Kutcher). We leveraged media and tech to allow our audiences to take part in the fun themselves and “steal” a bag of Cheetos from us!

For the launch of Crunch Pop Mix, we wanted to spread awareness by building anticipation and participation during the Super Bowl. We initially began by teasing our “It Wasn’t Me” messaging to drive game-day engagement. From there, we launched a nationwide campaign across social and video channels to drive awareness of the program. Our approach was to target our audience and Gen Z. Every great artist has a muse, for Cheetos, it’s our fans. Everything we do is inspired by their behavior. Our fans are eternally youthful, spontaneous, and don’t take themselves too seriously. We exaggerate the cultural insights of our Cheetos fans by targeting them with media that is relevant and fun to them. Cheetos is one of the world’s messiest snacks, so when executing on the insights we do so in an exaggerated and ridiculously relatable way. This keeps the work fresh, entertaining, and breakthrough.

We supported our launch with a full 360 plan by unleashing the power of the brand in a unique way. We leveraged social platforms in a new way and tied our messaging with influencers and celebrities in the spot. Crunch Pop Mix is a desirable snack, and we worked to communicate this message through our :60s Super Bowl spot, and a first-to-market execution that allowed our audience to “STEAL” (using a coupon) a bag of Cheetos from our advertisement directly from their phone. The consumer could open their SnapChat app during the commercial and once prompted, swipe up to “STEAL” a bag of Cheetos. This was a first-to-market social technology that set Cheetos apart on game-day.

Pre-game, we launched teasers on FB/IG, Snapchat, and YouTube weeks ahead of the Super Bowl, driving awareness to the campaign narrative and highlighting examples of the irresistibility of the Crunch Pop Mix. We also launched a how-to video across owned and paid social channels to explain the SnapChat tech to encourage participation. We provided our Cult audience with mischievous opportunities to engage and reward them with Cheetos. We set up an OOH unit in Brooklyn where people could scan a QR code to “steal” a bag of Cheetos, like the experience on linear. The campaign earned 44B impressions!

Post-game, we executed a TikTok hashtag challenge to keep the conversation going around “stealing Cheetos” where ~907K creators made 2MM+ videos. Cheetos felt pushing boundaries on trusted social platforms proved to win around Super Bowl since consumers were ready and willing to engage, driving 3.7B views and earning 18.5% engagement rate (60% higher than 2020 SB).

The campaign was an enormous success for Cheetos, driving awareness and trial on the biggest possible stage, all notable metrics below:

#1 in Break through ad on Ace Metrix

#1 among snack brands for game-day engagement

44B Impressions (benchmark 11B)

You can deny stealing someone’s Cheetos, but there’s no denying that the campaign was a tremendous success. Cheetos saw a significant increase in total sales compared to the 2020 Super Bowl commercial and the TVC drove Cheetos Crunch Pop Mix trial, (50k bags on game day alone!

Video for Cheetos Snap to Steal 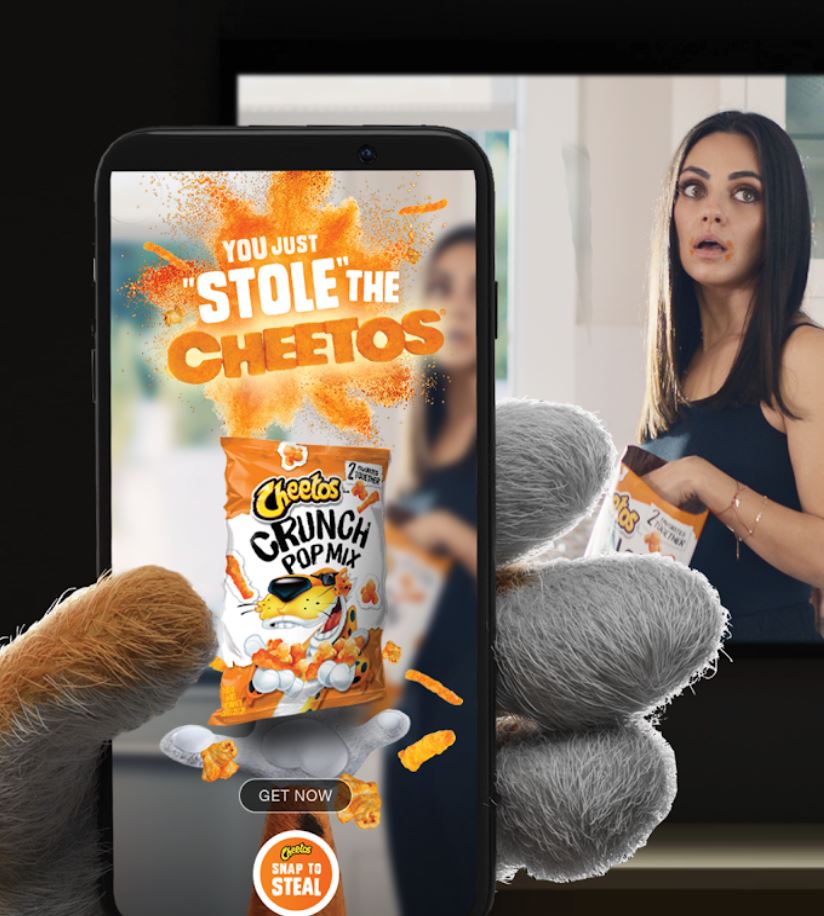