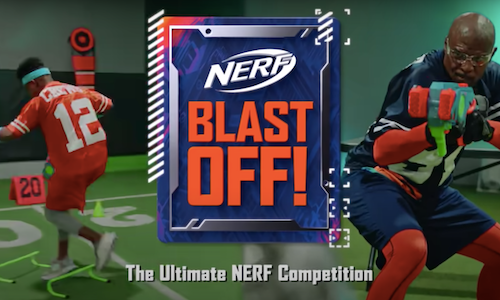 Blast Off: The Ultimate NERF Competition

Within our branded content, we endeavored to enlist recognizable talent (former NFL athlete and a Nickelodeon star), infuse Nickelodeon humor that was native to our platform and expected by our fans, and ensure our promotion of Nerf’s blasters shined through via organic storytelling, all while representing their brand ethos. With a mix of paid media and organic drivers, we set out to obtain 30M impressions between our two custom YouTube episodes.

As an extension of the NFL Slimetime linear show, our series needed to be football-themed even though the Nerf blasters are not, so we knew we’d need to make that connection while keeping the content active, funny, and appealing for our audience.

Tapping into Nickelodeon classics, like Double Dare, we created a football training camp-inspired target practice obstacle course. Obstacles were informed by football drills and scenarios, but modified to utilize and highlight the Elite 2.0 Flipshots Blasters. For example, our talent found open receiver targets by firing darts through wacky waving arm inflatable defensive linemen, mimicked a receiver awareness drill by finding colored targets, and fired a field goal through the uprights (and past the defensive foam finger) to complete the first episode. In order to make it more fun for talent (and capture authentic joy and energy on camera), we allowed the challengers to compete for real, and crafted alternate endings to account for any winner/loser/tie scenarios.

We believed a “sportscaster” character could communicate each of these challenges with humor. Popular Nickelodeon talent appeals to our audience, and A-level talent was a client requirement. Our timeline paralleled the football season, so active NFL players were unavailable. Many well-known former players are commentators now, but were either unavailable or uninterested in physically competing.

Champions find a way, however, and we had one “hail mary”! One of our funniest, most athletic Nickelodeon talent is Isaiah Crews (from “Side Hustle”) is the son of multi-faceted Terry Crews (Brooklyn 99, AGT); a former NFL player in peak condition. With this winning combination, the father-son duo would play both the competitors AND the announcers!

This game plan was a huge creative win. We crafted our scripts accordingly and Terry and Isaiah’s characters in the booth (’Buck Manly’ and ‘Dart Deskfield’, respectively) brought so much comedy to the videos. Their relationships would seamlessly shift from impartial announcers, to proud/concerned family members, as well as uber-competitive fans of their characters competing in the challenges. Buck and Dart’s ongoing banter brought non-stop Nickelodeon humor throughout both episodes. Each ended with absurd “announcer-quences”, such as inducting their competitor into the Nerf Blast-Off! Hall of Fame. The content truly was a winning combination of Nickelodeon talent, famous family members, an amazing brand, and the experience we have of reaching our fans where they are, with entertainment they love.

Based purely on metrics, we surpassed our impression goal, amassing 30.6M impressions and 3.4M video views between our two custom YouTube episodes. Compared to all other Nickelodeon sponsored programs, our Nerf campaign outperformed the ~10% average engagement benchmark, garnering an 11.4% engagement rate. Talent was neither required to post, nor promote the content. However, Terry Crews loved the campaign so much that he posted the first custom episode on his official Instagram and TikTok handles. These added value posts increased our campaign reach when he shared with his combined 29M+ followers, grossing an additional 238k organic views. Our Hasbro clients were thrilled with the content we put forth. From the moment we shared our initial scripts, Hasbro was on board with and championing our plan to bring their brand to life through our storytelling, like only Nickelodeon can. They confirmed the balance of athleticism, comedy and trickshots truly embodied their brand ethos. We achieved their goal of contracting a former NFL player, Terry Crews, and pairing him with Nickelodeon Talent, his son, Isaiah Crews. Their energy and dynamic shine through in each video. They brought a natural friendly father-son competitiveness and infused their own flair and humor, which made these videos fun for kids and adults alike to watch over and over again.

Video for Blast Off: The Ultimate NERF Competition 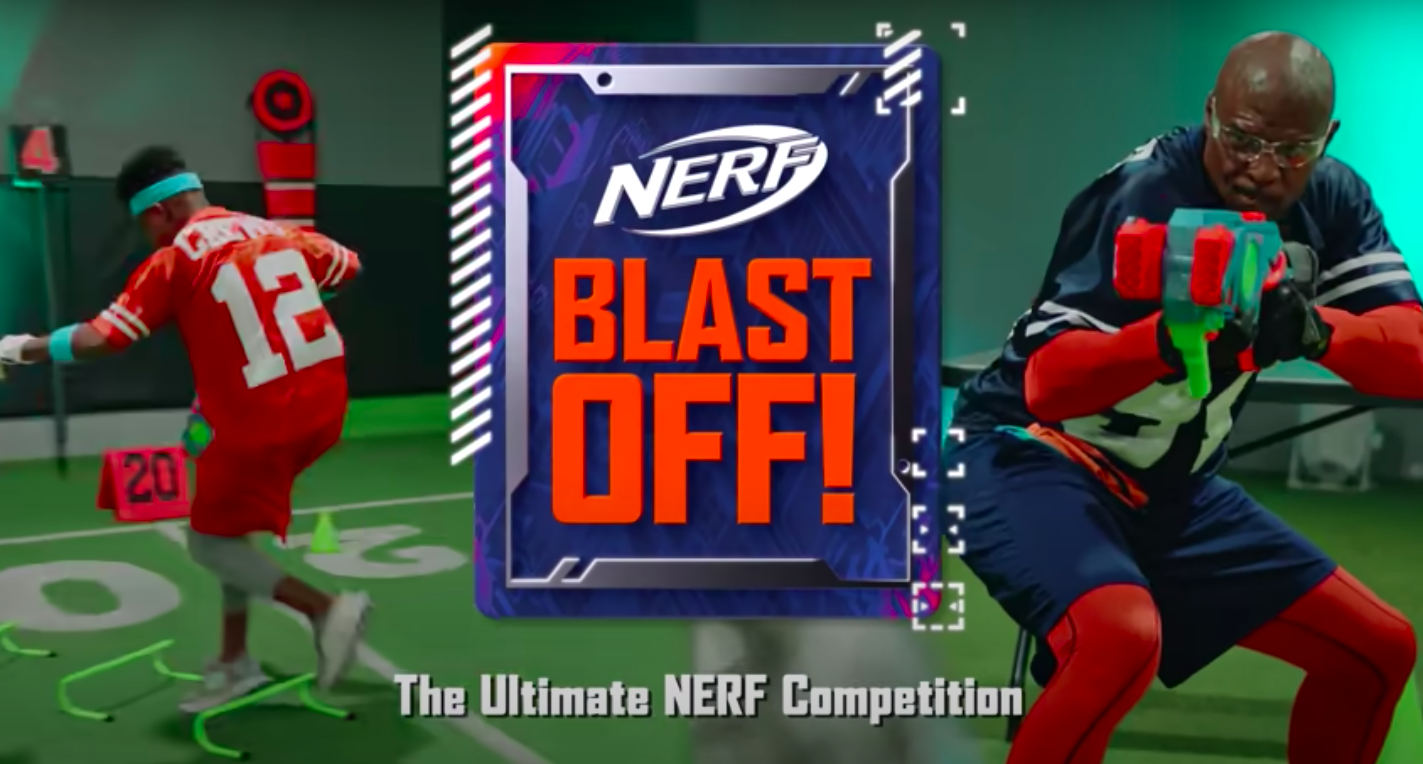