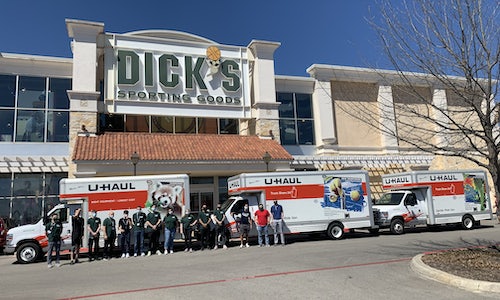 Addressing the Gender Gap in Sports with 160over90 and VMLY&R

In 2021, the world of sports still faces disparity when it comes to equality between men’s and women’s accessibility and opportunity. From equal pay to equal field time and access to equipment, there is still a great amount of work to be done to close the gap of equality.

A prime example of this disparity took place during the 2021 NCAA March Madness Basketball Tournaments. Videos posted to social media by Stanford coach, Ali Kershner, and Oregon player, Sedona Prince, went viral, comparing the drastic differences between the men’s and women’s basketball teams’ weight rooms. While the men’s teams had ample, state-of-the-art equipment, the women’s teams were left with minimal equipment: a rack of free weights and a few yoga mats. Social media immediately reacted, and the NCAA began to receive swift backlash.

As soon as Prince’s post went viral on the evening of March 18, DICK’S Sporting Goods took action. Members of the Store operations, Product, Marketing and Communications team developed a plan of attack just before midnight on the 18th. The next morning, they reached out to the NCAA to offer assistance and immediately began to mobilize equipment from their Texas-area stores to be delivered to the women’s facility in San Antonio at no charge. To ensure the NCAA knew that DICK’S was serious about the donation and had equipment ready to send, they reached out to previous partners at the NCAA and even contacted a college strength coach to advise on what was needed. When the NCAA did not initially respond, DICK’S tweeted a picture of the truckloads of equipment that were on standby ready to be delivered to the women's facility. The tweet quickly picked up steam and the volume of media coverage, social engagement and overall positive sentiment from reporters, notable sports figures and consumers helped differentiate DICK’S amongst other brands that were slower to act.

DICK’S has made the commitment to take substantial action and raise awareness when it comes to elevating girls and women in sports – which made this viral moment with the NCAA immediately catch the attention of Senior Executives at the company. In order to best serve the women and girls who enter DICK’S stores and shop online, the company has made several efforts over the past few years to support and enhance the female shopping experience. DICK’S launched an ad campaign in early 2021, titled Inside Moves, shining a spotlight on female leadership at the company and their desire to continue to push against the barriers that block women and girls from advancing in the world of sports.

Based on social conversation and sentiment around gender equality in sport, and regardless of whether the NCAA accepted the donation, DICK’S wanted to showcase that they were ready and willing to provide the female athletes in need with immediate support. In addition, DICK’S wanted to use this opportunity to further solidify their “why” in regard to the importance and severity of the situation. These women put forth immense hard work and dedication and deserved to be provided with the same resources as their male counterparts. While many on social media might have quickly scrolled past the videos as an uncomfortable reality of the world we live in, DICK’S seized the moment to encourage a tough but needed conversation on the vast inequities across sports, beyond the professional level. This effort also demonstrated to DICK’S employees and customers that they were serious about creating equality in the world of sports.

DICK’S Sporting Goods offering the NCAA assistance in properly equipping the women’s weight room was a result of quick, reactive strategy and planning. Innovative brands and their partners are constantly keeping a pulse on current events and moments that present opportunities to be game changers in their respective industries. With this at the forefront of our thinking, the team acted quickly to increase awareness of the brand’s authentic efforts to champion girls and women in sport by taking quick action to breakthrough real-time social conversation. In order to execute this goal, a timely social media announcement had to be utilized. DICK's quickly responded to the viral situation by tweeting from the official DICK’S Sporting Goods account announcing the intended plan to donate equipment to the women immediately. Behind the scenes, internal alignment was quickly gathered on social post copy and corresponding messaging for any incoming, reactive media inquiries. Additionally, the team swiftly determined equipment allocation and transportation logistics in hours' time through concise communication with alignment from senior executive leadership to the local store level.

All of this led to being able to leverage a social post for earned media and organic social interaction to drive awareness and engagement amongst athletes and DICK’S consumers while continuing the conversation about a predominant issue and directly making known where DICK’S stands on the issue of gender equality in sports.

While the NCAA ultimately declined DICK’S offer, this real time response further solidified DICK’S commitment to support equality for women in sport. The torrent of publicity that DICK’S helped generate moved the NCAA to quickly work with a local vendor to secure equipment. DICK’S social announcement was successful because it was executed in an opportune and timely manner, inserting the brand into the ongoing social media conversation as one of the first large corporations to make a statement on the situation as it was unfolding in real-time. Media coverage and social engagement were overwhelmingly positive in sentiment towards DICK’S.

Through a completely free, earned and swift reactive approach, DICK’S was able to integrate existing messaging on their efforts towards equality for girls and women in sport, creating cohesive alignment across their several ongoing initiatives. 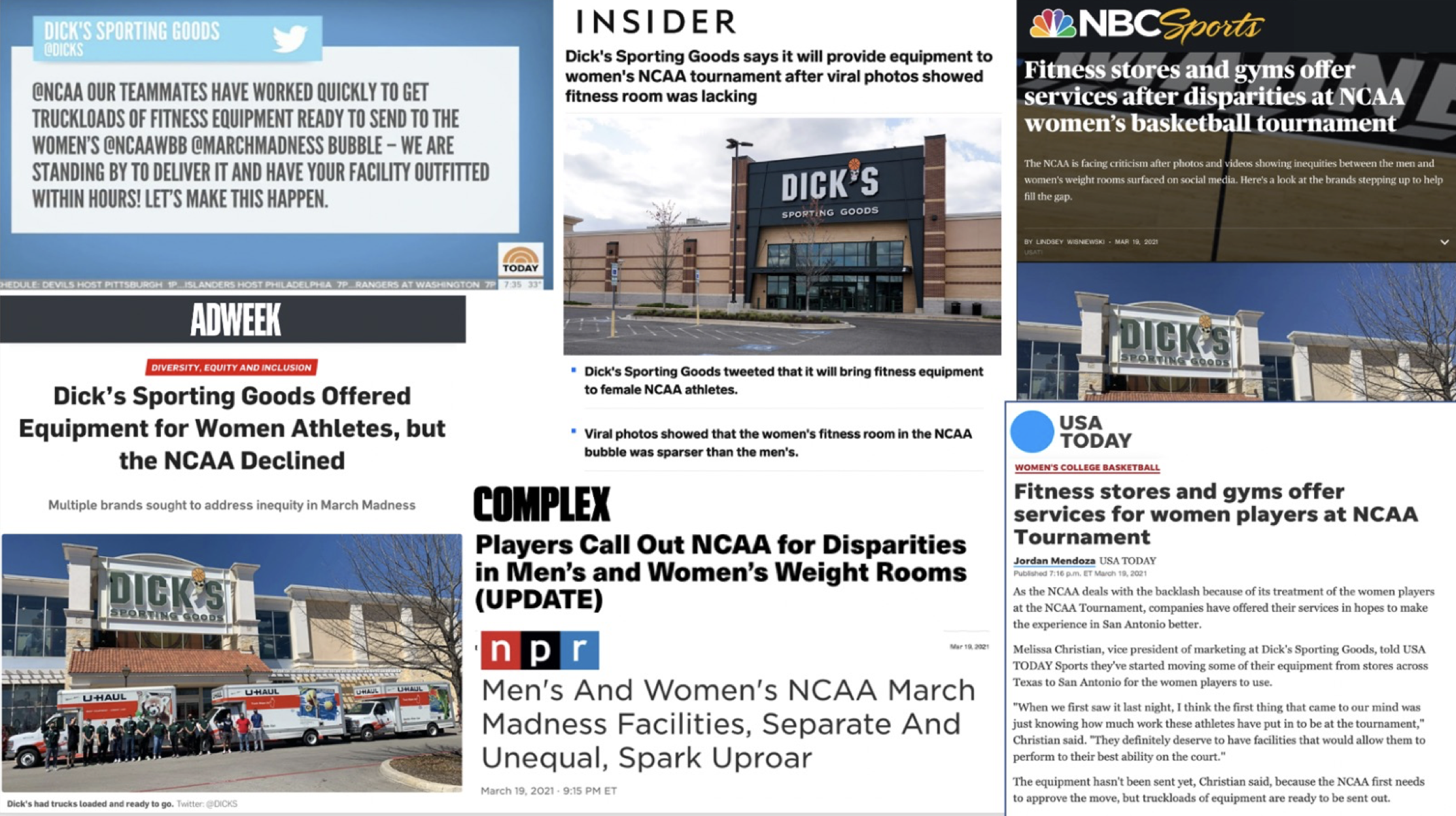 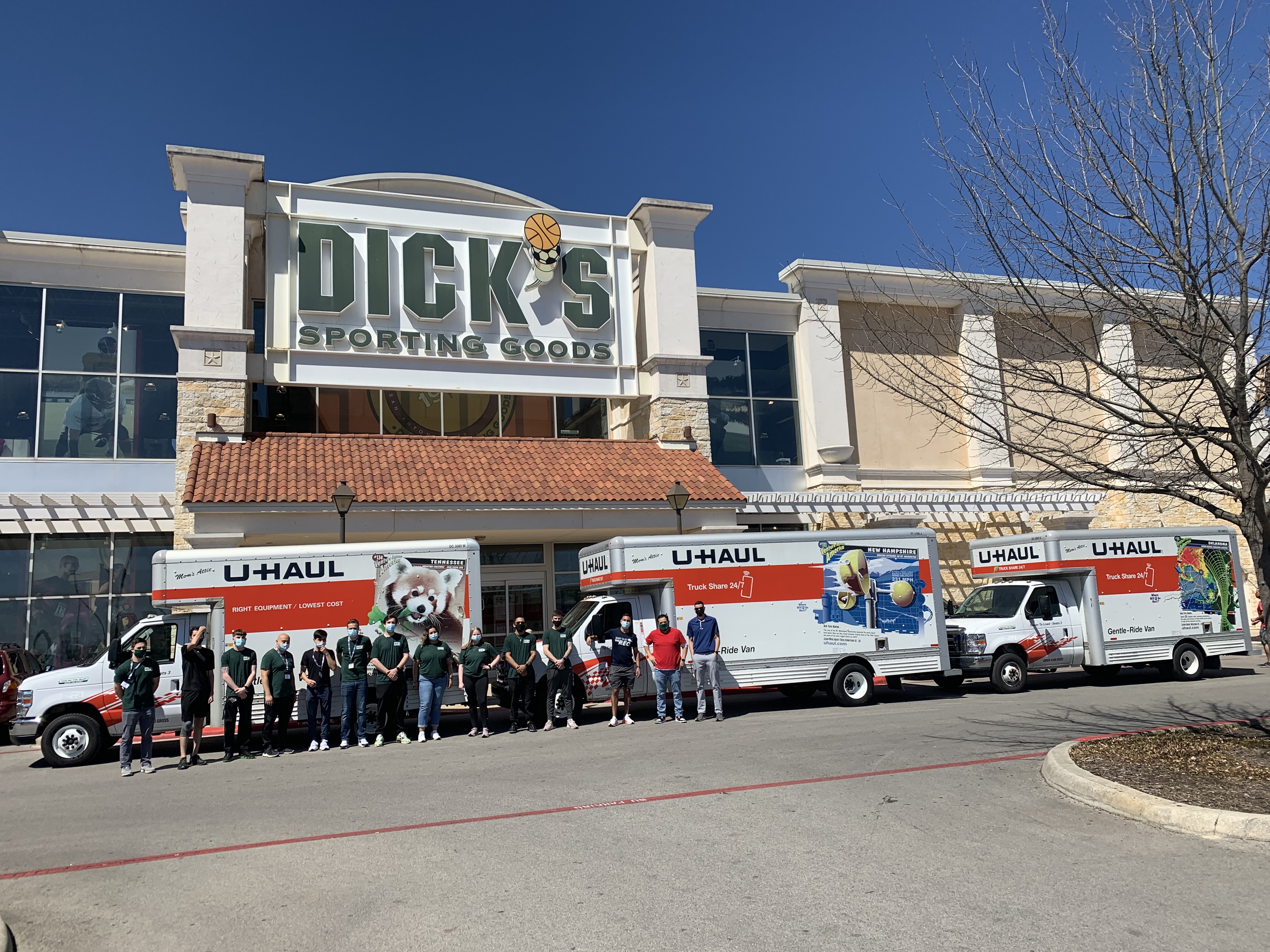 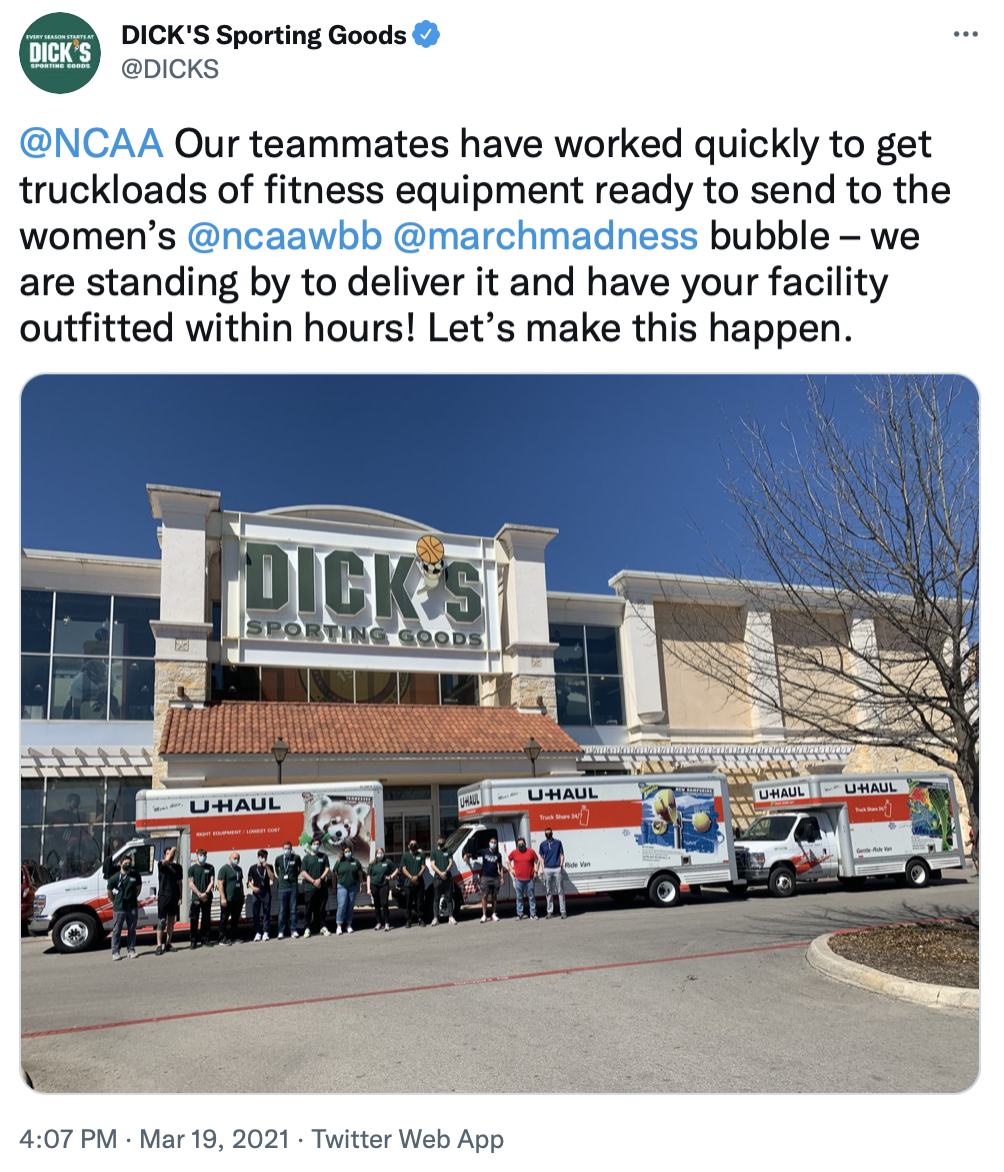