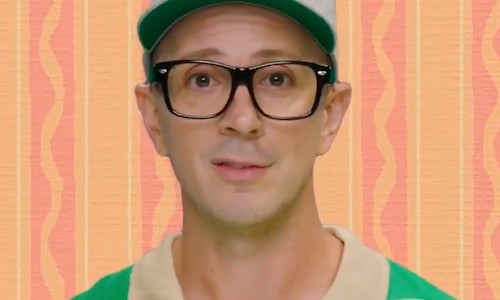 In 1995 Blue’s Clues made its debut on Nickelodeon and children quickly fell in love with Blue, Mailbox, the Spice Family, and of course our host, Steve. 25 years later, we wanted to celebrate the anniversary of Blue’s Clues by reaching those same kids and reminding them of their childhood memories watching the show.

In an effort to say hello and remind fans that he never forgot them, Steve directed his now viral “Message From Steve” video. He wanted to talk directly to the fans after so many years and had some thoughts on what he could say - we suggested he should talk about how things haven't always been easy, the growing pains of adulthood, and more. The goal was to make the video heartfelt, personal, and relatable for everyone who grew up watching Steve. We wanted the video to feel general enough that it could apply to a wide range of people, but specific enough that it felt like Steve was talking directly to the viewer.

With the goal of evoking a heartfelt reaction, we hoped that the video would allow viewers to look back on their childhood memories with Blue’s Clues and celebrate all that the show was 25 years ago, and all that it still is today. Looking to reach audiences both young and old, we wanted to use social media to tell the story of just how impactful Blue’s Clues has been for more than two decades.

Early on in our planning process, we knew we wanted Steve to come back and be a part of our campaign for Blue’s Clues 25th anniversary - we needed to celebrate with the guy who started it all! While many pieces of our campaign featured all three Blue’s Clues hosts from the last 25 years, we wanted a social piece that featured Steve front and center.

Working closely with Steve on the script, we had many conversations about what would feel general enough to reach a wide audience of people, but what would also feel specific enough that it felt like Steve was talking directly to viewers. We wanted to hit on things that would feel very relevant for 25 year olds today - jobs, families, student loans - while also celebrating how far they’ve come since the last time they saw Steve.

Once the script was finalized with Steve, we were off to shoot the video! The video came together very easily as we wanted it to feel as organic as possible so it truly felt like a message from Steve to the viewers. While the original video was much longer, we knew we didn’t have a lot of time to grab viewers’ attention on social media. The final video was a two minute piece which became the viral Message from Steve that fans loved.

While we expected a great response on all social platforms, we knew that Twitter was really the spot where fans were going to share their reactions, engage, and create a larger conversation to help the video spread far and wide.

To put it simply, we were extremely overwhelmed to see the response fans had to seeing Steve again. On Twitter alone, the video received over 40 million views, 796K retweets, 2 million favorites, and over 32K replies.

While the numbers were incredible, the response from fans was even better. Blue’s Clues and Steve took over social media for days after the video was posted. While Steve and Blue’s Clues both trended across Twitter, fans shared their heartfelt reactions, their memories from Blue’s Clues, and their own memes using the video. The conversation was so popular that many social posts from fans reacting to the video went viral as well. We also saw engagement from many celebrities and brands including Blake Lively, Tori Kelly, Seth Rogen, Joe Jonas, XBOX, JCPenney, and more.

Video for A Message from Steve - Blue’s Clues 25th Anniversary 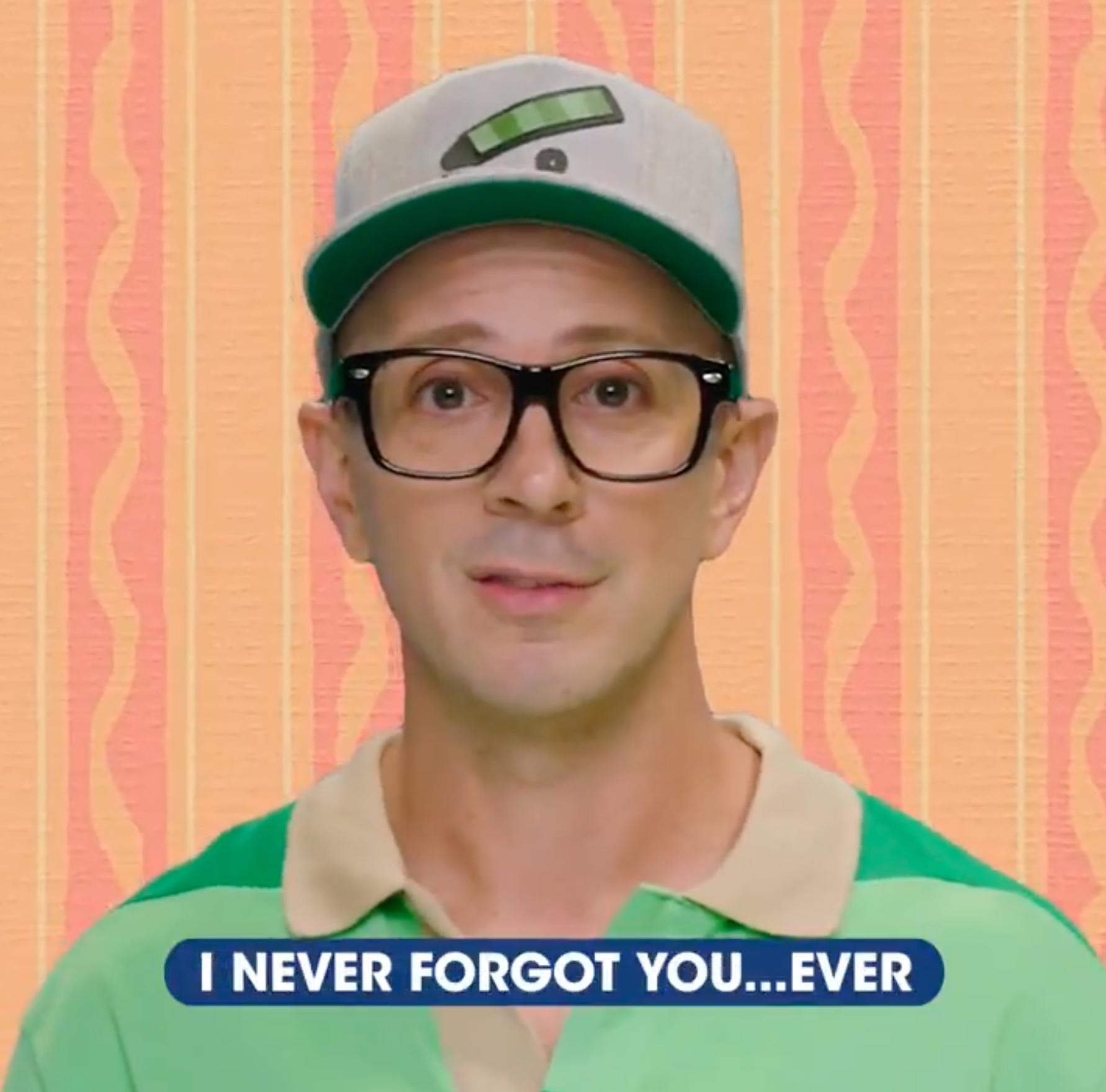 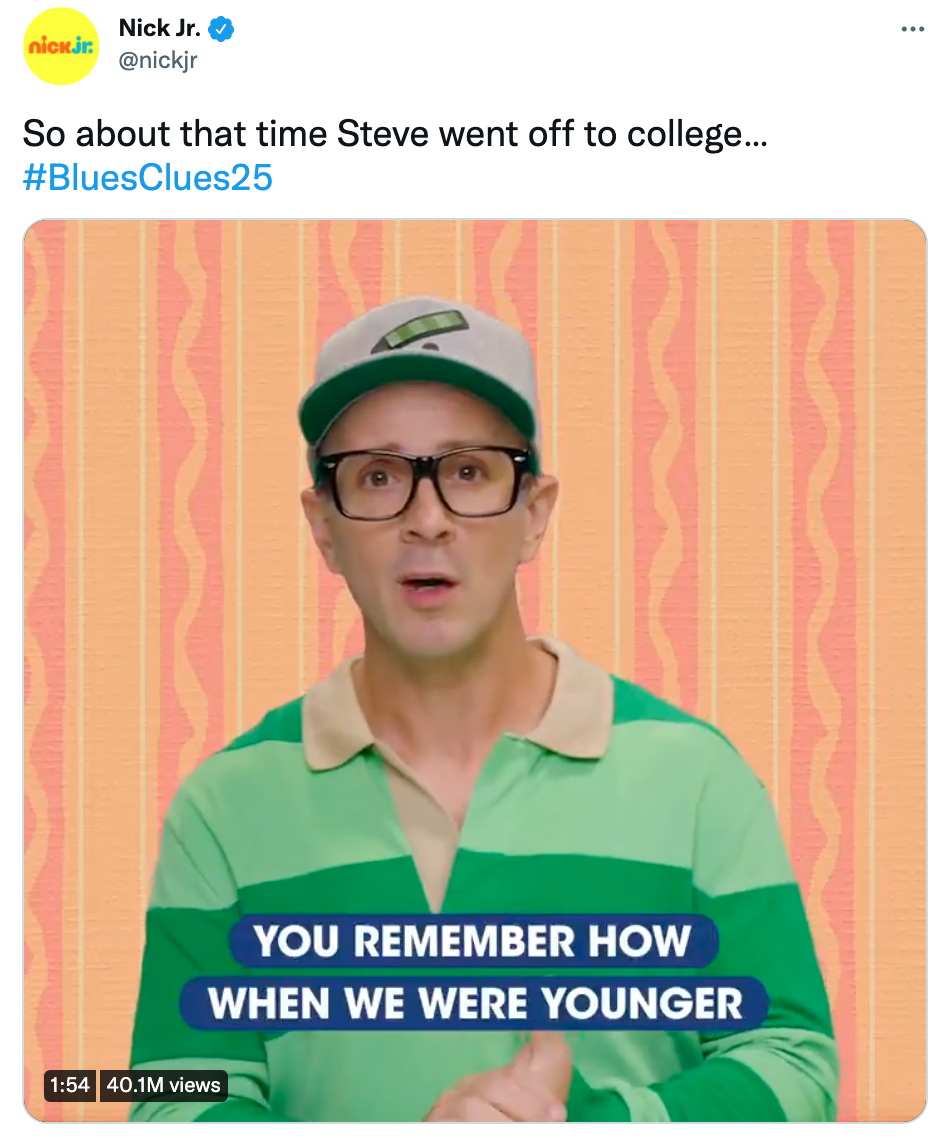