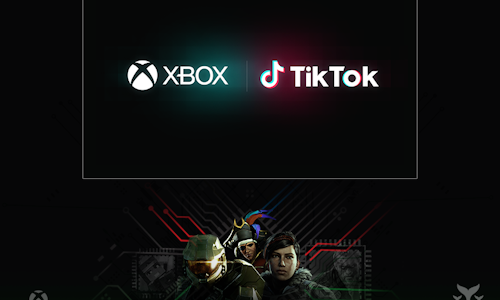 2020 was a huge year for gaming, and not just because more people were staying at home. It was a year that saw the launch of the next generation of video game consoles: Xbox Series X, Xbox Series S, and PlayStation 5.

To gain the edge with Gen Z, we knew we needed to not only break through the noise, but show up in a way that our competitors would never do.

How could we do this?

The answer was simple: join TikTok and become its favorite gaming brand. We knew gaming was TikTok’s #2 most viewed vertical, with 81% of TikTokers saying they had played a video game and 53% saying they played games on a console.

Our strategy was simple:

To achieve these goals in an authentic way, we did the opposite of what most brands do when they join TikTok.

We didn’t use influencers.

We didn’t start a hashtag challenge.

Instead, we took community chatter and turned it into ridiculous, self-aware content featuring the new Xbox Series X and Xbox Series S.

The hottest topic in gaming at the time was how the next-gen consoles looked. Memes were all over the Internet comparing the new Xbox consoles to fridges, washing machines, speakers, drive-through ordering posts, and other mundane or humorous objects.

Rather than bristle at the criticism, we embraced the conversation. In our very first TikTok post, we acknowledged and leaned into the comparison memes, while simultaneously providing close-up looks at our next-gen consoles.

At the start of our first video, we told our fans through VO that we were “trying to figure out what our first post on TikTok should be”—should it focus on the Xbox Series X or the Xbox Series S? As we searched for footage of our consoles, we “accidentally” scrolled through a camera roll filled with the absurd comparison memes that had been circulating on the Internet—including Photoshopped images of the head of Xbox, Phil Spencer—bookended by authentic shots of the new hardware. To wrap up the post, we asked fans which console they wanted to know more about and soon followed up with a video of the winner: the smaller, more affordable Xbox Series S.

To produce these videos, we skipped the fancy cameras and highly polished CG used in trailers and showed the consoles raw, shot with a phone, like a video our fans might see posted by a friend. Adopting a casual voice and tone, and making creative use of in-app effects, we showed off the product features while generating hype for the upcoming November 10 launch of the next-gen consoles.

Fans were surprised and amused by our self-aware approach, and many expressed shock that a major brand was not only attuned to community chatter about its product but was openly embracing the less-than-flattering memes.

The consoles’ notoriety in the meme world could have been perceived as a weakness, but by displaying humility and joining the fun, we turned it into a strength and created an authentic moment for the brand. We were no longer vulnerable to people making fun of our consoles because we had done it ourselves.

With this approach, we effectively subverted expectations, built trust, and connected deeply with our new audience.

The results of our initial foray into TikTok exceeded our wildest expectations. Our videos constituted the #1 gaming-brand launch on the platform, and Xbox catapulted and catapulted to 1 million followers in a month while maintaining 6x the likes of our competitors.

Here’s a selection of some of the comments we received on social media, from ordinary people (perhaps some of the same ones who had been posting the memes):

In addition to garnering tens of millions of views from our target audience and praise from our competitors’ fans, the Xbox TikTok launch generated earned-media coverage in top gaming outlets, including GameSpot, GamesRadar+, DualShockers, Game Rant, Game Informer, and more.

By focusing on entertaining our audience instead of selling our product, we were highly successful in tapping into the platform’s culture in an authentic way. TikTok always tells brands to “make TikToks, not ads.” We lived this wholeheartedly with our campaign to bring the next generation of console gaming to Gen Z. 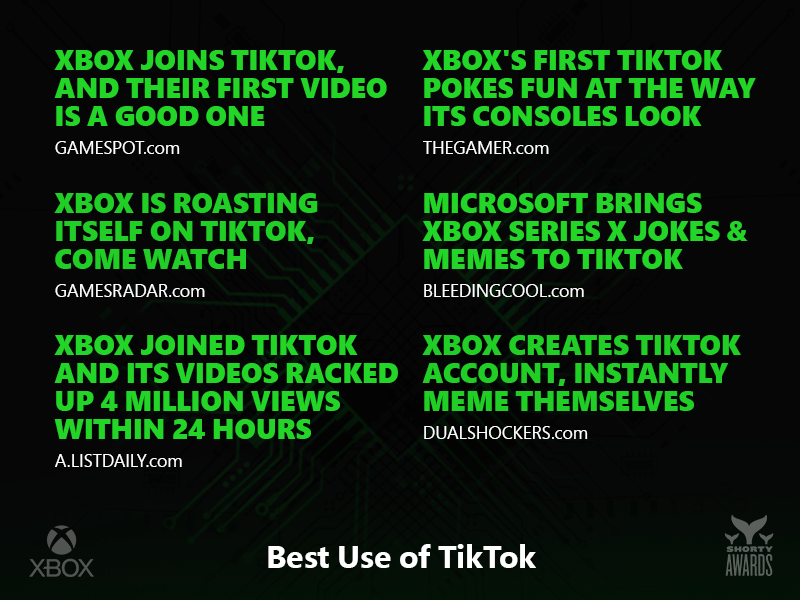 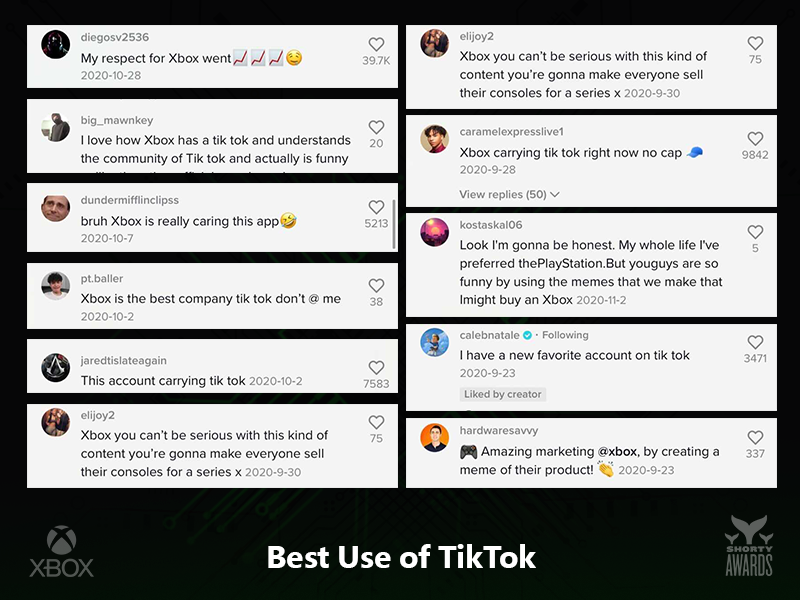 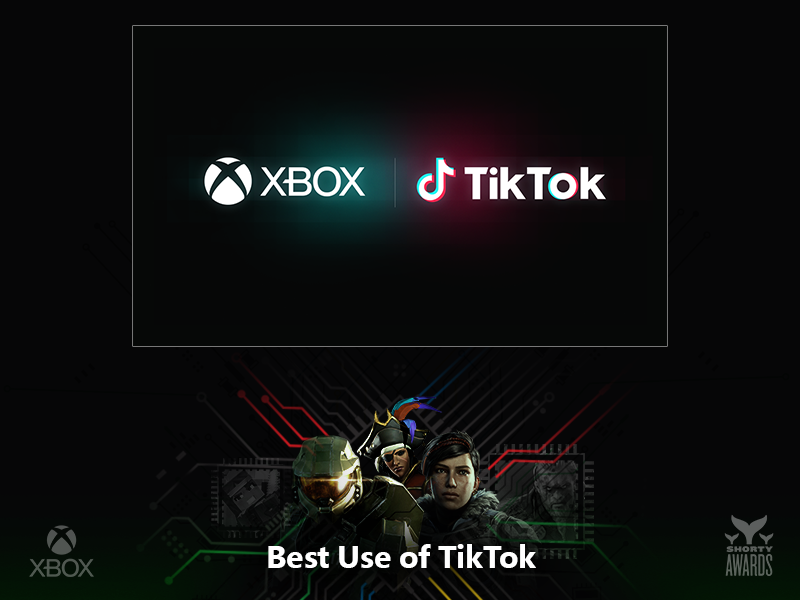