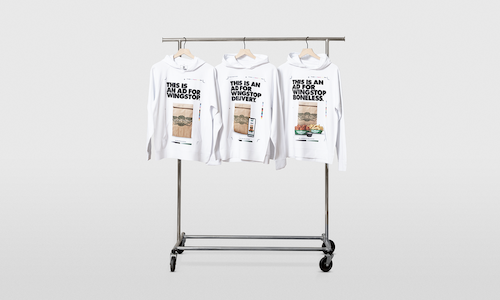 Wingstop has always said it has the best fans in the restaurant business. This cult fanbase doesn’t just eat Wingstop excessively, they also live and breathe the brand, repping their Wingstop passion loud and proud on social media. Wingstop fans have more flavor than anyone else. So, rather than spend money on traditional out-of-home billboard advertising, Wingstop repurposed a portion of their out-of-home budget to engage the fans that are living Wingstop advertisements and fed that fire -- making them literal walking, talking Wingstop advertisements for mouthwatering boneless wings and nationwide delivery. In the campaign titled, “Wingstop Wearable Billboards,” the Wing Experts went the extra mile to turn anyone into a Wingstop influencer by paying fans to do the advertising for them by wearing and creating content in free, Wingstop-branded merchandise.

Wingstop’s strategy was laser-focused on fans, encouraging a slew of user-generated, flavor-filled content on social media. We took our out-of-home artwork and transferred it onto 1,000 hoodies, letting our fans rep, “This Is An Ad For Wingstop” proudly across their chest.

Wingstop looked to both the runways and the street for inspiration. We found that contemporary fashion trends revolve heavily around fandoms, especially styles that look cool and feel self-aware. With a classic white background to mimic traditional promotional advertising and a prominent Wingstop ad on the chest, the sweatshirts aren’t just your typical brand swag, they unapologetically declare you a Wingstop fan because Wingstop isn’t just a meal — it’s a flavor experience.

Three sweatshirt designs pushed distinct Wingstop messaging. The first read, “This is an ad for Wingstop” with an image of the classic branded paper bag. The second promoted Wingstop delivery, with text, an image of the bag and a mobile phone. The third highlighted the boneless wing offering. With a Wingstop logo on the back of the shirt, wearers were effectively turned into two-sided billboards.

When it came time to claim their “billboard,” fans visited Wingstopwearablebillboards.com and we quickly shipped out sweatshirts, offering fans $10 to post a photo of them wearing the merchandise on Instagram. We also teased bonus prizes for fans that take their Wearable Billboard to interesting spaces and places.

Proving the power of the Wingstop fanbase, the sweatshirts supply ran out in 90 short minutes. Wingstop engaged brand-fan influencers across food, sports and lifestyle verticals to drive awareness for the program, with Renzell Roque and Hungry Hugh serving as two examples.

The “Wearable Billboards” campaign garnered user-generated content to then leverage on Wingstop social channels, giving a way to shout out fans while unapologetically advertising Wingstop’s product.

We set out to prove that our fans, as nano-influencers, could beat the return on investment of traditional billboards, and did just that. Fans created 95 Instagram posts in their wearable billboards. With a CPM of just $0.31, Wearable Billboards beat the average national billboard CPM by 94% (AdQuick). And, when COVID-19 created a tricky landscape for brands, our fans got creative and continued to spread the nationwide delivery message when people needed delivery more than ever. 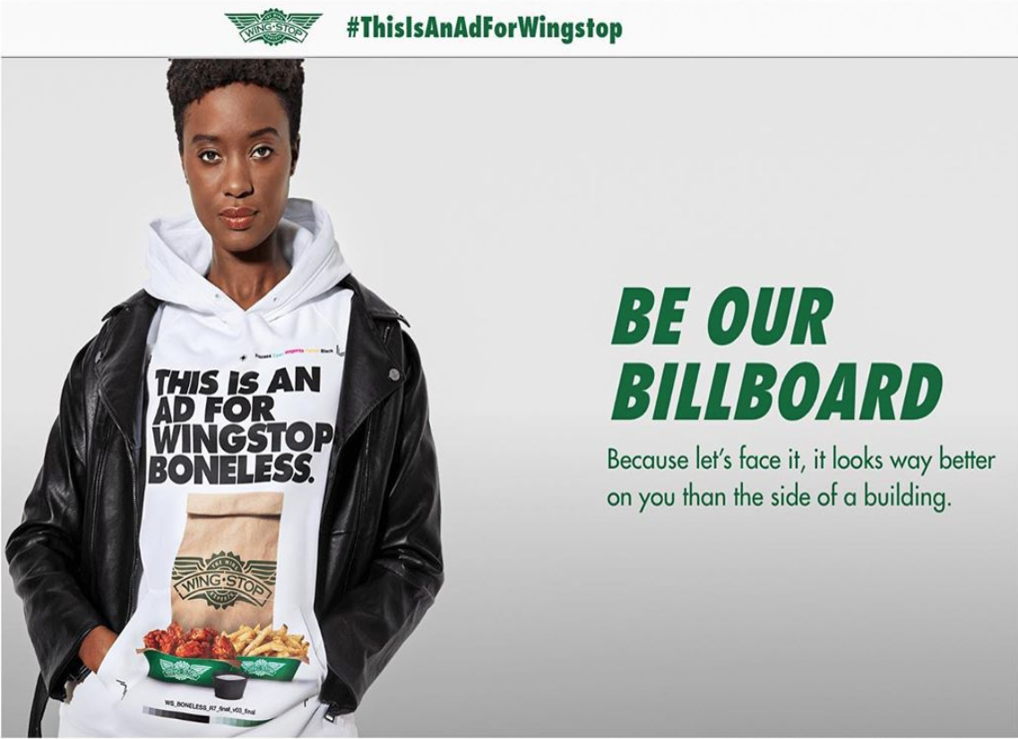 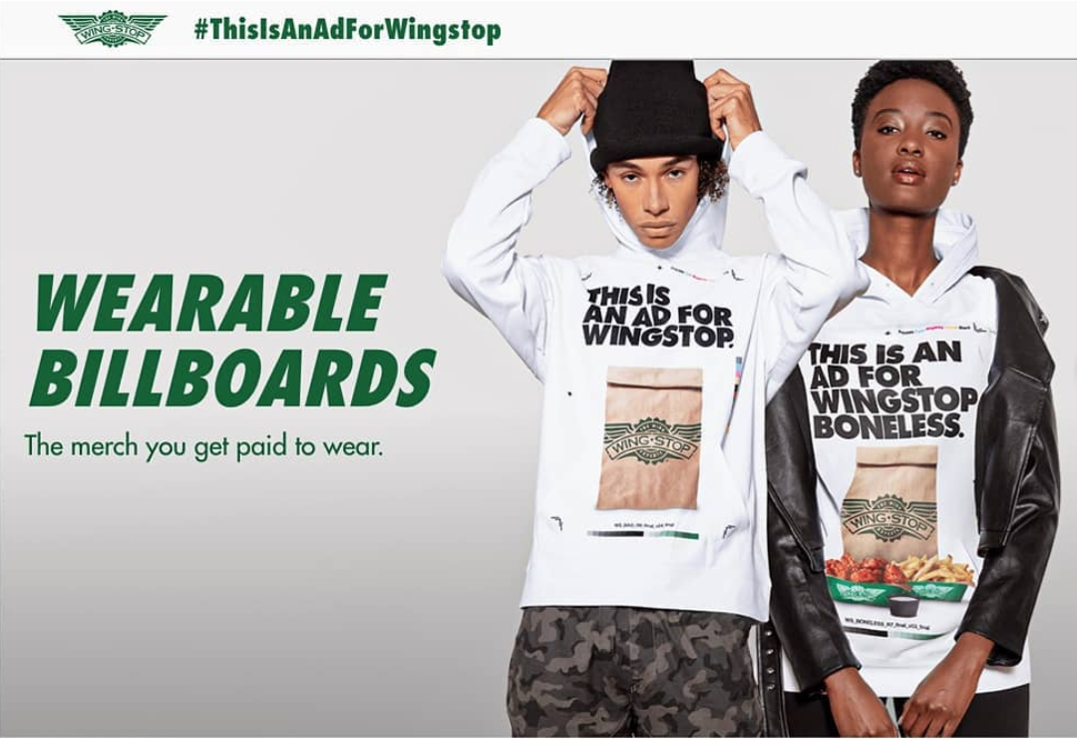 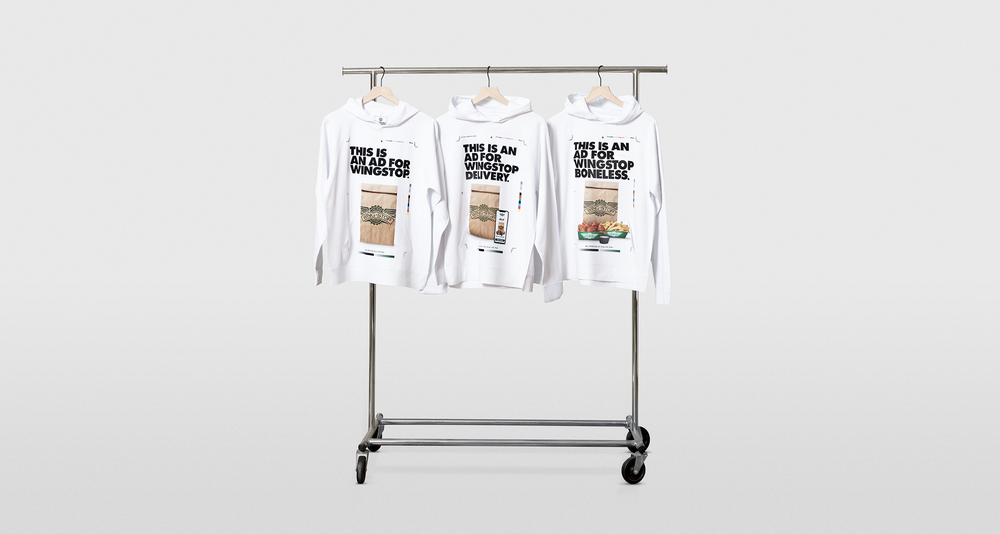