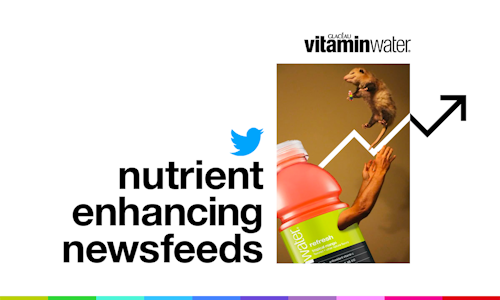 In 2020, we worked to humanize vitaminwater’s voice in social, cutting through the clutter of “Brand Twitter” by creating a unique, relevant and relatable persona representing the vitaminwater community manager. Through an “always-on” approach and real-time response process, we subverted trending moments and conversations on the daily, galvanized a groundswell of our most loyal fans into an army of vitaminwater BFFs known as the “wet_fam,” and stayed true to who we are and how we serve our community, even during one of the most tumultuous years that was 2020.

vitaminwater’s mission for the year was to be an active contributor of Internet culture. To build strong communities of like-minded, nutrient-enhanced-beverage-loving users who were thirsty for content that subverted the expected. We began by building wet_fam: a group of 100 of our most loyal and engaged fans who could not and would not stop asking, “will you sponsor me?” Unlike most other brands who say, “no,” we decided to say, “yes,” and began to flip the script on the influencer industry by making it possible for anyone to be sponsored by a major brand.

Throughout the beginning of 2020, vitaminwater’s Twitter handle interacted with our audience from the perspective of the account’s Community Manager (CM), humanizing itself with a fun, irreverent narrative and an effortlessly relatable tone. Every day, vitaminwater’s CM continued actively engaging in trending and relevant moments in real time, subverting expected conversations and bringing a unique, sometimes opossum-related view to things within culture. But then, Covid-19 hit.

We quickly realized that irreverent humor wasn’t what the world needed. There was no way for vitaminwater to subvert the next 6 months when our nation’s deep-rooted racial injustices were laid bare, and protests rippled across the country. So, we went silent. We put our voice on pause to allow more important voices to be heard, waiting until people were ready to hear from us again. Through persistent social listening and careful execution, we came back in September 2020, and were met with resounding fanfare.

Our return to Twitter was as if we had never even left, posting a series of outdated memes and formats that had trended during our absence. The response was overwhelmingly positive, showing that our small-but-mighty community of less than 150k Twitter followers had a strong connection to vitaminwater, most especially amongst our wet_fam members.

We went on to engage our audience in more 1:1 experiences at the end of 2020, such as playing popular video games with them and empowering them to create vitaminwater content. And as we look forward into 2021 and beyond, it’s these kinds of unique and customizable interactions that we look to nurture as we continue to grow our following and challenge ourselves to upend the status quo of what it means to be a part of “Brand Twitter.”

Despite only being active during the first and fourth quarters of 2020, with a total of 150 posts over 109 days, vitaminwater gained +10.4k new followers on Twitter.

We also managed to secure an overall 93% favorable sentiment on Twitter, surpassing our benchmark from the previous year.

Our most engaged post of the year—the thread of “stale memes” published at the beginning of our return to Twitter—generated 75.4k impressions and 729 engagements.

All of this was achieved with zero paid media on Twitter, relying solely on our organic community. 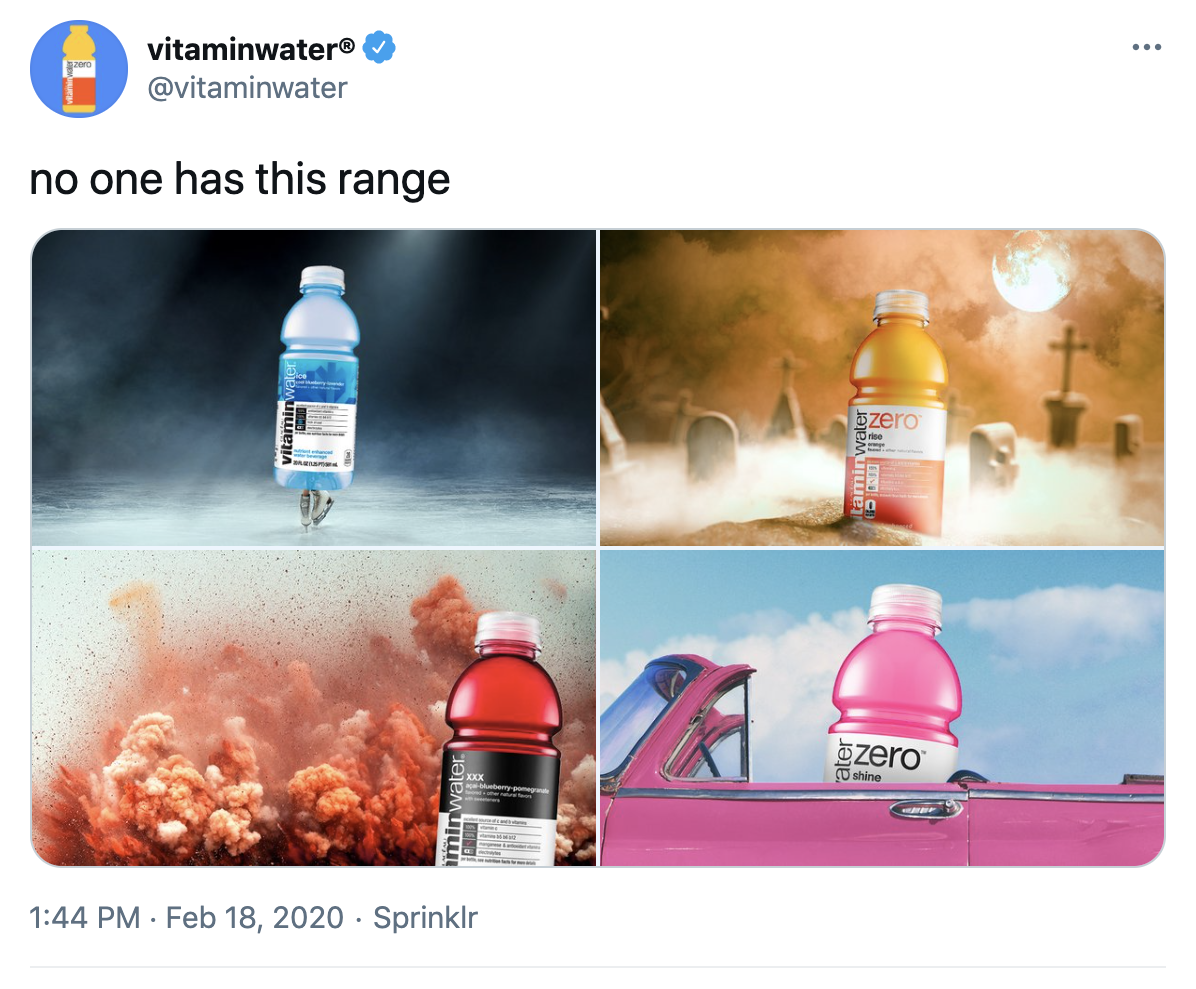 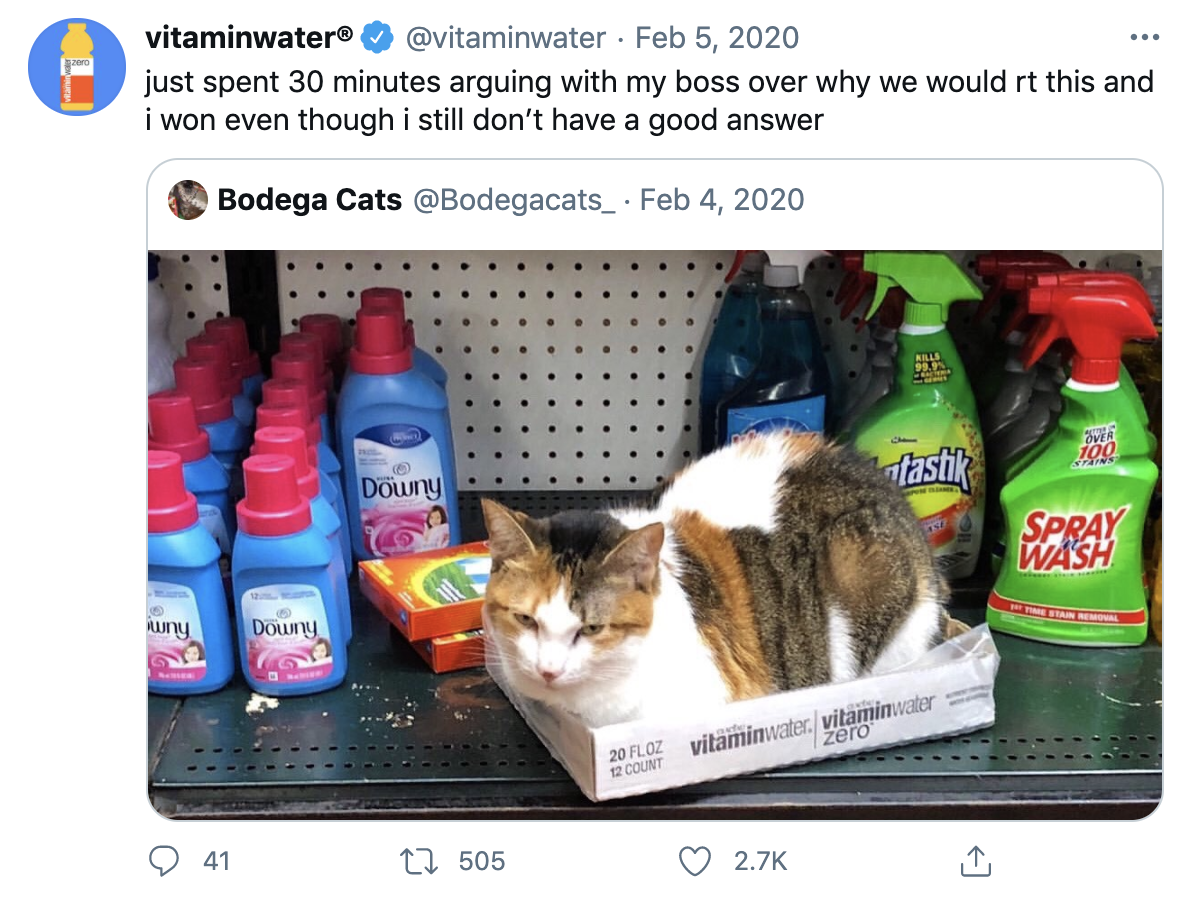 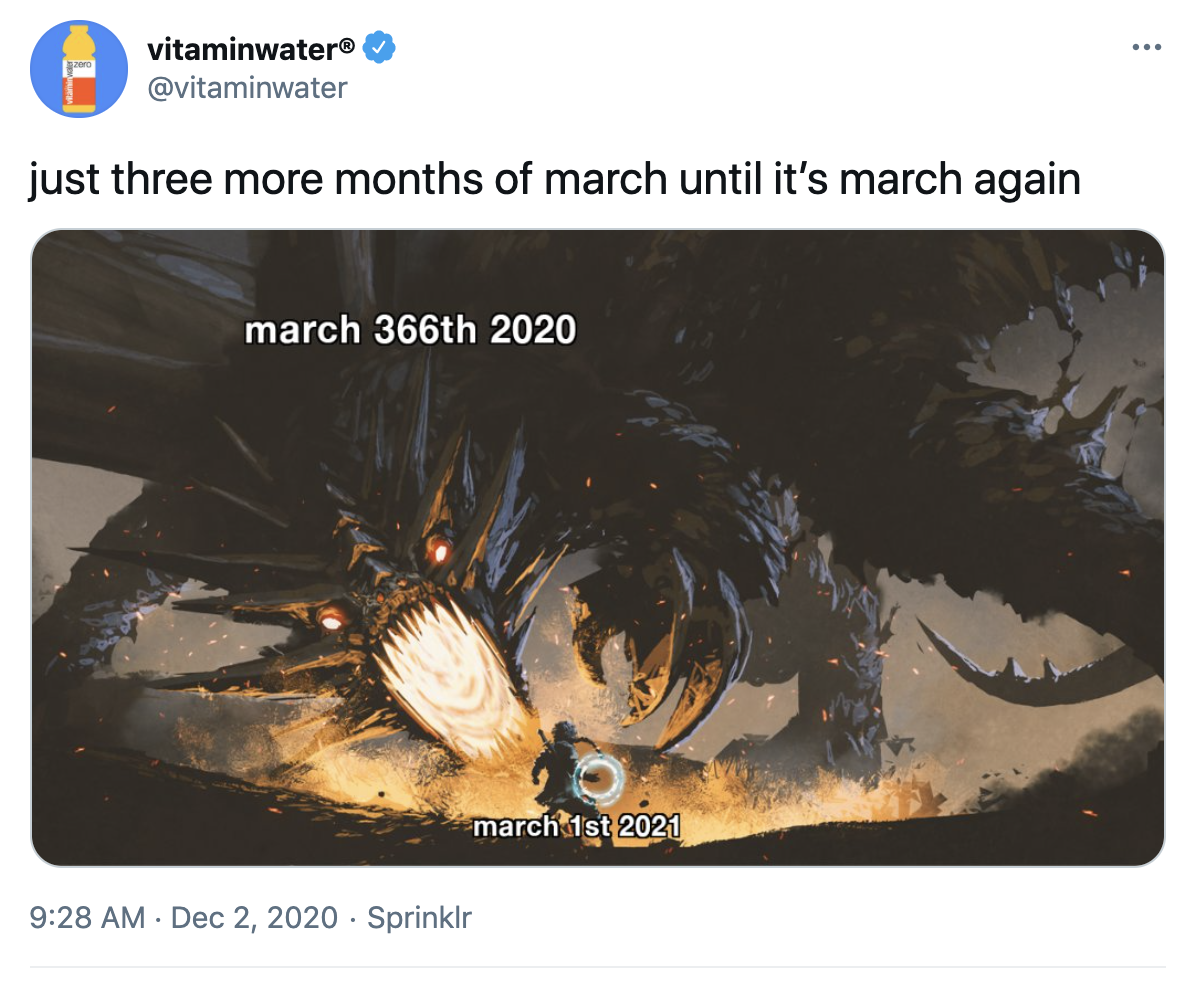 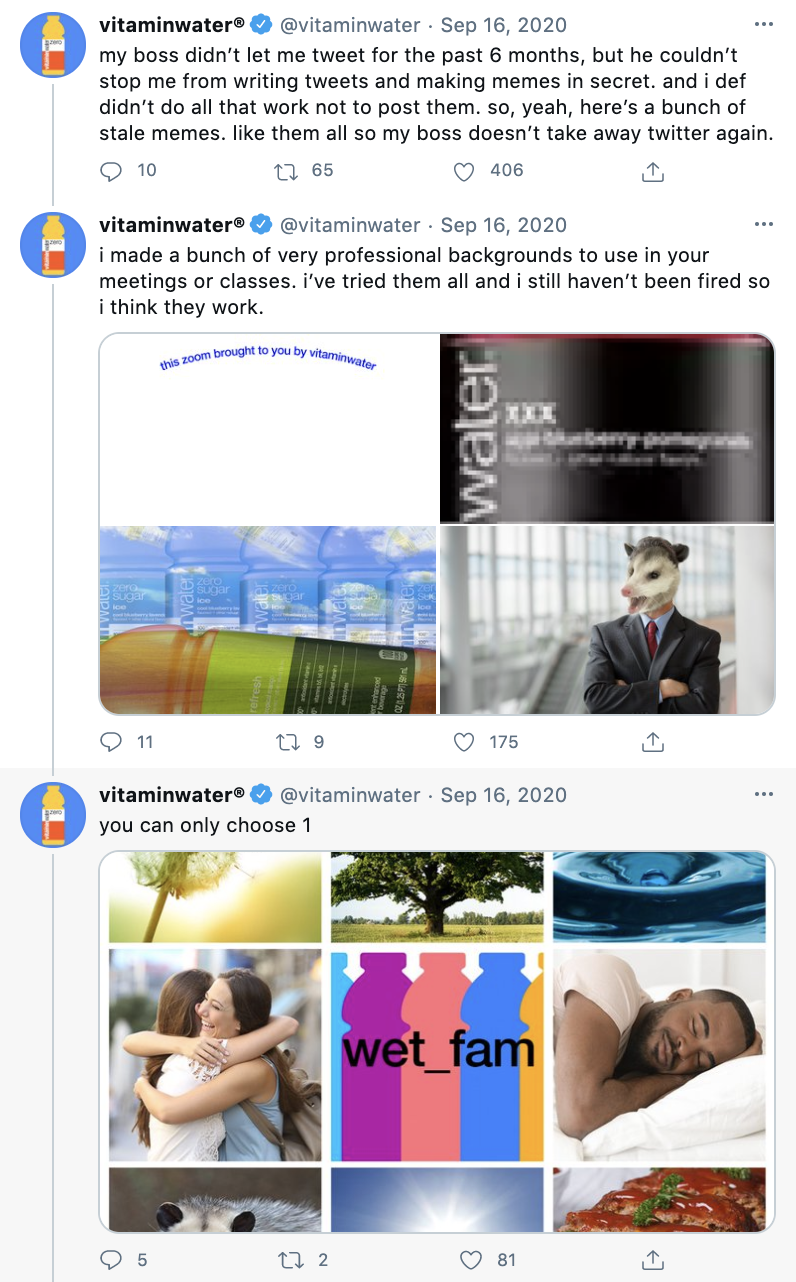 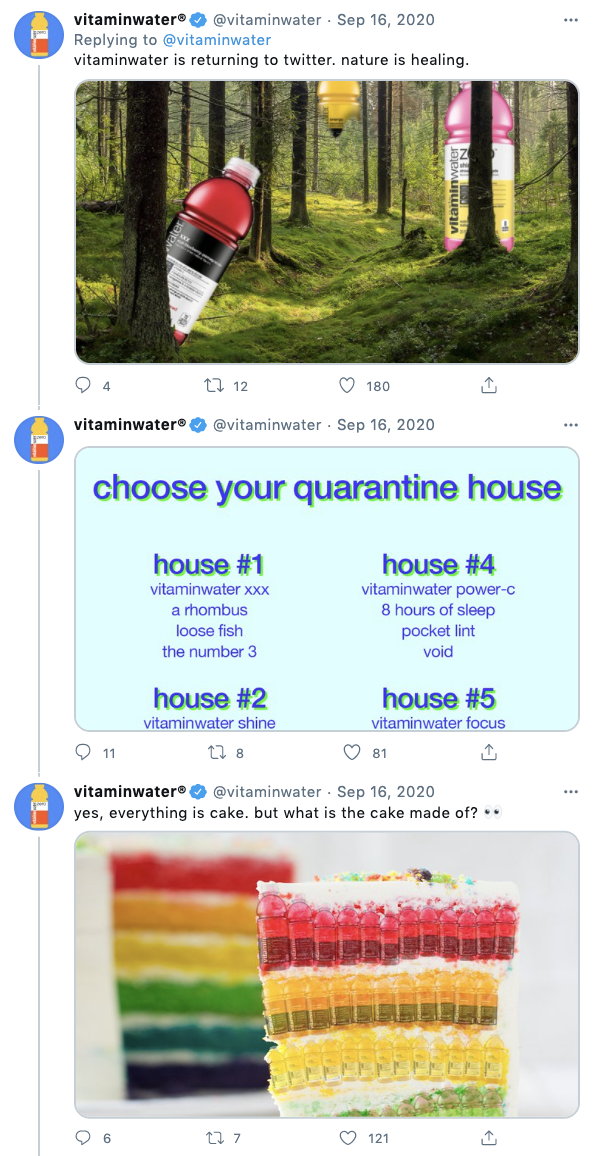 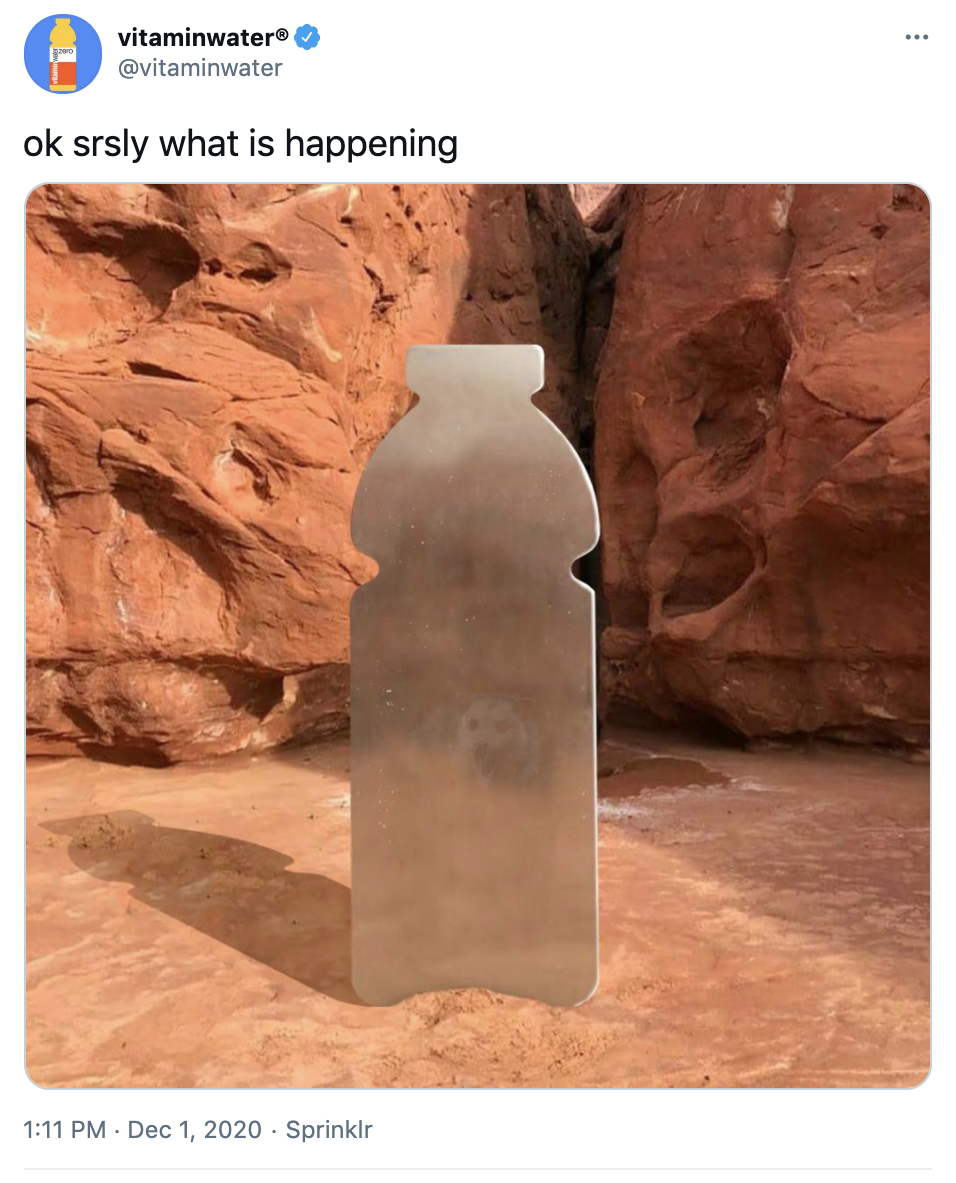 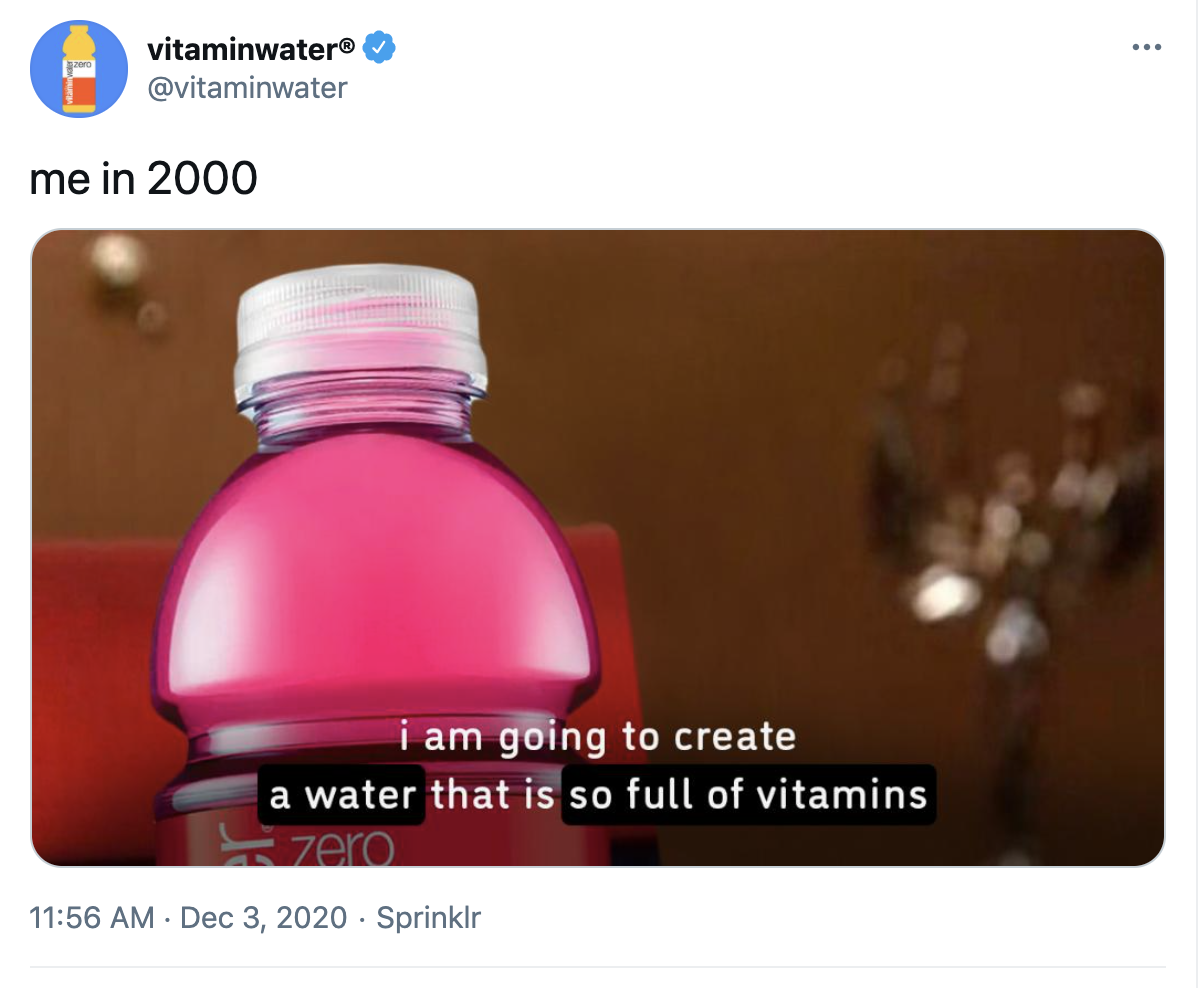 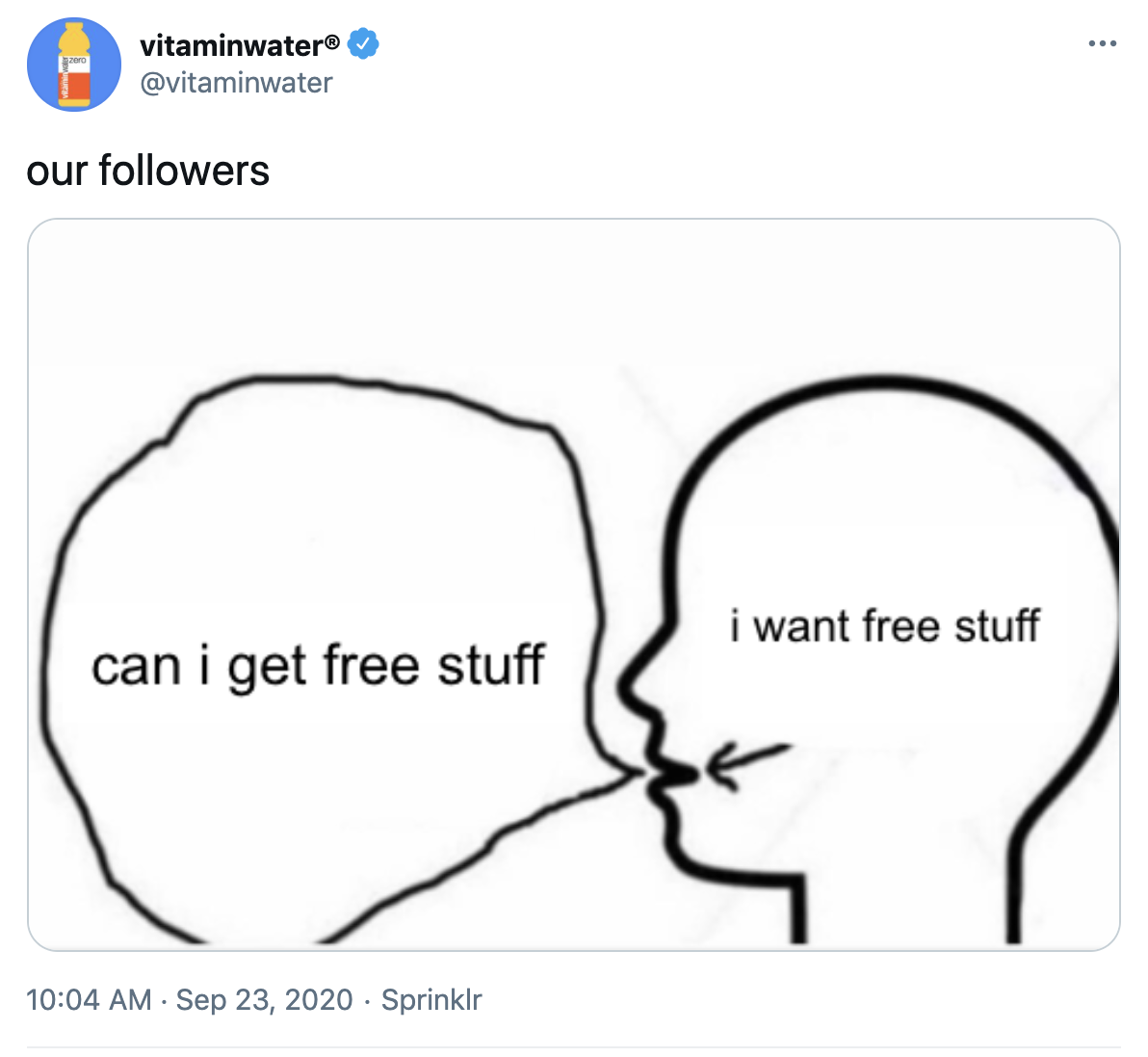 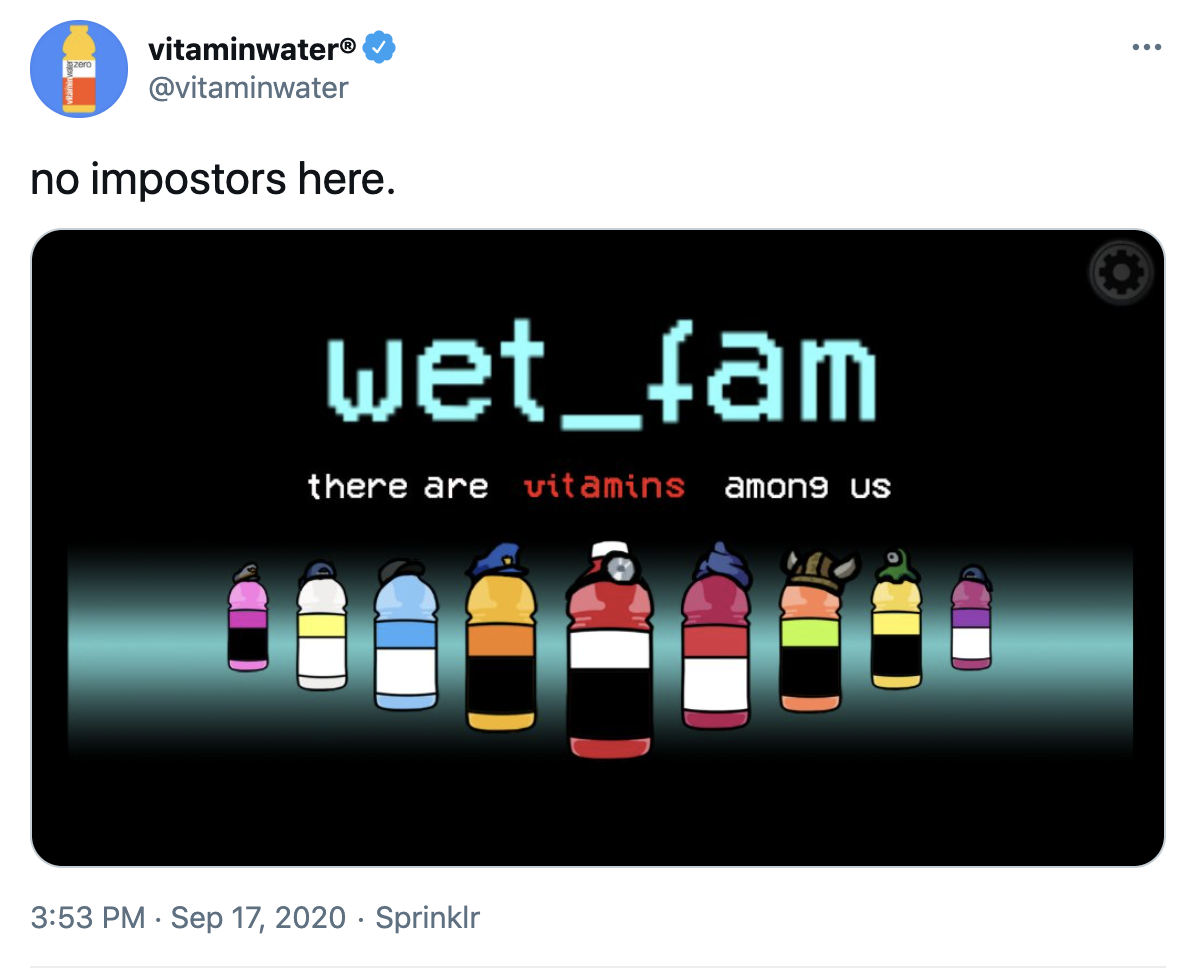 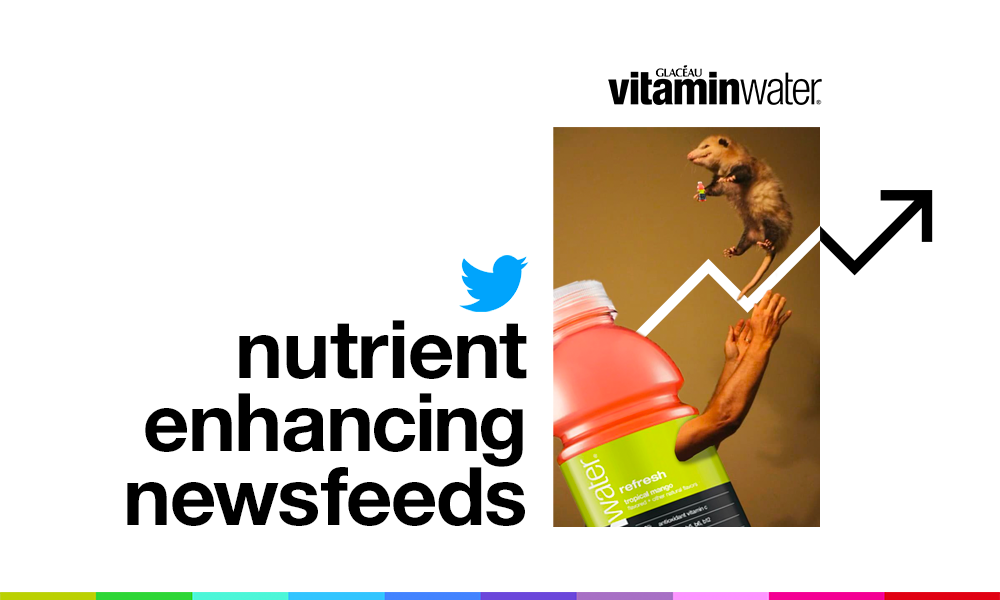