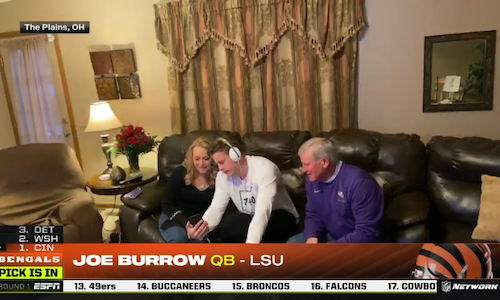 Mere weeks away from the event, for the first time in NFL history, the Draft, a typically buzz worthy  live event for the players, League and brands alike, pivoted to being held virtually. As the “Official Sound” of the NFL, not only did Bose collaborate with league partners to provide quality communication, they partnered with 46 of the 58 NFL Draft rookies during a life-changing night to support them in one of the biggest moments of their career. For the first time, the #1 overall Draft pick, and others, used Bose headphones to accept their invite to the NFL.

In addition, Bose worked with the League, all 32 NFL teams and media partners to equip them with Bose’s best-in-class products for a successful virtual Draft. This included gifting headphones, headsets and speakers to remote coaches, staff, reporters, players, their families, and even the NFL Commissioner, positioning Bose as an integral thread in holding the Draft together. The brand’s unrivaled sound quality and its array of products throughout the homes of rookies, teams and League members allowed Bose to own the night as the Official Sound and proved that cutting-edge sound technology is endemic to sports on and off the field.

During a time when live sports were at a standstill, Bose helped bring fans into the homes of their favorite NFL rookies and gave them a closer-thanever glimpse into the greatest night of these young players’ lives. Although Draft was no longer taking place together in Las Vegas, witnessing the top players take “The Call” from their childhood homes with their closest family and friends was a new and uniquely personal moment for fans to experience.

With the very first virtual Draft taking place in only a few short weeks, Bose kicked into action to make sure that all members of the League, NFL teams and the players were well equipped with the leading sound technology, allowing them to communicate throughout the night. Bose provided headphones and speakers free of charge to any participants that requested. Teams placed orders to cover remote staff, players used a variety of products for training and at home needs and the League ensured their
broadcasters, draftees and staff had all sound products they needed for clear communication. With every headphone and speaker that was sent out, corresponding product information was shared to ensure all parties were assisted with set-up and usage.

To prepare the rookies, Bose worked with the League to create communication kits that were sent to all of the 58 players who were drafted, including those who weren’t on the Team Bose roster. These kits featured a handheld device and Bose headphones for players to use to call-in to their formal video chat interviews on NFL Network, as well as other networks who covered the Draft. This was highlighted on NFL social, digital, and broadcast. The 46 Bose rookie partners were given headphones to take “The Call” with and were each provided a how-to video outlining the best way to set up and use Bose headphones. Throughout the weekend, Bose headphones were featured in Draft Live Streams, including all 32 NFL team live streams and received nearly two hours of on-screen broadcast exposure during the 2020 NFL Draft, proving to play an important role in bringing the 2020 virtual Draft to life.

In addition to providing all headphone and speaker products needed for the 2020 NFL Draft free of charge, Bose gave a $150,000 donation, $3,000 for every Bose player selected in the Draft, to the NFL’s three-day virtual fundraiser benefiting charities that battle the spread of COVID-19 and provide relief to millions in need. The “Draft-A-Thon” was featured across ABC, ESPN, ESPN Deportes and NFL Network April 23-25, paying tribute to healthcare workers and first responders and supporting six national nonprofits and their respective relief efforts including; American Red Cross, CDC Foundation’s All of Us, Feeding America’s COVID-19 Response Fund, Meals on Wheels’ COVID-19 Response Fund, Salvation Army, and United Way.

Bose served as the main communication catalyst for over 80% of the top 50 rookies who took “The Call” from the NFL with their Bose headphones and answered their first interview questions, for the 32 coaches and their staff who had phone calls to discuss their crucial last moment choices, and for the reporters who represented the teams from their homes throughout every round. A social post featuring each Bose rookie take “The Call” with Bose headphones was the first piece of content to go out on each of the players’ social channels post-selection. Bose was there to make sure the call didn’t drop, and the sound was clear, connecting the participants to each other and to the fans at home in real time. As a result, the brand reached over 55M viewers, 4.6M social engagements and 79% Bose share-of-voice amongst all brands activating around Draft, a 13% increase from 2019. In addition, Team Bose rookies dominated the Draft with 22 selected in the first round, including 9 of the top 10 picks and 16 out of the top 20.

In a moment when the world was being told to stay home and remain apart, Bose showed viewers that their headphones and speakers are an essential tool to keep the connection alive and make a virtual Draft possible. Their goal was to take thoughtful, helpful action to own the Draft and show Bose products as a solution in a time when communication and connection was what the world was craving. 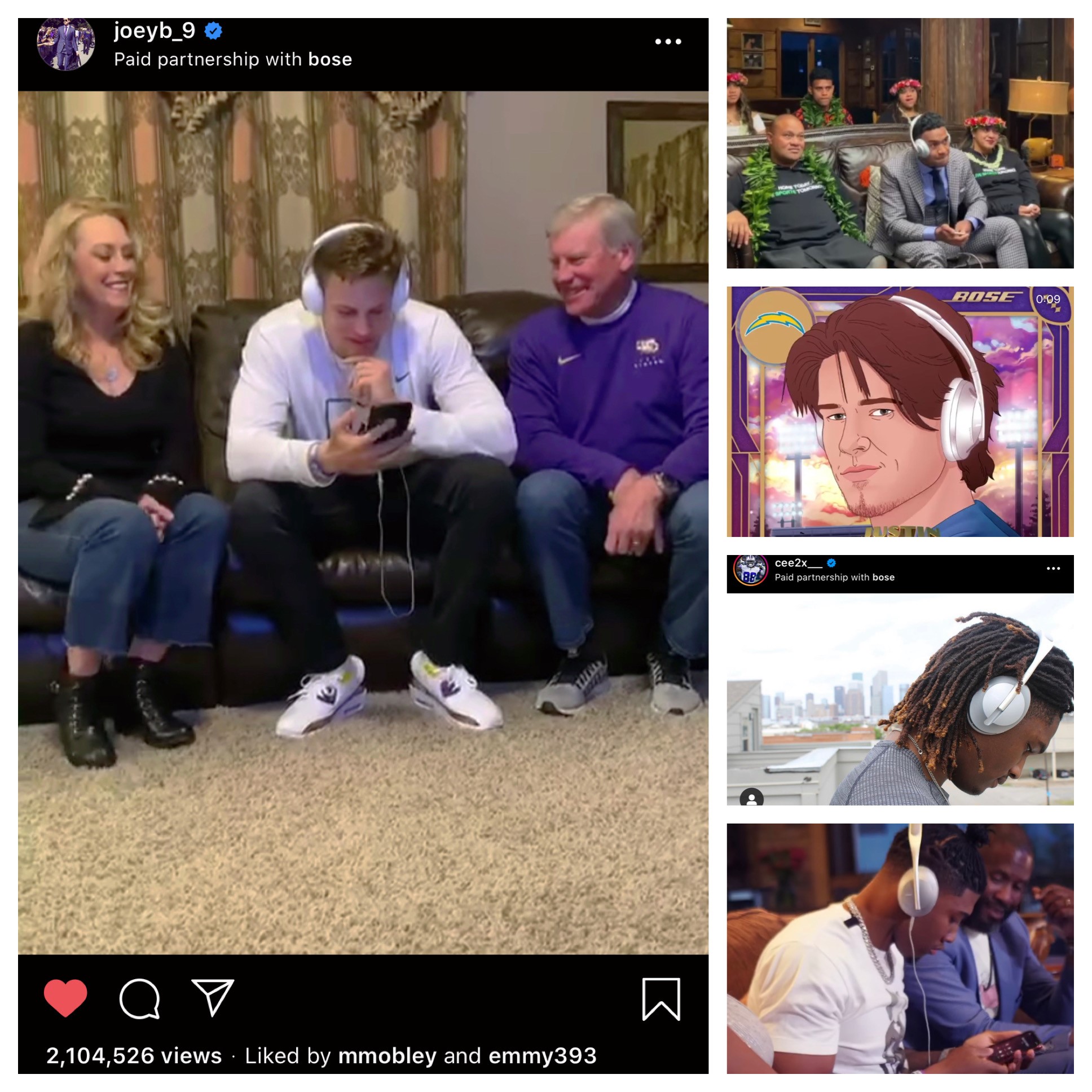 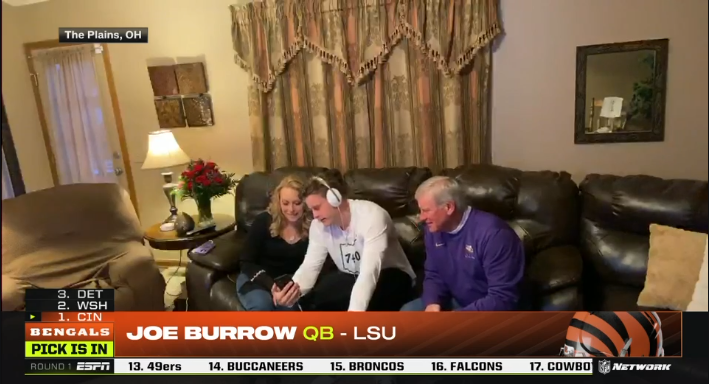 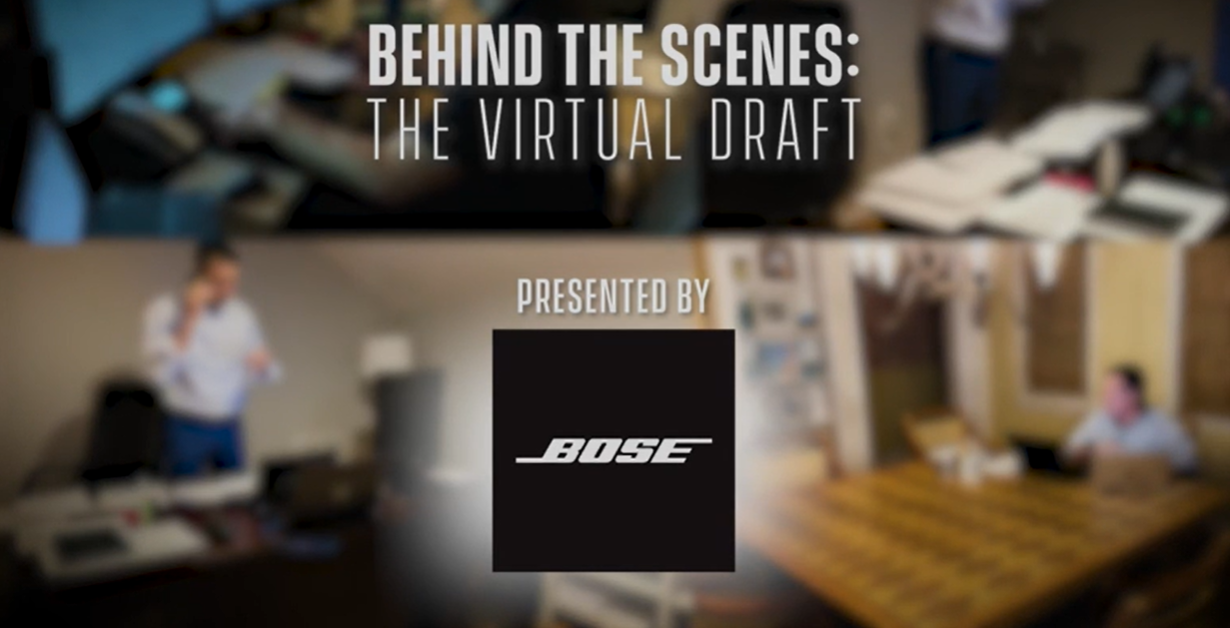 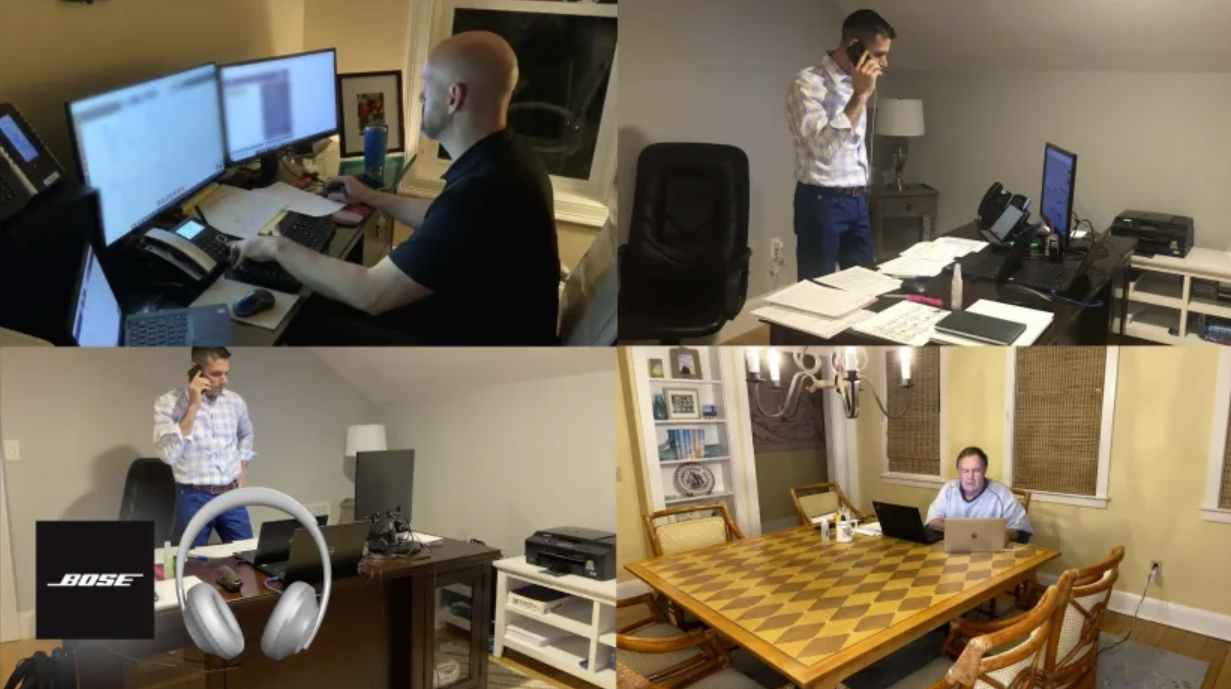 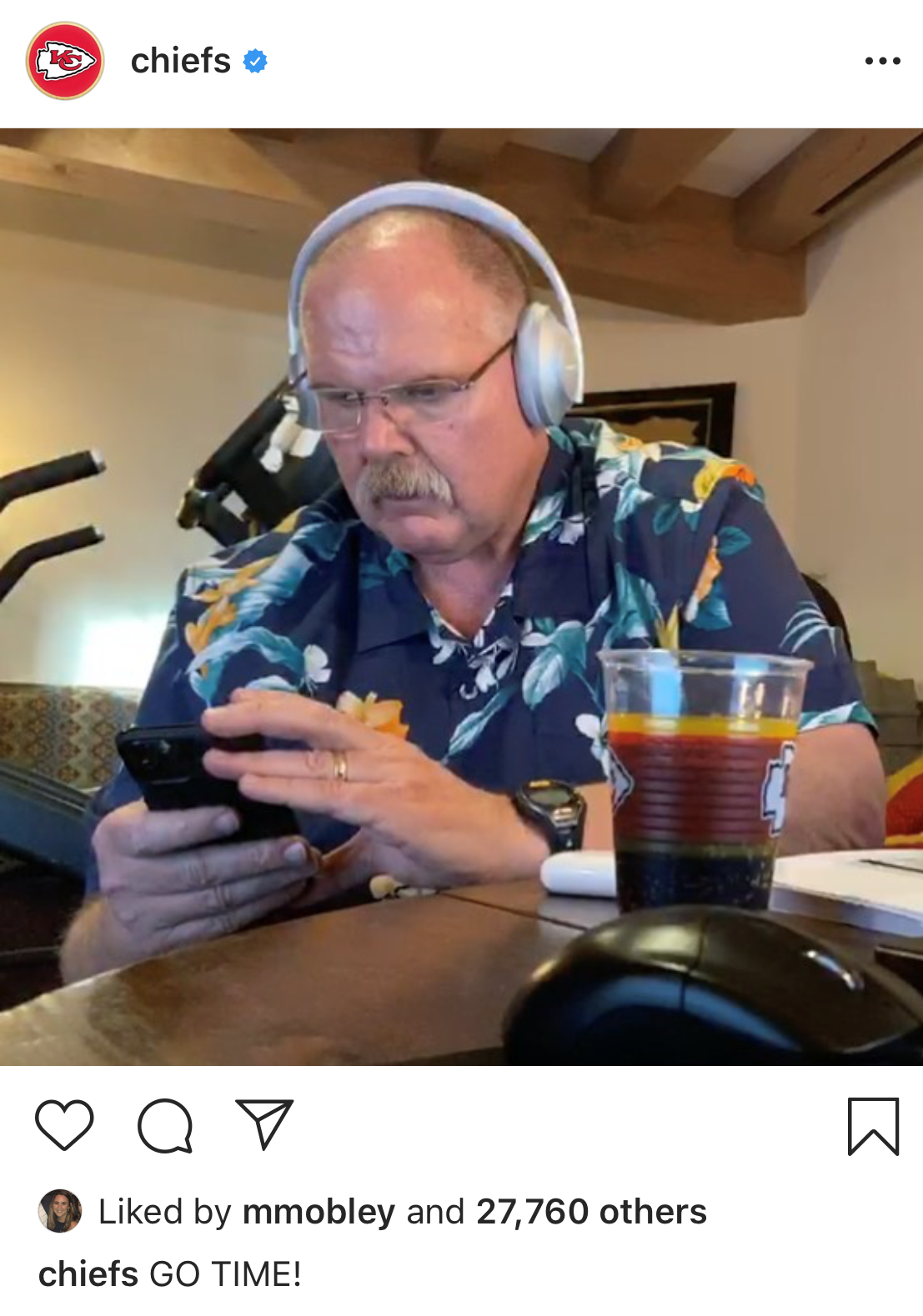 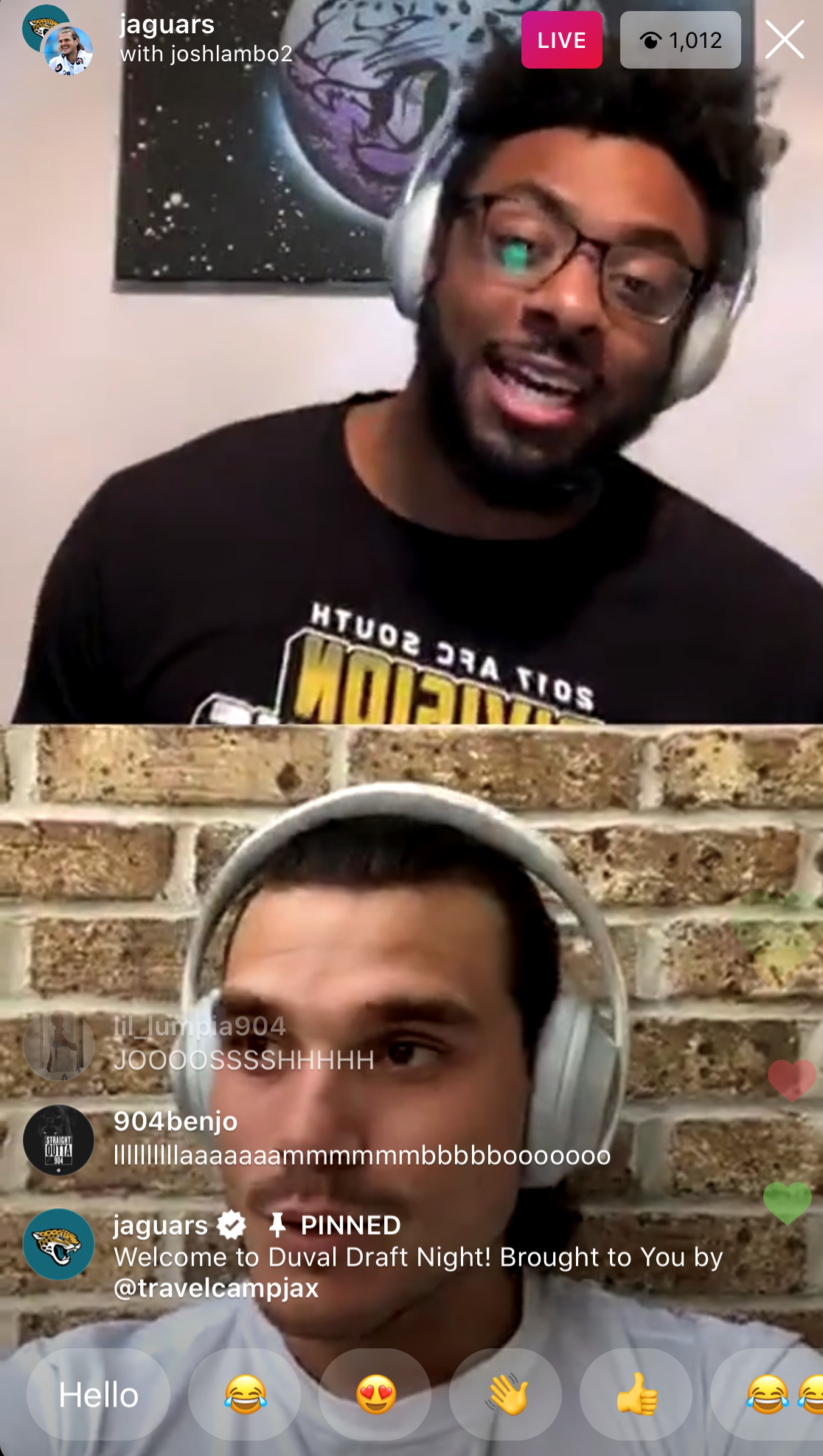 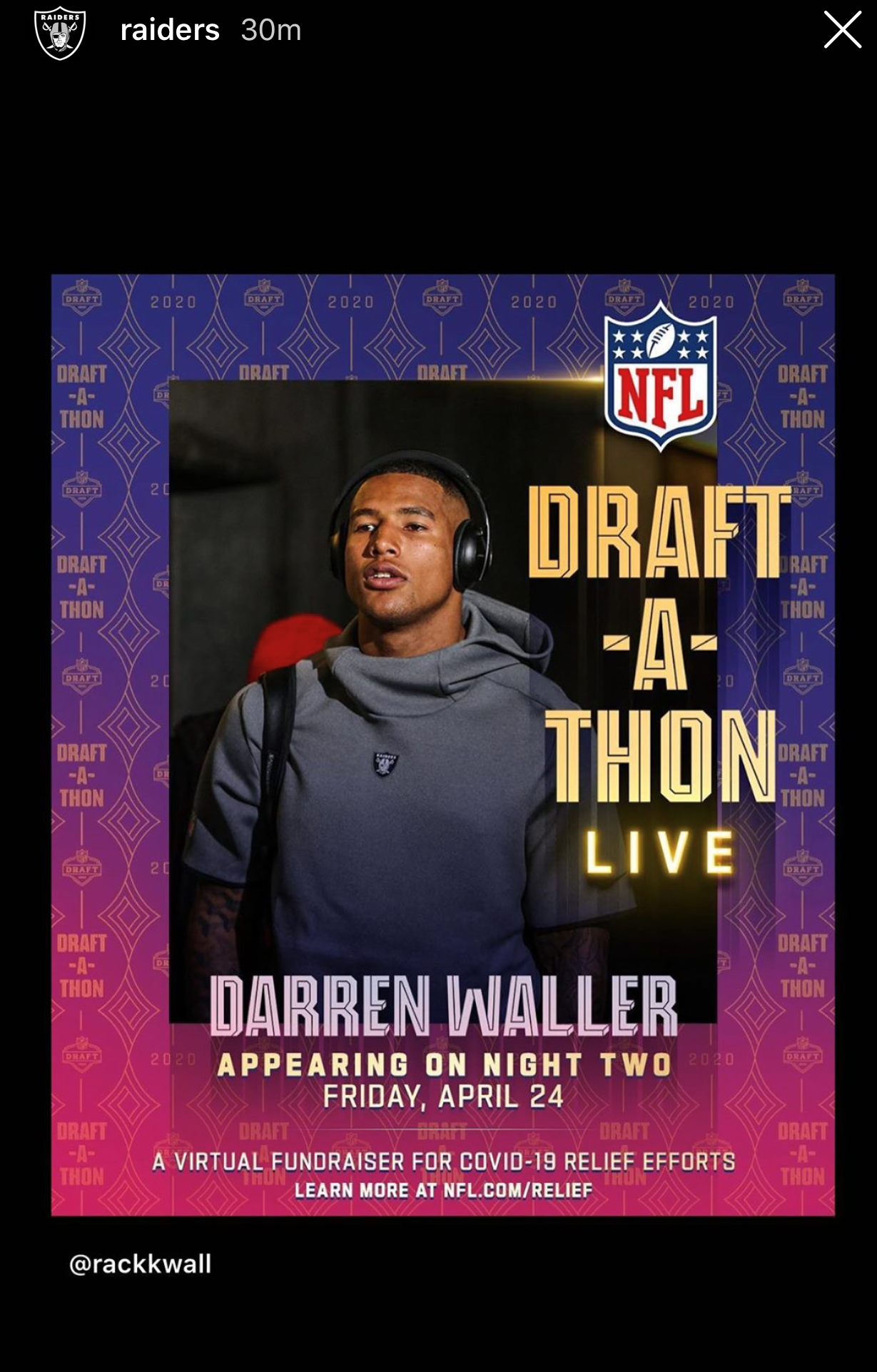