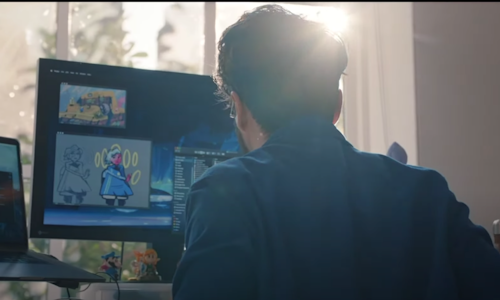 Breakwater Studios and Unity Technologies have partnered since 2015, producing more than 25 high concept films showcasing the innovative capabilities of Unity’s real-time development platform. Their latest collaboration is a five-part short documentary series that celebrates the vast applications of Unity's revolutionary software. From the automotive industry to architecture and engineering, to the video game world and Hollywood, the films highlight how Unity’s real-time 3D technology is shaping some of the world’s largest industries. This project was released in September 2020 in tandem with Unity's initial public offering (IPO).

Unity Technologies was founded in Denmark in 2004 as a video game software development company. Unity democratized the gaming world by offering an open-source engine for independent creators to enter the marketplace with giants like Nintendo and Blizzard Entertainment. Unity has since earned its place as a leader in the game industry, with more than 120 million gamers worldwide playing on Unity-designed games last year.

In preparation for the company’s public offering, the goal of this series was to demonstrate how Unity has evolved to apply its proprietary technology far beyond video gaming in recent years. Its software is now used at the cutting edge of billion-dollar industries worldwide. This series dedicates a film respectively to Unity’s innovations in the fields of architecture & engineering, automotive, media & entertainment, and continued advancements in gaming. The fifth and final film in the series, the “Anthem,” interweaves these stories to emphasize Unity’s leading role in the future of technology.

Breakwater Studios is committed to producing high caliber, handcrafted, humanist brand films. From world-class cinematography to original scoring, Breakwater embraces the full power of cinematic storytelling. Their visceral and emotive films take audiences on a values-based journey, showcasing the heart of their clients’ mission rather than just their product. By using short documentaries as a storytelling alternative to traditional commercials, Breakwater connects brands’ consumers with characters and stories, rather than solely the product for sale.

Breakwater Studios’s branded documentary approach eliminates the traditional agency middle-man. This strategy incentivizes brand adoption by providing both direct access to the filmmaker and the products; further, it has proven to be an impactful and cost-effective alternative to advertising. Breakwater crusades for the return of original and handmade filmmaking and the resurrection of the creative studio campus pioneered in Hollywood in the 1930s.

This series is no exception to Breakwater Studios’s award-winning filmmaking approach, and the continuation of a strong partnership with Unity forged over the past five years. Unity embedded a creative producer with the Breakwater crew for a month-long international shoot to capture this series. The team traveled to San Francisco and New York City before heading to Gothenburg, Sweden. They continued on to London before ending back in California, shooting in Redwood City and Los Angeles. As will be discussed below, post-production was conducted remotely by the Breakwater team to deliver the film despite the Covid-19 pandemic.

Breakwater Studios delivered the Unity IPO Creator Series in May of 2020, and it was launched publicly on Unity’s website and social media outlets in September 2020. The company went public on September 17, 2020. According to reporting by MarketWatch, Unity’s debut brought in $1.3 billion at a valuation of $13.7 billion. Unity continues to perform well in the marketplace today; Unity shares debuted at a price of $63.45 and are valued at $148.89 at the time of this writing. The films can be found on Unity’s website and social media channels, with exposure to the company’s 915 thousand YouTube subscribers and 416 thousand Twitter followers.

This series was finished as the Covid-19 Pandemic took over our world. The final leg of production, planned for Bellevue, Washington in mid-March 2020, was canceled due to safety concerns. Post-production had to be shifted from in-house at Breakwater to a remote workflow between multiple editors, a director, colorist, sound designer, composer, and other support staff. Breakwater virtually convened its employees and freelancers to devise a way to shoot the final interview safely. They collectively created a Self-Isolated Protocol (SIP) to enable a single cinematographer to capture the final shoot, with extensive safety procedures and virtual support and direction from the team in Los Angeles. Although designed to fulfill its commitment to Unity, Breakwater continued to utilize SIP to film additional branded and original documentaries throughout 2020. This innovation guarantees the survival of branded films despite the challenges of Covid-19.