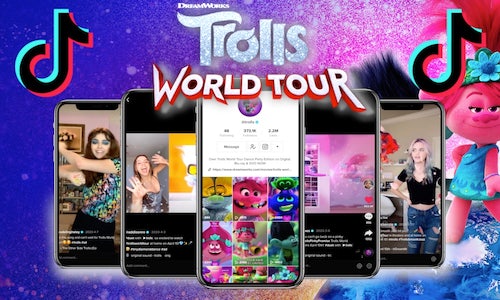 As the pandemic began to spread and force movie theaters everywhere to shut down, Universal and DreamWorks Animation’s Trolls World Tour made movie history as the first feature ever to be released on premium video-on-demand (PVOD) right out of the gate. This bold move completely upended the traditional windowing model and set the industry on a record-breaking tear with 100 million in sales in less than 3 weeks, making Trolls World Tour the most important movie of 2020.

QYOU Media’s goal was clear: drive viewership and excitement for a family film release exclusively on PVOD. With the stakes high, QYOU Media launched a multi-phase video marketing campaign on TikTok to drive mass awareness for the franchise’s sequel film and foster participation and engagement from the studio’s target audience.

To pull off a marketing campaign of this importance, QYOU’s strategy included multiple creative pulses of influencer activations, with content curation and channel development to grow the @Trolls TikTok channel (the same one that QYOU launched with DreamWorks in 2016). Key to its success was delivering a campaign at scale with 100% organic views (no paid ads) driven by authentic influencer posts and exciting channel content.

Utilizing the key characters, music, and scenes from Trolls World Tour, QYOU turned the @Trolls TikTok channel into a powerful campaign hub, providing a homebase for the community to further engage with the popular, star-studded, and musically addictive franchise. And with the activation of popular influencers over four main creative pulses, QYOU Media helped Trolls World Tour make a huge splash on TikTok, generating a ton of excitement, engagement, and anticipation for the PVOD release.

QYOU’s influencer activations were focused into four creative pulses to maximize reach and engagement and to align with the franchise’s key marketing timeline. These pulses launched from the @Trolls TikTok channel and included #TrollsPinkyPromise, #TrollsSmoothJazz, #TinyDiamondDance, and #OtherSide. QYOU Media tapped into trending TikTok formats and leading content creators to link the brand’s target of family and kids communities back to engage further with Trolls World Tour sanctioned content.

QYOU curated and formatted a key scene in the film to create the “Pinky Promise” Interactive Duet. #TrollsPinkyPromise was a viral hit as the community jumped in to make and share their own virtual pinky promises with Poppy!

QYOU reimagined a fun scene from the film, using dialogue, music, and the unique use of a GIPHY sticker to bring a Troll’s character to life as actors in the Influencer and community posts.

QYOU utilized the cute and popular “Tiny Diamond” character for a TikTok dance duet challenge. This pulse included a DreamWorks Animation-developed custom short-form video post of the “Tiny Diamond Dance”. QYOU partnered with some of the platform’s most popular creators, including Addison Rae, to dance with Tiny Diamond!

QYOU partnered with top influencers to develop an original dance trend / challenge to drive association between the Trolls IP and Justin Timberlake’s hit single, “The Other Side”, a new song he created for the movie.

QYOU took the helm of the official @Trolls TikTok channel and updated it into a powerful campaign hub and provided a homebase for the community to further engage with the franchise. The channel doubled in size to 315K+ subscribers and delivered an incremental 4.6M views, 834K engagements, and an impressive engagement rate of almost 18%.

In addition to the 31 curated and editorialized posts on the @Trolls channel, four creative pulses powered the campaign by maximizing reach and engagement with influencer activations. The campaign featured 23 Influencer posts with a 244M total subscriber reach featuring a mix of content creators, including leading TikTok star, Addison Rae (@addisonre). The influencer and channel posts activated the TikTok community, earning over 10M engagements, and an engagement rate of 15%+.

The Trolls World Tour campaign on TikTok delivered BIG and delivered at the (home) box office! The animated movie broke records as the first feature ever to go directly to PVOD and generated approximately $100M in its first few weeks of release. The TikTok campaign played a big part in driving that success through its viral, multi-phased social media campaigns, creating a steady drumbeat of contagiously engaging content that gained momentum as the campaign rollout continued. 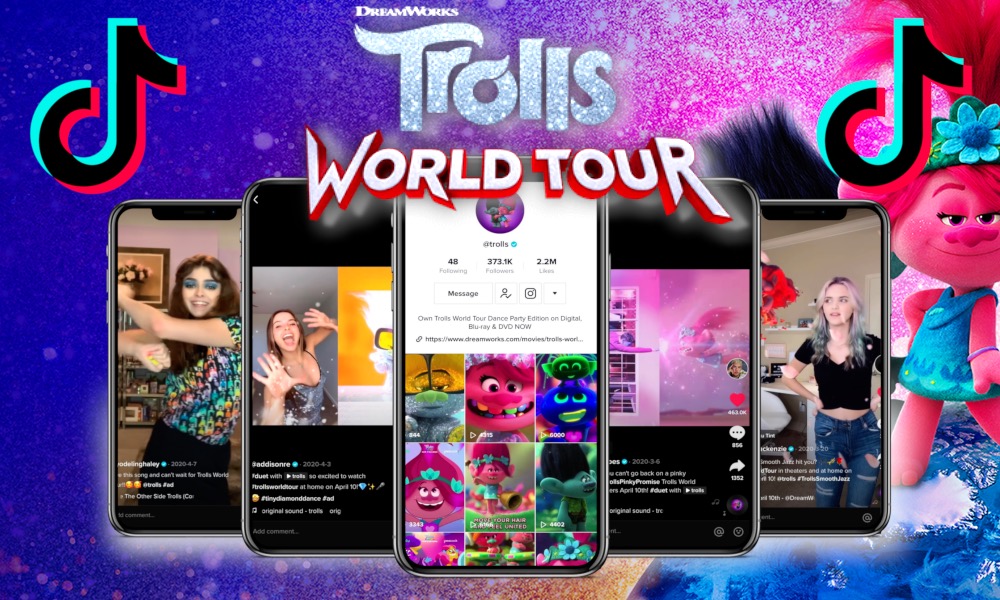