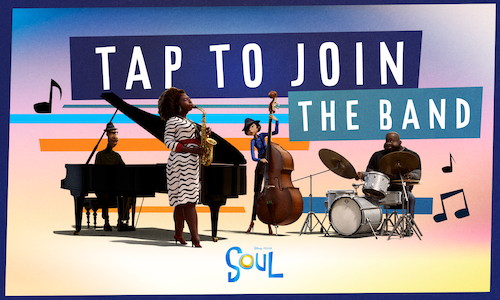 As part of our work with Walt Disney Studios’ international team, we created a suite of social assets for Soul, with the aim of each piece being imaginative and engaging, yet easily localisable for rollout in different territories around the world. One of our favourite pieces from the toolkit was our “Tap to Join the Band” Instagram Story, which introduced fans to the film’s themes of jazz and creativity, as well as raising awareness for the December 2020 release on Disney+.

With music, and particularly jazz, being so integral within Soul, our aim was to tap into this theme with an interactive social activation that would match the tone of the film. Instagram Stories was a key platform that Disney wanted to involve within their campaign and we came up with this idea that built on the functionality and ease of upload to the social platform.

Setting the objective to immerse the fans in the music and encourage interaction with the asset, our team set about creating an experience whereby audiences would be invited to “Join the Band” and tap to add each new band member and instrument to the track. We wanted to push the boundaries of our creative and build something that seamlessly intertwined precise music editing, graphics and timeless scenes from the film.

We focused on gamification of the content to encourage engagement and really immerse audiences, making them feel as though they are part of the jam session. We made it fun and accessible by creating clear, signposted graphics which explicitly conveyed what the user should do and when.

As users viewed the story, they were asked to tap to add the drums, followed by the piano and lastly, the double bass. As each new instrument was introduced, so too was a new character, as drummer Curley, pianist Joe, and bassist Miho were each highlighted in a new story panel.

The style of the piece was designed to be a nod to mid-century modern design; the angular, expressive shapes, the bright colours and playful style. We wanted to really highlight and play on the genuine, deep-rooted love for jazz as shown by the main character, Joe, which we felt that this movement of design does perfectly. However, knowing that the film was targeted at a young, modern audience, we felt it crucial to modernise the style, whilst making sure that the mood and tone of the era was at its core. To do this we looked at three separate elements.

Colour: We created a bold, rich colour palette of blues and yellows that suggests a nighttime, underground vibe. This helped to give the piece a jazzy feel whilst modernising the aesthetic and staying within the ‘Soul’ world.

Shapes: We wanted the shapes to have personality without being characters, or taking away from the main footage. We designed them to be minimalist and clean, and animated them in a rhythmic, playful way so that they felt as though they added an extra layer of rhythm to the band, almost like a drumstick. The ripple effect on ‘Tap’ helps give a more organic feel.

Typeface: We chose a typeface that had a quirky, fun, playful feel whilst still being legible and could be used for all typographic hierarchies.

To truly create the atmosphere of a jazz jam session, marrying our bold graphics with precise music editing was key. Our team went through the feature film and made our own music edit from audio splits using Audio Network, which would allow us to create the individual segments bringing each musician in one at a time.  The graphics were then carefully tailored to the timing of the music and the beat of the ‘tap’ to ensure a smooth transition between frames, being sure to leave a minor margin to account for some users potentially tapping ever so slightly off beat.

To raise awareness that Soul was available on Disney+, our design featured brand logos and release messaging in the form of “Streaming 25 December”, along with a “Start Your Free Trial” call to action on the endcard.

Our Tap to Join the Band Instagram Story was rolled out globally across Disney-owned instagram channels. The simple yet effective design made the asset easy to localise and meant it was featured in several territories including France, Italy, Indonesia, Singapore and Brazil, with a potential reach of over 1.5 million.

We were thrilled with how the piece encapsulated the mood of playing in a jazz quartet and represented the themes of the film in a creative and immersive way.

The asset successfully encouraged engagement and highlighted release messaging to spread awareness of the film, which became one of the most-watched movies or TV shows over the week of Christmas 2020.

Video for Pixar’s Soul - "Tap To Join The Band" 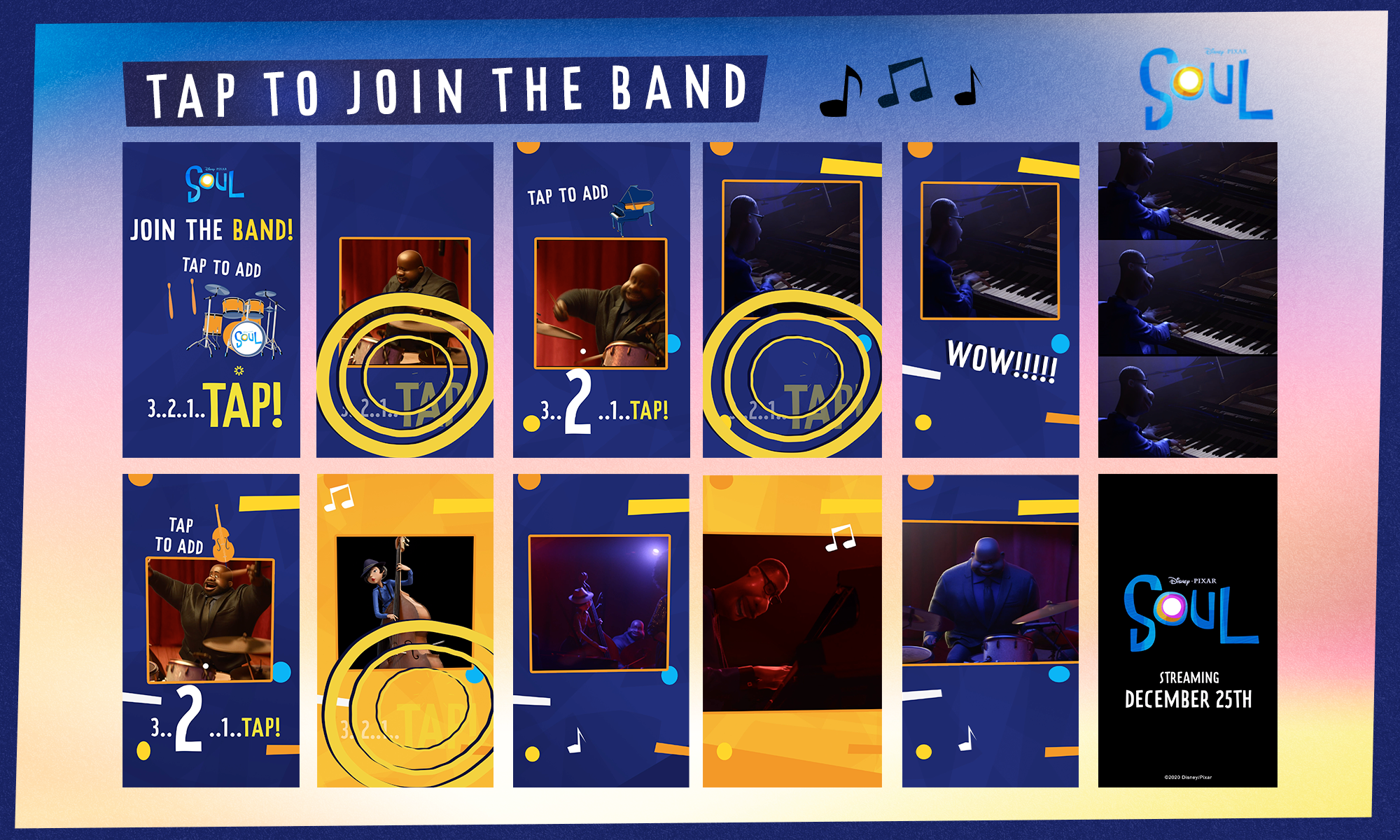 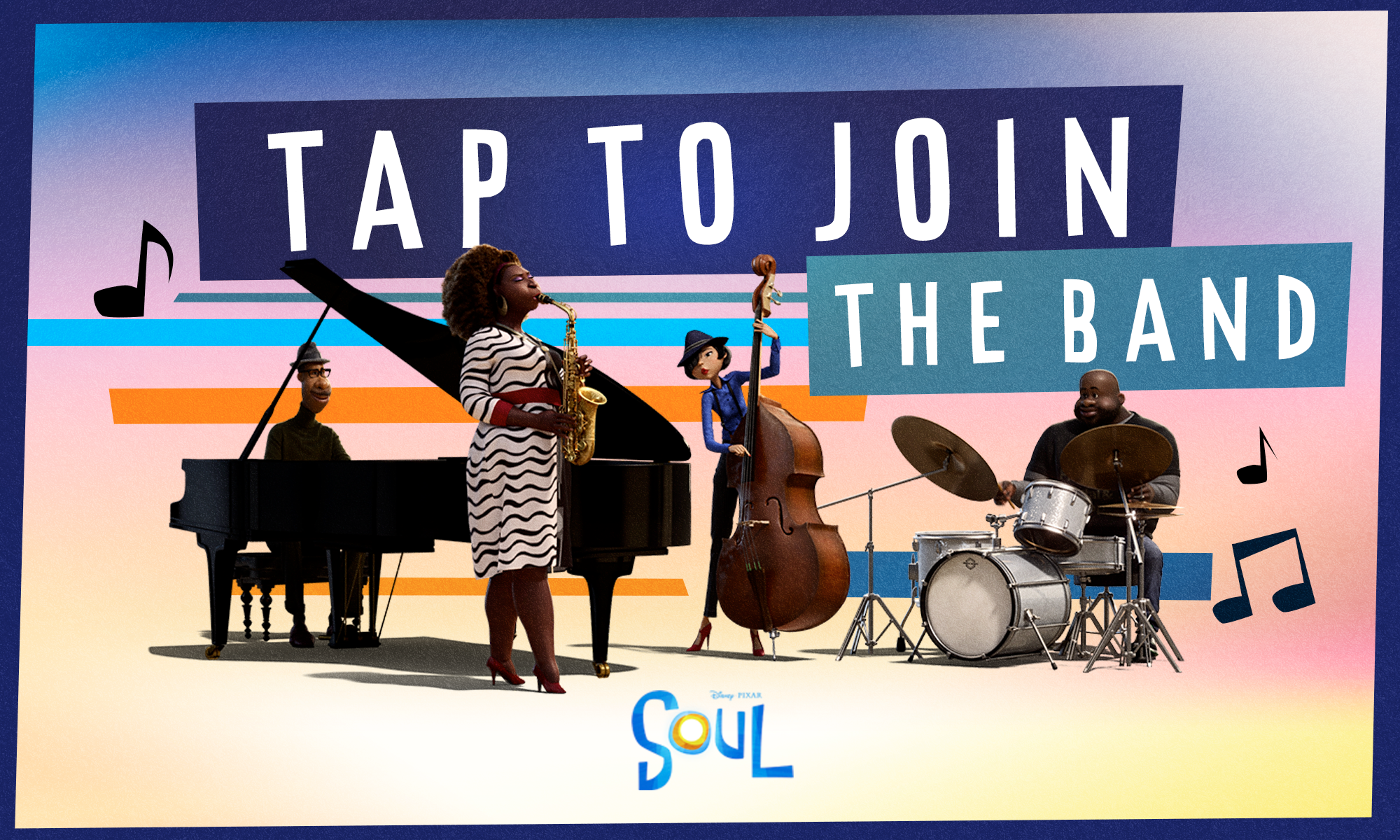