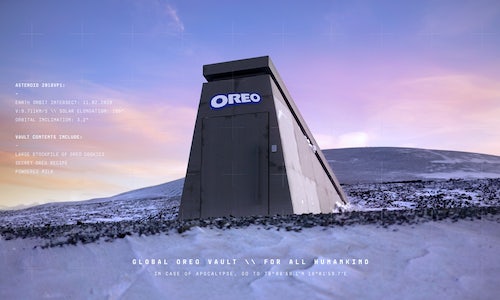 Alerted by a concerned fan on Twitter, OREO was on a mission to save the OREO cookie from the impact of Asteroid 2018VP1 by building the OREO Global Vault in the permafrost region-Svalbard, Norway.

To bring this activation to life, we had to work against actual space and time. Agencies, directors, producers, & editors prioritized the production of the documentary, social short videos, physical vault build, social communication plan, media outreach plan, and influencer assets in record time: from idea to reality in only 35 days.

For this idea to work at its best, it needed to feel real for viewers and very real for the brand and architect tasked with saving the OREO cookies. Maintaining an authentic and urgent tone required elevating the storytelling - showcased by the film cast. A crew of both professional actors and Mondelez employees gave the film a very authentic feel. They dropped everything to save OREO cookies. The Global OREO Vault is real, even if only in the hearts of OREO fans and followers.

On top of everything that happened in 2020, NASA reported that Asteroid 2018VP1 was headed toward Earth’s atmosphere on November 2. “I wonder who will save the Oreos,” tweeted a concerned citizen.

Although there was virtually no chance (0.41% to be exact) of the asteroid threatening our beloved cookie when it passed by, OREO wasn’t willing to risk a future without the world’s favorite cookie.

It was our civic duty to take the potential threat seriously, and to work day and night to protect the future of OREO Cookies for our civilization. But how? By building an asteroid-proof vault in Svalbard, Norway, filling it with a stockpile of OREO Cookies and documenting the entire journey along the way.

We overhauled OREO’s Instagram and Twitter for five days, masterfully dropping playful teasers about our plan to save the OREO Cookies. Upon sharing that OREO had a plan in the works, fans responded with feelings of relief and gratitude that followed our very serious tone, and anticipation for what was to come.

To further drive campaign engagement, we gave fans a peek into the vault which held special OREO packs wrapped in protective casing, accompanied with powdered milk (just add snow!). Fans went *wild* for them, asking how they could get their hands on a pack and requesting OREO make them for real.

This cross-agency, integrated campaign jumps on a worldly event by playfully creating social buzz and taking swift and measured action to protect OREO cookies at any length, all while inviting fans and other brands to get on the fun. OREO is a brand that’s constantly finding new ways to tap into the cultural zeitgeist. And while culture may change, the fact that OREO is loved across the country does not. Our social approach was to playfully insert the love for OREO into a new and relevant context (the impending asteroid) and drive social buzz among fans throughout the journey. We took this one step further by creating elements that captured consumer attention, like customized packaging for the stockpile of OREOs.

We overhauled OREO’s Instagram and Twitter, masterfully dropping playful teasers about our plan to save the OREO Cookies. Once we finally revealed the Global OREO Vault, a burst of activity across OREO’s social channels drove video views and sparked buzz. We created more than 40 pieces of multi-platform social content which   resulted in nearly 4MM organic impressions, 324K+ video views and 178K+ engagements in only five days. On average, it takes OREO nearly two weeks to drive on-par impressions and real-time community engagement to pique fan interest, drive documentary views, and spark buzz. Our Instagram post that showed the special OREO packs wrapped in protective casing drove 72% more engagements than OREO’s benchmark. Sentiment was overwhelmingly positive, and everyone played along with our serious tone. Many praised OREO for such a heroic act and celebrated how “epic” the activation and custom OREO Vault packs were. Some fans even commented on the film’s beautiful cinematography and our engaging social strategy. Iconic brands jumped in on the fun, including Dunkaroos, Coca Cola, Diet Coke, Burger King, Krispy Kreme, Dunkin Donuts, and more.

We also brought The Vault to life through earned media placement. We treated media like consumers to maximize intrigue and impact by teasing a cryptic message days before launch, saving the big reveal for the release date, playing up the ‘seriousness of the situation,’ and sparking social shares with a suped-up mailer to our closest media and influencer VIPs.

These efforts resulted in excitement and earned coverage for our mission across online, social and broadcast media, spanning tech, lifestyle, food, and news, outlets - during an incredibly loud news week, including election coverage and the SCOTUS confirmation). All in all, we earned 415 placements, 99% of which featured 2+ key messages of the campaign, and nearly 75% of online stories embedded the vault film. Overall, we saw 78,443,127 impressions UVPD from outlets including Ad Age, Adweek, Fox Business, CNET, Food & Wine, and more.

Video for The Oreo Doomsday Vault 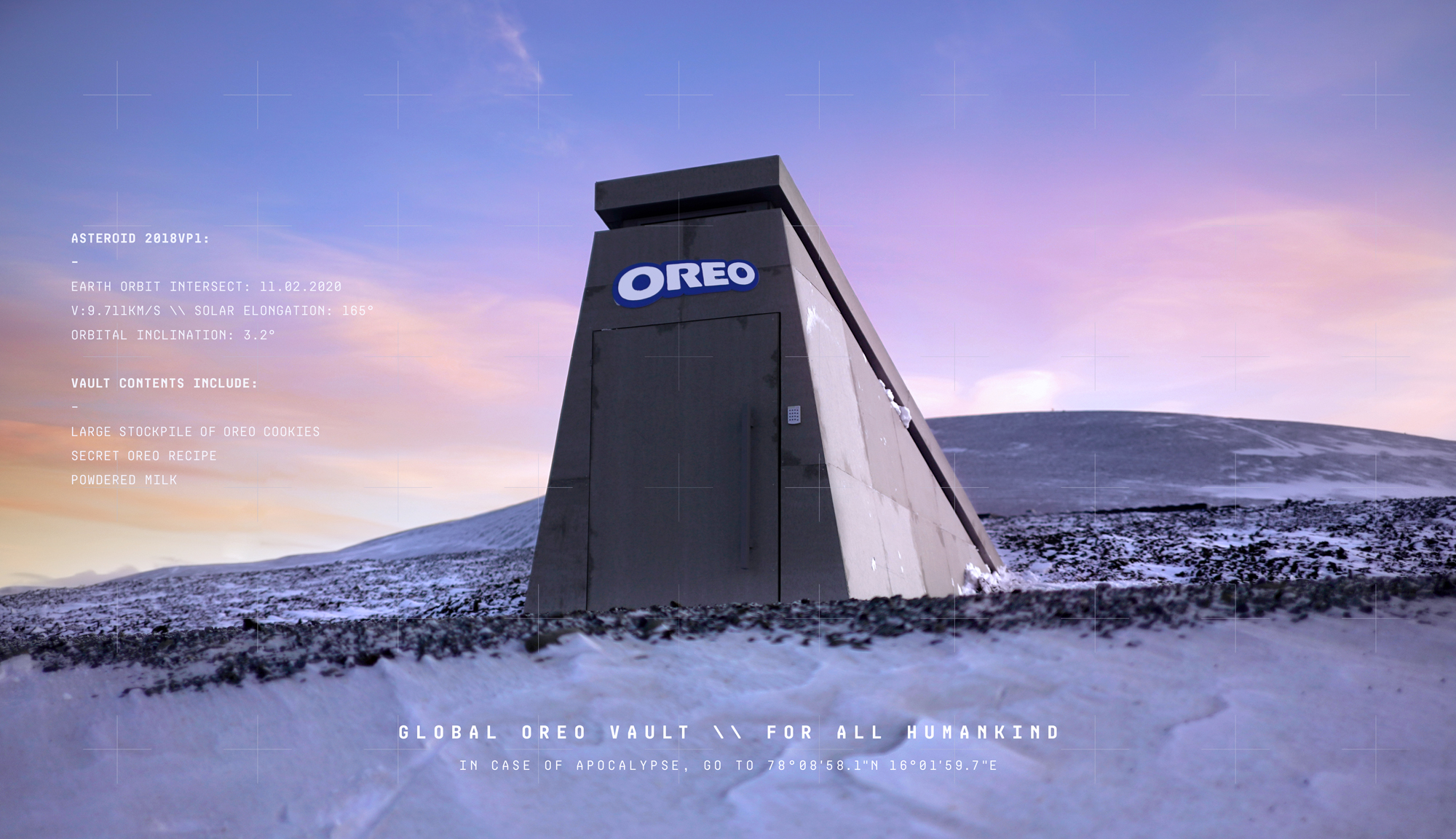 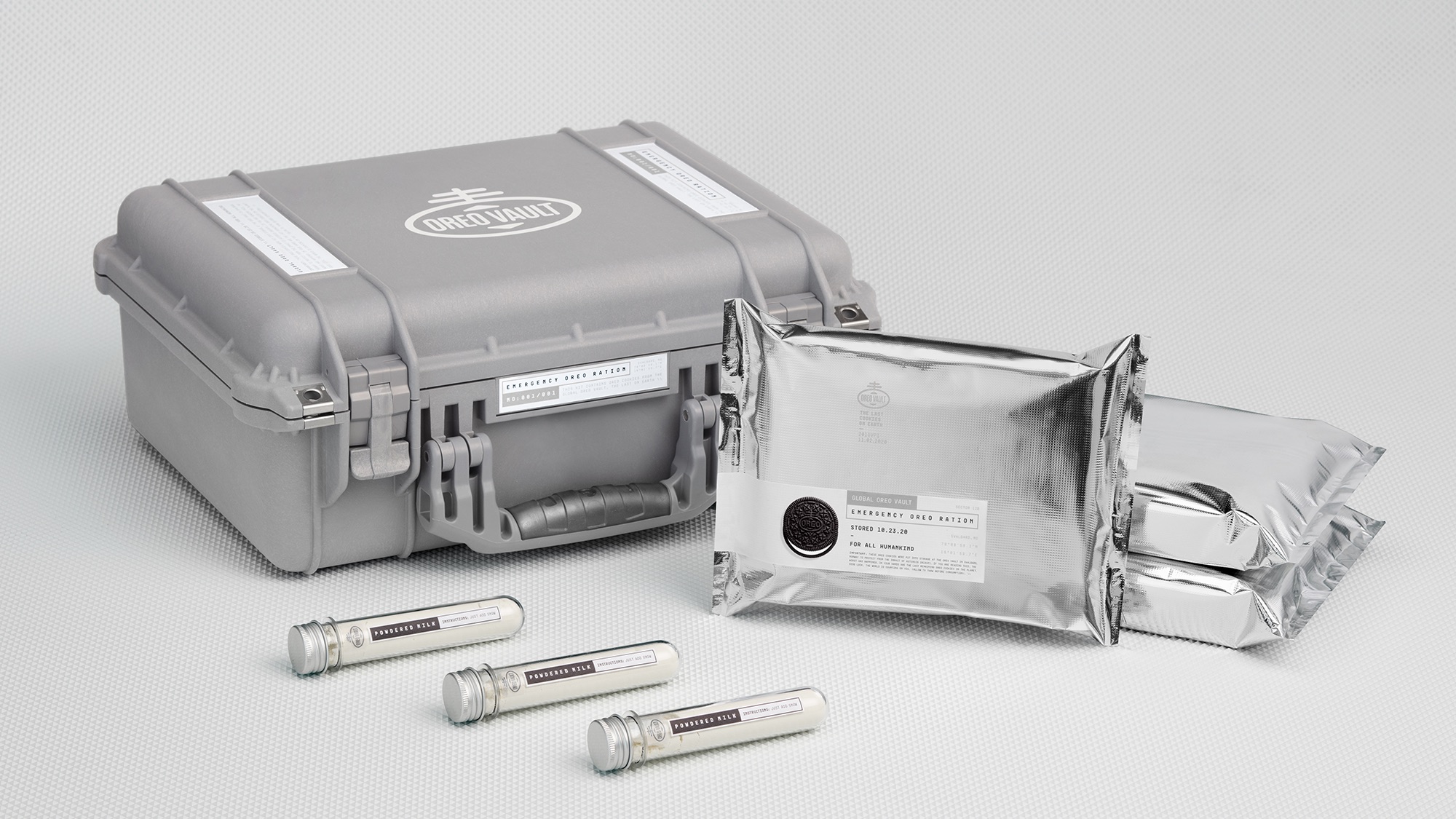 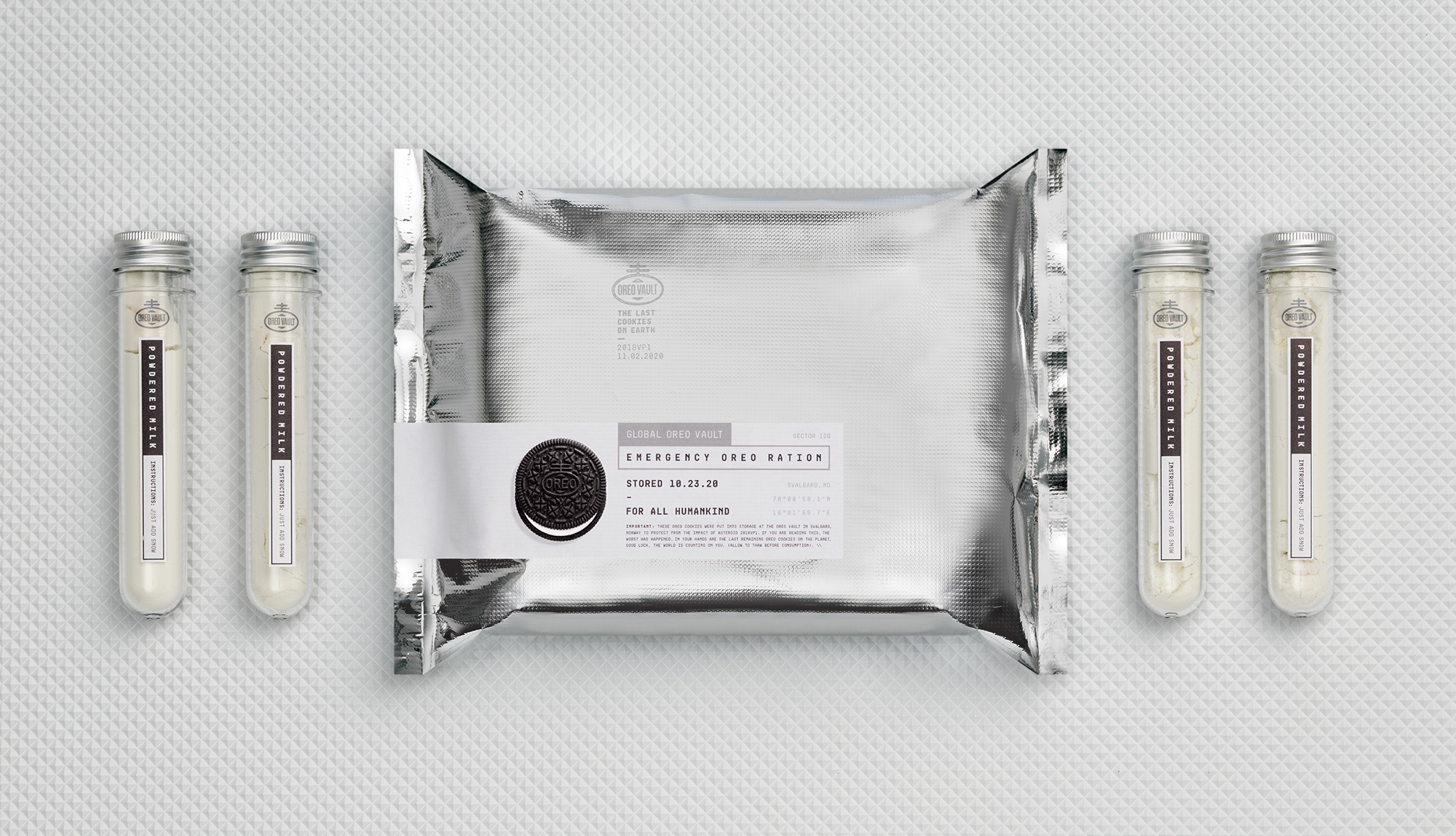 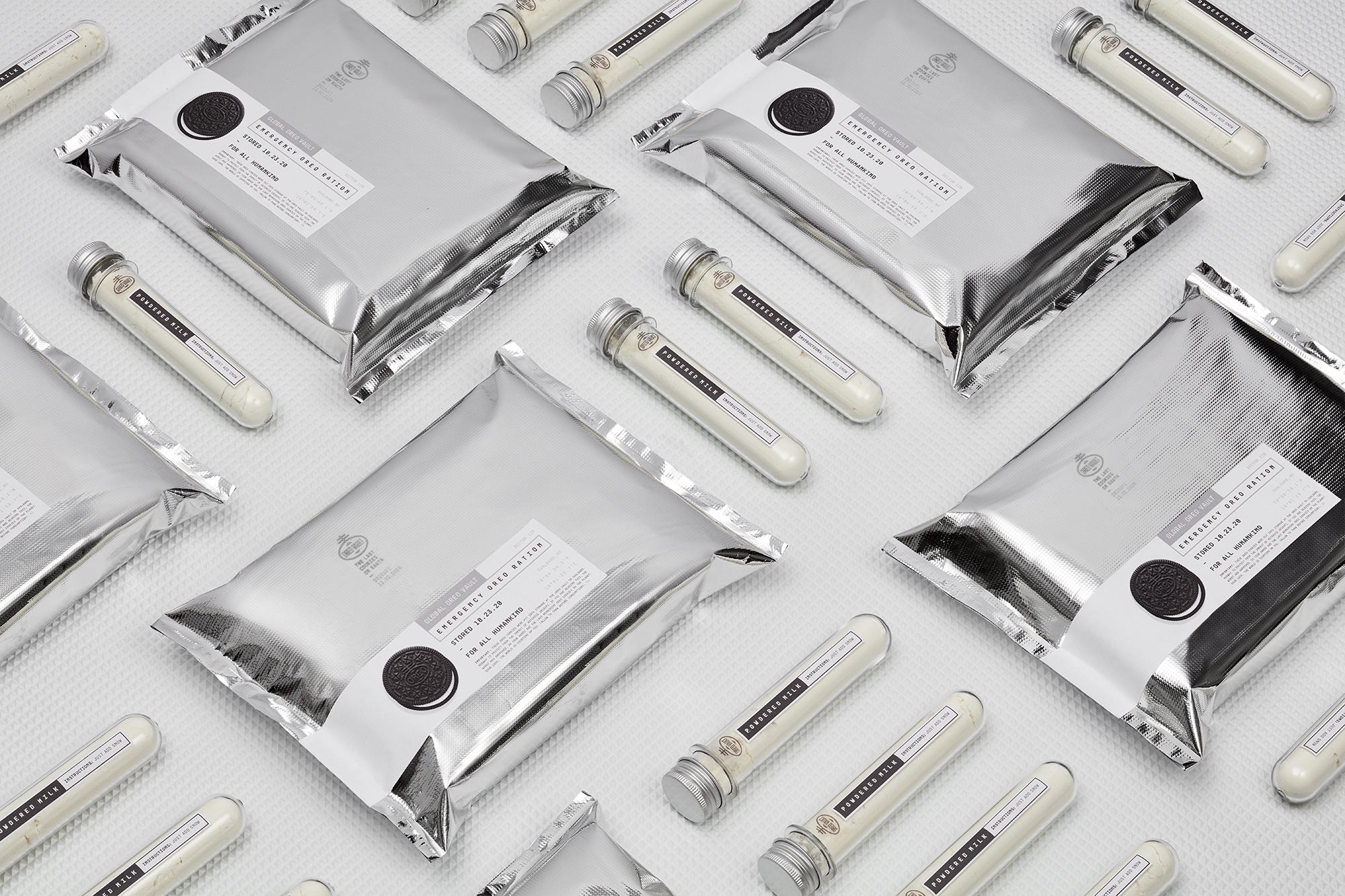 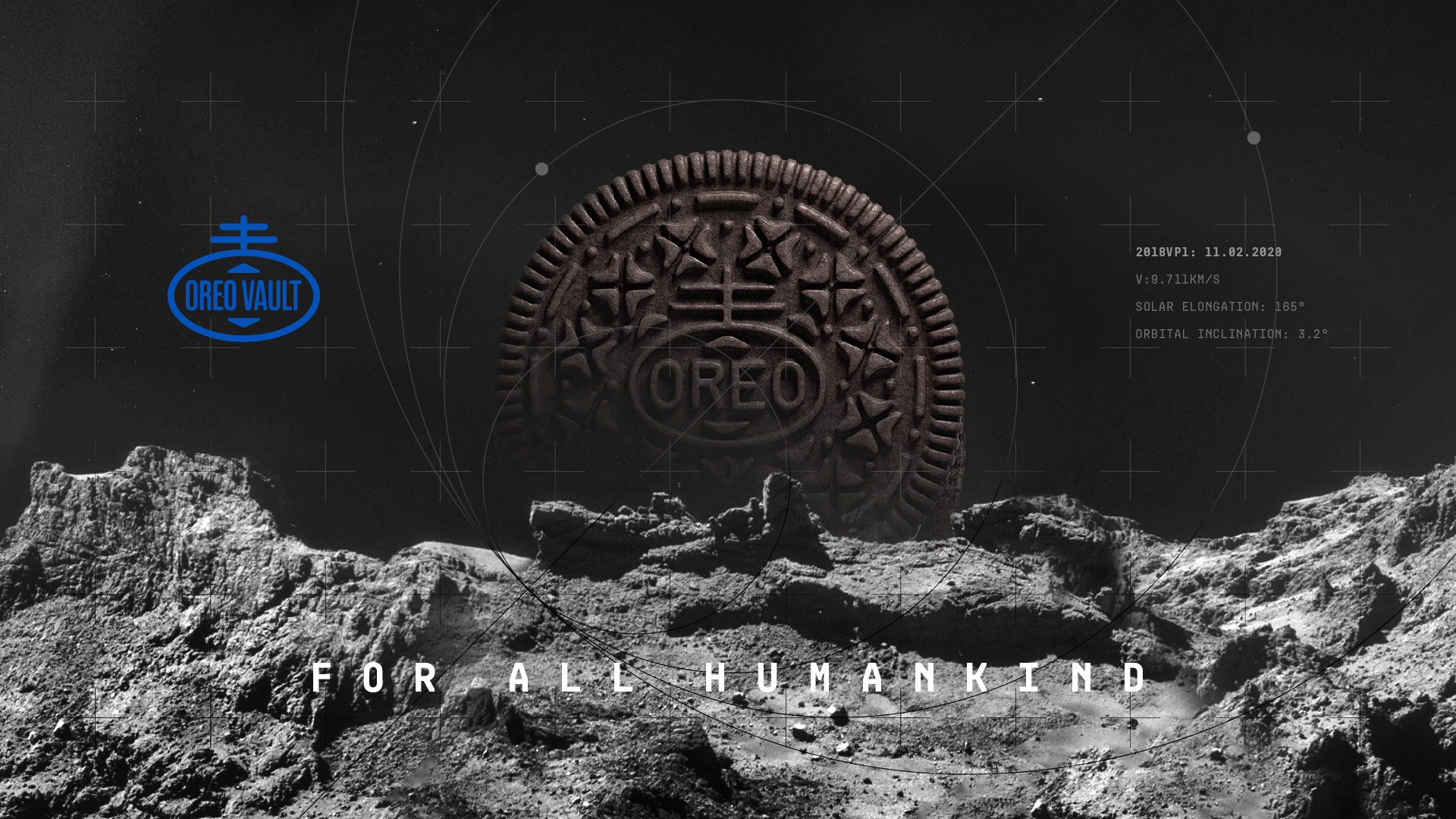