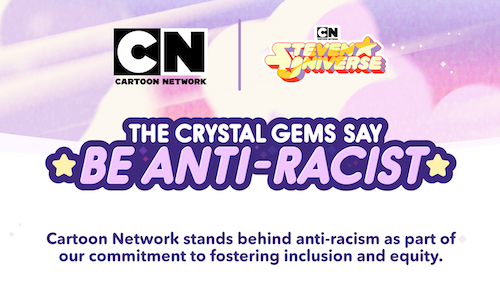 The Crystal Gems Say Be Anti-Racist

The past years have witnessed steadily increasing hostility, trolling/bullying, anti-Black violence, and widespread social strife. 2020 and the pandemic accelerated all of this, as a highly visible wave of anti-Black violence brought increased attention to enduring issues of race and racism. Cartoon Network knows that this racial hostility impacts kids and families on a daily basis, in a multitude of ways. For more than twenty years, Cartoon Network has supported our audience – advocating for diversity, LBGTQIA+ issues, anti-bullying, and anti-racism. We recognize that systemic racism is an enduring and deeply rooted social ill, requiring long-term efforts. In the meantime, we saw an immediate opportunity for support that is authentically aligned with our greatest strengths: storytelling and amplification.

Most viewers fall into one of two groups: People who don’t know they need to learn about anti-racism, and people who think they already know everything about anti-racism (but may not). Cartoons can be a powerful medium to make these conversations accessible, understandable, and emotionally engaging.  Steven Universe created a positive anti-racist campaign to help children and families talk about and understand the importance and effects of racism. The goal is to disrupt false narratives around racism, like how it’s harmful to say “I don’t see color”. Our messages primarily focus on supporting Black Children, Black families, and the Black community.  Secondarily, we wanted these messages to also educate White and non-Black kids and families on how to best support the Black Community and take specific actions.

The Crystal Gems Say Be Anti-Racist campaign is grounded in a big idea – communicating a paradigm shift that can change thinking and start informed conversations. The campaign’s messages are short, specific, and not tied to any topical incident, in order to focus on more enduring truths. They went beyond superficial bromides like “don’t be racist”, instead focusing on specific actions to be anti-racist. When kids understand racism as a history of policies, they are better able to cope with expressions of this history like discrimination. The goal is to help kids understand the system of racism and social issues surrounding it, so they can interrupt it.

Steven Universe is the ideal show to share these messages because of its award-winning storytelling, diverse characters, and its relevant themes of acceptance, positivity, and empathy as a special power. Because they are both naïve about human life and more objective, the Crystal Gems serve as teaching tools -- their thoughts might echo kids’ own questions.  The creative team was guided by experts in the fields of child psychology and race in effective anti-racism messages throughout the development process – from initial brainstorming, through multiple rounds of feedback. The team developed four key themes, each one anchored in addressing an area of racism denial versus reality. It’s essential these stories provide truly supportive action and not come across as performative gestures.

In each story, the Gems start with a misunderstood concept (conventional wisdom), and in the process of breaking that concept down they uncover the real truths. The characters breach the fourth wall to “flip the script” and challenge common narratives and provide an anti-racist message. The act of breaking out from the set makes clear to viewers that the Gems were discussing things that happen in the real world – not their fantasy world. The Gems have an advantage because they live much longer than humans; they can provide a macro-level view that humans can’t see. The Gems’ understanding of history means they can more clearly see the policies, systems, and movements at play. The PSAs use accessible language to demystify complicated ideas: Tell the Whole Story, for example, unpacks a history of racist policies to help define a complex term like “systemic racism”.

The PSA messages are being shared globally across Cartoon Network’s IG, FB, TW, and YT channels and on the CrystalGemsSpeakUp.com dedicated microsite. The microsite serves as a destination for anti-racist tools and resources, provided by social justice organizations, for kids and families.

Steven Universe fans are embracing and amplifying these messages beyond the core community.

Within the first 24 hours of the first PSA, Don’t Deny It, Defy It, gained over 4.2M+ organic impressions, 400k+ organic engagements and 1.6M+ organic video views across social platforms.

The second PSA in the series, Tell The Whole Story, gained over 9.5M+ organic impressions, 477K+ organic engagements, and 2.2M+ organic video views in the first 24 hours. Rex Chapman, a well-known advocate for social justice on Twitter, retweeted a video of the second PSA (sourced from Dwan’s account) and it immediately spiked visibility. The video instantly started trending and went viral across social, receiving kudos from various celebs/influencers (ie: Mark Ruffalo, Trevor Noah, Kenneth Cole, and more), and generated phenomenal press coverage. The Crystal Gems Say Be Anti-Racist campaign has been recognized and amplified by numerous media outlets. The first two videos have exceeded goals and expectations. There is more to come with the launch of the remaining messages.

“Cartoon Network absolutely doesn’t have to do this. There’s nothing forcing them to. It’s not Black history month and there’s no national outrage that they’re capitalizing on. They do it cause it matters. THIS is the right way to tackle anti-racism.

Video for The Crystal Gems Say Be Anti-Racist 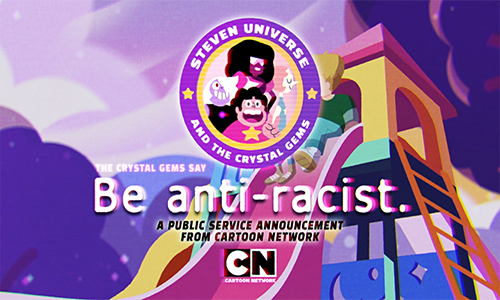 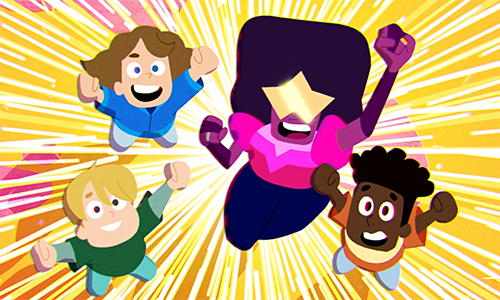 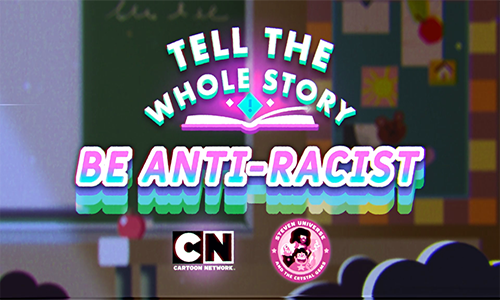 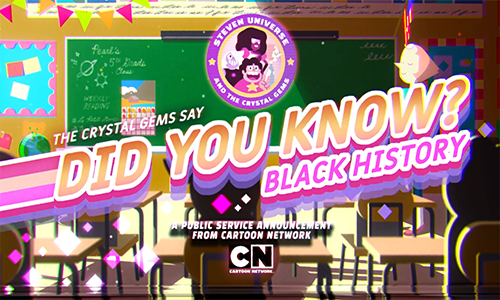