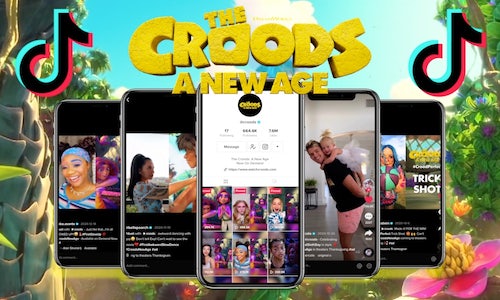 Universal Pictures and DreamWorks Animation released The Croods: A New Age in theaters on Thanksgiving and at home via premium video-on-demand on Dec 18th — bringing joy to millions of families during the holiday season. Since the initial release of the original The Croods in 2013, TikTok has emerged as a power-house platform (with over 100M MAUs) for reaching youth and family audiences, making it a make-or-break marketing channel for this release.

Universal Pictures tapped longtime partner QYOU Media to pull off a multi-phased influencer and video marketing campaign on TikTok like never before! QYOU wooed, delighted and excited the franchise’s existing fanbase, while also drawing in new fans to the latest chapter in The Croods beloved animated franchise.

In the campaign window stretching from the initial trailer launch to theatrical and at-home PVOD releases, QYOU’s objectives were clear:

Together, QYOU Media, Universal Pictures, and DreamWorks Animation built the @croods TikTok channel as a homebase for the community to dive deeper into film content and provide a launching pad for Influencer activations. Key to its success was delivering a campaign at scale with 100% organic views (no paid ads) driven by authentic influencer posts and exciting channel content.

The strategy involved DreamWorks Animation-developed custom short-form video posts designed specifically and exclusively for TikTok. Leading influencers used these custom pieces to create content for their own channels, featuring organic interactions with key Croods characters and scenes. Influencers delighted and inspired their fans to engage with the Croods IP and show off their own renditions of the creative format (UGC), using assets that all pointed back to the @croods TikTok channel.

Over the four month campaign, influencer activations were focused into five creative pulses to maximize reach and engagement and to align with the franchise’s key marketing mandates. These pulses showcased a variety of Croods-inspired “World’s Firsts” (a nod to "The Croodaceous" aka prehistoric age) with a modern twist that resonated with the TikTok community. Influencers each put their own spin on the “World’s First” Trick Shot, Accessory, Awkward Slow Dance, Glow-Up, and Warrior Tribe. With an array of The Croods: A New Age content, themes, sounds, and hashtags, influencers added their authentic voice to the fun to the delight of their fans.

QYOU Media’s creative team successfully married each creative pulse (featuring The Croods: A New Age scenes, themes, and characters) with trending formats on TikTok (such as interactive duets, glow-ups, transformations, etc) enabling selected influencers and the community to create impactful content authentic to the platform. QYOU’s influencer selection strategy was to identify brand-aligned creators suited for each creative pulse to ensure that these adapted formats were authentic to what their fans expect from them. Multi-cultural creators were effective as they aligned with the diverse fanbase of the Croods (i.e., Aba Asante drove over 3.4M campaign views).

As an example, QYOU partnered with TikTok sensation Bella Poarch, known widely for the most liked TikTok post ever, to create a “First Awkward Slow Dance” duet post, set against a custom animation, featuring the character of “Guy,” voiced by Ryan Reynolds. This post alone delivered more than 40M organic views!

QYOU developed and grew the @croods channel from 0 to 670K subscribers, making it the most followed channel for a family movie on TikTok. Ever. This effort included 45 posts on the channel, earning over 70M organic views and 7.7M engagements

Participating Influencers had a reach of 206M fans (in aggregate of posts). These creators delivered 17 posts that earned 70M views and 9.2M engagements on their own channels. And they even encouraged their fans to join in on the fun! This drove over 320M views against campaign hashtags and 31K UGC posts.

140M views is attributed to the @croods TikTok channel and the diverse roster of influencers tapped for this campaign, which included:

QYOU Media successfully brought The Croods: A New Age to life on TikTok with more than 60 posts over four months, delighting families everywhere and dominating the box office via theatrical release and topping the charts across all streaming services via PVOD during the holiday season.

Video for The Croods: A New Age Takes TikTok 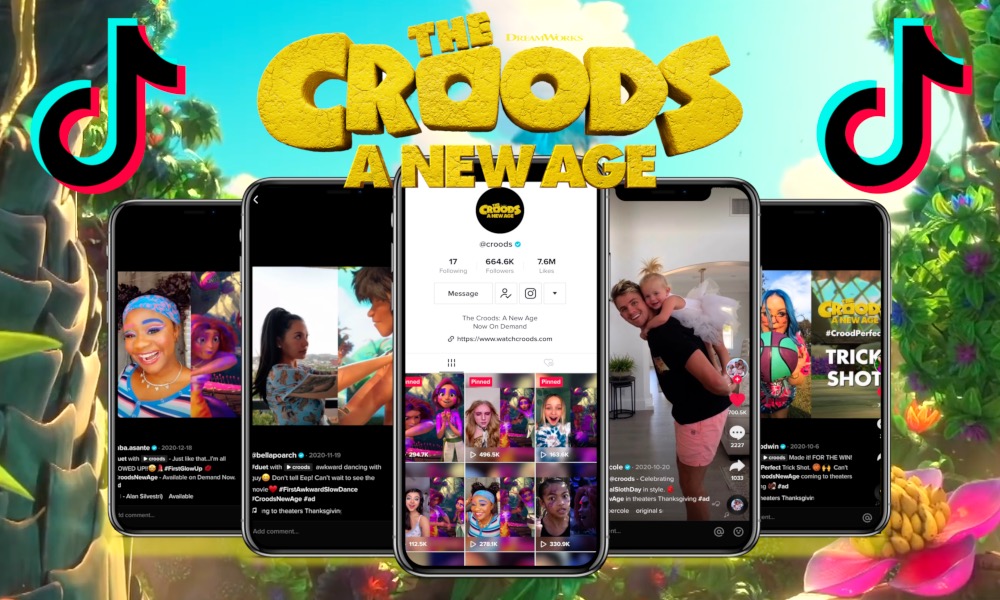