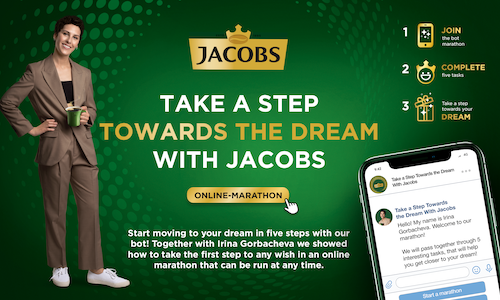 Take a Step Towards the Dream With Jacobs

The share of discounted sales of all coffee brands in Russia continued to remain very high in 2020.

Jacobs, being in the premium price index relative to the main competitor, did not follow the dramatic price reduction per kg behind the main competitor. This led to the fact that the price gap widened greatly, and we realized that we could not grow market share just by playing at the promo level.

It was clear that an ordinary image campaign would not be up for the task. It was necessary to engage the audience in a quality manner using various popular mechanics and emotional triggers.

We noticed that "marathons" are becoming more and more popular on social media in Russia. It is a social networking mechanic that brings together groups of people with common goals and a mentor who provides tasks and inspires people to move towards the goal (often using voice and video messages). Such marathons usually allow you to fulfill a specific goal such as losing weight or learning a foreign language.

So, we decided to carry out a Jacobs marathon, as it fit the brand's communication platform and allowed the brand to stand out in the category and emotionally engage the audience.

Marathons usually involve dozens or, at most, hundreds of people at a time. However, we were running a national campaign and had to ensure that thousands of people were able to complete our marathon. Therefore, it was necessary to automate the process without losing the emotional connection between the coach and each participant. We were able to achieve this thanks to a chatbot that combined a detailed and extensive dialogue system and various content formats such as video, voice messages and pictures.

Although the marathon format is very popular, it faces several barriers. The first and the main one is the price — most marathons aren’t free and they can cost several thousand rubles; the second one is trust in the coach — they aren’t always well-known and well-educated people.

Our marathon removed these barriers. Participation was free for all. As the face of the marathon, we chose Irina Gorbacheva, a self-made actress who first became famous through social media. In 2020, she starred in the TV series Chicks, in which her character inspired her friends to quit their jobs and open a fitness club. In addition, all assignments were created with assistance from professional psychologists and in such a way as to be relevant to any dream, starting from its formulation at the first stage and ending with small steps towards the dream.

The only condition for participation in the marathon was to scan the QR code on the Jacobs coffee package.

The variability of commands and responses in the bot, which communicated on behalf of the heroine, and the tasks recorded by Irina Gorbacheva in video and audio messages, helped create a sense of real communication and fully engage the audience, stimulating them to complete the marathon.

The average conversion rate for participation in the marathon was 86% from the paid social channel, which is significantly higher than the benchmarks in FMCG at 12-22% (expert assessment of the Agency) and the plan at 15%.

Video for Take a Step Towards the Dream With Jacobs 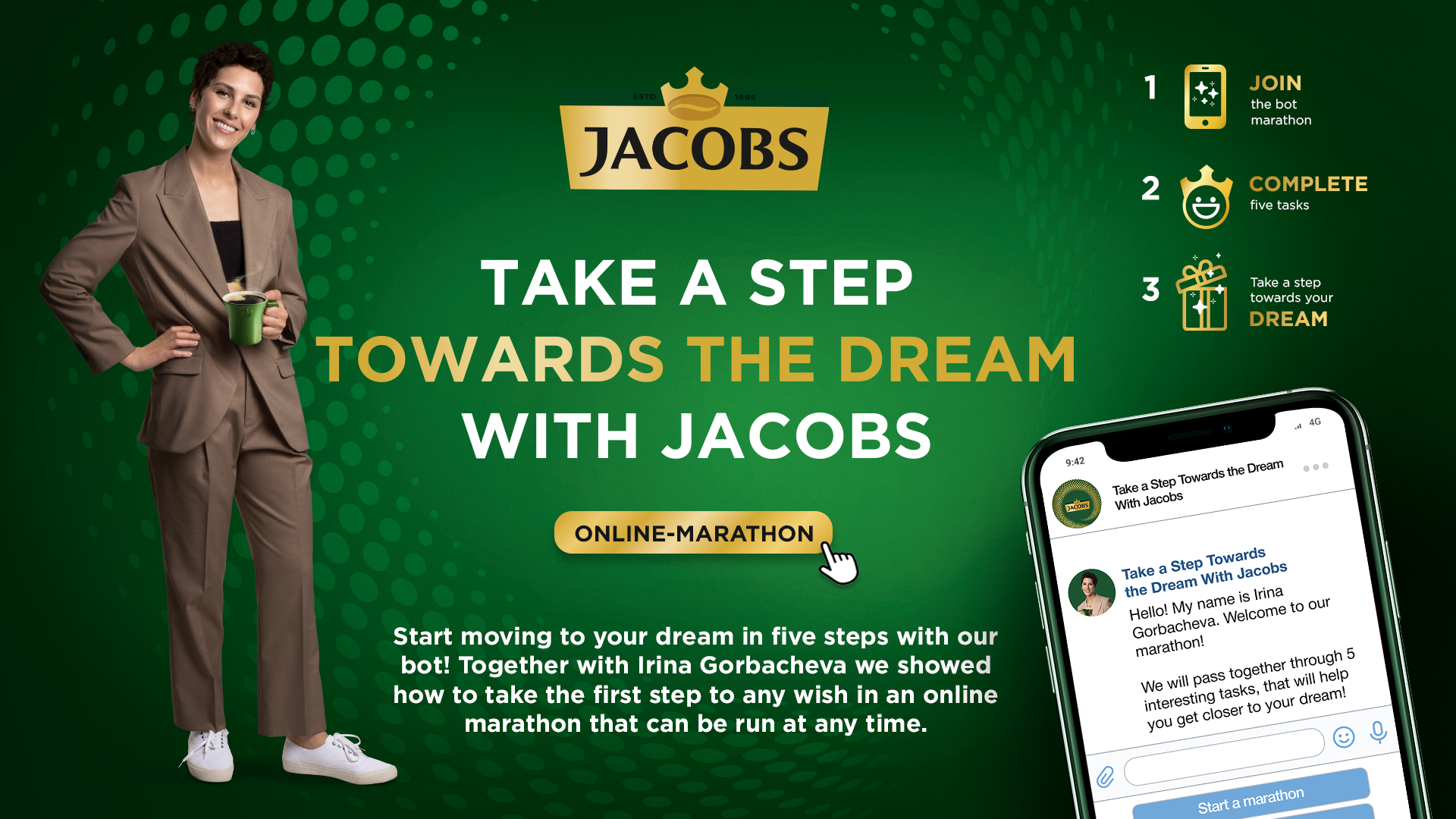