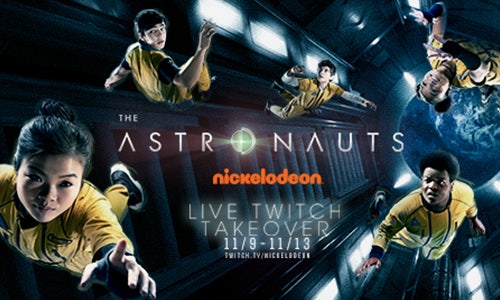 Leading into premiere weekend, The Astronauts took over Nickelodeon’s Twitch channel to drive buzz and excitement for the show’s launch. Our primary goal was to drive intent to view and conversation around the series within the gaming community. Our secondary goal was to introduce and build familiarity with the new cast, followed by a third goal of increasing Nickelodeon’s Twitch channel following.

The five-day Twitch activation sought to eventize premiere week with Nickelodeon's Twitch acting as a hub for all things Astronauts. We looked to provide a series of can’t miss content that would spark conversation with the broadest possible audience on the platform. Our multi-affinity approach led us to curate five different streams that would each seed The Astronauts to onboard potential fans and generate intent to view by running trailers, shorts, and BTS during all live streams.

The five streams amassed over 700K total views on the platform. With an additional 17k average concurrent viewers, this week of steams holds the record for the highest performing Nickelodeon Twitch streams to date (2,000-3,000% over pre-Astronauts benchmarks).

Through our partnership with Transmit.Live, they syndicated each broadcast across COPPA compliant sites garnering 4.3MM views and 1%+ CTR (124% over industry benchmark). Additionally, we supported our activation with paid Facebook & Instagram efforts that generated 3.7MM impressions and drove 8.7K clicks to the livestreams. Our Twitter support proved to be the most effective platform in driving social gaming audiences to Twitch with 746K impressions, we drove 21.8K clicks with a 1.24% CTR.

As a result of The Astronauts: Countdown to Launch Twitch Activation, the Nickelodeon Twitch channel’s daily average increase in followers was 101% higher than our previous Twitch activations.

In conclusion, this activation far surpassed our primary and secondary goals as we successfully drove excitement and viewership for the premiere of The Astronauts. 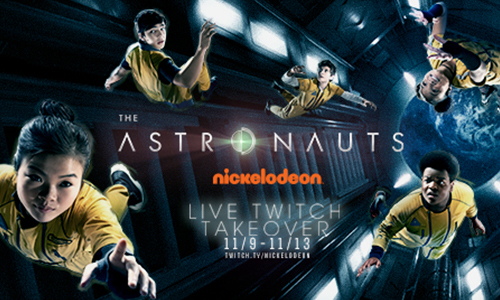