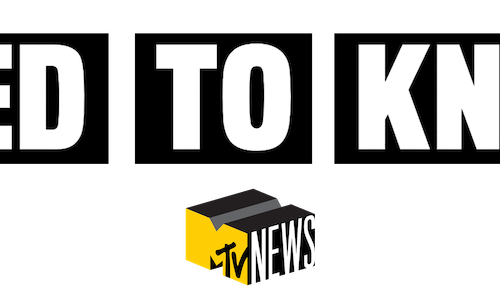 MTV News’s flagship news video franchise Need to Know launched on MTV News’s Twitter feed in December of 2018 with the goal of providing a fresh, real-time perspective on the issues that matter most to Gen Z and millennials. Originally tasked with producing 10 new episodes per week, the show’s primary focus was on music, entertainment, and youth culture. Each week, we hosted a live panel show unpacking the latest news and trends from entertainment and social media. This rigorous output was punctuated by one-on-one interviews with actors, musicians, and activists who were integral to the cultural zeitgeist, as well as live recaps that brought the perfect mix of perspective, expertise, and humor to their analysis of the Academy Awards, the Grammys, the Golden Globes, and of course, the MTV Video Music Awards. Now, the framework Need to Know put into motion two years ago has become a force in the digital space, leveraging its platform and engaged audience to analyze some of the biggest social and political moments of our time.

Award-winning journalists Dometi Pongo and Yoonj Kim are the faces of Need To Know, MTV News’ flagship video franchise providing real-time news stories and analysis. With Dometi and Yoonj’s unique perspectives, Need To Know covers what matters most to our audience, from pop culture to nationwide protests, while providing in-depth analyses.

Need To Know’s strategy hinges on listening to our viewers. In the beginning of 2020, the MTV News audience loved fresh takes on the biggest pop culture stories, along with our in-studio live panels and on the ground news coverage. But as the United States was struck hard by COVID-19, followed by a youth-led charge against systemic racism, and ongoing natural disasters, Need To Know pivoted to taping episodes from home and shifted tactics. During this time, instead of focusing on pop culture, the series provided vital information of health and safety during the pandemic, as well as tackling stories pertaining to voting and the steps to take in order to change policies most crucial to young people.

Need To Know chooses stories that either everyone is talking about or that everyone should be talking about. Our crew writes, shoots, edits, and posts each episode in a matter of hours, publishing every Monday, Wednesday, and Thursday.

Since December 2018, Need to Know has produced 715 episodes and amassed nearly 15 million views. In March of 2020, the show became completely remote. Over nine months, Need to Know produced 122 shows including three virtual panel shows covering entertainment tentpole events like the MTV Video Music Awards to politics and the 2020 Election, resulting in more than 6 million views across all platforms.