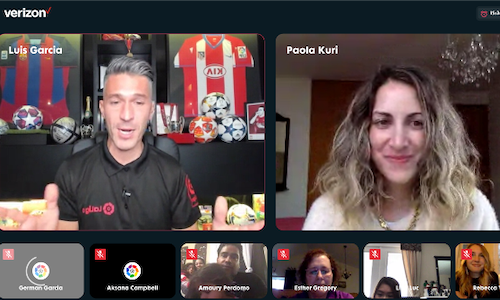 As a result of the ongoing Covid-19 pandemic, LaLiga North America was looking for a way to try to engage directly with American fans in a safe manner. The team wanted to ensure that fans were still able to connect to one another and enjoy a game together virtually. With that in mind, the team started to ideate around the concept of virtual watch parties and brainstorm how to create a VIP match day experience without a fan needing to leave their home.

To bring this to life, LaLiga teamed up with LiveLike, a next-gen OTT sports technology company working to deliver live sports experiences to fans. Using LiveLike’s technology, LaLiga built out a watch party model that replicated a VIP suite experience in a virtual setting. This entailed creating a virtual environment that could house a multiple of fans and allow them to engage with each other via video, audio, and chat box features, while being entertained by an event moderator and a LaLiga legend before the match and during halftime, with the live match video stream woven in throughout. With the event concept established, LaLiga worked with its current sponsor Verizon to offer three watch parties to Verizon Up customers in the first half of the 20-21 season.

LaLiga North America’s goal in rolling out virtual watch parties with LiveLike was to create a VIP match day experience in a virtual setting. This required creativity in finding virtual substitutions to the elements that make an in-person match day experience unforgettable for soccer fans. Honing in on the concept of building a virtual suite, LaLiga looked to LiveLike’s platform capabilities to build out the ability to host virtual meet & greets, offer polls and quizzes, engage via chat, audio, and video, all while serving as a platform for fans to watch the live stream of a match together live. LiveLike’s technology made this possible allowing the platform to serve as an enhanced, all-encompassing experience with the match stream included, rather than just a second screen experience.

Each event hosted between 20 and 40 fans, allowing it to be an intimate experience for all in attendance. The run of show for the event was simple, but filled with memorable touchpoints for fans that differed from anything else happening in the industry. Events started off with an event overview from a LaLiga anchor who moderated the entire experience, the moderator would then welcome a LaLiga Legend to the platform to discuss their playing days with one of the respective clubs that was about to take the field in a live fan Q&A before kick off. LiveLike allowed fans to be on video, providing them the opportunity to come off mute and engage with the legend directly. Once the match kicked off, fans were moved to another virtual room where they could watch the match together through a live stream embedded directly into the platform. During the match, fans could share their thoughts and reactions through a live chat box while also participating in polls and quizzes for the chance to win prizes. During half time, fans were brought back to the original room to engage once again with the LaLiga Anchor and LaLiga Legend. The second half of the match resembled the first, with fans gathering back in the Q&A room post-match for a farewell and announcement of the winners of the giveaways.

LaLiga teamed up with Wera Kuri - a Mexican soccer personality and women’s sports advocate - to host all of the virtual watch parties. Fluent in both English and Spanish, Wera was able to communicate with the diverse group of fans that assembled for each event and provide translations for LaLiga Ambassadors if they didn’t speak English.

With LiveLike facilitating all technical elements of the experience behind the scenes, fans were able to sit back and enjoy the match. This provided an effortless experience that was unique to the other virtual events happening within the industry - the majority of which relied heavily on being a second screen experience with limited opportunity for live interaction and no match feed integrated directly into the platform. Through partnering with LiveLike, LaLiga was able to create an innovative and engaging experience that provided exclusive access to former LaLiga stars and the match itself.

LaLiga was able to reach 130 Verizon Up members who were LaLiga fans over the course of three events on the LiveLike platform. Events were tied to top matches on the LaLiga including ElClásico (Real Madrid vs FC Barcelona), the Madrid Derby (Real Madrid vs Atlético de Madrid), FC Barcelona vs Atlético de Madrid. Each event brought in a legend that had played for one of the clubs, exposing the fans to historic players like Steve McManaman (Real Madrid), Diego Forlán (Atlético de Madrid), and Luis García (FC Barcelona and Atlético de Madrid). Fans had a 74.5% engagement rate with polls, quizzes, and widgets throughout all three events, and each fan sent an average of 11 messages in the chat per event. The high engagement rate on in-platform communication tools coupled with the face to face interaction provided through the video tools provided fans with an unforgettable experience and met LaLiga’s objectives to build a unique and unforgettable virtual experience using a cutting edge platform. 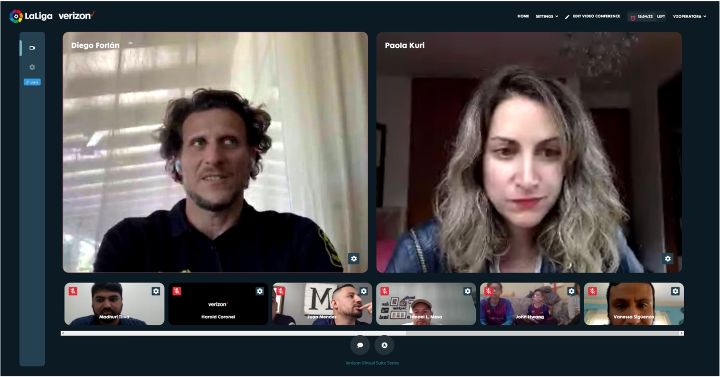