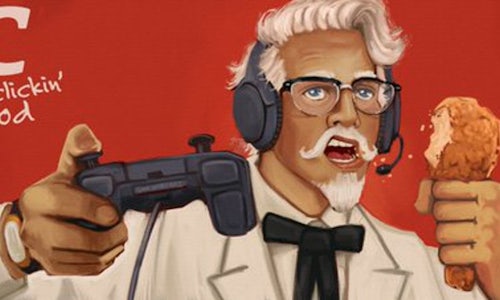 With 2020 being such a pivotal year for gaming (in part thanks to the launch of next-gen consoles, but also because of the impact of Covid on people’s at-home habits), Kairos were tasked with ensuring KFC generated a bucket load of conversation in the space.

And as a non-endemic gaming brand, it was paramount Kairos achieved this engagement in a credible, authentic way, and in also in a manner that increased brand sentiment and sales.

In addition to the sentiment and sales KPIs, Kairos were also challenged to grow the KFC Gaming social channels, increase salience amongst non-KFC customers, and bolster downloads of KFC’s app.

In short: in 2020 Kairos needed to make KFC the go-to brand for gamers on Twitter. Not just for a chicken fix, but for gaming news, entertainment and culture, too.

We knew that in order to capture the attention of our target audience of UK gamers, we  needed to go beyond the tried and tested mechanics for social engagement, and serve up content as fresh as the Colonel's chicken.

To bring this to life, the strategy consisted of always-on social content paired with big partnerships and even bigger ideas.

For the always-on social content, Kairos created & curated a non-stop stream of posts which reflected the lives of our gaming audience. From posts around the latest industry news, to throwbacks which tapped into the nostalgia gamers, gamers were treated to a daily dose of freshly seasoned memes, videos and posts.

Kairos took its always-on strategy to another level with two tentpole moments in 2020: the KFConsole and #KFCTheHunt campaigns.

For KFConsole, KFC entered the next-gen console wars when conversation was at an all time high. Following the Sony reveal event in June, Kairos saw an opportunity to hit KFC’s objectives in a way that most probably thought was unachievable. To truly entertain KFC consumers we decided to create our own entry into the console wars narrative, join the conversation and to take on the console behemoths head-on, “officially” launching our own KFConsole. The initial trailer turned into reality when Kairos partnered with Coolermaster and officially announced on December 22nd. We had more likes on Twitter than Xbox Series X’s official console reveal.

Elsewhere, Kairos brokered and launched a partnership between KFC and Microsoft for the launch of Xbox’s new next-generation gaming console, the Xbox Series X. The collaboration of always-on material and huge viral campaigns enabled KFC to become a prestigious player in the gaming space, while creating moments of cultural significance.

Named The Hunt, the digital activation of the Microsoft partnership saw gamers embark on an 11 step Twitter treasure hunt, winning Xbox SXs and custom KFC controllers along the way. Our objective for this, was to draw attention throughout via supporting messaging that KFC and Xbox had teamed up for an in-store promotion, pushing them to go buy a meal to win a console every day.

Within this gaming treasure hunt, the community worked together en-masse to crack the clues. This included in game challenges, anagrams in influencer content, riddles, community challenges, hidden messages within social content. Overall, this included 66,000 unique participants within our internet treasure hunt, all whilst drawing attention to a daily in store console giveaway tied to purchases, greatly increasing KFC’s sales and app downloads throughout the activity.

The results were immense and the numbers speak for themselves. The increase in followers highlight KFC’s smooth transition into the gaming space and the tongue and cheek tone of voice gave the brand authenticity and positive brand sentiment (not something many non-endemic brands achieve in the gaming industry). KFC Gaming is now one of the world’s leading gaming social publishers, which is shared within it’s unheard of engagement rates.

The two most notable campaigns “KFConsole” and “#KFCTheHunt”, supported by the unique always-on social content, generated mass awareness amongst the gaming community and beyond. KFC Gaming has been celebrated and seen results on Twitter like no other brand ever has within gaming.