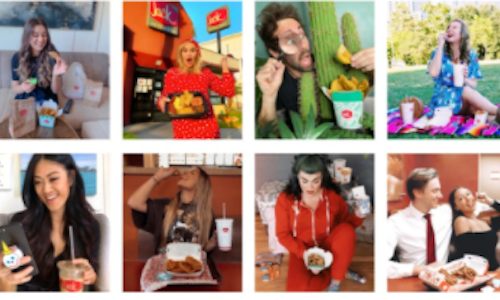 Jack In The Box Microinfluencer Strategy 2020

Starting in 2019, Jack In The Box began partnering with micro influencers to bring Jack’s Limitless personality to life through natural fans and influencers. As many competitors were investing in major celebrity talent, Jack made a commitment to pivot and prioritize the development of a robust micro influencer strategy that brought character, authenticity and connection to their consumers. In 2020, Jack In The Box’s strategy with activating micro-influencers was an always-on approach that lived across Instagram, YouTube, Twitter, and TikTok. This approach tapped into different demographics and interest groups all while providing their fans with entertaining content, special coupons and one of a kind Jack swag.

Jack In the Box’s 2020 micro-influencer strategy kicked off with an activation based around the launch of Mini Munchies. This program focused on identifying and activating fun, vibrant college students in specific markets, and asking them to promote Mini Munchies through Instagram posts and stories. This micro campaign resulted in a 22.6% engagement rate, 2.12% story engagement rate and 71.2K impressions and large library of UGC assets for the brand to leverage on social and in paid social. Seeing positive lifts in reach, engagement and sentiment in its micro-influencer efforts, Jack has continued to build on the micro-influencer strategy, with longer term partnership with some of Jack In The Box’s micro influencers. This work has transgressed into other areas of the QSR brands business, including sending micro-influencers to attend the Sonic Movie Premier, live activations, virtual events such as Prom In A Box with Dipolo and charitable programs benefiting No Kid Hungry. The brand has also leaped into the hyper-focused world of foodie content online and in social media through foodie micro-influencers. These types of talent have increased intent to try sentiment and engagement, especially for limited edition and new product rollouts.

In tandem with Jack In The Box integrating their new micro partnerships into experiential, social and digital activations, the brand launched Fans Of The Brand, an always-on approach to micro influencer marketing. The idea stemmed from identifying an opportunity to monitor sentiment and conversation over social media to tap into the tried and true brand advocates of Jack In The Box. The program activated 97 fans in 2020, reaching 500K+ potential consumers via IG. There was no hard cash put behind this program, instead, Jack In The Box nurtured and curated these relationships through exclusive swag and interacting from Jack In The Box’s social accounts on a personalized level.

Both one-off and ongoing micro influencer efforts have grown overall positive brand sentiment, conversation and drove an increase in organic content being produced. Additionally, micro-influencers assets were used for paid amplification across social channels. They have delivered some of the best results with paid media support; driving higher results on store visit and brand lift studies than the brand benchmark on both standard and influencer creative.

Working with foodie micro influencers, the brand has been able to leverage these individuals platforms outside of social. Talent is given keywords to include in blog content that helps drive SEO, engagement, and sentiment.

With Fans Of The Brand, Jack In The Box was able to establish Moments of True Fandom and monitor via a unique program hashtag #KnackForJack. They identified real everyday consumers who express excitement for Jack In The Box’s products and swag and in turn, they shared their unique brand experience with their community. This initiative led to a spike in organic posts, with 58% of Fans who received swag sharing it on social. Jack In The Box has measured sentiment, garnered UGC, and developed brand loyalty through these efforts, all while growing a deeper connection with their harder to reach niche consumers such as gamers and anime enthusiasts. When Covid hit, Jack In The Box’s micro programs allowed for easily executed, quick pivots in messaging to support drive-thru, delivery and safety. With talent relationships that had been carefully cultivated, micro-influencers were eager to help support JIB in their “new normal”. 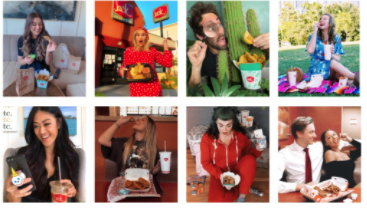