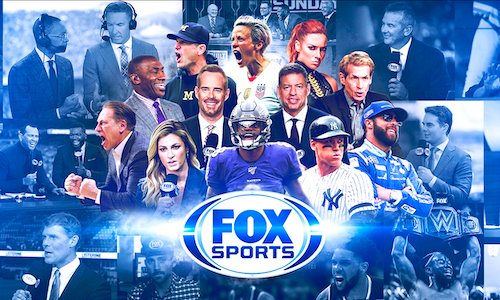 The year 2020 started out as planned for FOX Sports. As the broadcast home of Super Bowl LIV, the network’s digital team served fans during FOX Sports’ biggest and grandest rollout of the Big Game, to the tune of more than 125 million views across social platforms. Not long after the Super Bowl; however, the FOX Sports digital department mobilized quickly in the wake of the sports pause caused by the COVID-19 pandemic, producing and innovating in ways that brought fans closer to the teams, athletes and games they love. FOX Sports’ digital team will remember 2020 for the creation and development of multiple programs and franchises: Quarantine Calls with Joe Buck, two Ultimate Fan Brackets (college basketball and NFL), six interactive Watch Parties for the 2020 MLB World Series, the launch of a new app and website and the premiere of “Club Shay Shay,” one of the year’s hottest sports podcasts. Each of these projects showcased FOX Sports’ commitment to serving the sports fan of today and tomorrow.

FOX Sports opened 2020 with a bang at Super Bowl LIV in Miami. More than 2,000 pieces of video generated over 125 million views across platforms, including two ambitious live stream presentations: “The ReUnion,” a walk down memory lane with the greatest Miami Hurricanes of all-time and the “Super Bowl LIV Watch Party,” a second-screen experience featuring gridiron legends Joe Montana, Drew Brees and Brett Favre.

With sports on pause, Emmy-award winning announcer Joe Buck turned to social to engage with fans directly. Buck and the FOX Sports’ digital team launched “Quarantine Calls,” a campaign that invited fans to submit personal triumphs from their time at home. From indoor sports to barbecuing and marble racing, the campaign put the fan front and center, creating brief, pandemic-era stars.

When March Madness was canceled, college basketball fans were left staring at empty brackets. FOX Sports harnessed the unbridled enthusiasm fans have for their NCAA teams and created its own version of the tournament with the “Ultimate Fan Bracket.” The contest determined the best fan base in college hoops, with fans voting via Twitter. Shoulder content was produced for FOX Sports’ other social platforms to increase engagement and awareness. The campaign was so successful that the concept was replicated for the 2020 NFL season.

FOX Sports assembled an ambitious plan to host an interactive Watch Party during every game of the 2020 World Series, hosted by former players Nick Swisher, Rick Ankiel, Tino Martinez and Ben Verlander. The digital team not only prepared to execute events for the guaranteed four games between the Los Angeles Dodgers and the Tampa Bay Rays, but also created contingency plans should the series extend through Games 5, 6 and 7. The unpredictability of the World Series showcased the team’s adaptability, creativity and innovation by utilizing the new cloud-based and remote technology implemented during the pandemic.