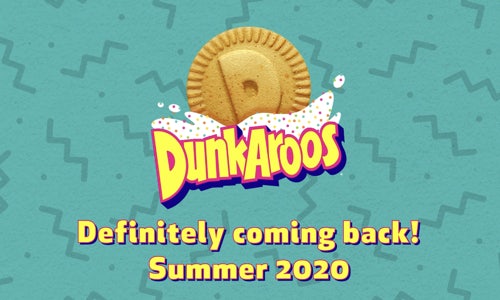 Dunkaroos: Back and Bigger than Ever

From the prized possession of any lucky kid in the school cafeteria to mere childhood memory, by 2020 Dunkaroos existed only in listicle articles asking people if they remembered “these 10 snacks from the 90s”.

While absent from shelves, Dunkaroos certainly weren’t forgotten. Since their retirement in the US in 2012, an overwhelming amount of passionate requests for the return of Dunkaroos flooded social media. This led General Mills to (finally) decide to bring back Dunkaroos in 2020.

The goal? Get people excited about the return of Dunkaroos— and not just those who remember Dunkaroos from their childhood. We wanted to go beyond tapping into the nostalgic love for Dunkaroos to build a new generation of fans. In case that wasn’t challenging enough, we need to find a way to do everything organically without the help of paid advertising.

We didn’t want to simply launch with a bang and have people move onto the next piece of trendy, clickbait news. Before the official launch of Dunkaroos, which was scheduled to take place on the Monday after the Super Bowl, we wanted to create a frenzy of hype, interest and speculation before the big announcement.

The first step was to get people curious and talking about Dunkaroos. We secured the @Dunkaroos handles on social and got the accounts verified. Additionally, on Instagram we shared a close-up photo of Dunkaroos frosting with the cryptic caption: “👀”. We knew that this would give pause to anyone who stumbled across the profiles.

Dunkaroos is on social?

ARE THEY COMING BACK?

The goal was to incite a groundswell of chatter that would ultimately lead to a surge of followers to Dunkaroos’ new social accounts with the ultimate goal of sharing the official news that Dunkaroos was returning to stores.

We knew Dunkaroos had some devoted fans. But the outpouring of excitement and love for the brand exceeded all expectations.

We revisited celebrity and fan posts from the last few years demanding the return of Dunkaroos and dropped hints about the launch, as well as strategically following a specific roster of nostalgic 90’s brands on Twitter and Instagram to bring the full 90s experience to life - or as the Backstreet Boys would say, we made it “larger than life.”

It was time to stop teasing and finally tell people the good news. On the Monday after the Super Bowl, we announced that Dunkaroos would officially be returning to stores in Summer 2020 (which some would argue was more exciting than the Chiefs win).

The return of Dunkaroos was successful beyond everyone’s wildest dreams. During just the teaser phase of the campaign, without an ad or even an official product announcement, Dunkaroos gained more than 70,000 followers on Instagram. That’s the same number of people as the population of Scranton, Pennsylvania. Humble brag.

Our first three posts for the launch on Instagram earned a combined 1.37 million impressions and nearly 350k engagements.

Celebrities from Kim Kardashian to Joe Jonas to James Charles chimed in to share their excitement. News outlets including CNN, USA Today, Newsweek, People, Hypebeast, The Shade Room, and countless others covered the launch.

But what about sales? In the summer of 2020, as Dunkaroos slowly started arriving in stores, they disappeared almost as soon as they arrived, with some customers buying the entire display. To this day, it is still difficult to keep Dunkaroos in stock as we work to increase production.

Since the launch, we’ve rolled out branded merch and expanded the product line with Dunkaroos cereal and sugar cookie dough.

The culmination of listening to fans, teasing the launch, and adopting a voice and content strategy based in modern nostalgia made the return of Dunkaroos successful beyond all expectations. And in a year like 2020, helped us all party like it’s 1999. 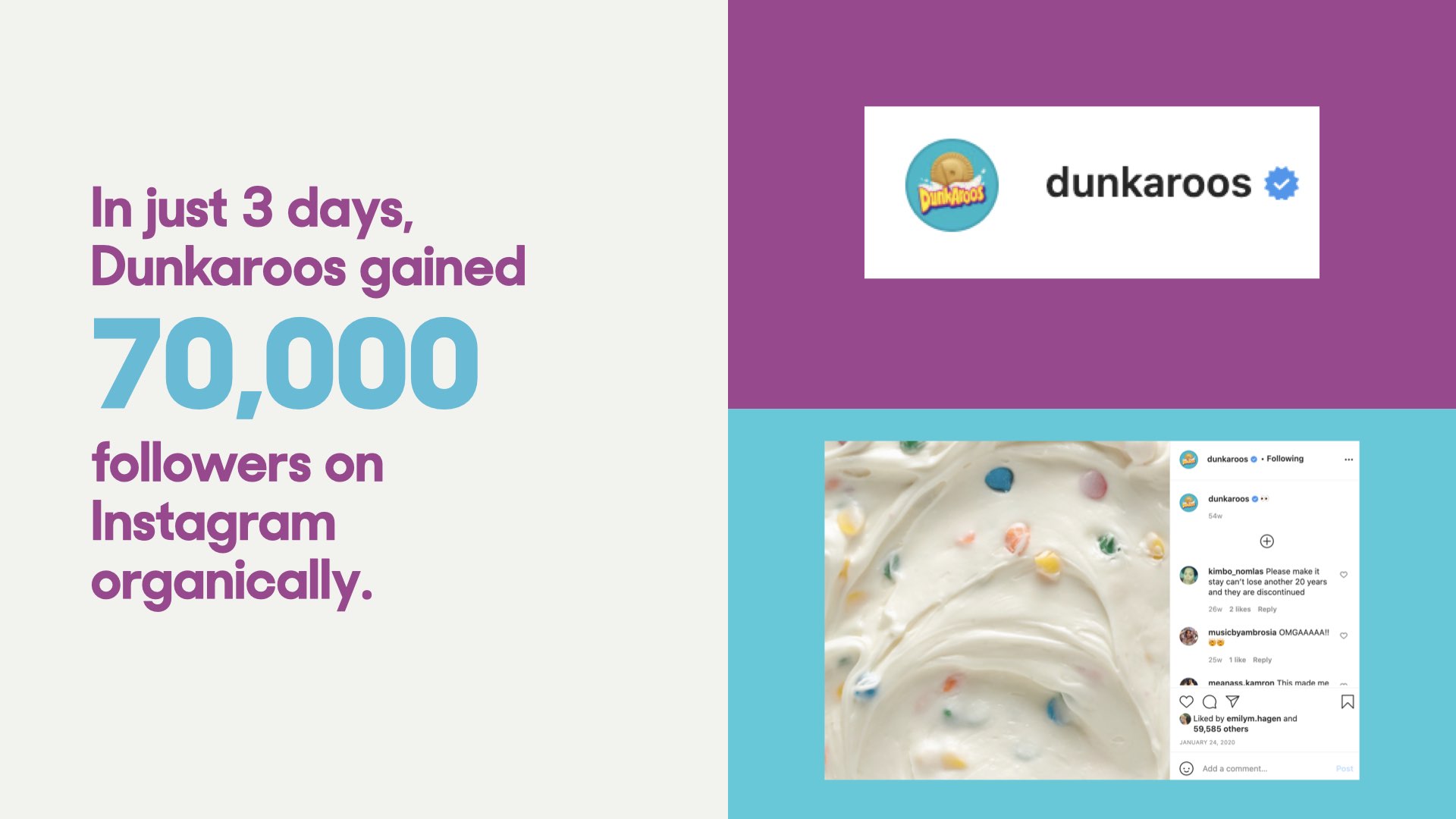 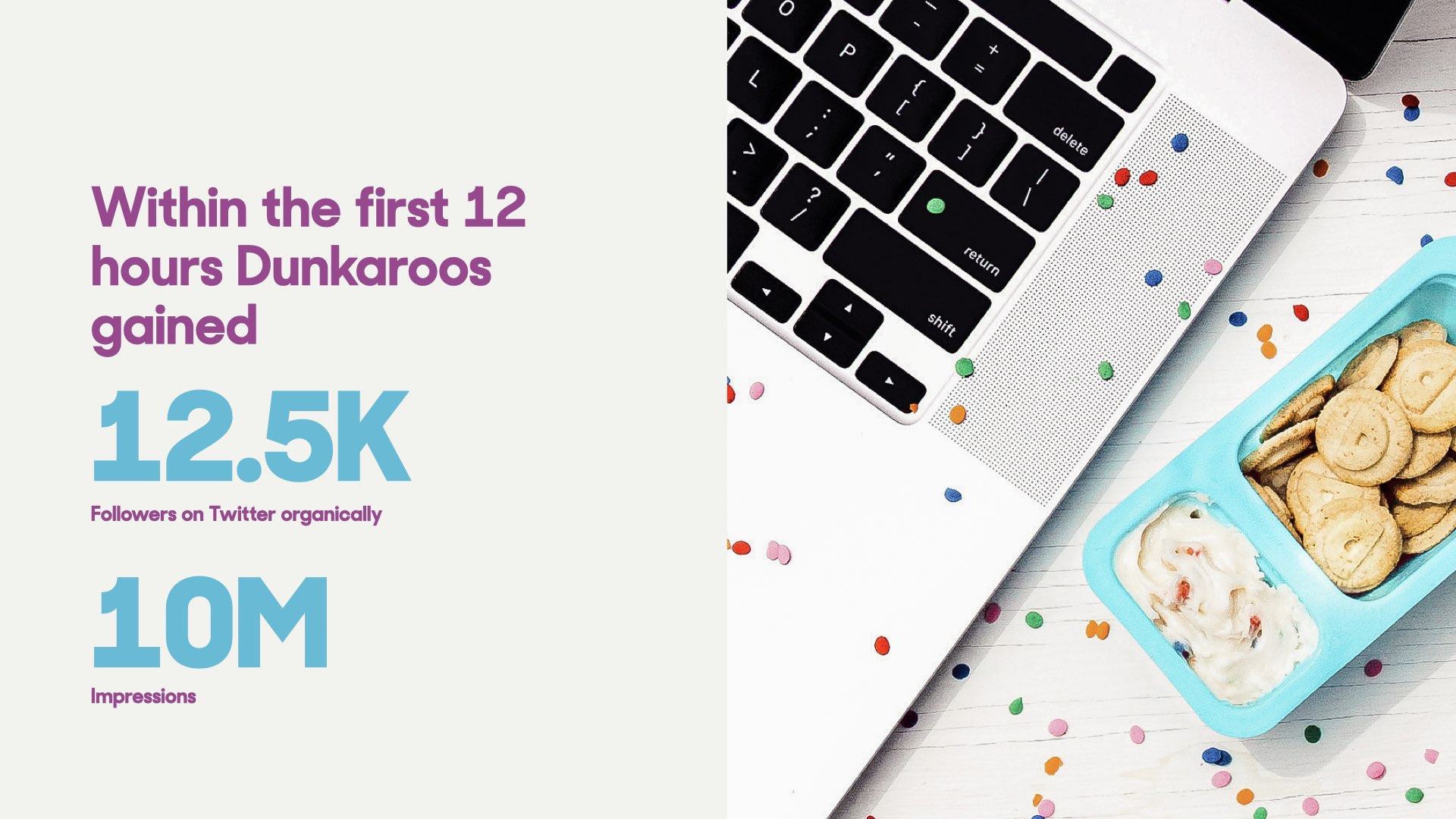 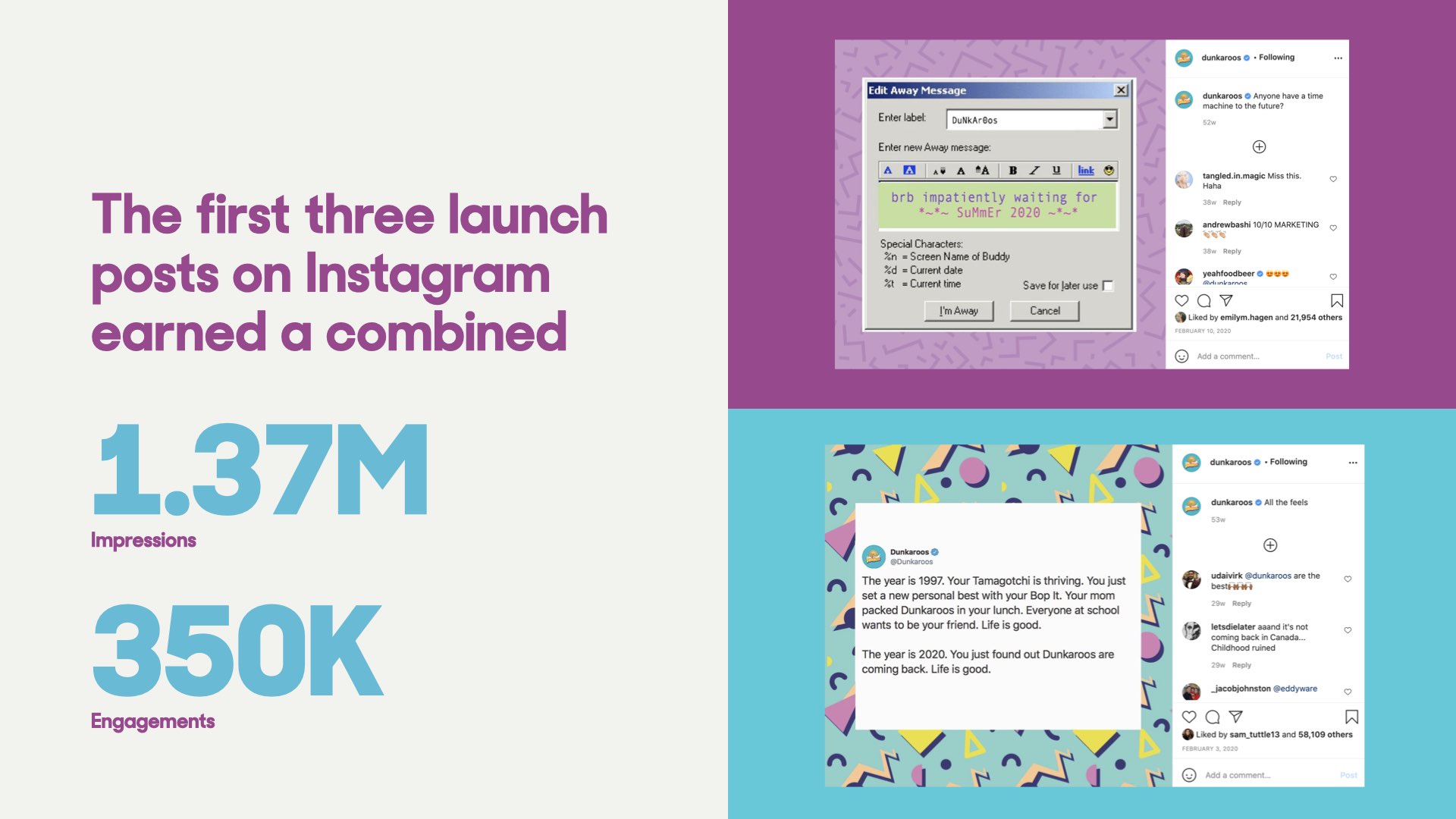 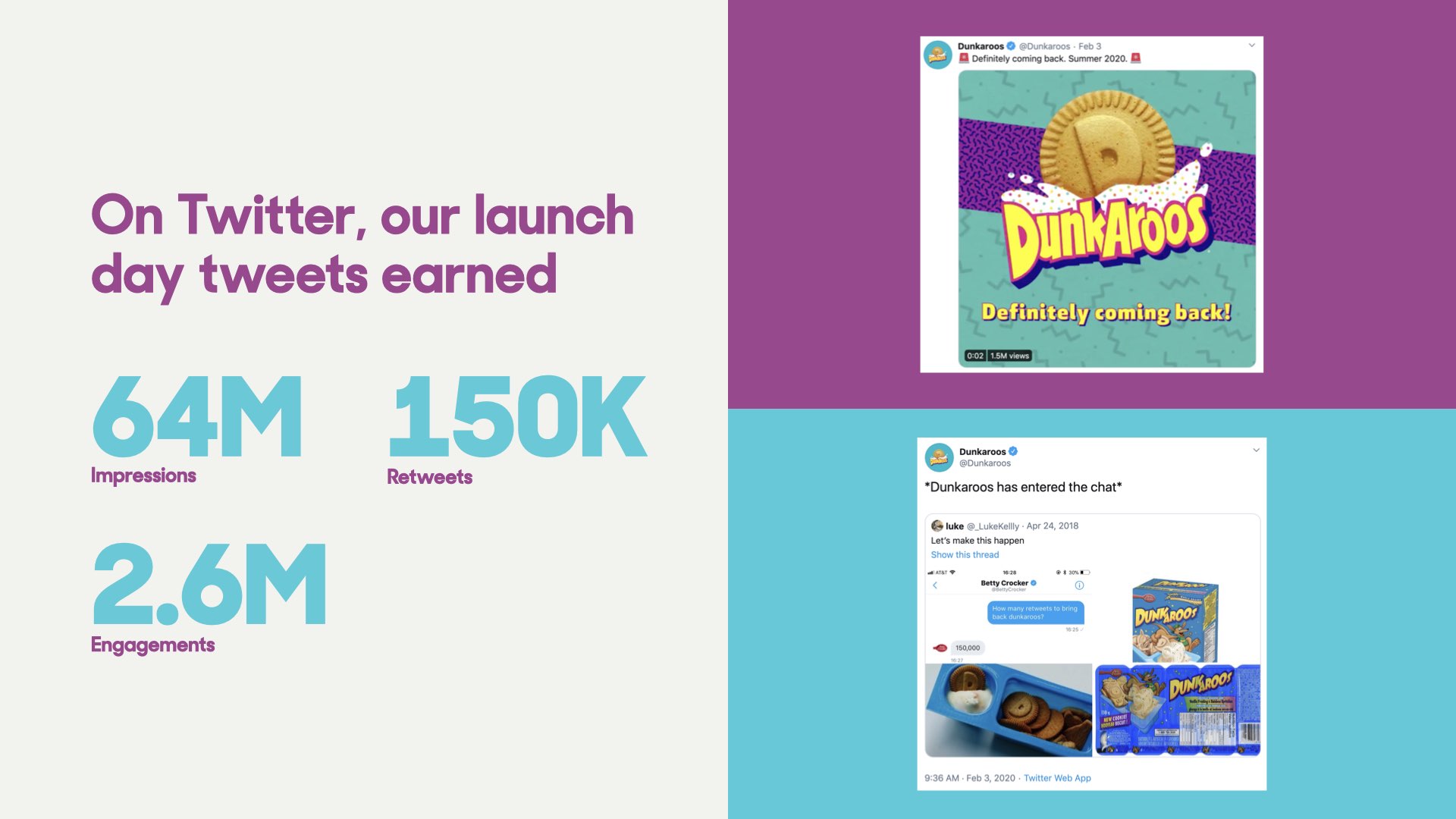 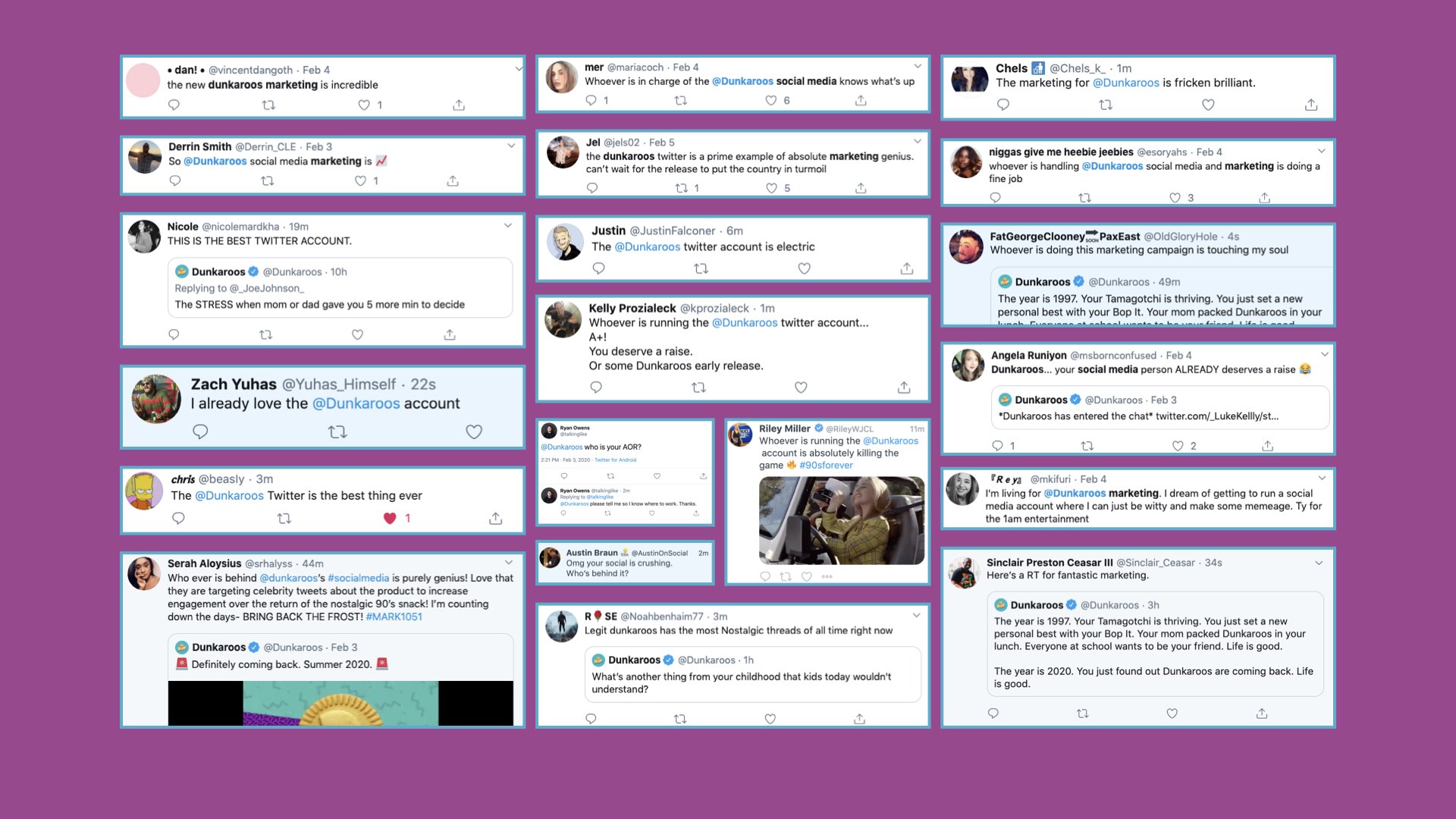 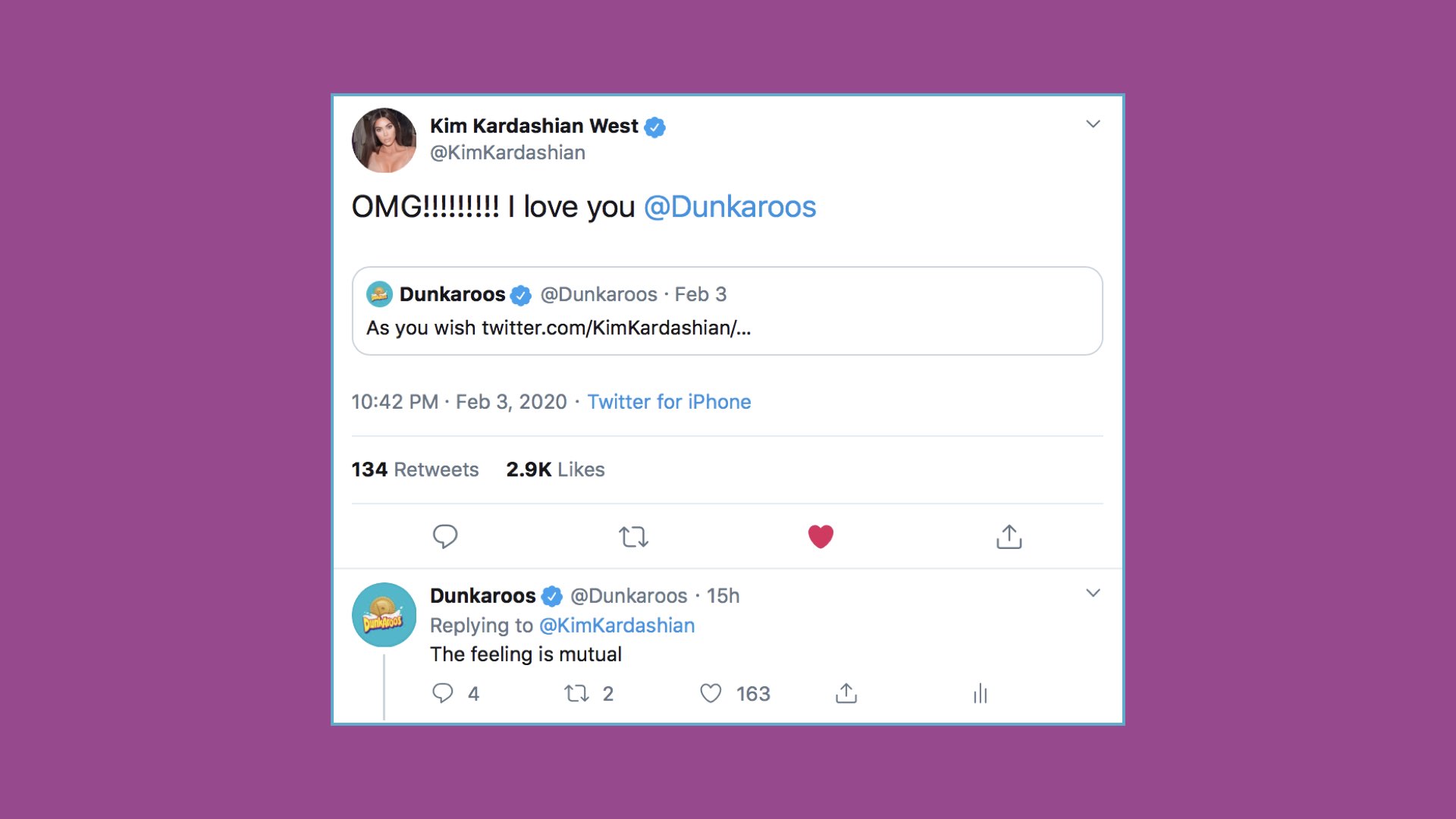 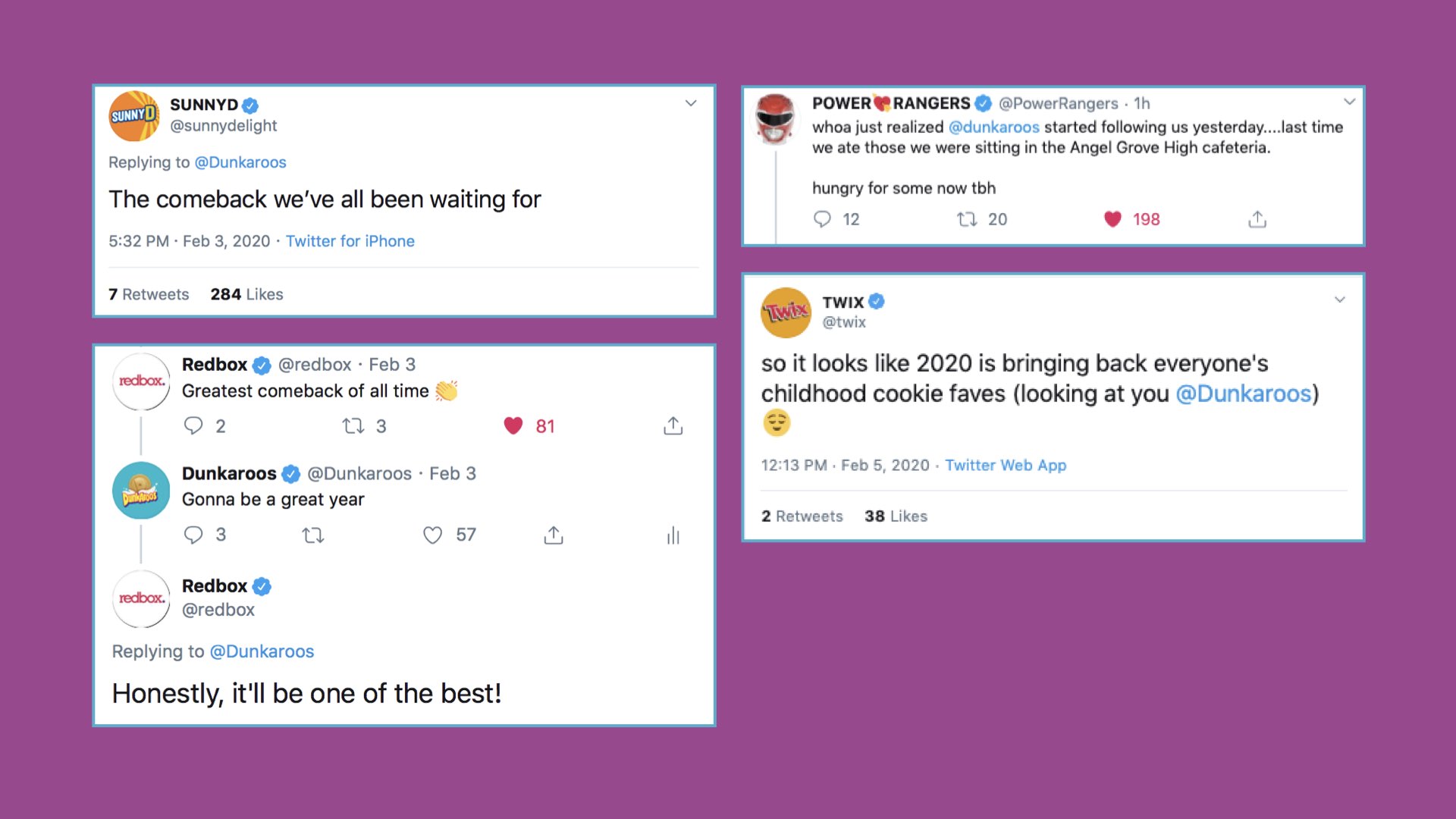 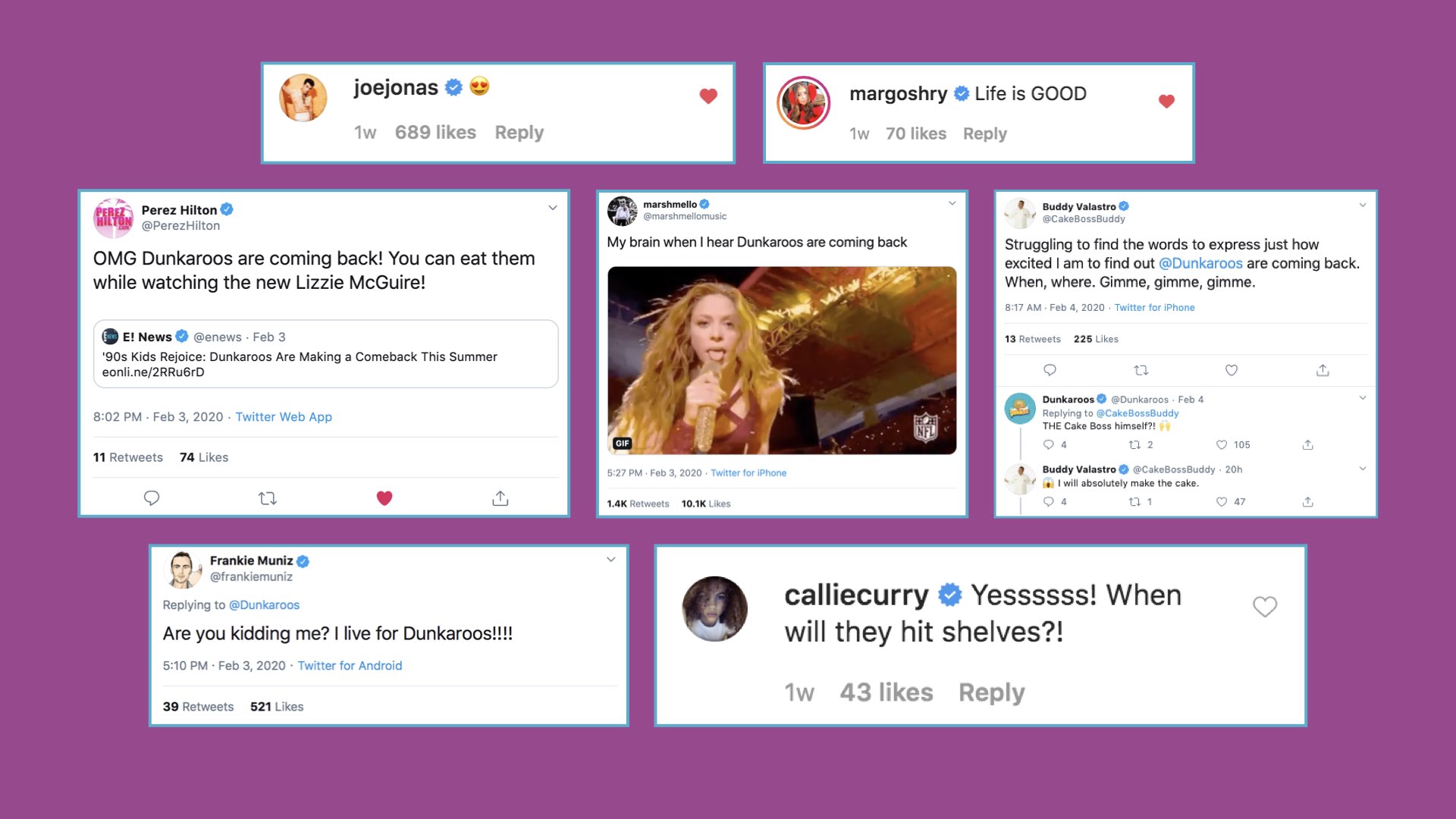 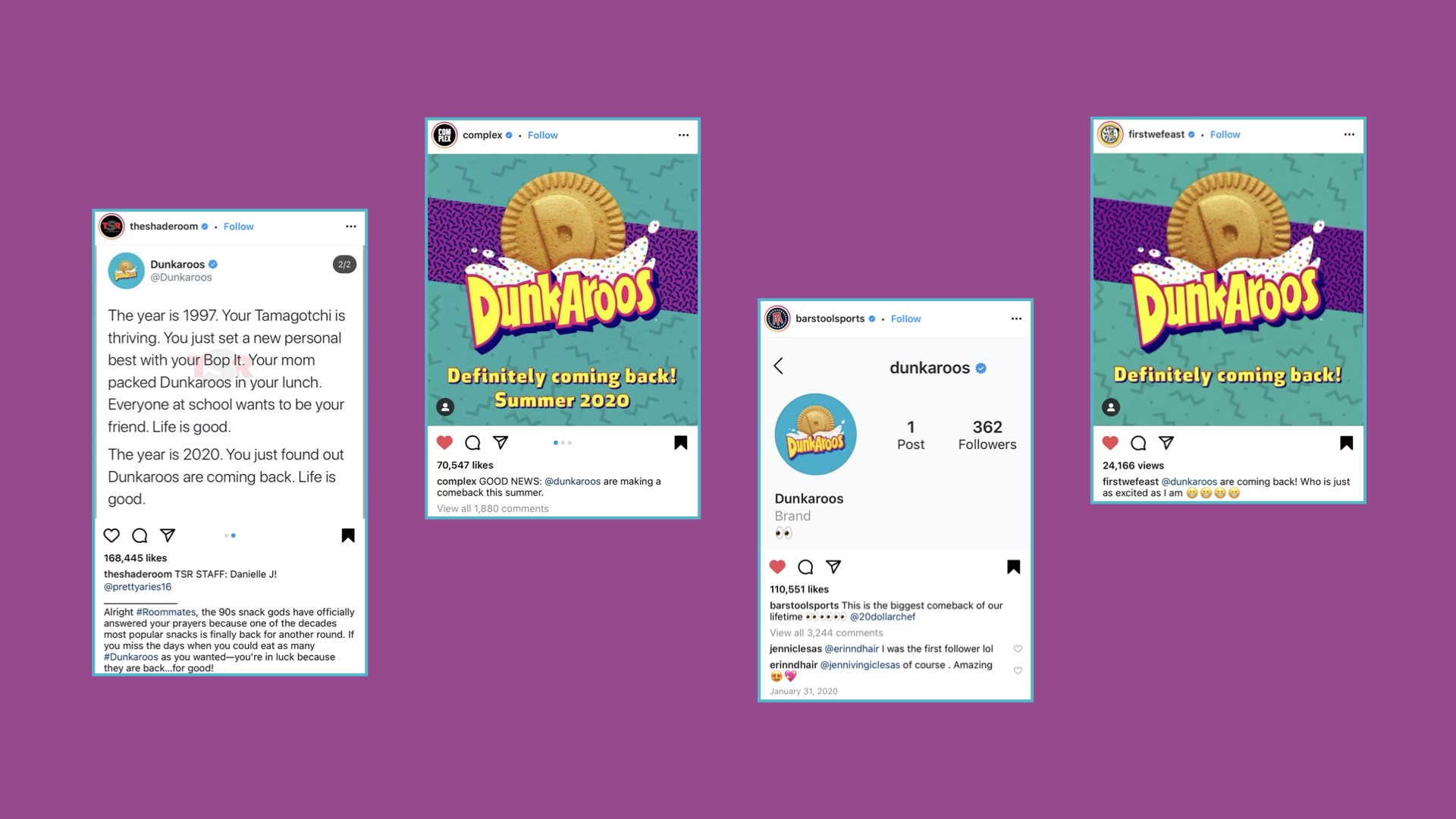 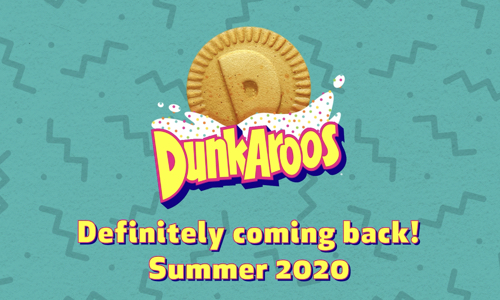