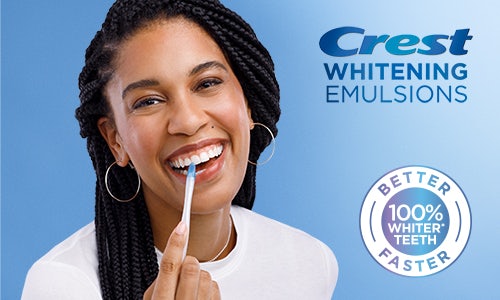 Building on their portfolio of teeth whitening offerings, Crest introduced in 2020 their new Crest Whitening Emulsions, featuring three new products utilizing first-of-its-kind technology. In debuting a breakthrough innovation of this type – to be marketed as the better, faster, easier teeth whitening experience for consumers – a key goal was building awareness in a way that would clearly convey the nature of the product and how it differed from anything already available in market. Following naturally were the goals of driving traffic to the DTC website and consumer conversion. Part of the creative challenge in introducing this new product line would be identifying a “beauty” audience that would respond positively to messaging that encourages teeth whitening as an important part of their everyday beauty routine, rather than a “one off” occasion. Targeting this new audience would reflect a strategic shift in focus for the brand.

The campaign had two strategic milestones to start:

Pre-launch (starting Sept 1, 2020) – Key to the success of the pre-launch was the “Be the first to try” sign-up messaging and creative, which introduced the product, drove to educational landing pages and prompted email signups to be the first to try, and have access to purchase, Crest Whitening Emulsions. Days later, an initial email blast was sent to 200k+ existing email subscribers to CrestWhiteSmile.com, as well as new early registrants for the pre-launch sale, making them aware that the product would be available in limited quantity, further driving excitement, exclusivity and early buy-in of an already-interested audience. By Sept 8, more than 15,800 people signed up.

On September 8, the limited quantity, 24-hour sale began on the DTC website; product sold out within 90 minutes. The team quickly pivoted to release additional product to see how many units could sell in the first 24 hours. On September 14, Crest Whitening Emulsions went live on the DTC site and an Integration/Media day was held.

Official launch (Sept 15, 2020) – Launch day included a full media push, press release distribution, and a range of beauty influencer content, all incorporating language about the significant pre-launch demand, in order to drive urgency. MMI Agency supported these efforts by repurposing and branding influencer content to be amplified from the brand social handles.

The campaign was designed to utilize a multi-channel approach to engage a new and diverse “beauty” audience in places they routinely consume content. This meant that virtually all social channels and display ad networks presented viable vehicles to serve the goal of building awareness and driving traffic.

Accordingly, much of the early creative would prompt consumer realization that "this is something new." These introductory assets would feature bold (but fully supported) claims that offer solutions to real consumer needs and bring about real category disruption. As such, communicating these benefits in a clear and compelling way was paramount to a successful introduction and product acceptance. Key consumer teeth-whitening issues, and the corresponding Crest Whitening Emulsions solutions include:

Assets were designed with the intent to tell a story throughout the consumer journey. The language incorporated in the email campaigns intentionally had an "insider" feel, to evoke themes of exclusive access and convey a sentiment of "we wanted you to be the first to know." The website was primarily positioned as the chief resource for people to learn more. Accordingly, all of the web content was highly educational and spoke to differentiators, explaining how the product incorporated never-before-seen advancements.

The pre-launch email on 9/1 resulted in an extremely high open rate of 26%, with a 2.4% click rate. On 9/8, the limited release offering was sold out in 90 minutes, and the extension of the sale (to make product available for the full 24 hours) resulted in exceeding the sales goal by 4.2X units sold. Revenue for Crest Whitening Emulsions, alone, during the 24-hour sale actually exceeded revenue from sales of the entire CrestWhiteSmile.com product suite from the entire month preceding launch, resulting in an 82% sales lift vs. the previous month’s daily average.

Also since September, Crest Whitening Emulsions has rapidly ascended through the ranks of all products offered on CrestWhiteSmile.com (12 SKUs, total), to consistently be in the top three, underscoring the lasting impact that the strong kickoff has had on providing a compelling, ongoing reason for people to buy. 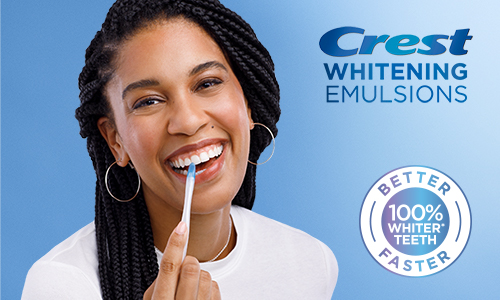