PBS series NOVA, Antiques Roadshow and Arthur are some of the most watched educational shows on television. But as producing station GBH expands beyond broadcast and linear VOD, how can we adapt this valued content for new platforms and introduce new viewers to public media, while giving long-time fans new ways of engaging with the shows they know and love?

To find out, we created Chat Plays GBH, an interactive, live-streamed variety show inviting viewers on Twitch, Facebook and YouTube to “play” TV by controlling GBH shows in real time. Working entirely remotely across three time zones, we reimagined the variety format for an online environment: assembling a unique suite of innovative tools maximizing available technology to build virtual sets, integrate live content with existing media, and bake real-time engagement into the heart of the narrative.

GBH realized early on interactive live streaming presents a unique opportunity for fulfilling the public media promise of providing educational, enlightening and engaging content for all. The pandemic made delivering on that promise in innovative ways even more urgent. So we teamed up with Hovercast to experiment with a new generation of public media programming — one that is live, social and made by viewers like you.

Chat Plays GBH integrated live interactive elements, graphics, archival video, live scoring and a synced multi-camera field shoot with more than 20 live video feeds from across the US to create five increasingly interactive new takes on classic GBH productions. Our goal was to create Chat Plays GBH with the audience instead of for them, so we designed it from the ground up as a virtual production.

Led by live co-hosts, the stream kicked off with AMAzing Space with NOVA, an AMA-style conversation with two space scientists, one of whom had just discovered signs of microbial life on Venus. Questions from chat were curated, featured on screen and integrated into the live conversation with Hovercast.

Next, Antiques Roadshowdown ramped up interactivity by challenging viewers to become appraisers, competing to guess item values and answer trivia questions via polls. Scores were tallied on a leaderboard, and the winner was named Roadie Scholar of the Day.

Choose Your Own Arthventure tapped into the Internet's love for Arthur by inviting viewers to assemble a new episode of the PBS Kids show from fan-favorite clips. Chat gained agency in the story by using polls to decide which clip would play next, and an Arthur producer joined one of our co-hosts to bridge transitions, share behind-the-scenes Arthur details, and keep the audience engaged.

Stream Cuisine with Joyce Chen was a YouTube vs. Twitch cooking competition inspired by 1960s GBH culinary education show Joyce Chen Cooks. In the first known instance of live cross-platform crowdplay, viewers competed in teams based on their platform, using polls to control an on-camera chef who had to do whatever their team said. This segment was shot live in the chefs’ home kitchen, integrating two additional live camera feeds through vMix.

Chat Plays GBH culminated in Chatsterpiece, an experience fully co-created with the audience. We invited viewers to write, produce and direct a murder mystery in homage to GBH broadcast institution Masterpiece, performed by six on-camera improv artists in five different locations. Producers responded in real time as chat directed what happened on screen through meters, polls and open-ended messages. Viewers drove the narrative, selecting character profiles like hot priest and gin-drinking illusionist, deciding the story would take place at the reading of a will in a castle, solving the first murder and committing a second by choosing to kill the narrator.

To pull all of this off, we built a custom workflow combining Hovercast with vMix virtual control room software, Wowza Streaming Engine, Zoom, Discord and Slack. We created virtual sets and managed engagement in Hovercast, layered that in with live-switched feeds and video clips in vMix, pushed to Twitch, YouTube and Facebook through Wowza, shared a line view with the production team via Discord, communicated with producers via Zoom audio, hosted a virtual green room on Zoom, and connected all the dots in Slack.

Over the course of the day, Chat Plays GBH had more than 275,000 organic views with over 750,000 minutes watched across platforms. Twitch selected AMAzing Space with NOVA from a crowded field for front page promotion, starting the stream off strong with over 9,000 live concurrent viewers.

Based on our experience creating the show, we developed a framework for interactive livestream production as a resource for other producers interested in the format, and have advised across the organization on remote production tools, techniques and best practices. 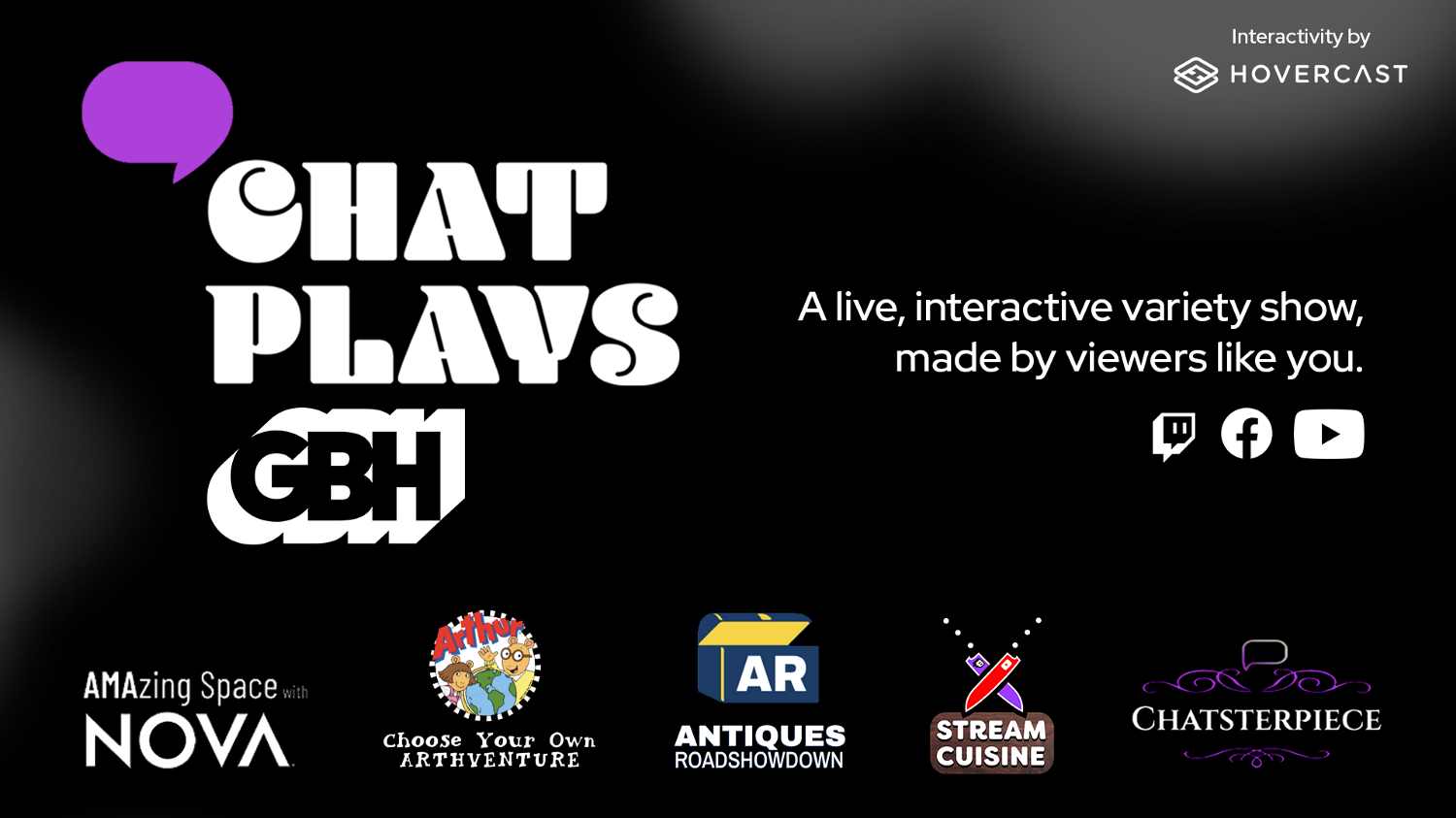