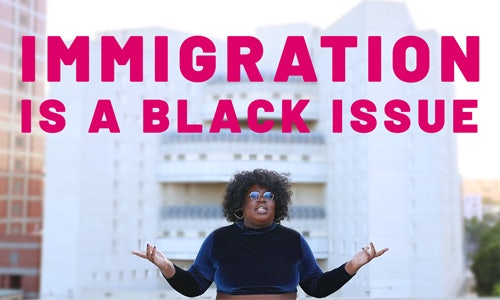 Immigration is a Black Issue

As a national immigration organization with a 200-person legal team, RAICES is in a unique position to see what’s really happening on the frontlines. Last year, as protests spread across the country in the wake of George Floyd’s murder, we were collecting data that shows how the cruel injustices against Black people in policing were also present in the immigration system.

It was an important moment to unite people across seemingly different causes by showing the intersectionality between racial justice and immigrant rights that had never before been discussed in the mainstream.

As our video campaign says, “the immigration system is nasty for everyone, but it’s even nastier for Black people”. And that’s what we wanted viewers to understand, share, and be motivated by long term. After all, you can’t fight something if you don’t know it’s happening and that’s the problem we’d noticed time and time again for Black immigrant rights.

It was important for us to create a meaningful moment of understanding around this complex issue across platforms and news media, with diverse audiences; a moment that would in turn propel viewers to continue educating themselves and sharing with others on a journey that we hope will lead to meaningful systemic change. To do this, we pursued an organic roll-out around a lively video, knowing the elements and topic would speak for themselves.

To make this video with so much hard data resonate and lead people to share, it had to be authentic and engaging. So we partnered with Joyce Louis-Jean (@atribecalledJoyce), an influencer of Haitian descent who was keen to collaborate on an issue close to her heart. Joyce doesn’t typically cover immigration but when we began talking about the idea with her, we saw that her personal style and commitment would ensure this topic would connect with her 60k Instagram audience and snowball from there. We worked directly with Joyce from the beginning to make sure that the narration was true to her voice, that the production felt right to her, and that the share copy was in her no-BS style.

We knew we would be presenting lots of data – which can be tedious – and upsetting information – which viewers may choose to click away from – so we had to make sure the style kept viewers interested and engaged. We used a range of production techniques to create a tempting and fun package despite the upsetting content. You’ll notice the video starts beautifully with Joyce surrounded by a bright pink bugambilia, intended to stop viewers from just scrolling by. It then follows Joyce around on her journey to relevant locations across Los Angeles, including an immigration detention center and an immigration bond office, creating a constant sense of movement. In the spirit of this video being the first step of a journey, light orchestral music helps carry the story through. We wanted to avoid heavy or somber music so common in videos covering similar material since we were worried about losing viewers already struggling with constant 2020 bad news! Even though we present complex data to the viewer throughout, it never feels overwhelming thanks to the simple, clean graphics with tempting colors and Joyce’s powerful, engaging narration.

Since this story was so personal for Joyce, we decided the best roll-out strategy was to have her release the video to her 60k+ Instagram followers exclusively at first, before sharing on our own social media. As the video was quickly picked up and shared by other influencers, Joyce shared these in her stories. Meanwhile our social media team approached a few select influencers (such as @iambeckyg) and organizations who were passionate about the issue.

In conjunction with the video rollout, we worked with our partner organizations to produce a Livestream that same week and created a landing page with further information and resources to compliment the video for people who were moved to get directly involved. All the pieces were designed to fit together, with the video as the centerpiece.

Within hours of Joyce releasing the video, it went viral with organic shares from influencers and congresspeople, including AOC. We got one million views across platforms within days, with hugely diverse audiences showing how we’d successfully navigated the intersection of racial justice and immigrant rights. We soon saw publications large and small independently covering racial injustice in the immigration system, often referencing us (for example, Teen Vogue cited our work and data).

We were also moved when the Movement for Black Lives (MBL), an organization representing 50+ Black grassroots organizations, screened the video at their 2020 convention. For us, this was a clear demonstration of the impact this video was having in uniting groups across causes and creating an environment of supportive, sustainable learning that would benefit Black immigrants. MBL even shared the video on Instagram again in February 2021.

The video took on a life of its own when people with huge followings downloaded the video on their own and uploaded to their own platforms. People began translating the video into their native languages, including Korean. The video reached people who left comments of gratitude for bringing this to their attention as well as immigration law experts who went on to cite the video in policy recommendations sent to the White House.

We believe with time and more videos like “Immigration is a Black Issue” that bring movements closer together we can create meaningful change.

Video for Immigration is a Black Issue 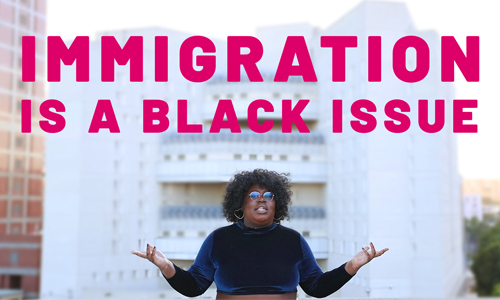