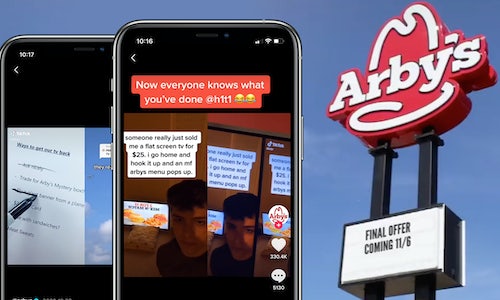 Arby's is always on the lookout for buzzworthy opportunities to spark conversation and drive positive brand sentiment––and we know that TikTok is a perfect channel to stand out as a brand by appealing to a younger and more digitally-engaged audience. So, when a Gen Z TikTok user from Florida named @h1t1 posted a TikTok, in which he described buying a $25 flat screen TV, we knew we had a great opportunity to steer the conversation and make something cool happen.

@h1t1’s TV looked normal, except for one thing: when he turned it on, it mysteriously displayed the Arby’s menu board. Arby’s hopped on it quickly, fueling intrigue about the origins of @h1t1’s mysterious television by simply commenting, “we’ve been looking for this!” The massive social and PR buzz that followed over the coming weeks was achieved through a mixture of strategic content planning and genuine consumer engagement.

Consumer trust comes from being able to relate to a brand. People like brands that feel authentic and like-minded, especially on social. So, with that in mind, our strategy was to increase social media engagement by connecting with untapped audiences through a fellow fan strategy. We aimed to deliver creative content that strengthens Arby’s relevance and brand affinity by celebrating fans’ interests, creating a space for fans to come together. The result is a deeply loyal and highly engaged fanbase whose affinity for Arby’s brand is unmatched within the QSR industry.

One of Arby’s key strategies for connecting with fans on that ultra-personal level is leveraging social listening to identify opportunities for the brand to activate on real-time, trending moments. Arby’s responded quickly to the initial viral video from @h1t1 and was able to craft a real-time narrative that carried out the following weeks, driving high engagement throughout while staying true to Arby’s witty, down-to-earth, fellow fan tone on social.

As audiences on TikTok and beyond caught wind of the hilarious “beef” between Arby’s and @h1t1, users began creating their own videos around the narrative. From new characters in @h1t1’s stolen menu story to people “discovering” similar Arby’s TV menus in unexpected places like new cars and used electronics, it took on a life of its own.

Arby’s seized the opportunity to proactively engage in the conversation, giving its audience even more reasons to share and participate. From hacking an actual Arby’s menu screen to display @h1t1's original video to tracking down @h1t1 and flying an airplane towing a banner over his head that read “we want our TV back,” Arby’s curated real moments that allowed @h1t1 to create his own original content to keep his fans engaged.

The banter and “negotiations” between Arby’s and @h1t1 continued over 40 TikTok videos, ultimately landing on an agreement for Arby’s to send a Mystery Box in exchange for the “missing menu.” Fans speculated what was inside, and news outlets from coast to coast reported on the now viral interactions.

The Mystery Box included a giant flatscreen to replace his “broken” one, as fans had speculated it might, but it also included an announcement that converted views to actual transactions: a secret menu deal called “The $5 Missing Menu Meal” available at Arby’s locations nationwide. All fans had to do was say, “I have your TV” at the drive-thru to redeem the deal for a limited time.

What started out as a "broken TV" turned into far-exceeding results for not only Arby's, but @h1t1's TikTok page: 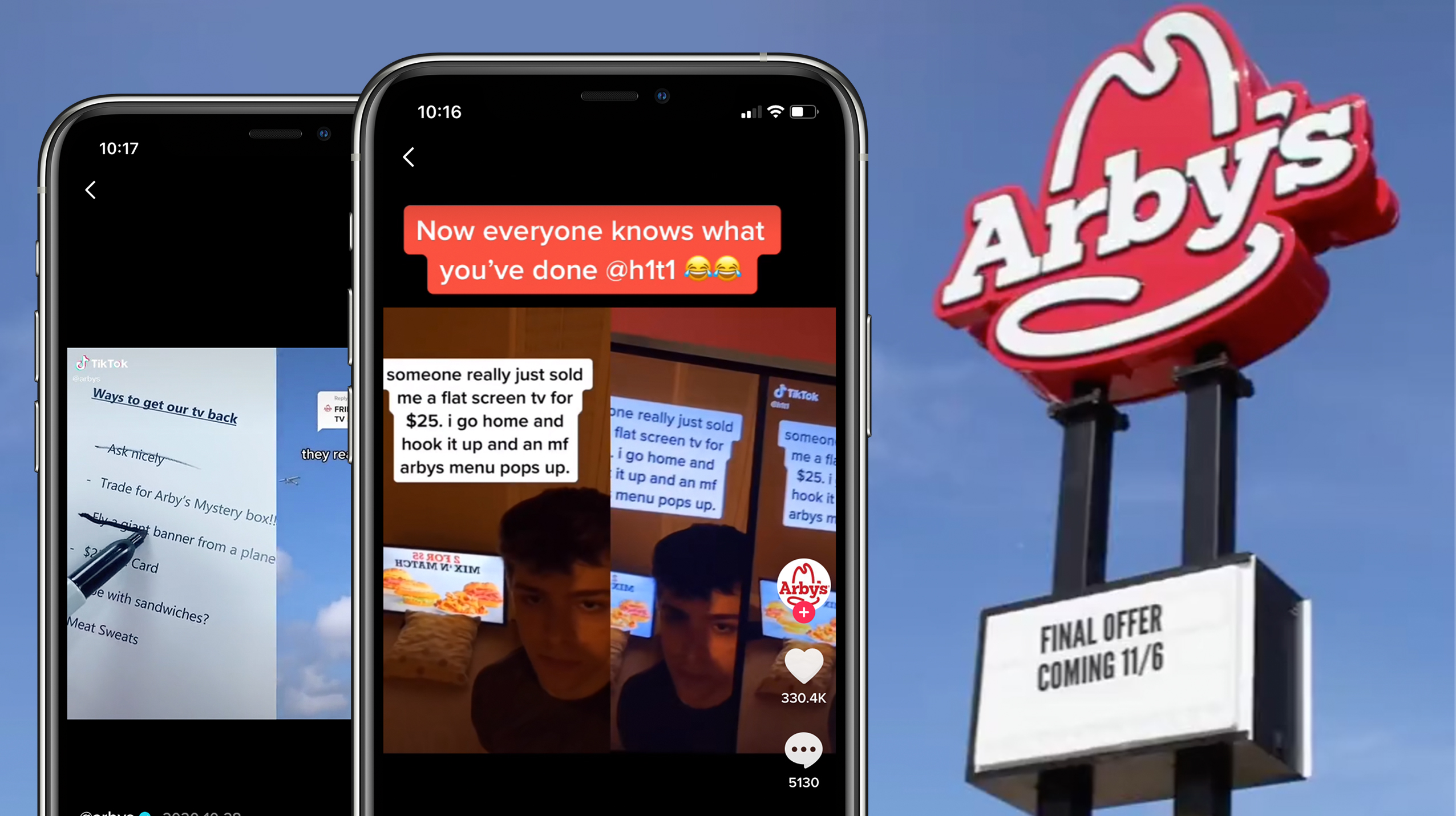 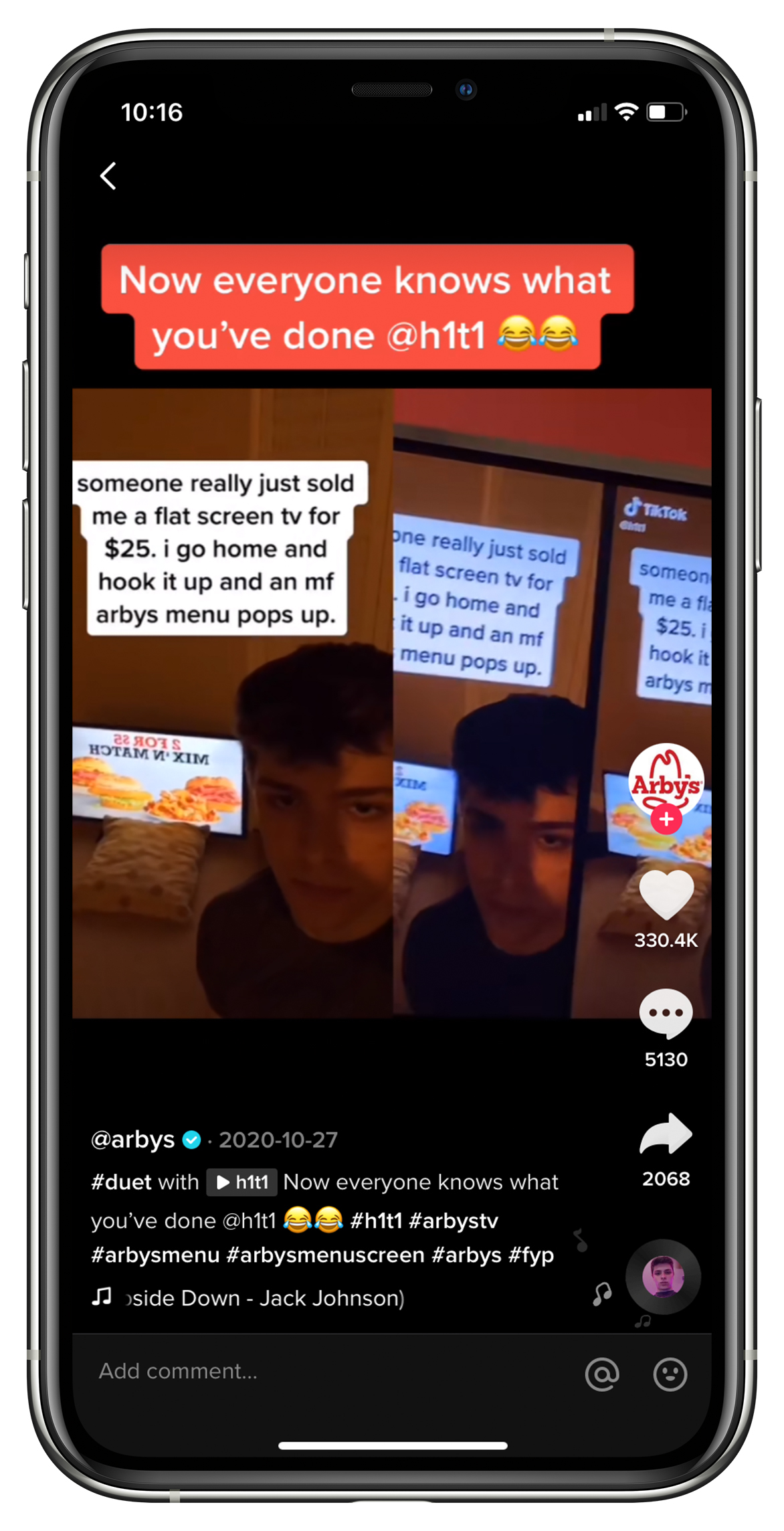 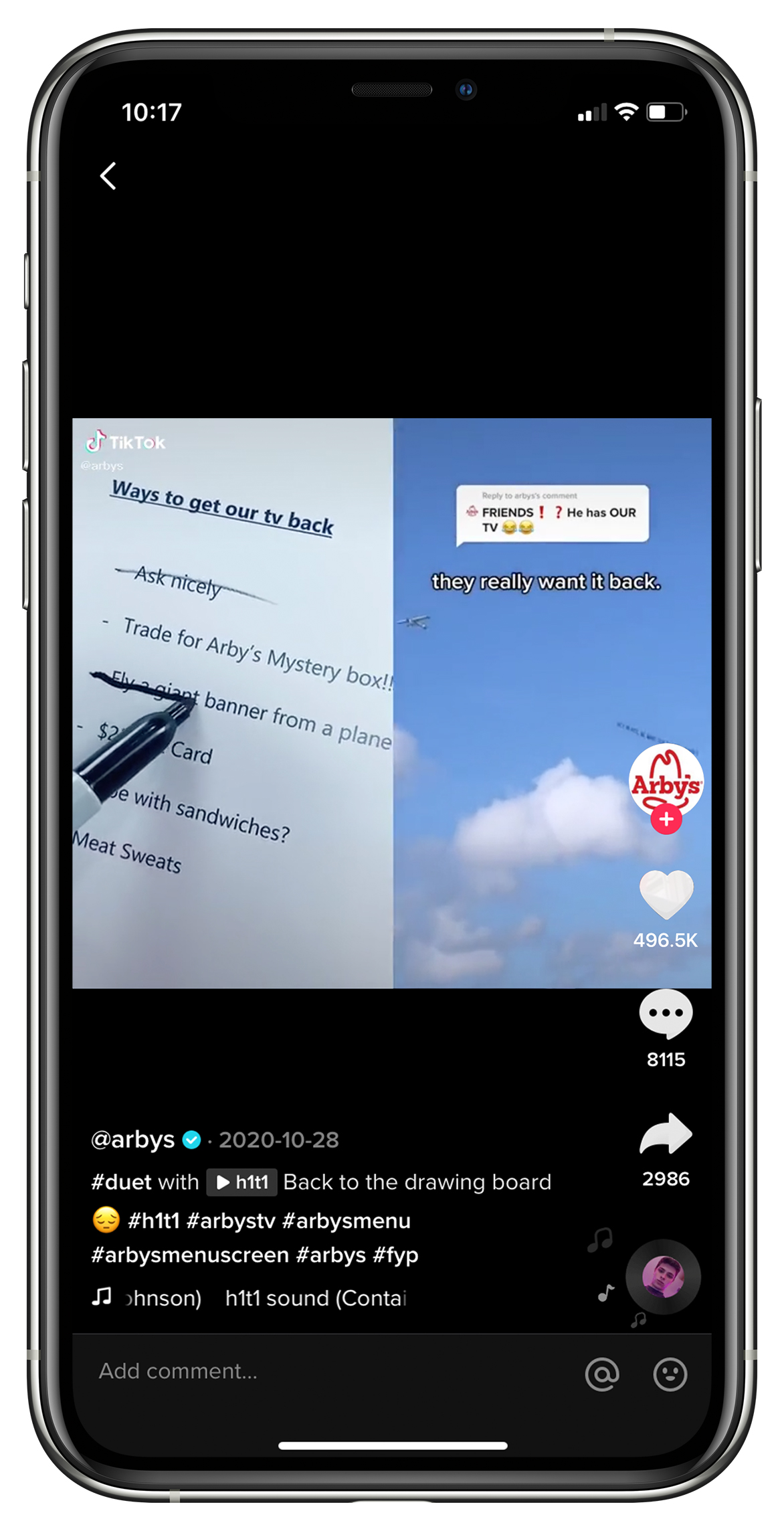 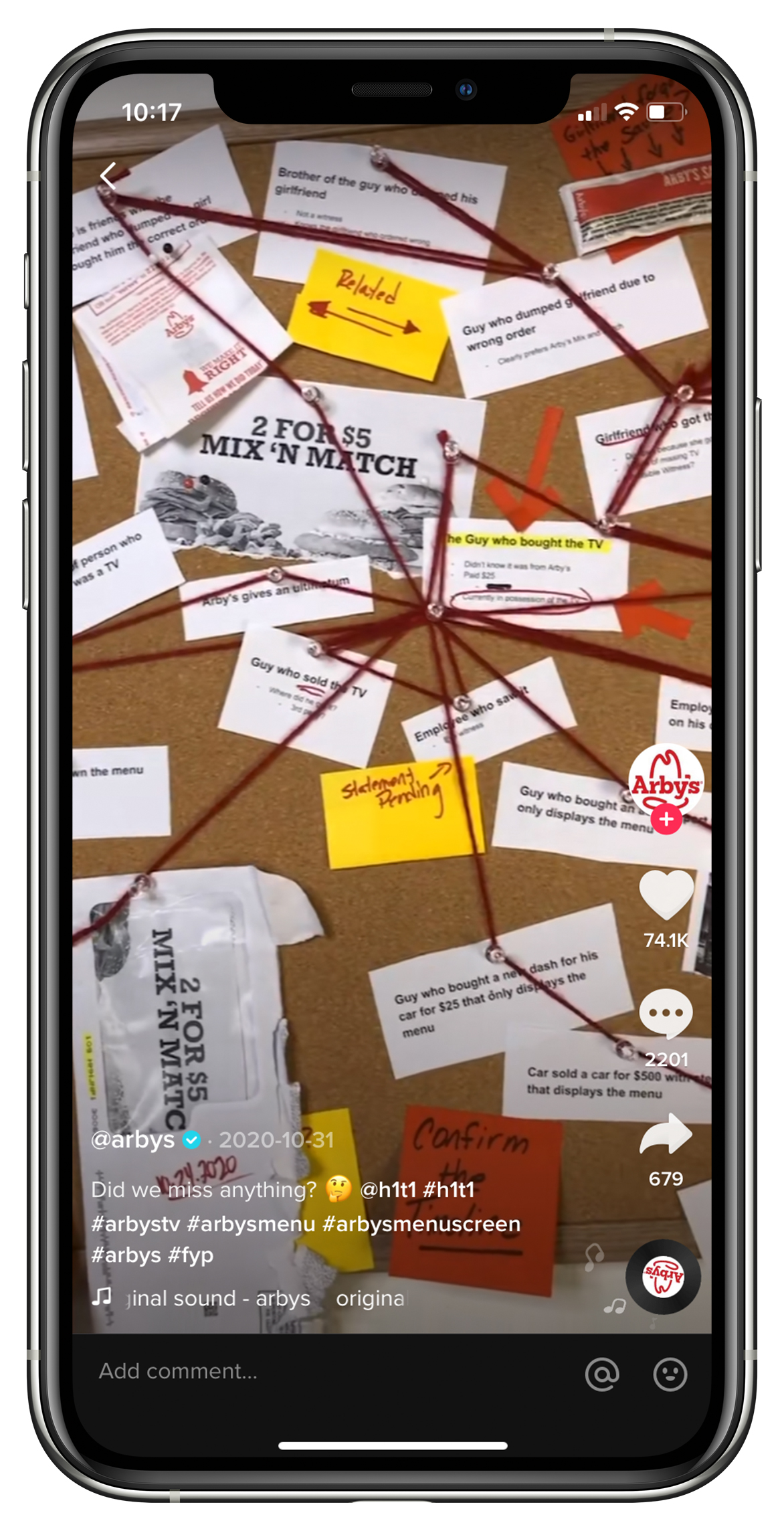 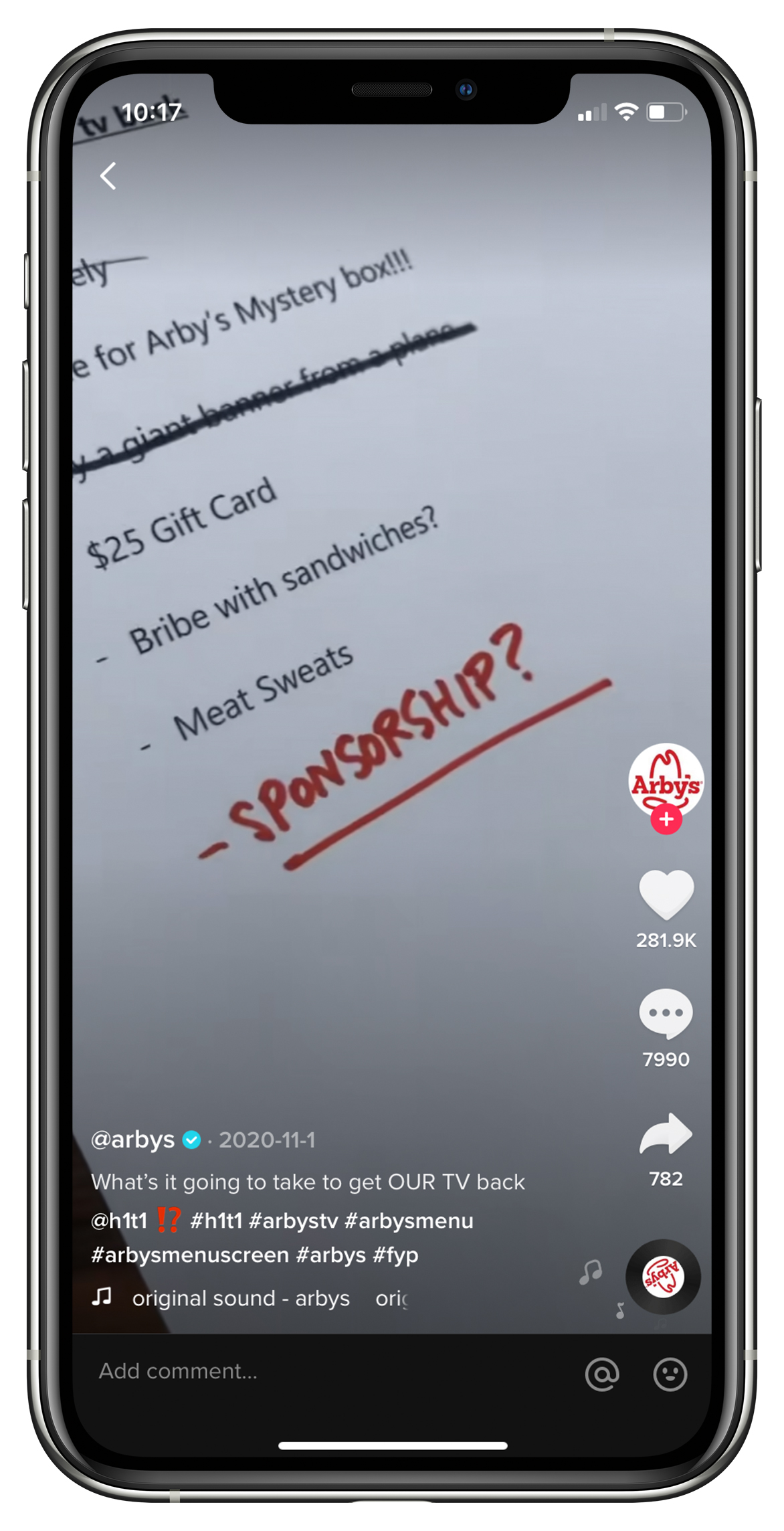 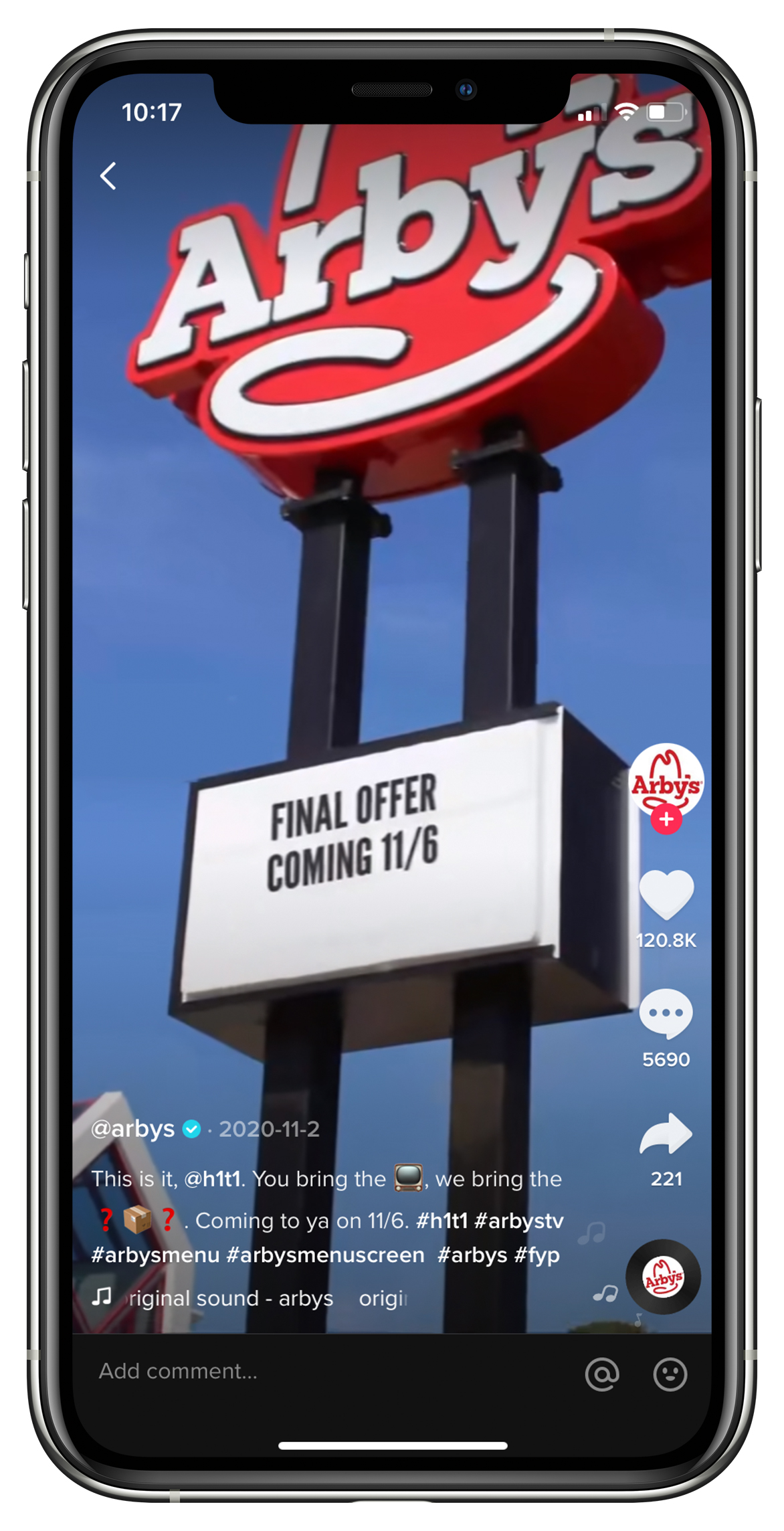 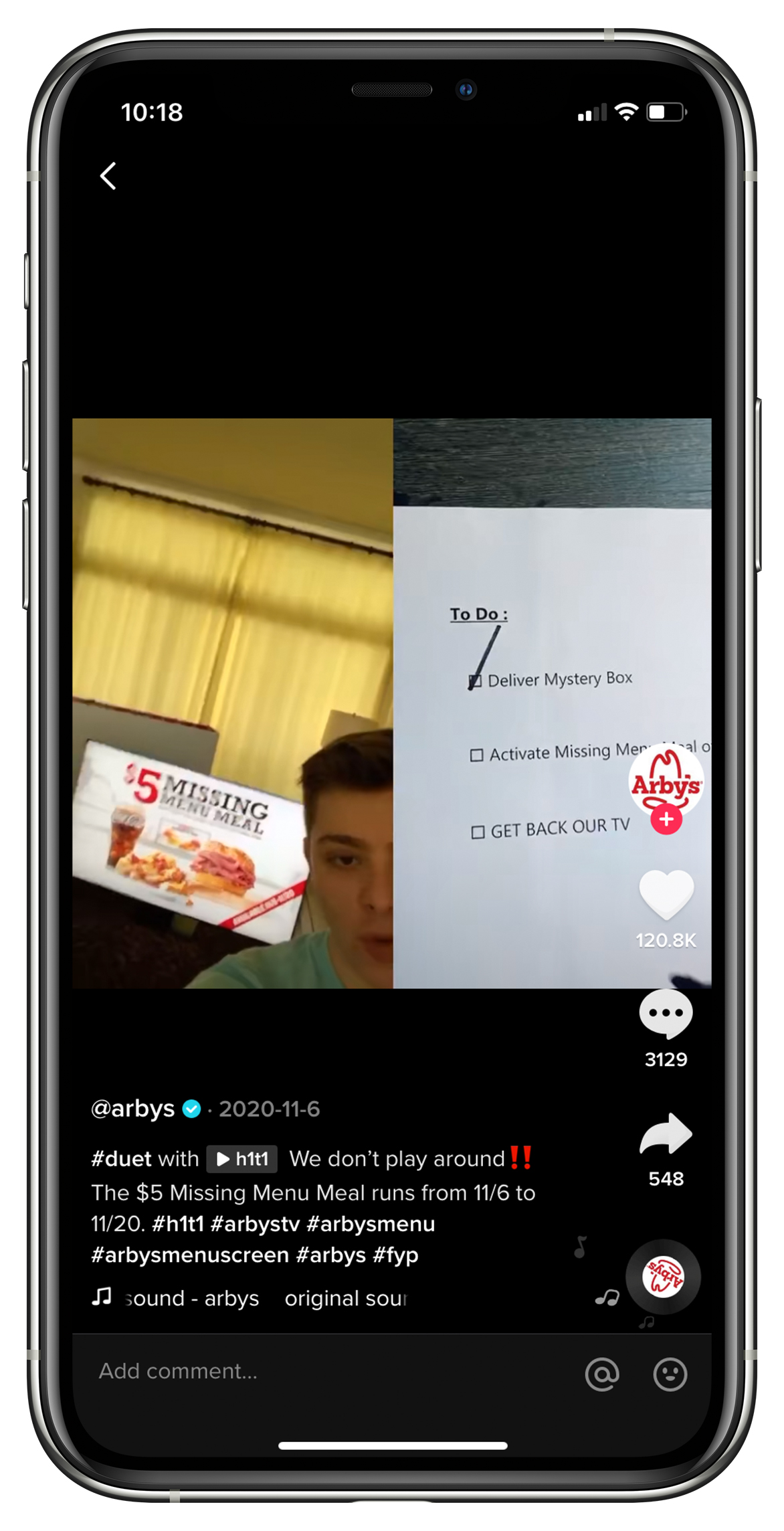