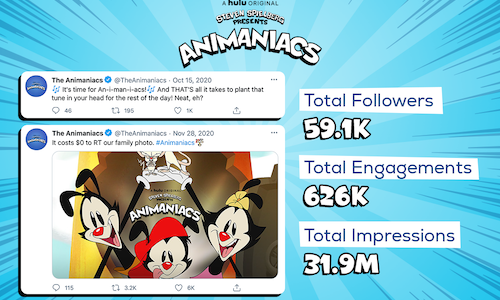 Known for its adult humor, topical themes, and witty social commentary, it’s almost as if Twitter was made for the Animaniacs. To endear audiences both old and new to the series reboot we focused our efforts on creating a fun, nostalgic, and totally insane-y environment on @theanimaniacs Twitter. How exactly would we do that? With major clip debuts, trending content, and an in-world community management strategy.

The Animaniacs had been gone a long time, so we wanted to make a memorable comeback and remind fans that it’s okay to crack a smile and have some fun. Our social voice on Twitter encapsulated the best of the Warner siblings and Pinky and the Brain. We were absurd, unpredictable, self-aware, chaotic, and of course, always plotting for world domination!

We kicked things off in October with an exclusive teaser debut at New York Comic Con and on Twitter. We took things to the max in community management recalling iconic catchphrases, highlighting our unique brand of humor, and amplifying praise and fan excitement. Fans even called out our replies, saying they “could be heard coming out of any characters' mouths.” Within 24 hours we gained over 14K Twitter followers and garnered 4M+ organic views on the clip.

We kept fans engaged with our commentary on press coverage, musings about our characters, and our use of relevant meme formats that tapped into ‘90s nostalgia. If there was a trend or popular topic of discussion, you can bet we had our own zany thoughts to contribute! Our 1:1 engagement strategy remained a priority as we heavily conversed with fans of the show, talent, influencers, celebrities, press, and Hulu’s brand Twitter.

The week of launch, we surprised fans with a Twitter Watch Party that included the exclusive early debut of Episode 1. We engaged in real-time with talent and fans as they thanked us for the Watch Party, and #AnimaniacsWatchParty ended up trending in the U.S. The Animaniacs Watch Party was the most viewed of all previous Hulu watch parties on the platform, reaching 860K unique viewers.

We continued to pay close attention to Twitter fan sentiment and let our audience conversation inform the content we created and the way we inserted ourselves into the cultural zeitgeist. This led to content such as a PSA regarding a polarizing character and emoji art tweets that honored character catchphrases — all of which became huge engagement wins for the account.

When our audience needed it the most, we made them laugh and introduced moments of levity onto their feeds. Over the course of the campaign, the @theanimaniacs Twitter grew to 59.1K followers and garnered 626K total engagements and 31.9M total impressions. Fans have continued to praise the account, calling it “the best Twitter account in the entire world,” “wild,” and “zany to the max” (the highest compliment one can give). Those are the facts! 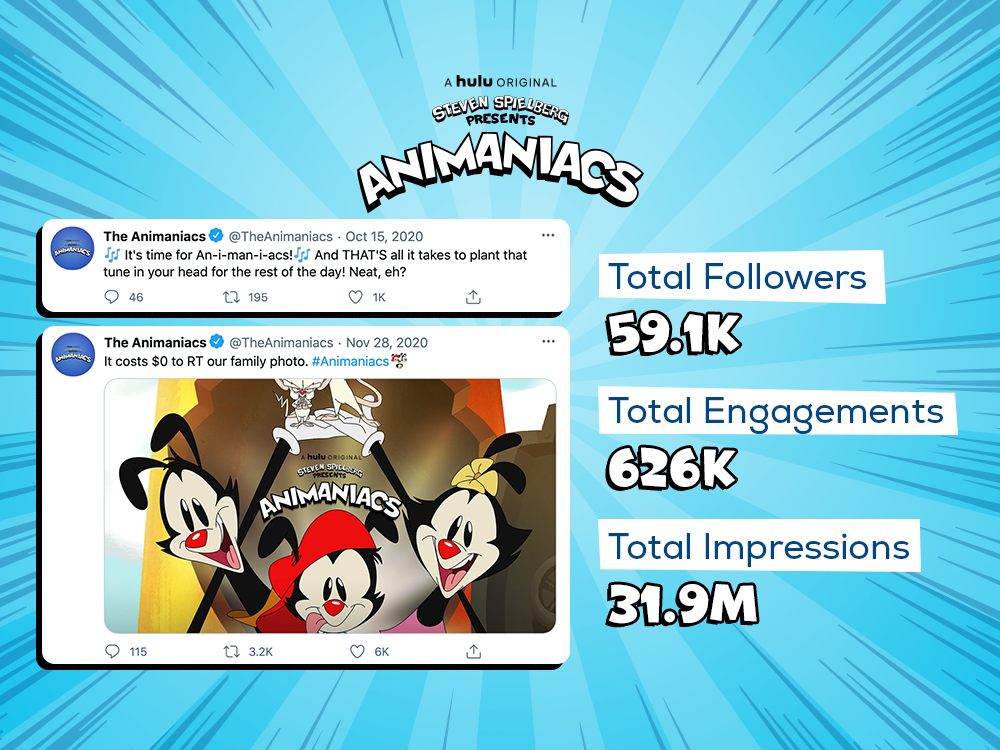 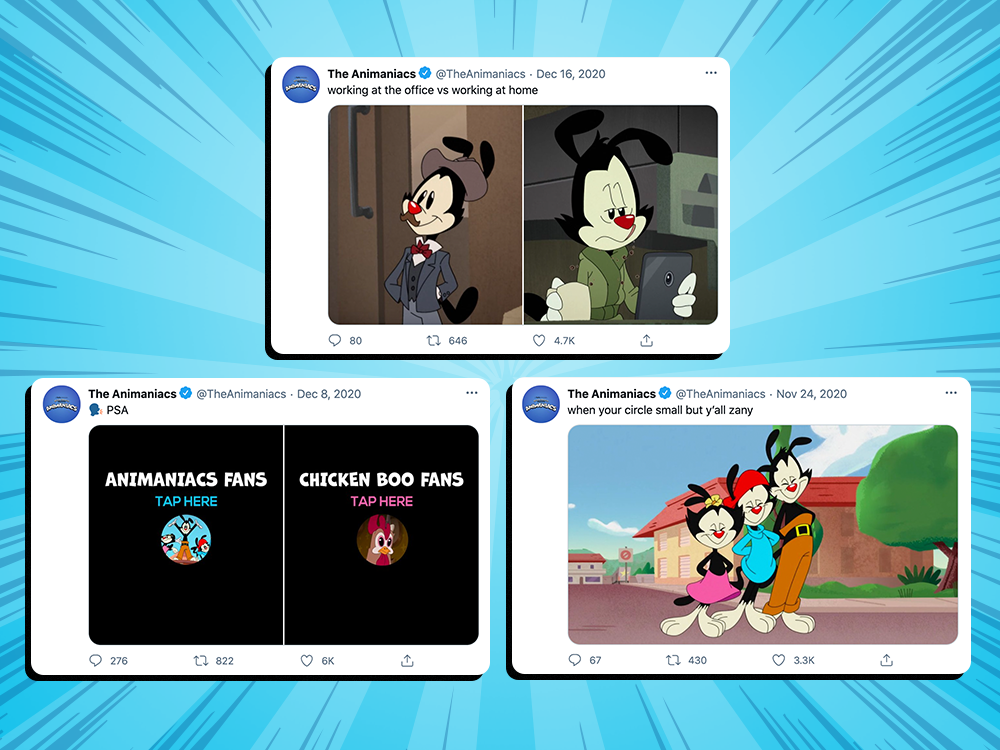 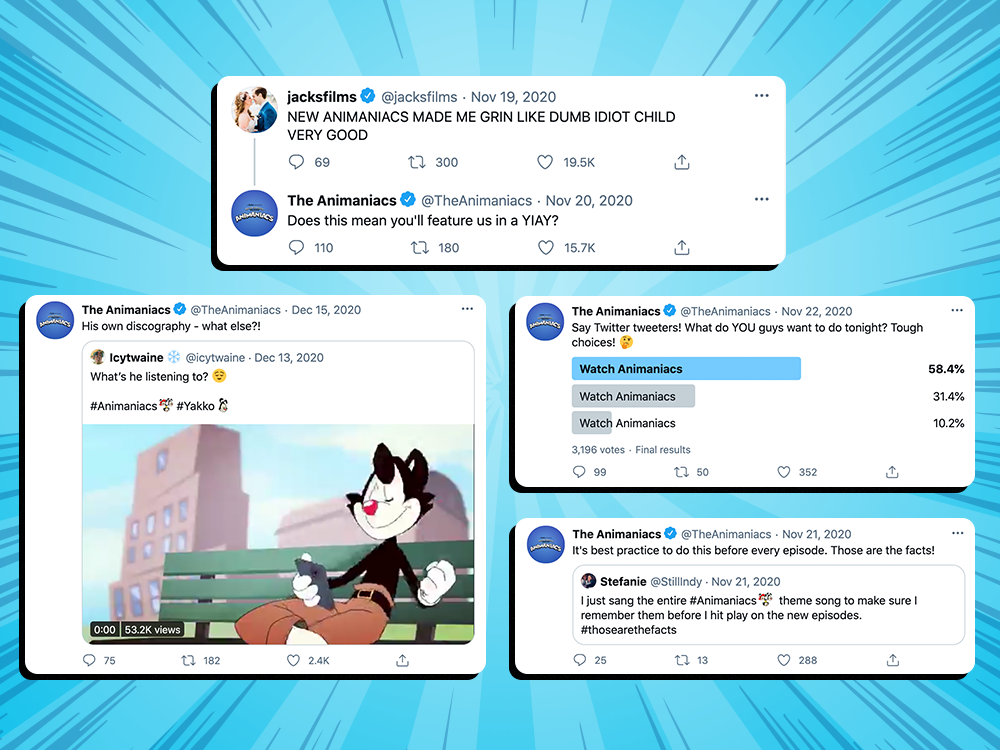 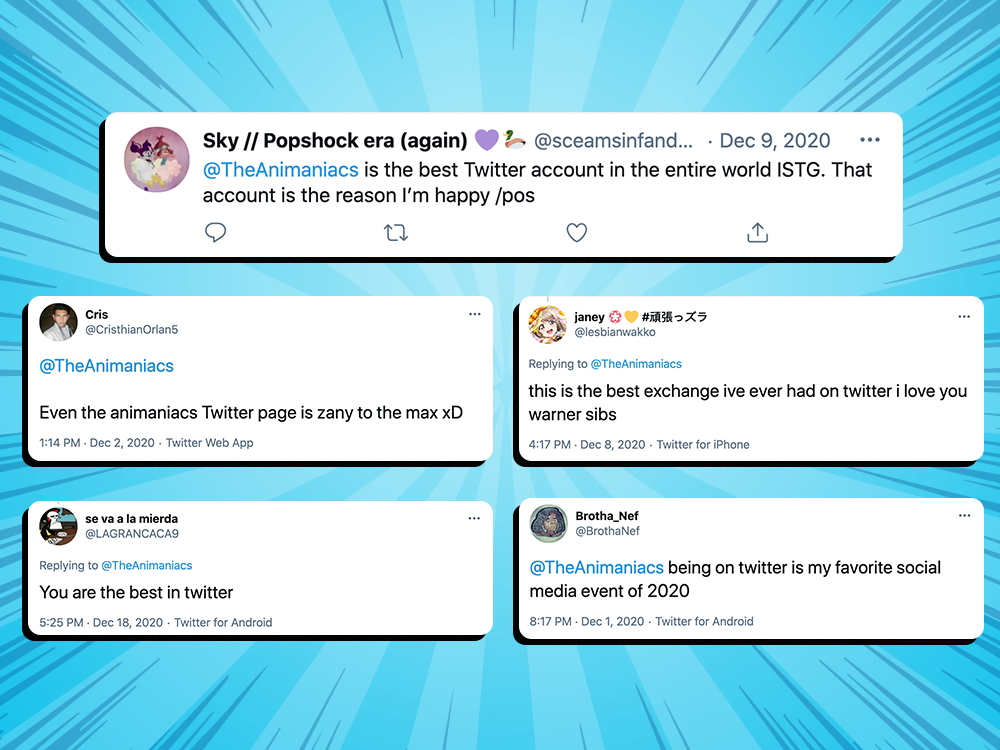