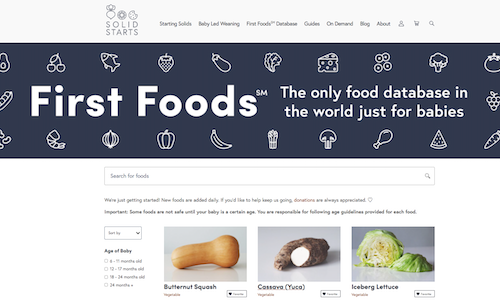 Last January Solid Starts launched FingerFoodFirst℠, a campaign to promote and brand baby-led weaning in the U.S., and to support their market entry. While many countries have adopted a “finger-food first” approach in feeding babies, the U.S. has been slow to explore alternatives to spoon-feeding. Many pediatricians are not educated on baby-led weaning nor have any experience in infant feeding and swallowing. So, Solid Starts set out to build a comprehensive, online resource on introducing real food to babies in hopes that it would make the milestone easier for families to embrace. While the benefits and "how tos" of baby-led weaning are readily available, Solid Starts is the first to coalesce them into a single platform; it also doesn't hurt that the resource is being developed by the country's leading professionals (a double-board certified pediatrician, allergist, nutritionists, dieticians, a speech-language pathologist, and two occupational therapists who specialize in the neurobiology of swallowing).

The company’s tertiary objective was to differentiate itself by reframing the controversial narrative that’s sometimes associated with baby-led weaning. The practice has been singled out for access / safety reasons, with critics claiming that it’s too time-consuming, and thus, not realistic for working families, and that it’s a gateway to choking. But Solid Starts has a much less stringent interpretation of baby-led weaning and that has really resonated with parents in the pandemic. Since going to market, the team has prioritized meeting folks where they're at and the overwhelming response suggests they're absolutely filling a market void.

Solid Starts inspires caregivers and parents to take on baby-led weaning journeys with their little ones, particularly during the physiological developmental window that exists in terms of learning how to eat (6-9 months). While the company has spent very few ad dollars to date, it leverages a digital strategy (inclusive of a highly customized marketing funnel) to drive awareness and capture its target demographic. And in just a few short months, Solid Starts has come to own the digital space by dominating organic search on Google and building awareness on social media with the promotion of its chief product—the free First Foods℠ database.

The database is Solid Starts’ greatest SEO asset. This is true because as an online archive of 1,000 foods one can introduce to a child in their first two years of life, it possesses hundreds of indexable pages. These pages are full of gorgeous food photos, videos of babies eating those foods and instructions for how to cut / prepare each by age. As an industry first, the database is also likely to be cited in the future as an authority on baby-led weaning, which’ll make it ideal for inbound marketing.

The free First Foods℠ database is currently hosted on the company's responsive website and has robust search functionality, allowing users to select foods from a number of filters (e.g., age, food type, nutrition rating, food allergy, and prep time). However, the development of a mobile application incorporating the database is underway and slated for release in summer 2021. The app will facilitate easier meal planning by allowing users to look through different foods to get ideas, and to mark those they want to try plus those their baby has tasted and their reaction.

There’s no question that the database’s free / open-access status has lent itself to going viral. In particular, instagram has played a critical role in impressing families with the product and in promoting the FingerFoodFirst℠ campaign. Solid Starts interacts on the network to:

Social media in general has been a wonderful customer service tool for the company. In fact, Solid Starts’ large and active following demands that a few staff members be dedicated entirely to listening to and answering queries from the community.

In addition to the database, SolidStarts.com is home to a large collection of feeding guides, schedules and meal plans (digital PDFs), and webinars that walk one through implementing a baby-led weaning program. Each is unique and offers detailed yet approachable information to ensure a baby is getting the nutrition needed for optimal growth, and helps prevent picky eating.

Solid Starts made great strides over the past several months, with ~1M website visits from 175+ countries coming in and zero press or marketing dollars spent.

They also became the fastest growing baby account on instagram (@SolidStarts currently has 272K+ followers and is projected to have 350K by mid-2021). Their most popular social post enjoyed 648K views on IG and 872K on TikTok. And their branded hashtags raked in ~5K impressions. What's more, is the high level of engagement the company spurs. The worst shaming happens around what we feed our kids. But Solid Starts encourages positive dialogue and that inherently attracts folks to them. They receive 15K+ weekly DMs; and while many reach out for advice, others just want to share their gratitude.

For example, there was the mom who recounted how her breastfed / baby-led weaned daughter had remarkable iron levels at her 9-month appointment. Or the physician, who despite the fact that the AAP endorses another method of introducing solids, started recommending baby-led weaning after witnessing the results with her own child. Or the parents who knew how to coach their daughter out of a potential choking scenario because of a video Solid Starts posted. Folks regularly credit the company for changing their family's mealtime dynamics because it’s from them that they learned how to empower their children to eat what they eat. Solid Starts is already influencing the way a generation of children eats and it hopes to soon impact National Health Policy. 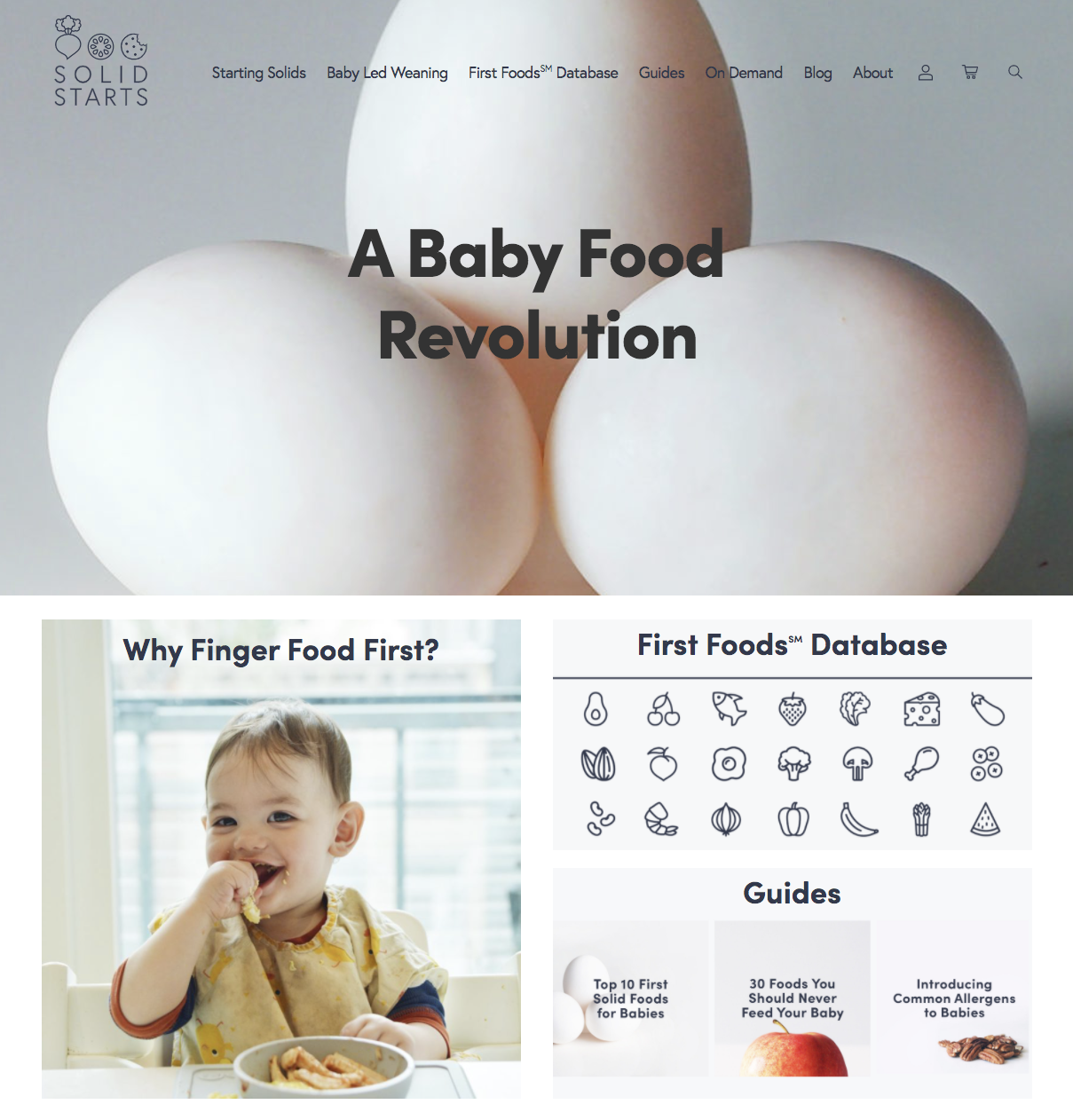 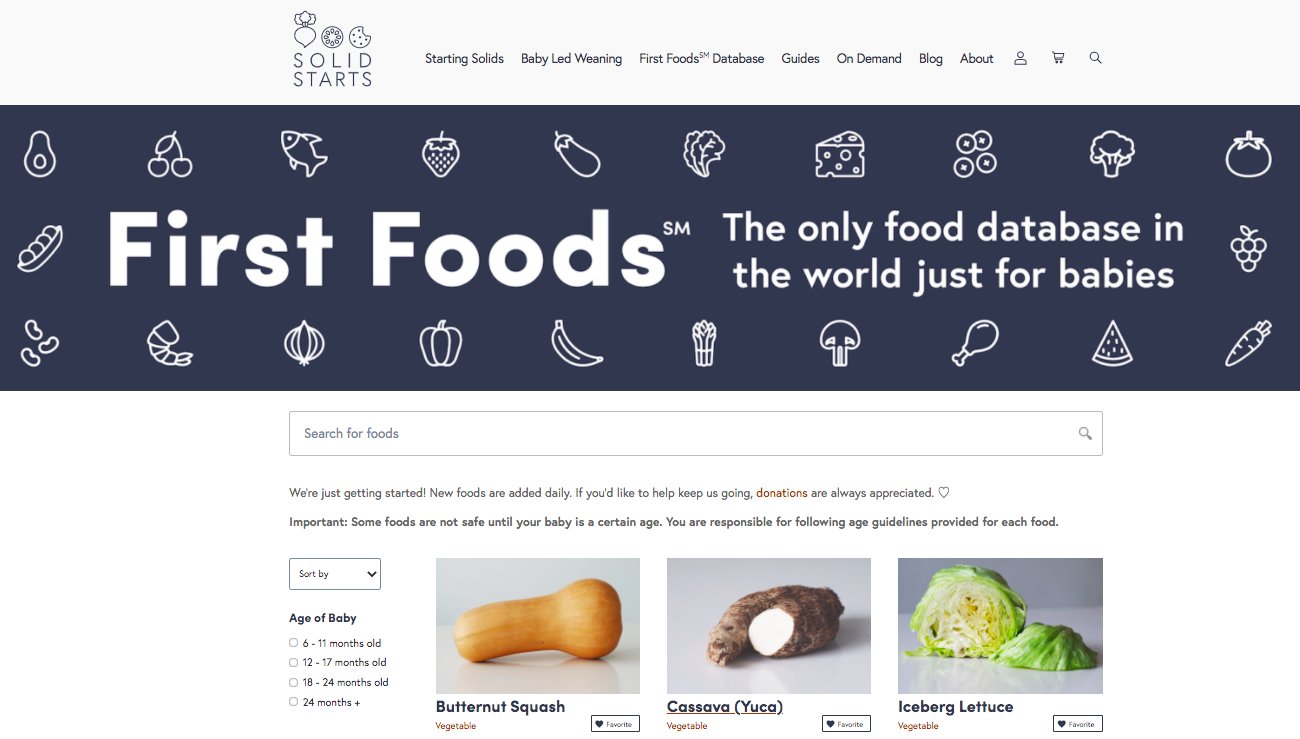