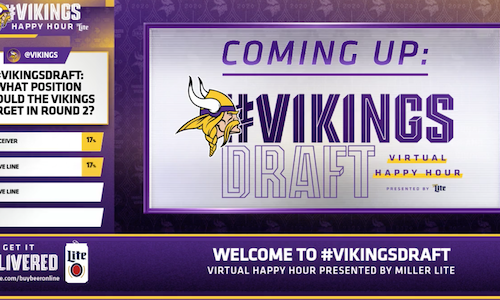 In a typical year, the Minnesota Vikings plan activations surrounding the Draft that include in-person events and rallies. The team works to produce an in-person event that has participation from Vikings players, staff, talent and partners. The Draft Party usually includes giveaways, contests and activations for fans to enjoy.

Due to the new social distancing guidelines at the time of the NFL Draft, there was a need to find ways to bring all talent, guests, and production crew together without being in the same room to produce an interactive experience for fans. Issues included video bandwidth and connectivity, audio control and distribution, and communications. The Vikings sought to create remote coverage of 2020 NFL Draft with multiple talent, guests, devices, and locations.

There was also an objective to make sure the product stood out from what others around the NFL were doing for their replacement in-person Draft festivities.

The Vikings' creative and marketing teams were faced with the unique issue of keeping fan enagegement high, while also fulfilling a partnership obligation with Miller Lite as the title sponsor. There was a need to keep everyone seperate and largely at-home to comply with COVID guidelines.

The team noted that only a few hundred people are able to participate in the in-person activities in a typical year, while the majority of fans are watching from home or from their devices. With that in mind, the team decided the best strategy for engaging fans and partnering with Miller Lite would be to create a live Vikings Draft Virtual Happy Hour Show that would stream on multiple platforms and include a variety of known Vikings talent.

Working cross-departmentally, the Vikings' creative teams reached out to talent, scripted the show, worked with vendors to create an overall engaging aesthetic and worked through the technical challenges of supporting a live broadcast. Unlike an in-person "fan rally" event that requires minimal technology, this effort was a lift by everyone on the creative teams.

The Vikings' production staff worked dilligently to create a technical run of show and stage dress rehearsals in advance. The technical engineers and audio team members found ways to support a livestream broadcast. The game entertainment staff, who normally would be heavily involved in the in-person programming of Draft Day, pivoted to help the production team work with talent. The social and digital teams promoted and executed the livestream on social platforms, as well as Vikings.com. The motion graphics team worked tirelessly to create engaging on-screen content for viewers. The marketing and partnerships team was able to take this vision and work with Miller Lite to ensure their brand was prominent in the "Happy Hour" format the show took on. This was a true group effort.

The Vikings created a one-hour live show that was streamed on multiple platforms, featuring guest commentary from analysts, former players and special guests. The show provided a tailored look at the Vikings draft class for fans who were looking for in-depth info that went beyond national broadcast coverage.

The traditional, in-person Vikings Draft party can only be attended by a few hundred people every year. The 2020 live show replacement was able to reach hundreds of thousands of people and in a new and safe way. Regardless of COVID restrictions, this will be a concept the Vikings hope to utilize moving forward. 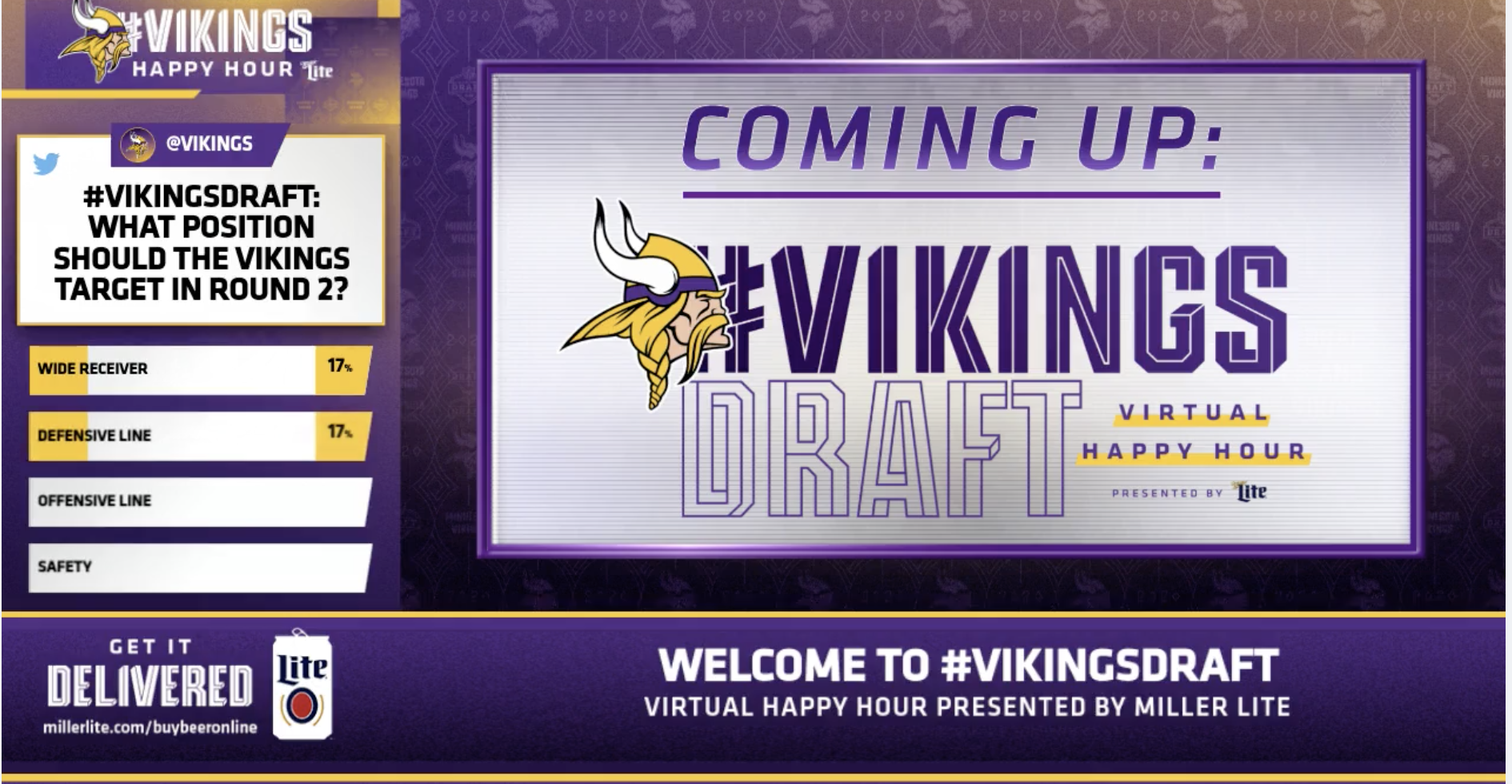