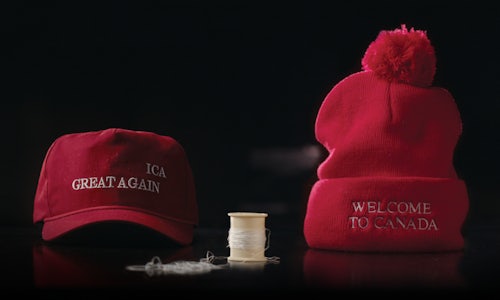 Toronto-based apparel brand Peace Collective aims to capture cultural sentiment in the clothing they sell, evidenced by items with slogans like “The Future is Canadian” and “Home is Canada”. From helping underprivileged children to aiding new immigrants to Canada, the brand uses proceeds from their sales to make a positive impact on their community.

That mission put them in a unique position to spark a conversation around a culturally relevant item of clothing: the “Make American Great Again” (MAGA) hat. Peace Collective knows the power clothing has to make a symbolic statement. It can unite us in a shared identity and express a belief or point of view. The MAGA hat is an example of that at its worst – by 2019, no piece of clothing had been as polarizing.

The brief was to create a new campaign to increase awareness and positive sentiment for Peace Collective and spark a conversation on acceptance and discrimination, while raising money for a local charity that helps new Canadians settle in. The challenge was compounded by a media budget of precisely $0.

As first- or second-generation Canadians, the Peace Collective’s founders wanted to redefine all that the MAGA hat represents and further their mission of doing good by subverting – in a uniquely Canadian way – the negativity it symbolized.

We took a MAGA hat and unstitched it letter by letter, literally unravelling its divisive message. We then used that thread to stitch a new message of acceptance – “Welcome to Canada” – onto a distinctly Canadian winter toque.

The campaign was centred on a long-form social film that captured the reactions to the contrast between the MAGA hat and Welcome to Canada toque from five new Canadians, both immigrants and refugees recently welcomed to Canada. Among the participants were Aorwa, a Syrian refugee who fled the Syrian Civil War; Cori, an LGBTQ American who now resides in Canada; and Victor, an immigrant from Uganda. The participants tell their unique stories about how they immigrated to Canada and why they are proud to call it home. The compelling accounts are intercut with footage of the unthreaded MAGA hats before revealing the “Welcome to Canada” toque.

From that one video, many more pieces of content were created and shared over three phases – the brand operates primarily through social media so the campaign was rolled out on Twitter, Facebook and Instagram. Starting with pre-launch on March 31, we shared teaser assets on social in the three days leading up to the official launch of the long-form online film and the “Welcome to Canada” toque on April 2, with the hashtag #UnravelHate.

We auctioned off the original toque made with the actual thread. Replicas of the “Welcome to Canada” toque were sold online, with profits going to WoodGreen Community Services, a United Way partner charity that helps refugees and immigrants settle into their new lives in Canada.

Inserting themselves into a politically charged conversation is not something Peace Collective, as a brand, has ever engaged in, and it could have proven to be extremely risky. However, #UnravelHate was well-received and became Peace Collective’s most successful campaign, generating the company’s highest levels of engagement across every platform.

•        Over 50 pieces of coverage on national news outlets, radio, and press in Canada and internationally

The toque was so well-received, it was made a permanent part of the clothing collection in Fall 2019. 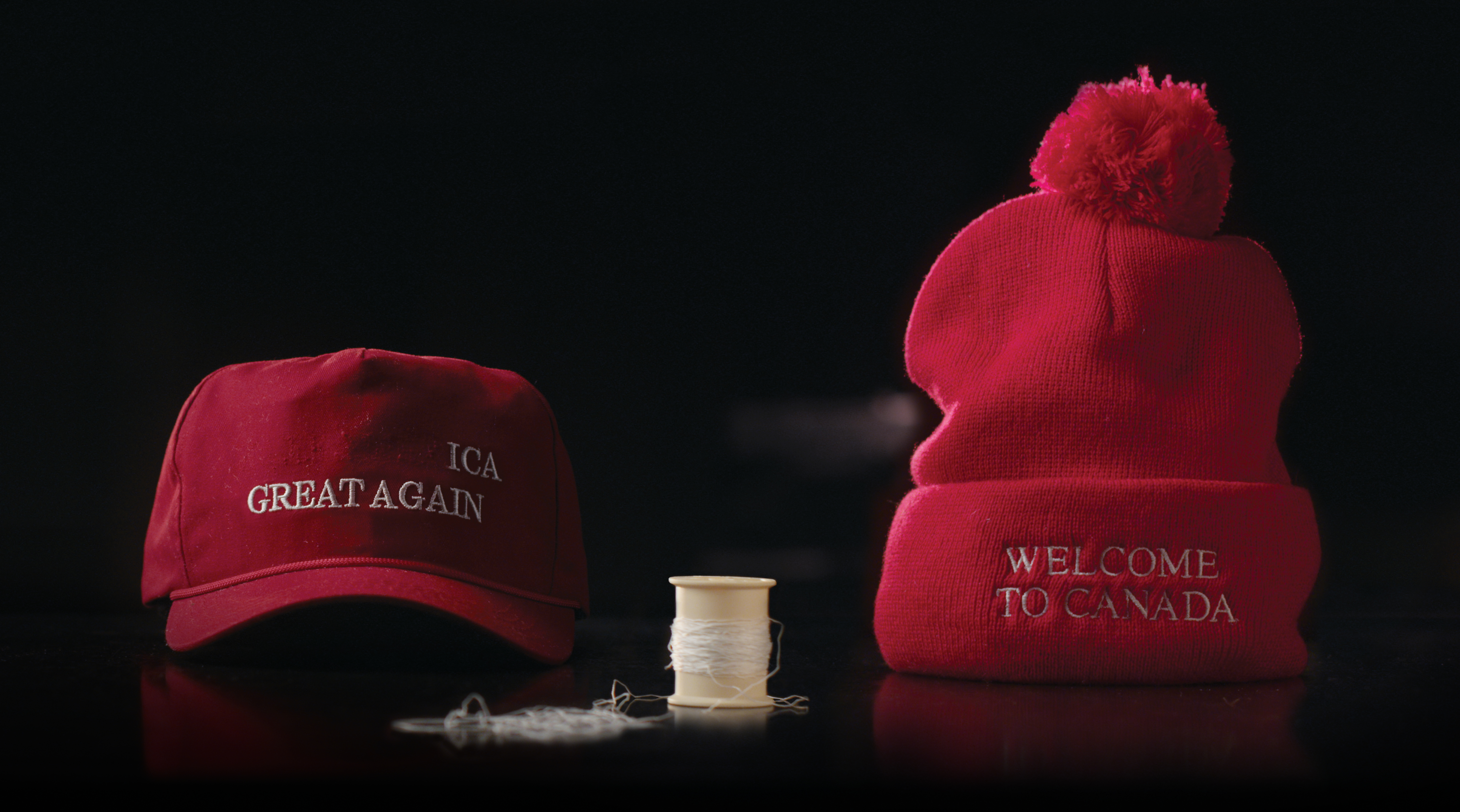 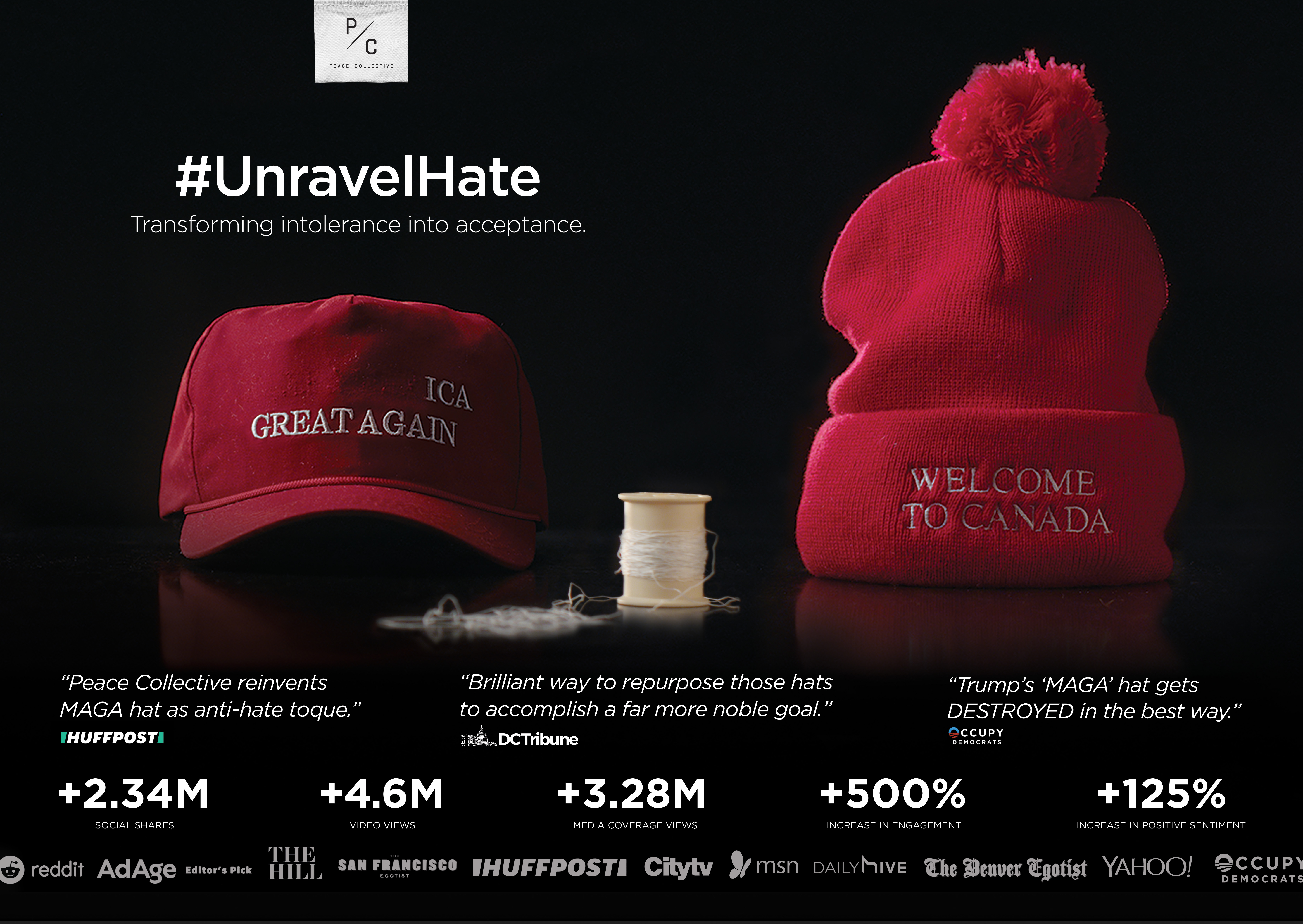