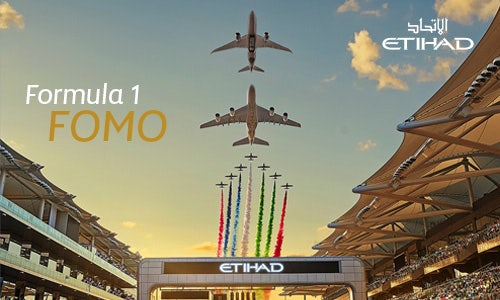 In the world of motorsports, Formula 1 is the pinnacle of racing. And in the world of Formula 1, there is no bigger race than the Abu Dhabi Grand Prix. The final race of the season, the Abu Dhabi GP often determines that year’s champion. And to celebrate, the city comes alive, creating a festival filled with music, art, and culture.

The Abu Dhabi GP is truly the UAE’s biggest event in the calendar year, and one of the best festivals the world as to offer. And as the title sponsor of the big race, we wanted anyone who wasn’t there to know what they were missing out on.

That’s why Etihad Airways invited 12 of the world’s biggest influencers to tell that story for us.

Hailing from multiple countries and backgrounds, with an array of interests and audiences, we set out to curate 12 unique weekends itineraries that showcased the incredible diversity of experiences Abu Dhabi has on offer during the F1 weekend. And through those 12 stories, we intended to create the world’s biggest case of FOMO imaginable!

The objectives were three-fold:

In order to create the world’s biggest case of FOMO, we set off to identify the right 12 influencers to invite. Four criteria were key to determining who they would be:

Based on this criteria, a weighted decision was made based on their audience size and what information was available on their demographics.

The numbers were crunched, and the decision was made! We had our list of invitees:

Invites were conditional on a variety of content requirements that differed between influencers. A strict point was also made to not interfere with the creative process at any stage. These 12 individuals built the audiences they had on their own unique forms of storytelling. We wanted to embrace that. And in the end, so did they.

Building bespoke itineraries for 12 influencers from 9 different countries isn’t the easiest task, so careful coordination between multiple internal and external stakeholders had to take place.

With each wishlist at hand, the team set about building unique itineraries for each influencer, and booking dedicated transport that would be their guide through Abu Dhabi throughout the weekend.

As the Grand Prix began, our invited influencers began to arrive. Armed with a full itinerary customised to their interests, they set forth on a weekend filled with excitement and a few surprises.

It wasn’t long before the posts started to appear. Tweets, Instagram Stories, and daily YouTube vlogs were beamed directly to their collective 32 million followers. This was sure to be a weekend they – and their audience – weren’t going to forget anytime soon!

A modest number of posts were agreed to with each influencer to ensure the word was spread about just how incredible F1 weekend in Abu Dhabi can be. However, we were surprised when almost all the influencers posted in excess of our agreements out of sheer excitement for the time they were having!

At the end of the weekend, over 330 posts had been published across multiple platforms, showcasing the incredible experiences on offer throughout Abu Dhabi and with Etihad.

By far the most successful content however came from Casey Neistat, who had the most unique experience of everyone. In addition to his weekend in Abu Dhabi, Casey returned to the United States in The Residence. He chronicled this experience on TikTok and YouTube, which to date has received a total of 19 million views between both platforms.

FOMO achieved! And with “early bird” sales for the 2020 Abu Dhabi GP soon to launch, we’ve already begun work on what’s next.

Etihad will be working with many of these influencers once again, collaborating on “flashback” content that reminds their audience of the incredible time they had in Abu Dhabi during F1 weekend.

Through a robust program of special offers tailored to each influencer’s audience, we will turn their FOMO into “let’s go!” – driving increased sales and bookings in demographics we’ve never marketed to before. And then, when these people start sharing their stories from the 2020 Abu Dhabi GP, that global sense of FOMO will only grow bigger! 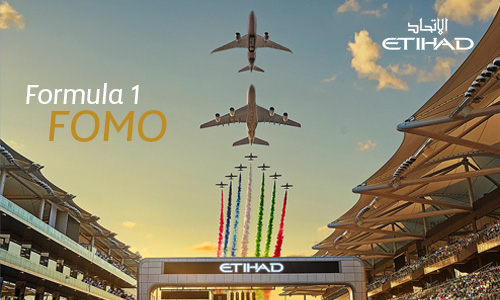