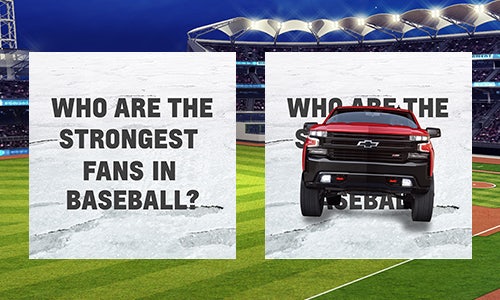 The Strongest Fans in Baseball

“Baseball, Hot Dogs, Apple Pie and Chevrolet,” are more than lyrics to a popular ad in the 70s, but a truism that Chevy and baseball go together. Chevrolet, being one of the oldest automotive companies in the country and Major League Baseball, home to America’s Pastime, share a lot in common; they value family, tradition, hard work and above all, optimism for the future.

MLB has boosted its overall viewership by adapting to social media and entered their second year of partnership with Twitter. The social media platform sees MLB’s Opening Day as the most active sporting event of the year with more than six billion Tweets in a 24-hour period.

With the launch of the strongest, most advanced Silverado ever, we needed to create something totally out of left field to continue to build the storied relationship.

Introducing the strongest, most advanced crowd meter ever. Playing off of the well-known crowd meter at stadiums that gauge how loud fans are, we created a social media campaign that used hashtag data in a new way. We tallied fans using official team hashtags to determine who had the strongest fans in baseball.

We prepared a cadence of Tweets for ourselves, MLB and our ten partner teams that encouraged engagement from fans while reminding them that these stats could only be brought to them by the Chevy Silverado. On the eve of Opening Day, we posted a teaser that introduced the concept of the hashtag battle. The next morning it was game day and we posted updates throughout regarding which fans were making the most social media noise.

As the final out was recorded of the night-game, we pushed the end of day recap that showed the strongest fans on Opening Day were the New York Mets, followed by the Philadelphia Phillies and the Chicago Cubs in third.

Overall the Strongest Fans in Baseball was a grand slam. Our 18 partner posts received over 1.2 million organic impressions. In total, our videos earned 255 thousand views across multiple Twitter handles. This was all accomplished without any paid media.

We tapped into a cultural moment with creative content and use of data unlike any other Opening Day campaign ever on social media. And not to our surprise, by entering the conversation of America’s Pastime we saw 98% positive sentiment, which is exactly the kind of ball game everyone can enjoy.

Video for The Strongest Fans in Baseball 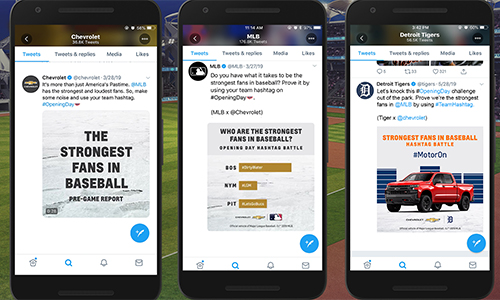 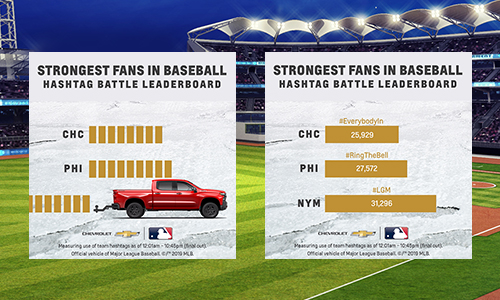 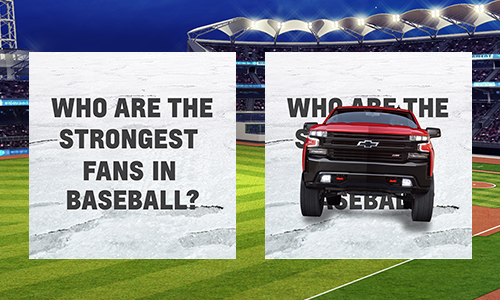