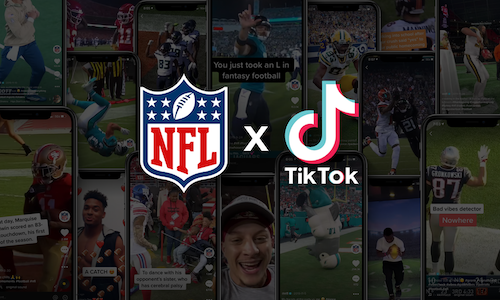 The NFL on TikTok

With the NFL looking to reach younger fans, partnering with TikTok was a natural step, but the unique nature of the platform – and its hard-to-reach Gen Z audience – presented a challenge.

In surveying the landscape, we didn’t feel that any sports brand had yet approached TikTok properly.

Most had used TikTok as merely an opportunity to add music to highlights or to re-purpose raw funny moments that worked just as well on any platform. Maybe they’d throw a few extra mascot videos into the mix.

They used TikTok as a content-sharing platform, ignoring that much of the TikTok experience – the video styles, the trends, the way its young users consume content – is driven by its nature as a content-creation hub.

No one was making quality original content for TikTok.

We wanted to do it differently. We didn’t want to just post on TikTok, but to actually make TikToks – video content that was authentic and unique to the platform, that felt natural in a feed full of silly but clever content produced almost exclusively by teenagers on cell phones.

Essentially, we wanted to stand out – from other sports brands – by fitting in to the TikTok community.

Beyond raw moments that would perform on any platform, our three primary video categories were emotional storytelling, highlights and trend-based content. Having seen emotional videos blow up on TikTok all the time, we were confident those would succeed for us. The other two buckets were trickier.

Highlights weren’t going to inherently perform like they do on Instagram and Twitter. With so many views coming on the “For You” page and often coming days or weeks after posting, many viewers would be either non-football fans or football fans who’ve already seen the highlight.

So we had to make the videos enjoyable for more than just the play itself. With clever use of sound, we could make gold even out of highlights that weren’t worthy of posting on other platforms.

On one play that we didn’t even post on NFL Instagram, Leonard Fournette runs right, cuts left, cuts right again and finally back to the left. After some racking of the mental music archives, we took the song “Stretch Out and Wait” by The Smiths and looped the lyric “This way and that way – this way, that way” a couple times.It’s generated 1.2 million views, over half from the “For You” page.

As for trends, we looked to participate in ways that weren’t too forced or off the mark of football content. If we were going to join in, our take had to be clever and additive, lest we receive the dreaded “Hello, fellow kids.”

One of our first attempts was on a trend set to “Midnight City” by M83 in which videos featured some popular young person giving advice to an unnamed child, who was then revealed to be an older celebrity that had twisted that advice and taken it to the extreme.

We interspersed footage of JuJu Smith-Schuster and Peyton Manning to match the story arc, posted it and hoped we wouldn’t be bombarded with comments of “Silence, brand.”

One of the top comments called it “legit the greatest video of all time.”

And if you click the sound and scroll through the videos, you’ll see a 100-year-old brand fitting naturally in a stream of teenagers messing around on their cellphones. Exactly what we’d set out to do. No matter how creative the programming, though, we knew merely launching a league account wasn’t a strong enough push for the NFL on TikTok.

After a couple weeks of experience populating our account, we presented to all 32 teams a set of guidelines, best practices, examples and inspirations. At varying paces, most teams got to work – and continually wowed us with their creativity.

We assisted in making content to help prominent players launch their channels and were able to get five star players on the platform by the end of the season: Tom Brady, Russell Wilson, JuJu Smith-Schuster, Jamal Adams and Tarik Cohen.

And we reached out to influencers to help fuel two of our three organic hashtag trends, #WeReady around kickoff and #TouchdownCelebration during Super Bowl Week.

By the numbers, our launch on TikTok was a huge success.

From our launch on Aug. 29 to the end of 2019, NFL was the fastest-growing sports league account on the platform, according to TikTok.

By Super Bowl Sunday – five months from our launch – we had amassed 2.5 million followers and generated 403.7 million video views, an average of 18.0 million views per week.

Over 40 percent of our videos have generated at least 1 million views.

29 of our 32 teams were on the platform, with an average of 234,000 followers per team, and we on-boarded five NFL stars – Tom Brady, Russell Wilson, JuJu Smith-Schuster, Jamal Adams and Tarik Cohen – a success considering starting an account mid-season was a big ask of a player. Additionally, six mascots had started accounts, along with one cheerleading squad and one stadium (Gillette).

Our organic hashtag trends have been successes, too, helping expand our reach even further. According to TikTok, of the 300+ organic hashtags run on platform in 2019 in the US, total video views for #WeReady were in the top 5% after one week.

Qualitatively, the feedback has been great as well, from the surprised – "why does the nfl actually make good tiktoks i'm here for this" – to the enthusiastic – "IF COMPANIES ARE GOING TO JOIN TIKTOK THEY GOTTA DO IT EXACTLY LIKE THIS. GREAT VIDEO NFL" – to our personal favorite - "whoever runs this account should get a raise." 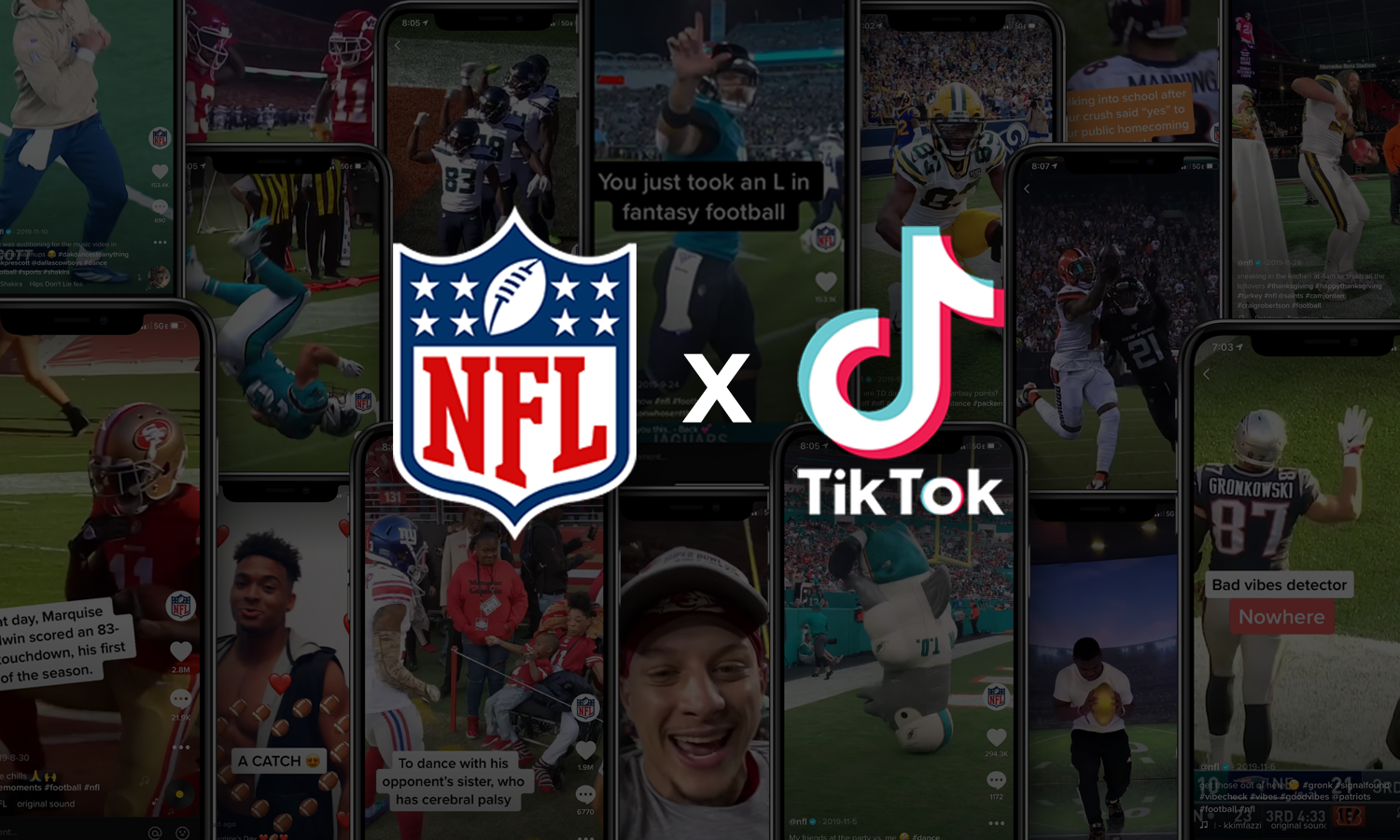 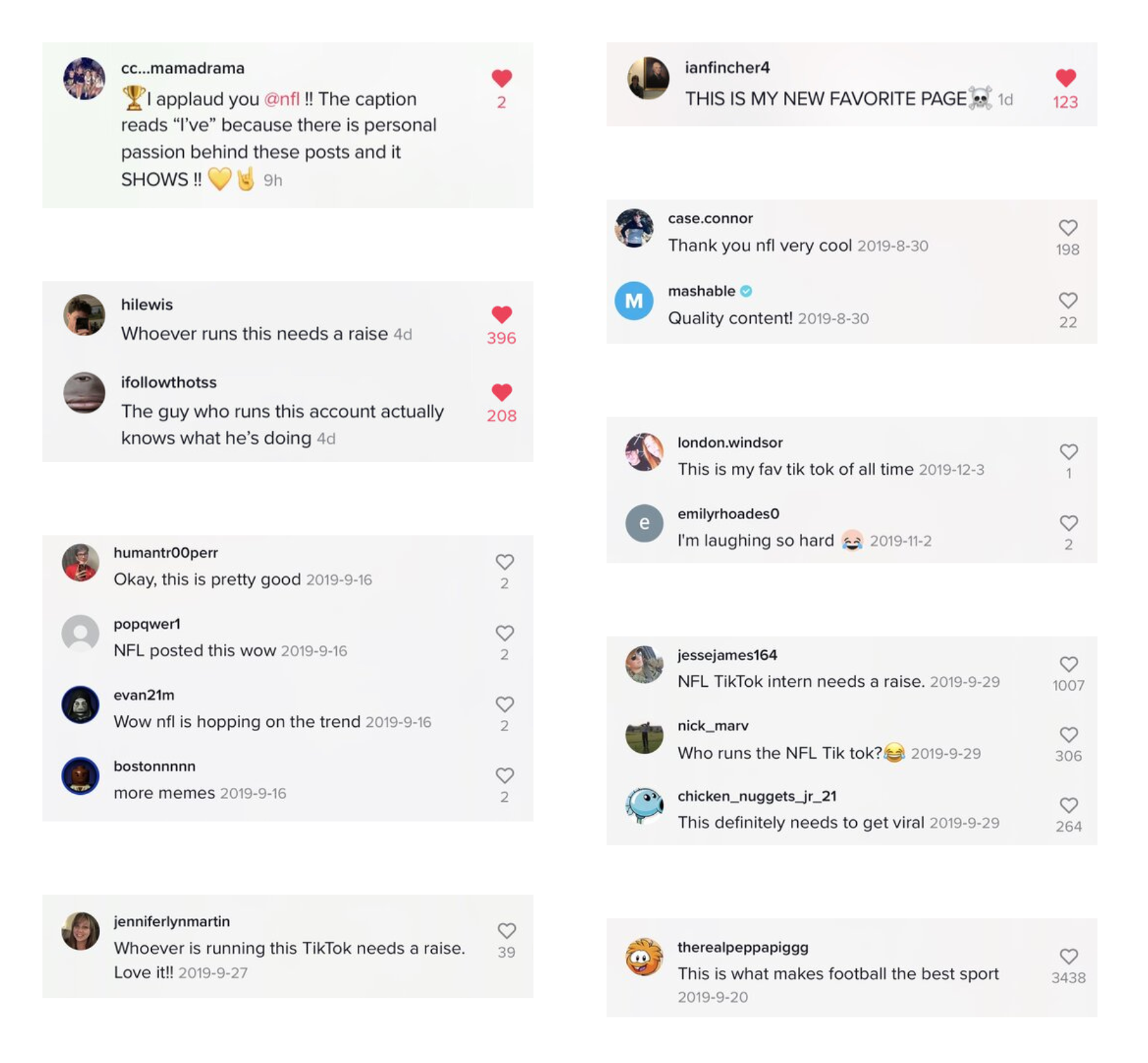 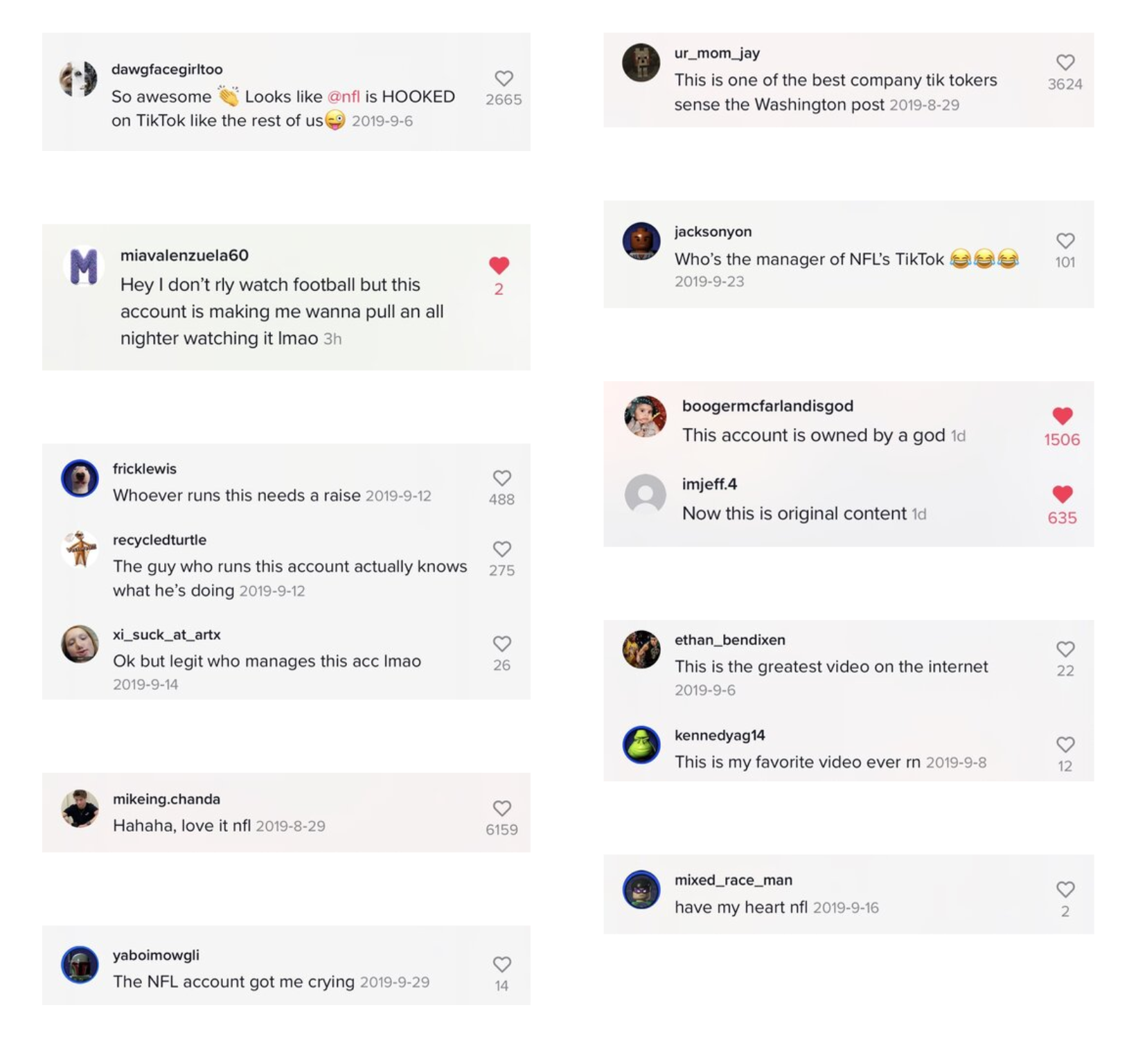 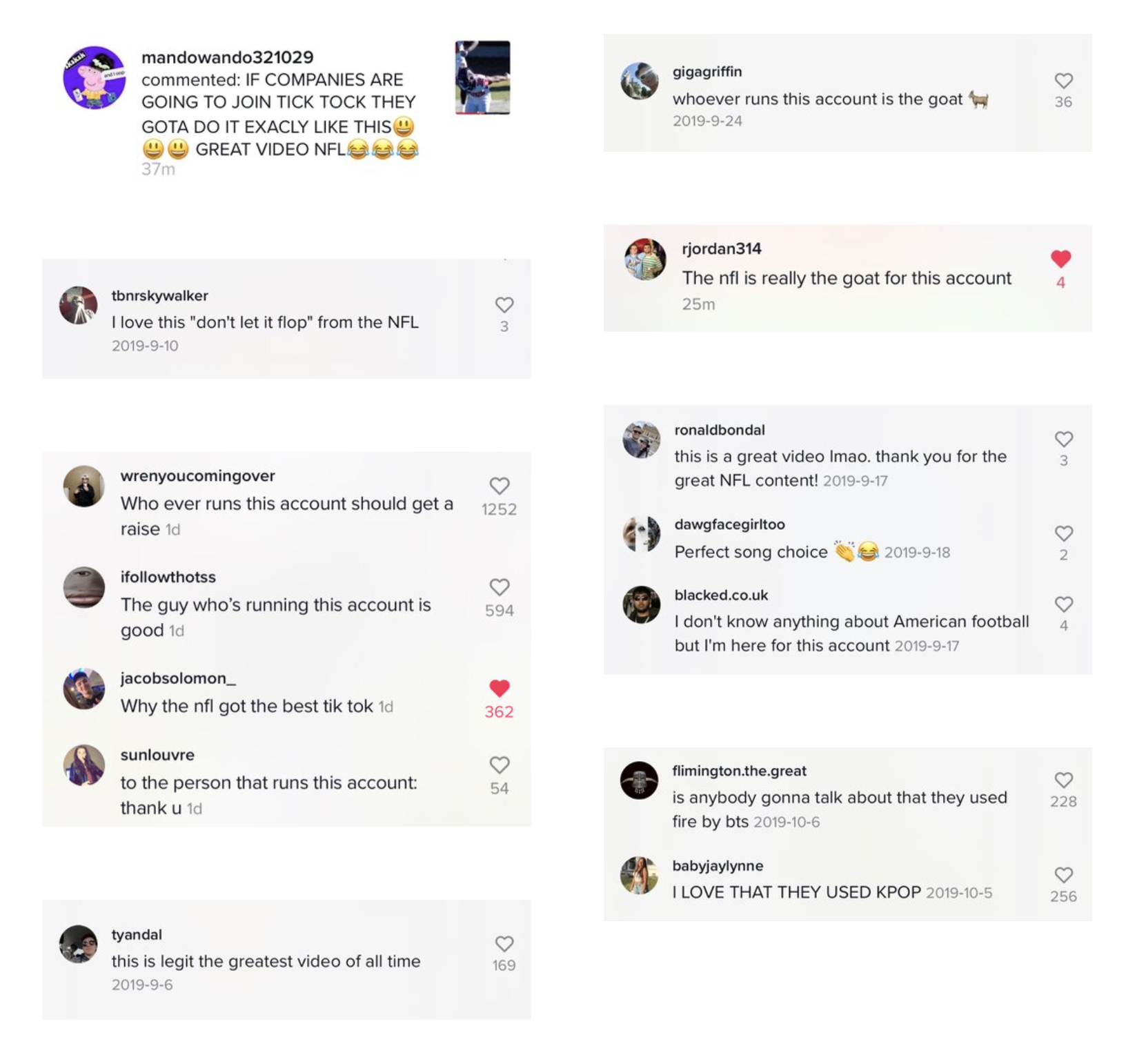